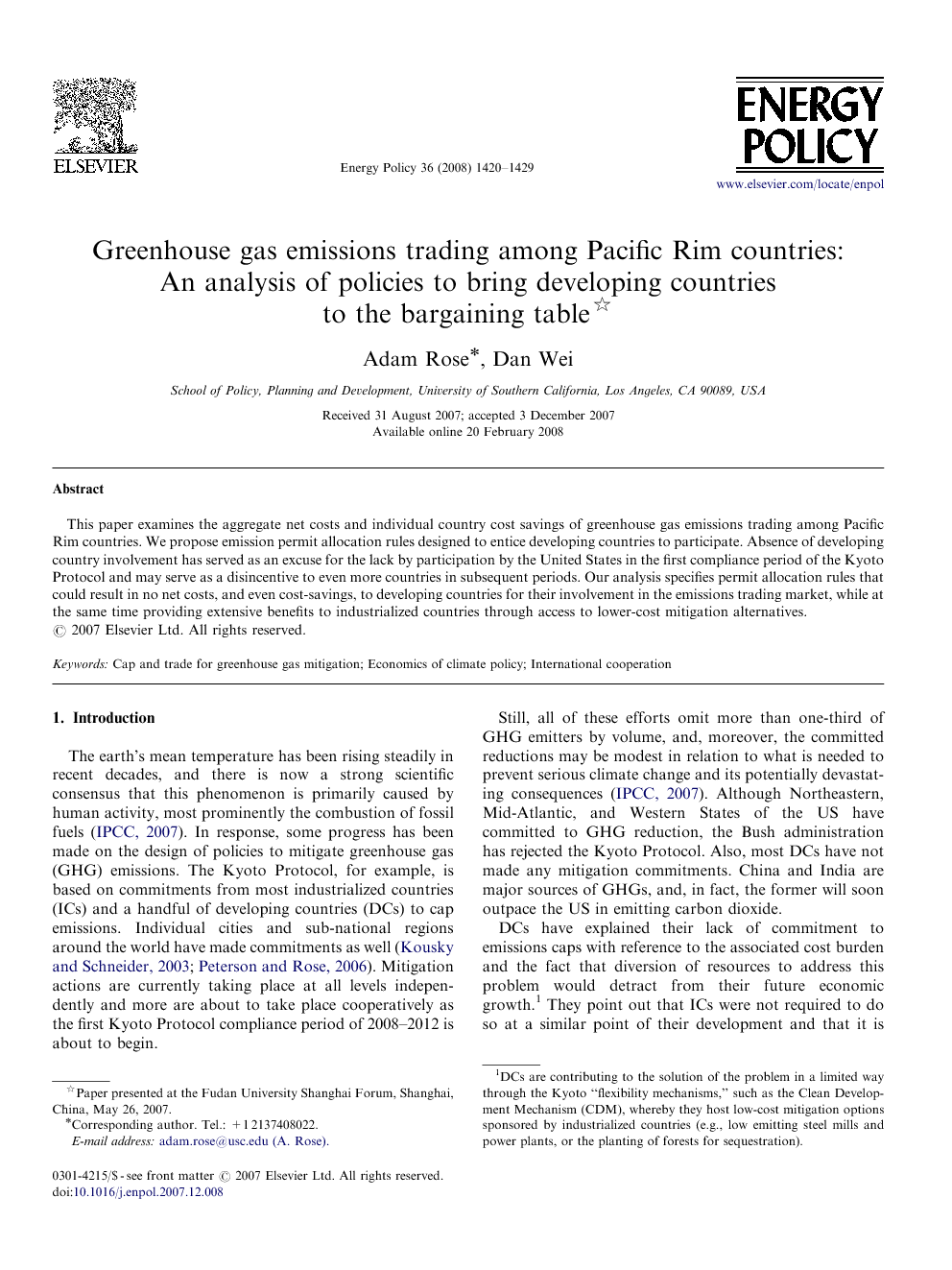 This paper examines the aggregate net costs and individual country cost savings of greenhouse gas emissions trading among Pacific Rim countries. We propose emission permit allocation rules designed to entice developing countries to participate. Absence of developing country involvement has served as an excuse for the lack by participation by the United States in the first compliance period of the Kyoto Protocol and may serve as a disincentive to even more countries in subsequent periods. Our analysis specifies permit allocation rules that could result in no net costs, and even cost-savings, to developing countries for their involvement in the emissions trading market, while at the same time providing extensive benefits to industrialized countries through access to lower-cost mitigation alternatives.

The earth's mean temperature has been rising steadily in recent decades, and there is now a strong scientific consensus that this phenomenon is primarily caused by human activity, most prominently the combustion of fossil fuels (IPCC, 2007). In response, some progress has been made on the design of policies to mitigate greenhouse gas (GHG) emissions. The Kyoto Protocol, for example, is based on commitments from most industrialized countries (ICs) and a handful of developing countries (DCs) to cap emissions. Individual cities and sub-national regions around the world have made commitments as well (Kousky and Schneider, 2003; Peterson and Rose, 2006). Mitigation actions are currently taking place at all levels independently and more are about to take place cooperatively as the first Kyoto Protocol compliance period of 2008–2012 is about to begin. Still, all of these efforts omit more than one-third of GHG emitters by volume, and, moreover, the committed reductions may be modest in relation to what is needed to prevent serious climate change and its potentially devastating consequences (IPCC, 2007). Although Northeastern, Mid-Atlantic, and Western States of the US have committed to GHG reduction, the Bush administration has rejected the Kyoto Protocol. Also, most DCs have not made any mitigation commitments. China and India are major sources of GHGs, and, in fact, the former will soon outpace the US in emitting carbon dioxide. DCs have explained their lack of commitment to emissions caps with reference to the associated cost burden and the fact that diversion of resources to address this problem would detract from their future economic growth.1 They point out that ICs were not required to do so at a similar point of their development and that it is hypocritical for ICs to press them on this issue. In turn, ICs point to the increasing contribution of DCs to the problem. Many of them feel besieged by cheap imports from DCs and note that IC competitiveness in international markets will further deteriorate if DCs do not shoulder some of the cost burden.2 The purpose of this paper is to illustrate how ICs and DCs can engage in a mutually beneficial, cooperative effort to address the climate change problem through the policy instrument of GHG emissions trading. This approach holds the prospect of greatly reducing the overall cost of achieving GHG emission reductions. This is accomplished by issuing and then allowing the trading of emissions rights, so that countries with relatively high mitigation costs can purchase permits from countries with relatively low mitigation costs, thus ensuring a least-cost solution. All countries gain from the exchange. Permit purchasing countries avoid high-cost expenditures, and selling countries reap permit revenues to more than offset the increase in mitigation they take on as they sell permits (see, e.g., Barrett et al., 1992; Tietenberg, 2003). From most equity standpoints, conditions underlying the situation work in the right direction—DCs have relatively more low-cost mitigation options, and hence the transfer of monetary payments moves from relatively rich to relatively poor countries. Moreover, equity can be fine-tuned by the negotiation process according to political considerations and/or various equity principles (Rose and Stevens, 1998). Equity objectives are implemented by the inter-country distribution of permits (and hence initial emission caps, or quotas) according to burden-sharing rules that correspond to the equity principles (Rose et al., 1998). In fact, the policy instrument can be designed in such a manner as to yield no harm or no risk to DCs, if they are allocated a sufficient number of permits. Still, this represents meaningful involvement of DCs that can significantly reduce IC compliance costs by offering them lower-cost alternatives. More specifically, this paper will examine the aggregate net costs and individual country cost savings from both the perspectives of cost-effectiveness and fairness of GHG emission trading among Pacific Rim countries.3 This is a geographic area of great significance, consisting of 44 percent of the world's population, 61 percent of its energy use, and 60 percent of its GHG emissions in 2004 (EIA, 2006). Many DCs in the region are undergoing rapid economic development, so that their total proportion of these totals will soon become dominant, e.g., China is projected to soon outpace the US as the largest emitter of CO2 (see energy use and GHG emission projections of countries included in this study in Appendix Table A1). It is a natural area of cooperation given its long history of international trade, financial, and other institutional treaties. Agreements among trading partners help to reduce tensions relating to the loss of individual country “competitiveness.” They also facilitate brokering, monitoring, and enforcement of permit trades. Moreover, the policy has the potential of enticing some major players into the arena. Five Western States of the US (California, Oregon, Washington, Arizona, and New Mexico) located on or near its Pacific Coast have agreed to a cap-and-trade agreement, and are considering other partners both inside and outside of the US (Washington Post, 2007). Elsewhere in the Pacific, the underlying conditions and projected outcomes of the policy can be designed to be highly favorable to DCs.

This paper contributes to the recent literature on regional cooperative approaches to climate change policy by suggesting parameters for a system of tradable GHG emission permits for the Pacific Rim in a way that makes this policy approach attractive to developing countries. The ‘‘No Harm’’ rules for the allocation of permits imply no costs or no risks to DCs, while at the same time helping to lower GHG emissions and save ICs substantial mitigation costs. It should be noted that while the emphasis of the paper has been on attracting developing countries, the ‘‘No Harm’’ rules result in outcomes that are likely to provide relatively greater gains (both in terms of levels and percentages) to some ICs than for many DCs. The equity of the relative distributional impacts aside, it should be kept in mind that all countries gain from the policies proposed in this paper. The paper, however, has omitted several important issues of designing and implementing this policy instru- ment, such as financial intermediation, monitoring, and enforcement. However, it clearly demonstrates the great potential for cooperation across Pacific Rim countries in addressing the important problem of climate change.