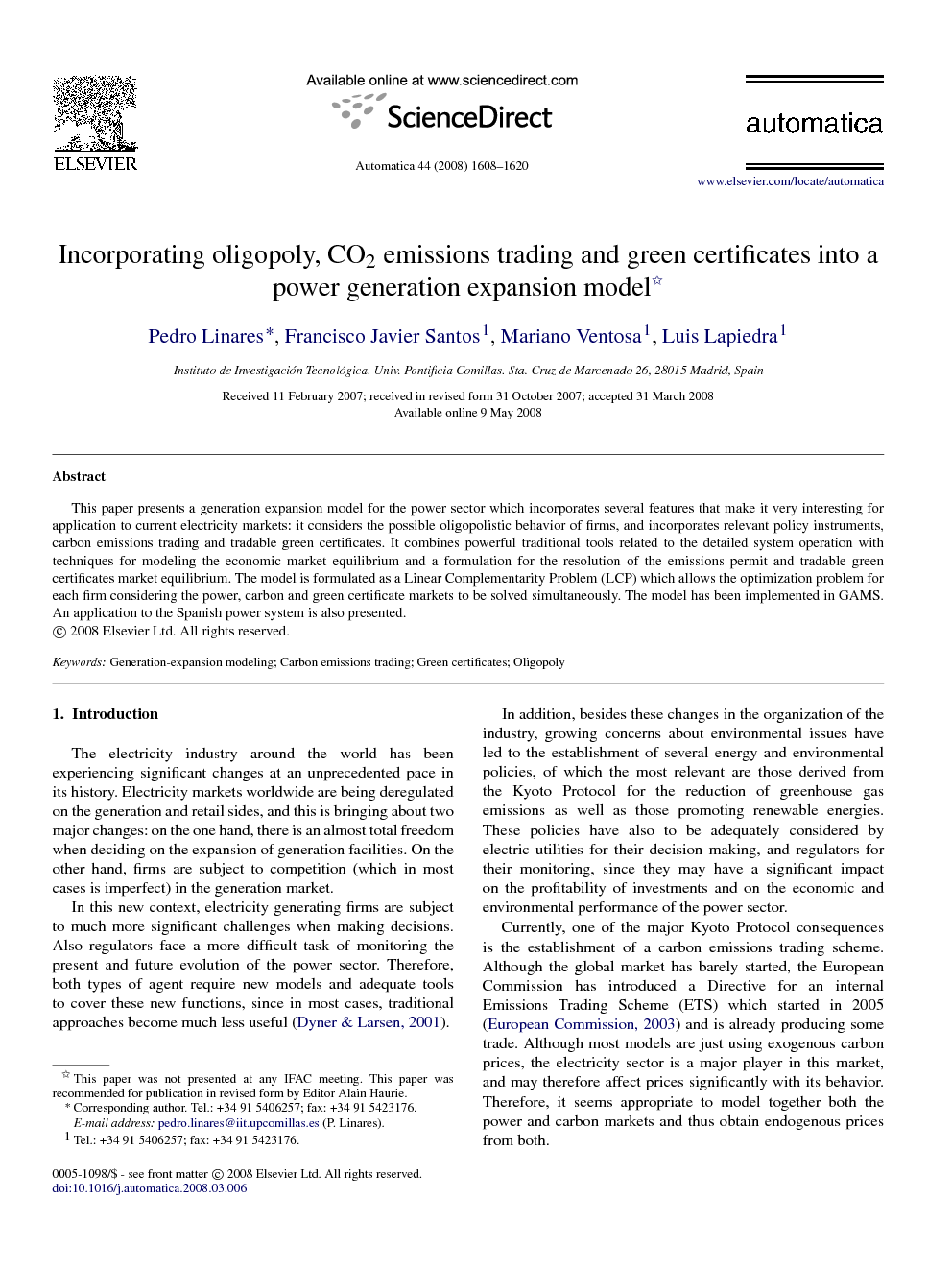 This paper presents a generation expansion model for the power sector which incorporates several features that make it very interesting for application to current electricity markets: it considers the possible oligopolistic behavior of firms, and incorporates relevant policy instruments, carbon emissions trading and tradable green certificates. It combines powerful traditional tools related to the detailed system operation with techniques for modeling the economic market equilibrium and a formulation for the resolution of the emissions permit and tradable green certificates market equilibrium. The model is formulated as a Linear Complementarity Problem (LCP) which allows the optimization problem for each firm considering the power, carbon and green certificate markets to be solved simultaneously. The model has been implemented in GAMS. An application to the Spanish power system is also presented.

The electricity industry around the world has been experiencing significant changes at an unprecedented pace in its history. Electricity markets worldwide are being deregulated on the generation and retail sides, and this is bringing about two major changes: on the one hand, there is an almost total freedom when deciding on the expansion of generation facilities. On the other hand, firms are subject to competition (which in most cases is imperfect) in the generation market. In this new context, electricity generating firms are subject to much more significant challenges when making decisions. Also regulators face a more difficult task of monitoring the present and future evolution of the power sector. Therefore, both types of agent require new models and adequate tools to cover these new functions, since in most cases, traditional approaches become much less useful (Dyner & Larsen, 2001). In addition, besides these changes in the organization of the industry, growing concerns about environmental issues have led to the establishment of several energy and environmental policies, of which the most relevant are those derived from the Kyoto Protocol for the reduction of greenhouse gas emissions as well as those promoting renewable energies. These policies have also to be adequately considered by electric utilities for their decision making, and regulators for their monitoring, since they may have a significant impact on the profitability of investments and on the economic and environmental performance of the power sector. Currently, one of the major Kyoto Protocol consequences is the establishment of a carbon emissions trading scheme. Although the global market has barely started, the European Commission has introduced a Directive for an internal Emissions Trading Scheme (ETS) which started in 2005 (European Commission, 2003) and is already producing some trade. Although most models are just using exogenous carbon prices, the electricity sector is a major player in this market, and may therefore affect prices significantly with its behavior. Therefore, it seems appropriate to model together both the power and carbon markets and thus obtain endogenous prices from both. Regarding renewable energy promotion policies, the two options mostly used are: price systems (premiums) and quota systems (usually associated with tradable green certificates). Although the first are more widespread, due to their seemingly better performance (Menanteau, Finon, & Lamy, 2003), their modeling as an exogenous premium for deciding on generation expansion is somewhat short-sighted. Indeed, premiums are not static, but rather based on implicit quota objectives set by regulators. Therefore, we consider that they should be modeled as quota systems, since that allows for an endogenous generation of the premium. Combinations of both policies already exist in some power markets: the UK and Italy feature both tradable green certificate systems and the carbon trading system imposed by the European ETS. If we consider, as mentioned before, that feed-in tariffs may also be modeled as implicit quotas, then most of European countries are already experiencing the impact of both policies. In this paper, a generation-expansion model for the power sector is presented which incorporates all the above-mentioned aspects, so that it may respond adequately to the needs of firms and regulators in the current electricity markets: it considers the possible oligopolistic behavior of generating firms, and also introduces into the model carbon emissions and tradable green certificates markets. The paper is structured as follows: Section 2 presents the state of the art of generation-expansion models, while Section 3 describes in detail the model presented. Section 4 shows an application of the model to a real case, the Spanish electricity sector. Finally, Section 5 provides the conclusions drawn from the study.

This paper has presented an oligopolistic, generation- expansion model for the electricity sector, capable of simulating adequately new regulatory instruments such as carbon emissions trading and tradable green certificates in an endogenous way. This model presents several characteristics which are likely to provide better estimates than other studies as to the consequences of a carbon emissions trading regime on the electricity sector, namely: • the electricity sector is modeled in great detail, thus providing useful and more realistic information on the impact of new regulations on different utilities and technologies. Although the electricity sector is not the major carbon emitter, with some 20% of the total carbon emissions, it is certainly the major player within the emissions trading scheme (since it represents more than 50% of the total emissions covered by the Directive), and therefore it is important to model it adequately, • contrary to most modeling exercises, ours takes into account the oligopolistic structure of the sector, which produces different results in the incorporation of the allowance price into the electricity price, compared to a perfect competition assumption, • although most models looking specifically at the electricity sector rely on an exogenous allowance price, our model produces it endogenously, which provides more flexibility to the analysis, • the model is not a static one, but simulates the expansion of generation, thereby offering a view of the future effects on prices and technologies, and on the reaction of firms. The results obtained seem quite reasonable, and in line with other studies. In addition, they are very much detailed at theirm level, so that the model can also provide useful insights into the evolution of the sector firm structure. Although still an approximation, considering that it does not address in detail other economic sectors which might also trade in the carbon market, its application to a sample case clearly shows the impact of setting such a kind of market over an electricity system, in that the costs of generating companies can be increased. Also, it shows how the share in the market of the different companies will be modified depending on the allowances market structure and allocation (see Linares et al. ( 2006b )). In addition, results also provide some insights into the possible interactions between tradable green certificates and carbon emission markets. This knowledge is fundamental for firms deciding on their future strategies, and also for regulators when designing energy and environmental policies. Research is still to be continued on several issues to improve the applicability and usefulness of the model. Concerning the expansion planning aspects, uncertainty and risk should be treated adequately, as well as other possible criteria that firms may consider for their strategies. As for the allowances market, further work must be done so as to account for banking of allowances, as well as exploring allowances of types different from those used in this model. Of course, this expanded model should also include other economic sectors, possibly under a general equilibrium framework. Research is under way on these issues at our institution