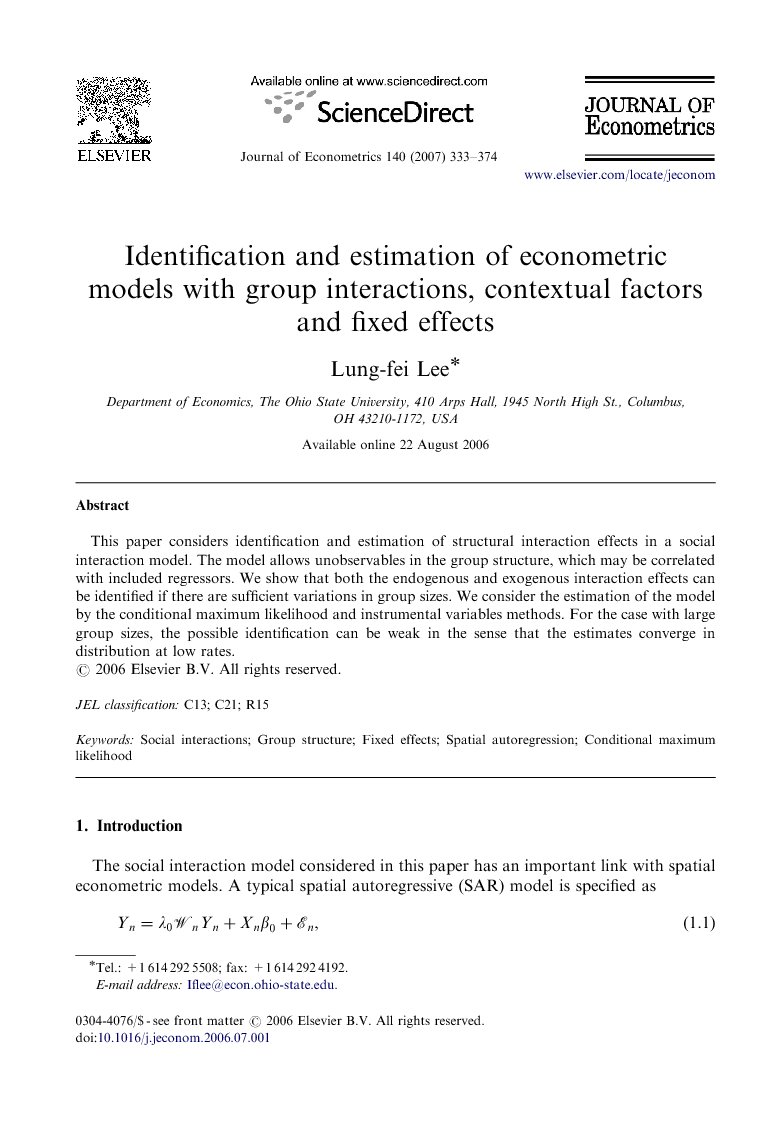 This paper considers identification and estimation of structural interaction effects in a social interaction model. The model allows unobservables in the group structure, which may be correlated with included regressors. We show that both the endogenous and exogenous interaction effects can be identified if there are sufficient variations in group sizes. We consider the estimation of the model by the conditional maximum likelihood and instrumental variables methods. For the case with large group sizes, the possible identification can be weak in the sense that the estimates converge in distribution at low rates.

The social interaction model considered in this paper has an important link with spatial econometric models. A typical spatial autoregressive (SAR) model is specified as equation(1.1) Yn=λ0WnYn+Xnβ0+En,Yn=λ0WnYn+Xnβ0+En, Turn MathJax on where EnEn is a n-dimensional vector consisting of i.i.d. disturbances with zero mean and a variance View the MathML sourceσ02. In this model, n is the total number of spatial units, XnXn is an n×kn×k matrix of regressors, and WnWn is a specified constant spatial weights matrix with a zero diagonal ( Cliff and Ord, 1973). In urban and regional economic studies, a region, a district, or a county can be a spatial unit and its neighboring units in WnWn are defined in terms of a certain physical or economic distance. The equation in (1.1) implies elements of YnYn shall be simultaneously determined given x's and the disturbances εε's as equation(1.2) Yn=(In-λ0Wn)-1Xnβ0+(In-λ0Wn)-1En.Yn=(In-λ0Wn)-1Xnβ0+(In-λ0Wn)-1En. Turn MathJax on This model also has applications in labor economics and social studies—the so-called new social economics ( Durlauf and Young, 2001). For those studies, a spatial unit can be an individual belonging to a social group. The individuals within a group may interact with each other but are usually not interrelated with members in other groups. Suppose there are R groups and there are mrmr units in the rth group. A typical group interactions model has WnWn being a block diagonal matrix, i.e., equation(1.3) View the MathML sourceWn=Diag(W1,…,WR),Wr=1mr-1(lmrlmr′-Imr),r=1,…,R, Turn MathJax on where lmrlmr is the mrmr-dimensional column vector of ones, and ImrImr is the mrmr-dimensional identity matrix. Empirical studies on group interactions are in Case, 1991 and Case, 1992 in consumption pattern and technology adoption, Betrand et al. (2000) on welfare cultures, and Sacrerdote (2001) and Hanushek et al. (2003) on student achievement, among others. The effect of social interactions in a SAR model is directly modeled in terms of observed outcome y's in a group. The parameter λλ in (1.1) captures the contemporaneous and reciprocal effect of peer achievement. As a group effect model with interactions may have policy implications, researchers have pointed out various important specification issues of a group effect model beyond those in a typical spatial model. Manski (1993), Brock and Durlauf (2001) and Moffitt (2001) point out that empirical analyses of peer influences have been inhibited by both conceptual and data problems. Manski (1993) and Brock and Durlauf (2001) separate interaction effects into endogenous and exogenous (contextual) effects. The endogenous effect refers to the contemporaneous and reciprocal influences of peers. The contextual effect includes measures of peers unaffected by current behavior. Manski (1993) has considered a group effect model where social interaction is modeled with expected outcomes and the expected outcomes are solutions from social equilibrium. Manski has pointed out some difficult identification issues on his social effect model as the expected outcome from social equilibrium might be linearly depended on observed exogenous variables of a group in the model—the ‘reflection’ problem. The reflection problem refers to the difficulty to distinguish between behavioral and contextual factors. Another main concern is on possible unobservables in a group, as unobservables in a group may have direct effect on observed outcomes. The unobservables may also cause the total disturbances to be correlated across individuals in a group. Moffitt's criticism is, in particular, relevant as his discussions are presented for the SAR model in (1.1) with a group structure. Moffitt (2001) argues that the basic identification problem of group interaction effects is how to distinguish within group correlations of outcomes that arise from social interactions from correlations that arise for other reasons, in particular, correlated unobservables. 1 In this paper, we consider the SAR model as a group effect model with both endogenous group interaction and contextual factors and allow the existence of correlated unobservables as a fixed effect in a group. There is a close similarity of this model to the Manski endogenous effect model when numbers of members in groups are large. Even so, the SAR model with group interactions does have a distinguishable feature which makes identification of social effect feasible. In Manski's social effect model, the identification of social effect is through the mean regression function and there are no correlations in disturbances generated by social interactions in his setting. For the SAR model, the identification of the spatial effect λλ in (1.1) can be based on two sources. One is the mean regression function E(Yn|Xn)=(In-λ0Wn)-1XnE(Yn|Xn)=(In-λ0Wn)-1Xn in (1.2) and another is due to the correlated distributions of disturbances in (In-λ0Wn)-1En(In-λ0Wn)-1En. We show that the identification of the interaction effects is possible if there are sufficient variations in group sizes in the structural model. We characterize the identification conditions.2 However, when identification is possible, it may be weak when there are large group interactions. We consider the estimation and the consequences of both strong and weak identification features on possible estimators.3