عنوان انگلیسی
What do managers’ survey responses mean and what affects them? The case of market orientation and firm performance
دانلود فوری مقاله + سفارش ترجمه 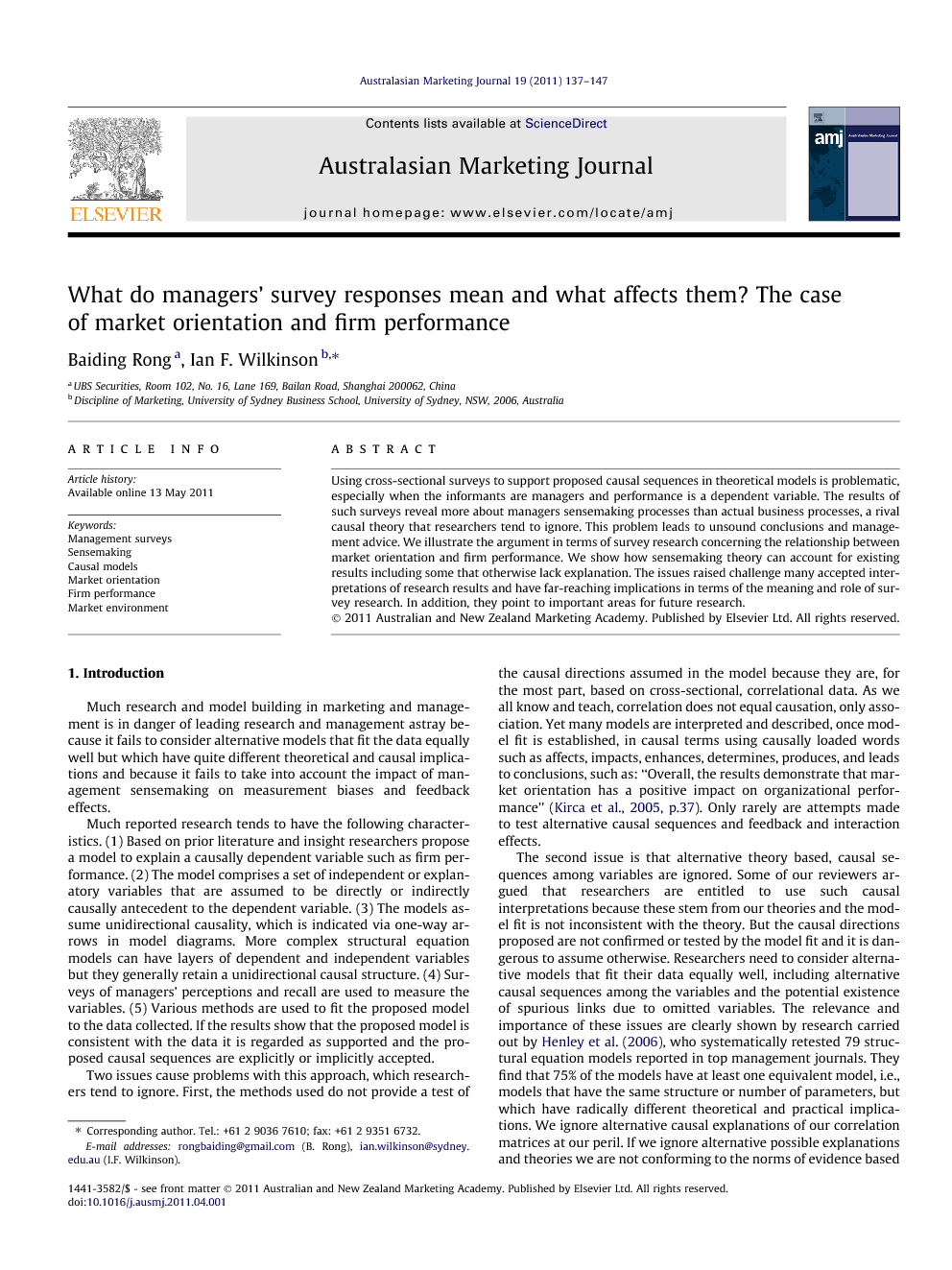 Using cross-sectional surveys to support proposed causal sequences in theoretical models is problematic, especially when the informants are managers and performance is a dependent variable. The results of such surveys reveal more about managers sensemaking processes than actual business processes, a rival causal theory that researchers tend to ignore. This problem leads to unsound conclusions and management advice. We illustrate the argument in terms of survey research concerning the relationship between market orientation and firm performance. We show how sensemaking theory can account for existing results including some that otherwise lack explanation. The issues raised challenge many accepted interpretations of research results and have far-reaching implications in terms of the meaning and role of survey research. In addition, they point to important areas for future research.

Cross-sectional survey research has many strengths and obviously plays an important part in research in marketing, management and other disciplines (Rindfleisch et al., 2008). That this type of research is inappropriate is not the argument here, Instead, such surveys face a number of problems, especially when they are based on managers’ perceptions and recall and when performance is a dependent variable. Furthermore, these problems have been neglected in marketing and management research but they need attention, otherwise our interpretations of survey results can misdirect research efforts and lead to misleading advice to managers and policy-makers. As Das (2003) points out, “the inaccuracies of manager perceptions should be taken as a given,” and it is more important “to see where the inaccuracies arise from and what their consequences are in practice” (p.23). Managers engage in a constant process of trying to understand and make sense of what they know and believe about themselves and their firm and to reconcile this with their ongoing experience of firm behaviour and performance in a particular environment – what Weick (2000) describes as sensemaking. The process of sensemaking does not result in an accurate and unbiased view of the firm and its environment but one that is governed by various psychological principles related to the way managers seek and process information about their firms, the causal attributions they tend to make, and their desire for cognitive consistency (Ailawadi et al., 2004). Sensemaking theory suggests an alternative causal ordering of variables to that usually proposed. In the case of MO-Performance research it is a theory that is consistent with existing results and is even capable of explaining some results that are otherwise difficult to explain. The relevance and significance of sensemaking biases go way beyond the study of MO and performance, important though this is, because such biases force us to reassess how academics use and interpret the results of any survey of management perceptions and recall. The impact of such sensemaking biases is an important issue because explaining variations in firm performance has been the subject of many proposed models and research studies in marketing and management and most of these are tested using cross-sectional surveys of managers. In these studies firm performance is linked to various types of factors including firm orientations, resources and other characteristics and to environmental characteristics. The resource-based theory of the firm (Barney, 1991) and resource-advantage theory (Hunt and Morgan, 1996) are examples of general theories of this form. Examples of research on specific factors affecting firm performance include, technology orientation (Gatignon and Xuereb, 1997), production orientation (Pelham, 2000), learning orientation (Barker and Sinkula, 1999), entrepreneurial orientation (Matsnuno et al., 2002) and strategy type (Matsuno and Mentzer, 2000). In addition to research on firm performance, management perceptions and recall are used in a variety of other types of research. In each case management sensemaking processes offer another potential theoretical explanation for the research results and the causal links among variables in the model. One example is the study of organizational characteristics and how they are interrelated, including studies of organizational culture, innovation, information flows, growth and decision-making. A manager’s perceptions and recall of one type of organizational variable is likely to influence and be influenced by their perceptions of other types of variables thus introducing potential bias and other causal directions linking variables. Another example is the study of inter-organizational and buyer–seller relations that examine the effects of relation dimensions such as power, conflict, trust and commitment on each other and on other characteristics of relations such as longevity, cooperativeness, growth, performance and innovation. For this research managers from only one side of the relation tend to be interviewed and asked about both sides of the relationship. This results in additional sensemaking problems for the respondent as they use various types of information to determine the way a counterpart sees the relation. Other types of survey research potentially affected by management sensemaking include studies of firm strategic behaviour, supply chain management, customer relationship management, organizational buying behaviour and so on. But, no matter what the specific focus of the research, the potential impact of management sensemaking on the results cannot be avoided and should not be ignored. Given the problems and limits of cross-sectional survey-based research using management perceptions and recall, why do researchers persist with this type of research and why is it published? We are all aware that cross sectional surveys cannot determine causality and that research based on management perceptions and recall is subject to potential bias – this is not new. March and Sutton (1997) suggest an answer: “properties of the research context, rather than individual ignorance or journal incompetence, may be primary contributors to this curiosity” (p.702). There are barriers to carrying out the kind of longitudinal and detailed studies required to overcome the problems identified, including short term research funding, the need for publications for career advancement and what professional journals demand. The managerially focused environment in business schools also encourages academics to develop and promote the types of theories that managers want (Gray and Wilkinson, 2007), i.e., ways of predicting and controlling firm performance, even if the research support is equivocal. This leads to research that is believed and accepted more because it fits with researchers’ management orientation, not because of its research standards and attention to causal inferences. We could even see this as a reflection of researcher sensemaking, where the research culture serves to limit the attention given to rival hypotheses such as those resulting from management sensemaking.