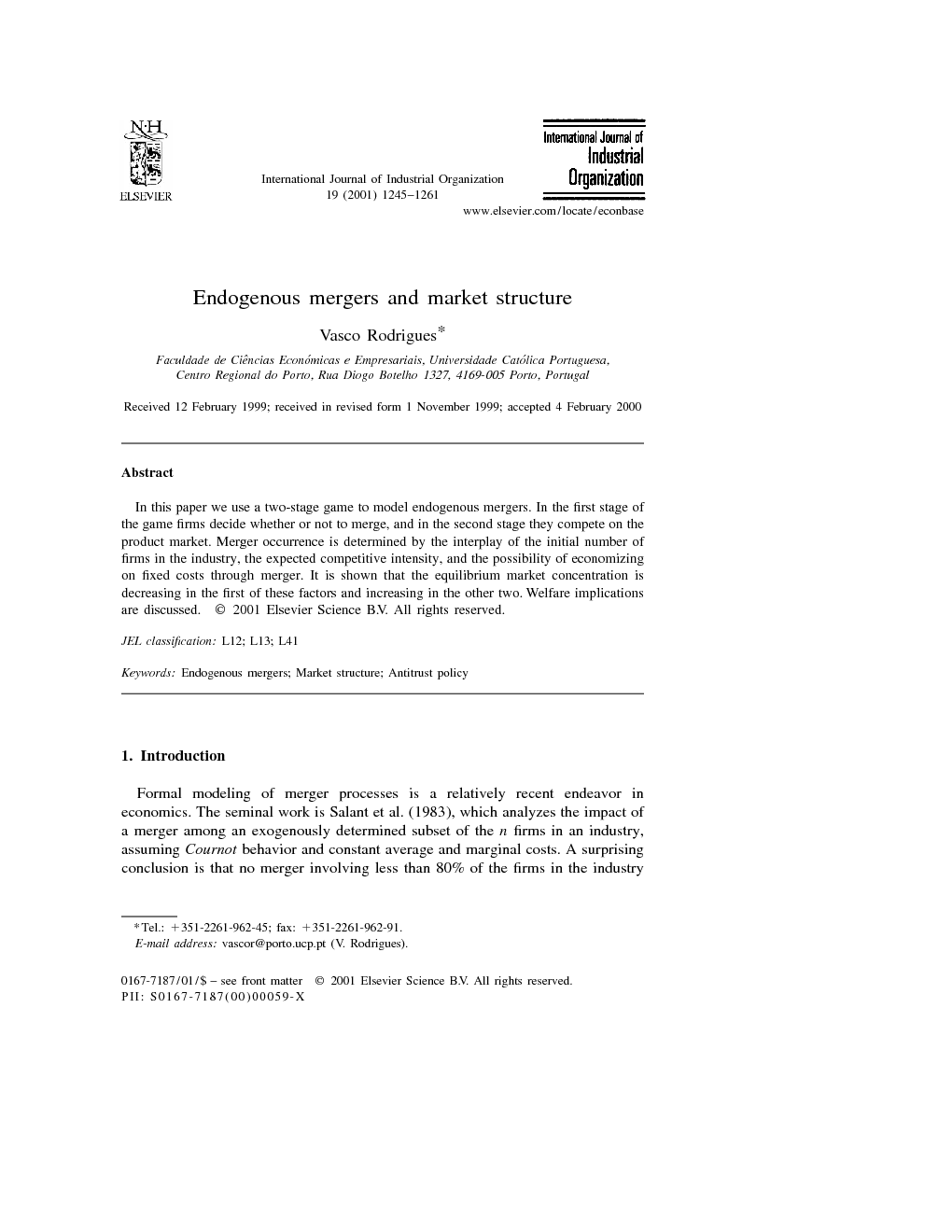 In this paper we use a two-stage game to model endogenous mergers. In the first stage of the game firms decide whether or not to merge, and in the second stage they compete on the product market. Merger occurrence is determined by the interplay of the initial number of firms in the industry, the expected competitive intensity, and the possibility of economizing on fixed costs through merger. It is shown that the equilibrium market concentration is decreasing in the first of these factors and increasing in the other two. Welfare implications are discussed.

Formal modeling of merger processes is a relatively recent endeavor in economics. The seminal work is Salant et al. (1983), which analyzes the impact of a merger among an exogenously determined subset of the n firms in an industry, assuming Cournot behavior and constant average and marginal costs. A surprising conclusion is that no merger involving less than 80% of the firms in the industry would be privately profitable. The supervening literature (e.g. Perry and Porter, 1985, Deneckere and Davidson, 1985, Kwoka, 1989 and Farrel and Shapiro, 1990) has challenged the robustness of this conclusion and has examined the welfare effects of exogenous mergers. An even more recent strand of literature, with which this paper concurs, investigates the pattern of mergers that can be expected to occur, by endogenizing the merger decision. Kamien and Zang (1990) analyze the conditions that limit the possibility of monopolization of an industry by intra-industry acquisition of firms. Their main conclusion is that monopolization can only occur in industries composed ex ante of a small number of firms, a conclusion that our model reiterates. Gaudet and Salant (1992) extend the previous model and, among other conclusions, show that not every privately profitable merger will occur when mergers are endogenously determined. Gowrisankaran (1999) presents a particularly complex model in which firms make merger, exit, investment and entry decisions before competing in the product market. Using dynamic programming methods the author is able to characterize one, not necessarily unique, Markov-Perfect Nash Equilibrium for this game. Among his conclusions, the fact that an increase in entry costs results in increased concentration through merger seems particularly relevant. Our model builds upon the existing literature, particularly Kwoka (1989), to investigate how an industry’s endogenous level of concentration relates to mergers’ capability to generate market power and efficiency gains, their conflicting effects that drive much of the economists’ interest in the subject. In the two-stage game presented, the mergers that occur endogenously are explained by the interplay of the number of firms in the initial market structure, the expected competitive intensity and the economies permitted by the merger, with the equilibrium market concentration decreasing in the first of these factors and increasing in the other two. Having characterized the equilibrium market structure, we then show that in industries that are not, ex ante, very concentrated, endogenously generated mergers will only be socially detrimental if the expected competitive intensity is extremely strong or the opportunities for fixed cost savings are very limited. The paper is organized as follows: our model of endogenous mergers is presented first; we then analyze the implications of mergers on the product market; the next section investigates the equilibrium market structure and related welfare implications; we then conclude.

In the model presented in this paper, three factors interact to determine whether or not firms will merge: the initial number of firms in the industry, the expected competitive intensity and the possibility of economizing on fixed costs through merger. The model shows that the equilibrium market concentration, and firms’ propensity to merge, is decreasing in the first of these factors and increasing in the other two, a conclusion capable of empirical refutation. This direct relation between competitive intensity and concentration implies that, when firms have the ability to alter the market structure, (expected) competitive intensity is inversely related to the consumer surplus. This result, that seems to run contrary to the direct relation between competition and consumer surplus often admitted in industrial organization, echoes other results in the two-stage game literature. We have shown, however, that, when fixed cost economies are taken into consideration, endogenously generated mergers will be socially beneficial, if the competitive intensity is not extremely strong or the industry is not, ex ante, very concentrated. This does provide some guidance for where merger policy should focus. It remains to be seen whether our results are robust to changes in the model’s assumptions: different, or more general, functional forms for cost and demand, firm heterogeneity, and different endogenous merger formation processes, all seem to deserve future research. The fact that, while providing new insights, our model reiterates some of the results in the literature is nevertheless encouraging.