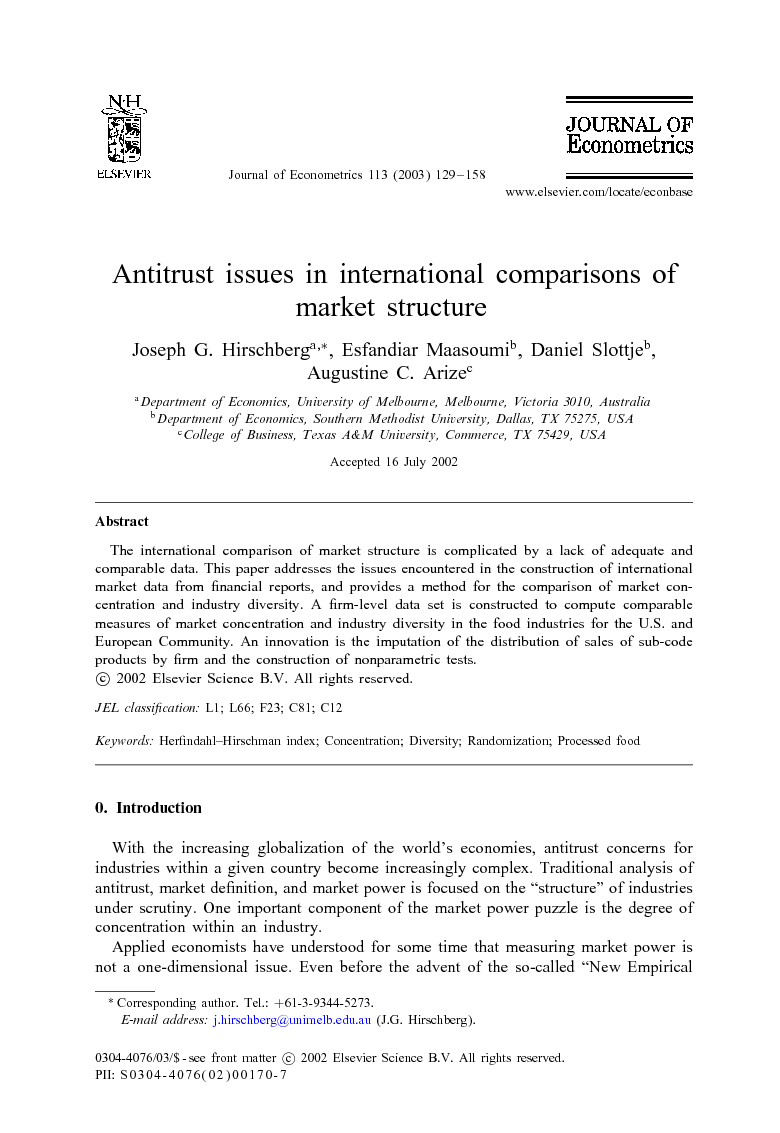 The international comparison of market structure is complicated by a lack of adequate and comparable data. This paper addresses the issues encountered in the construction of international market data from financial reports, and provides a method for the comparison of market concentration and industry diversity. A firm-level data set is constructed to compute comparable measures of market concentration and industry diversity in the food industries for the U.S. and European Community. An innovation is the imputation of the distribution of sales of sub-code products by firm and the construction of nonparametric tests.

This research demonstrates the quality of the inferences available from a data set that is solely constructed from financial report data supplemented with a set of market participation ordered by importance. The concentration differences can be made a function of other variables that capture the taste and technological aspects of the SICs. The inclusion of all the countries in the EC in a single market may not be very reasonable for a number of industries—such as 2051 (bread, cakes and related products), 2082 (malt beverages) and 2084 (wines, brandy, and brandy spirits)—where individual EC countries have long histories of special tastes for these products. However, the EC is moving to develop true integration among these markets. Furthermore, some of the EC/U.S. comparisons may not be very meaningful due to the limit of the size of the firm included in the sample. In a number of cases the $150 million limit mean that a large proportion of firms (especially for the EC) were excluded. This will result in an over-statement of the concentration. This may well be the reason for the high relative concentration of SIC=2082 (malt beverages) and SIC=2064 (candy and other confection products) of the EC over the equivalent U.S. data. The malt beverage concentration may reflect the presence of only the large UK brewers which dominate the market as constructed because the smaller firms in the German market are not included. Careful attention should be paid to many of the comparisons made here. However, under the objective to study the potential for U.S. firms competing abroad and for EC firms competing in the U.S., the limitation to only large firms may prove to be very useful. If an argument can be made that scale economy is needed to consider competition in foreign markets, then limiting the analysis to large firms may be reasonable. However, the argument that concentration translates into potential ability to compete abroad may not be a viable argument, especially in light of the highly concentrated U.S. car market and the relatively low propensity for U.S. food producers to export (see Handy and Henderson, 1992). Future directions for this research include the verification of these results using simulated data for smaller firms that would be sampled under the $150 million sales level. Another future topic would be to differentiate the diversity measures to account for upward and downward vertical integration as well as other horizontal integration by region. Furthermore, the simulations used here could be extended to include simulations of data used in a second level econometric analysis. This could involve the use of the simulated data along with other information in regression analysis. A first step in this direction was the interregional correlation of the concentration measures.