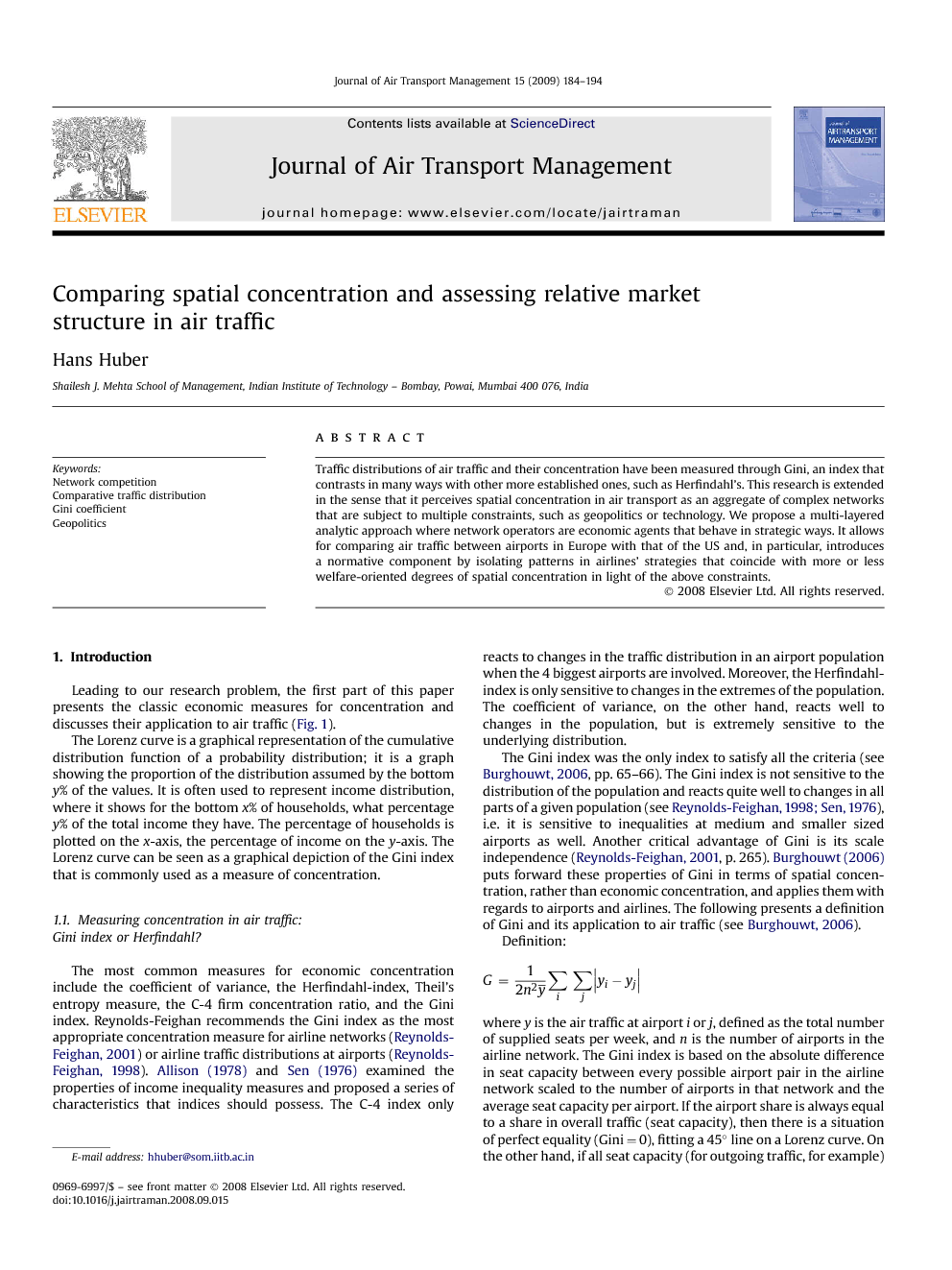 Traffic distributions of air traffic and their concentration have been measured through Gini, an index that contrasts in many ways with other more established ones, such as Herfindahl's. This research is extended in the sense that it perceives spatial concentration in air transport as an aggregate of complex networks that are subject to multiple constraints, such as geopolitics or technology. We propose a multi-layered analytic approach where network operators are economic agents that behave in strategic ways. It allows for comparing air traffic between airports in Europe with that of the US and, in particular, introduces a normative component by isolating patterns in airlines' strategies that coincide with more or less welfare-oriented degrees of spatial concentration in light of the above constraints.

Leading to our research problem, the first part of this paper presents the classic economic measures for concentration and discusses their application to air traffic (Fig. 1). Full-size image (18 K) Fig. 1. Lorenz curve. Figure options The Lorenz curve is a graphical representation of the cumulative distribution function of a probability distribution; it is a graph showing the proportion of the distribution assumed by the bottom y% of the values. It is often used to represent income distribution, where it shows for the bottom x% of households, what percentage y% of the total income they have. The percentage of households is plotted on the x-axis, the percentage of income on the y-axis. The Lorenz curve can be seen as a graphical depiction of the Gini index that is commonly used as a measure of concentration.

Our findings draw a complex, though nuanced and coherent picture of the differences in traffic distributions between Europe and the US. In Europe, relative to the US, much fewer airports serve trans-European routes, but relatively many serve long-distance and intercontinental. It will remain to be seen to which extent the success of trans-European low costs (i.e. the Ryanairs, etc.) can be extrapolated into the future. One obstacle, of course, may come from the European Union's ambitious program to encourage trans-border traffic with high-speed trains. The hub-and-spoke structure is a key concept that helps us explain the different distributions of traffic and its inherent economies, but also needs to take into account the role that geopolitical aspects may play when instrumentalizing them: with the full integration of European air traffic being yet unaccomplished, airports in the US have shown to organize around hub airports that are dependent on domestic routes (both intra-state and inter-state), whereas even for intra-state routes they are able to benefit from distance economies that help lower unit costs of operating flights. Due to the shorter distances within European nation states, such economies risk to remain unexploited in many cases. Geopolitical considerations that would not matter inside an US-domestic market in many cases prevent European cross-border traffic. As was shown with its very high Gini score, spatial concentration among the European airports is strongest for long-distance, i.e. intercontinental, routes. Geopolitics is a key aspect that helps explain the relative underdevelopment of trans-European and the disproportionate concentration of intercontinental routes at very few airports compared to the US. Looking at the composition of airlines as economic agents and the strategic behaviour that is manifest in both geographies, other important asymmetries were found: very small airline networks make up the majority of agents in Europe, whereas they do practically not exist in the US, with competition there being less atomised compared to Europe. In the US, several large airline networks exist that specialize on domestic traffic with little or no long-distance links to outside the US. In Europe, the only airline that seems to come close to sharing such network characteristics today is low-cost entrant Ryanair. For similar network size, we see significantly higher rates of traffic at airlines' hub airports in the US compared to Europe. Also, large and very large airline networks in the US provide significantly more connections per airport served, as well as exhibiting faster decaying, i.e. more unequal, traffic distributions among airports. This higher performance of large to very large US airlines was found independently of their intercontinental scope. A further decomposition at geopolitically distinct levels of traffic distribution allowed pinpointing the impact of various airlines both for Europe and the US. For domestic markets inside EU member states, the biggest legacy carriers were still heavily invested in such routes, but operated on the most densely travelled ones only, with less densely travelled ones being served by highly fragmented medium and small airline networks. This situation stands in contrast with the US, where intra-state routes are covered by multiple specialized domestic operators of mostly large high density networks. Larger geographic distances inside states allow large networks to exploit routes on intra-state (in the same manner as they would on intra-state) and organize these economically viable routes around hubs, where market coverage shows little overlap of airports with those covered by other strategic groups. As for intra-European traffic, we found little evidence that big networks contributed in an indispensable way to improving trans-European connectivity, considering their focus on exploiting the highest density routes only. Multiple medium-sized airlines, many of them legacy carriers, deploy capacity on significantly longer high density routes. Ryanair stands out as the most remarkable example of having grown into a large medium to higher density trans-European network. As for the US, in contrary, large and medium-sized networks have emerged that provide domestic (i.e. inter-state) service between many more airports than in Europe. They are effective alternatives to the very big legacy carriers, while operating higher density routes with little or no intercontinental scope. Due to the greater geographic scales in North America, these networks can take advantage of distance economies (without operating on above average distances compared to the overall US market). Other very large networks which are operated by legacy carriers tend either to concentrate traffic on ultra-high density, shorter distances or high densities on significantly longer routes. As for long-distance and intercontinental, the European context shows a somewhat idiosyncratic market structure with a high number of small airlines operating scheduled flights on point-to-point routes. Their business models may, for example, be economically viable by exploiting distance economies with medium-sized aircraft to very few, high value, destinations. As for large networks that show substantial intercontinental scope, there is little evidence that would suggest that spatial hyper-concentration, such as exemplified by AF[3] (see Table 3), is truly required or necessary, in particular when taking into account negative externalities that are mostly due to airport congestion at these very few European mega-hubs. As shown, higher spatial capacity of airlines often was accompanied by a more pronounced segmentation of markets and specialization between strategic groups of operators in the US. This evolution was related, although needed to be distinguished from spatial concentration at the airport level. Policy makers may find that less fragmented market structures would enable airlines to exploit distance economies and organize into medium-to-large scale hub networks if geopolitical limits can be overcome. Such organization of air traffic can be expected to provide for sustainable, efficient and balanced competition. As for the legacy carriers, the US example again shows that alternatives exist to such spatial hyper-concentration. It is up to the policy maker to decide whether Europe's biggest incumbents may continue to be allowed to pursue further on the path to which they had decided upon early into liberalization. Otherwise, policy may encourage these same agents to change course and follow the US example of medium-to-large sized networks that in the end would present an alternative for competitive market structure in the long run.