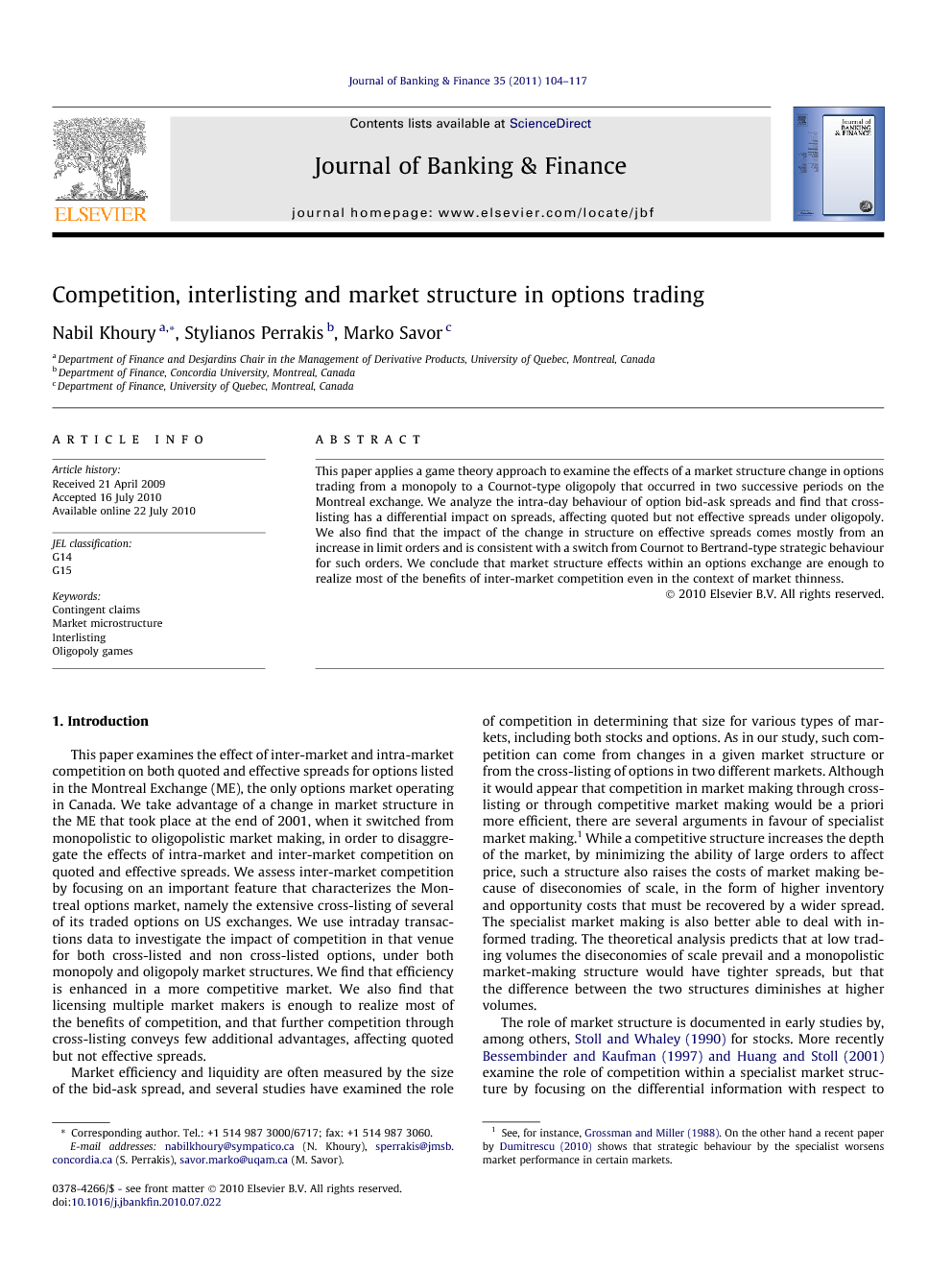 This paper applies a game theory approach to examine the effects of a market structure change in options trading from a monopoly to a Cournot-type oligopoly that occurred in two successive periods on the Montreal exchange. We analyze the intra-day behaviour of option bid-ask spreads and find that cross-listing has a differential impact on spreads, affecting quoted but not effective spreads under oligopoly. We also find that the impact of the change in structure on effective spreads comes mostly from an increase in limit orders and is consistent with a switch from Cournot to Bertrand-type strategic behaviour for such orders. We conclude that market structure effects within an options exchange are enough to realize most of the benefits of inter-market competition even in the context of market thinness.

In this paper we examine the effects of competition on the quality of trading in the options market of the Montreal Exchange, the latter measured by both quoted and effective spreads. We examine separately the effects of external and internal competition on trading quality. External competition comes from the cross-listing of options between Canada and the US. As for internal competition, we take advantage of a change in the structure of market making in the ME, from a monopoly (specialist) market to an oligopoly, and examine data on a sample of traded options in two successive periods with different structures. We allow for differential microstructure effects depending on the volume of the transaction and we distinguish three different time-of-day periods. We also recognize the importance of thin trading on quoted spreads, a feature of Canadian financial markets that has been recognized in many studies but has not been included till now as a determinant of market microstructure. The main result of our analysis is the importance of internal competition in improving the quality of trading. The switch from a specialist to a competitive market making structure, the latter ending up as an oligopoly with a few large competitors, brought major reductions in quoted spreads for all options. The reductions in effective spreads from the change in structure were also significant but less pronounced, possibly because market thinness reduces significantly the size of our sample to the observations for which a trade has occurred. There is also no evidence of an economies of scale advantage to the specialist structure. By contrast external competition in the form of cross-listing of the traded options in the US played some role in reducing quoted spreads, but had no effect on effective spreads under the oligopoly market making structure. We also find that market thinness is a significant determinant of the quoted spreads, which may be related to the asymmetric information cost component of market making. We find that the quoted spread results under the oligopoly market structure are consistent with the predictions of a homogenous product Cournot oligopoly model with the size of the quotes as a strategic variable. Under such a structure there is still scope for additional competition from cross-listing, which is shown to be significant in reducing the size of quoted spreads. Effective spreads, on the other hand, are totally unaffected by external competition. We find this result also consistent with the oligopoly model, since for limit orders that fall within the bid-ask spread the strategic variable in the game is the price. Since the product is homogenous, the equilibrium of that game is that price becomes equal to marginal cost, so that further competition cannot bring any more price reductions. We conclude that market structure effects within an options exchange are at least as important for market efficiency as inter-market competition. Since the significance of our results was often more pronounced in intraday trading, we also conclude that by relying on end-of-day quotes, empirical studies can overlook many relevant aspects of market microstructure.