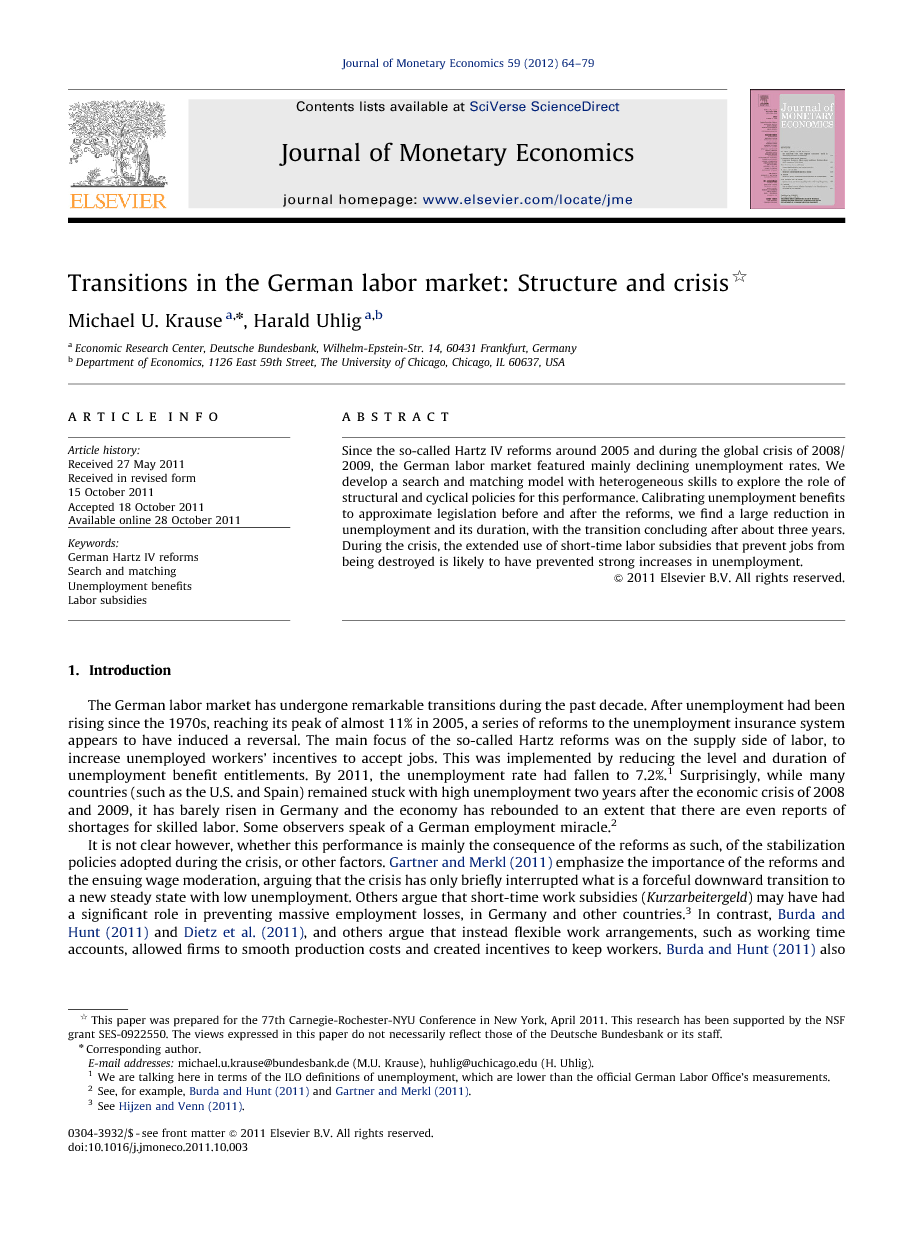 Since the so-called Hartz IV reforms around 2005 and during the global crisis of 2008/2009, the German labor market featured mainly declining unemployment rates. We develop a search and matching model with heterogeneous skills to explore the role of structural and cyclical policies for this performance. Calibrating unemployment benefits to approximate legislation before and after the reforms, we find a large reduction in unemployment and its duration, with the transition concluding after about three years. During the crisis, the extended use of short-time labor subsidies that prevent jobs from being destroyed is likely to have prevented strong increases in unemployment.

Our main findings can be summarized as follows. In a model that features skill heterogeneity and a stylized description of the German unemployment insurance system before and after the Hartz reforms, the removal of essentially indefinitely paid earnings-dependent unemployment benefits reduces the unemployment rate by 2.8% points. In the new system, the unemployed workers stop receiving earnings-dependent benefits after a little more than a year, so most long-term unemployment is found among welfare recipients. Overall employment and output are larger, and the average duration of unemployment drops.27 To examine the impact of the 2008 financial crisis, we calculated the impact of a shock to the discount factor. By itself, it leads to large adjustments of the unemployment rate, and thus seems a candidate for explaining a significant fraction of movements in employment. Since the adjustments after the reform were likely to have concluded before the crisis hit, we believe that they are not the main factor that kept the unemployment rate as stable as was observed in Germany. Instead, subsidies to jobs deliver a possibility to reduce the impact of aggregate shocks on labor, at moderate costs. A number of questions surely remain open. We have not documented the impact on the welfare of workers due to various policies, nor have we attempted to solve for optimal labor market policies (and they may be a bit too simplistic in this model, in any case). More detail on modelling the implementation of short-term labor subsidies would be intriguing, adding elements from, say, Nakajima's (2011) analysis. Our workers only differ in productivity: however, they may have been affected differently in the 2008 financial crisis due to non-substitutability of their labor. An extension to more widely dispersed productivities, or even with large firms, would certainly deliver additional and important insights.28 Deeper thought should also be given to the response of the economy to shocks. The transitions after the reforms and after shocks are likely to be influenced by real wage rigidities, by lumpy hiring, training, and firing costs, and sticky prices, thus giving a role to labor hoarding. We leave all this for future research.