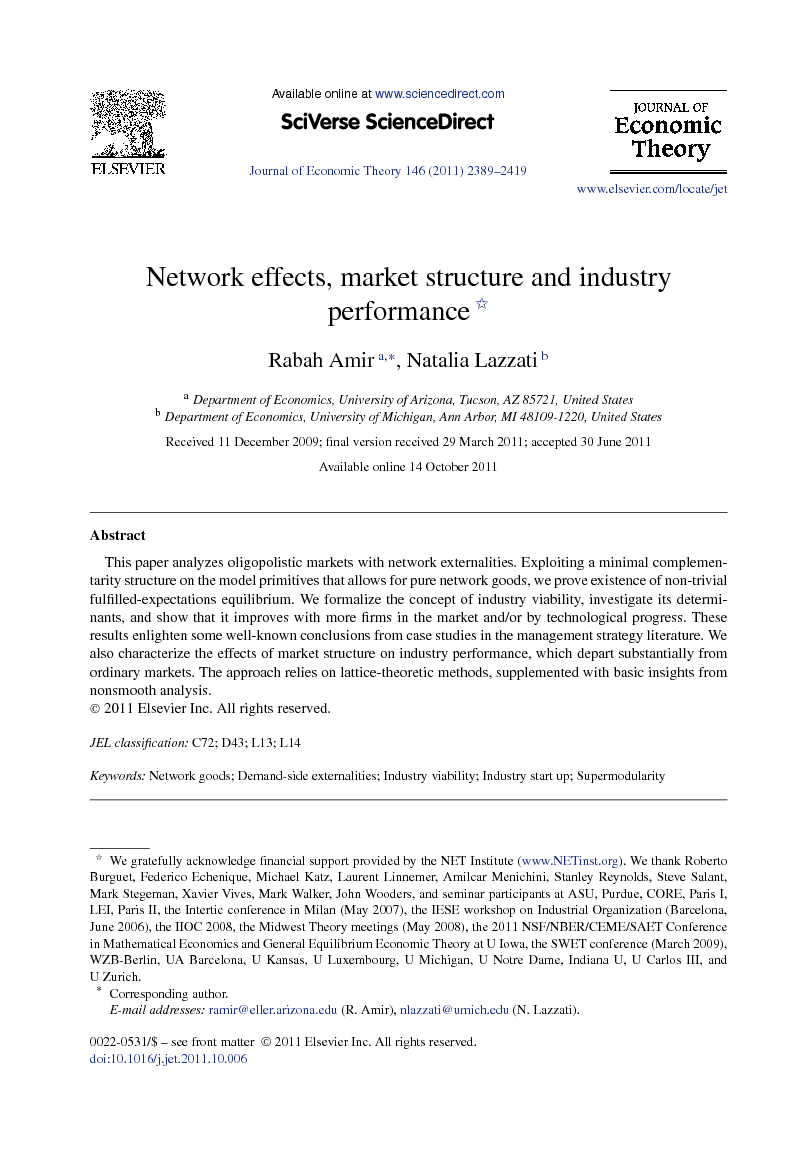 This paper analyzes oligopolistic markets with network externalities. Exploiting a minimal complementarity structure on the model primitives that allows for pure network goods, we prove existence of non-trivial fulfilled-expectations equilibrium. We formalize the concept of industry viability, investigate its determinants, and show that it improves with more firms in the market and/or by technological progress. These results enlighten some well-known conclusions from case studies in the management strategy literature. We also characterize the effects of market structure on industry performance, which depart substantially from ordinary markets. The approach relies on lattice-theoretic methods, supplemented with basic insights from nonsmooth analysis.

This paper has provided a thorough theoretical analysis of a static model of oligopolistic competition with non-additive network effects. A minimal complementarity structure on the model leads to industry output increasing in the rivalsʼ output that a firm faces and in the expected network size, thus yielding in one broad stroke existence of symmetric equilibrium as well as some key characterization results with a comparative statics flavor. The so-called start up problem is extensively investigated, in terms of basic properties of the market primitives, and the strength of network effects. In particular, industry viability, a key concept in network markets for which we provide novel theoretical foundations, is shown to be enhanced by higher numbers of competitors in the market as well as by technological progress. The central feature here is a simple learning/adjustment dynamics that also serves as a theoretical foundation for the solution concept of fulfilled expectations Cournot equilibrium. We elaborate in some detail on the natural tendency for multiple equilibria, path dependence, and the importance of initial market expectations, features that emerge due to the presence of demand-side increasing returns driven by non-additive network effects. As to the effects of market structure, sufficient conditions are derived for each dimension of market performance to increase or decrease with more competition. The tendency for counterintuitive effects, which is extensively characterized, is much stronger than in ordinary markets. Most notably, price and per-firm profits can both increase with the number of firms, with the latter effect having no counterpart in ordinary markets even under scale economies (Amir and Lambson [4]). Along with the need, often critical, for firms to join hands to successfully launch new network products, these results underscore the co-opetitive nature of the FECE concept: Firms are partners in setting expectations and building consumer base, but (business-stealing) competitors in serving that base. Several instructive examples with closed-form solutions are constructed, one of which reflects exactly the prototypical three-equilibrium configuration that is broadly thought to capture the essence of the viability issue through expectation dynamics in telecommunications industries. In terms of policy implications, by identifying precise and tight conditions for the various possible effects to hold, our results provide solid theoretical foundations for some well-known policy prescriptions that need revisiting for network markets (Shapiro [30]). The main departure from ordinary markets is the emergence of a start up problem, with potentially serious consequences for both firms and society. A successful launch of a new product with a small stand-alone value depends on various factors, including the usual ones, such as intrinsic quality, production costs, reputational aspects, and government participation. In addition, as the case studies reported in the business strategy literature confirm, interconnection amongst competitors or agreement on compatibility is quite often a critical determinant of success (Shapiro and Varian [31] and Rohlfs [29]). The results on viability provide a solid theoretical grounding to lend insight to the lessons on the start up problem gleaned from these case studies, in ways that apply to both successes and failures. One implication for product development is that, as a way out of the start up trap, firms ought to bundle multiple functions in network products, in order to ensure a sufficient stand-alone value. Our results on market performance also largely confirm Rohlfs [29] clear-cut conclusion that interconnection is most often a win-win proposition for both firms and society.25 When the effects of more competition can lead to multiple reversals of conventional intuition, the usual trade-offs between consumer surplus and producer surplus are no longer the norm, and many pillars of conventional wisdom about suitable public policy for such industries need re-examining. The presence of network effects might have unusual implications on firmsʼ attitudes towards intellectual property rights and entry deterrence. Firms in possession of patents will have a much higher than usual incentive to engage in licensing to their rivals on rather generous terms (Shepard [32], Shapiro [30]). Pooling of patents held by different firms is also to be expected. In terms of antitrust implications, various forms of pro-competitive cooperation amongst direct rivals should be allowed or even encouraged. This is particularly true concerning the often difficult and costly process of establishing a common standard needed for a new network industry to succeed. In terms of public policy, government participation in network industry start ups can be crucial due to the major role it can play in terms of influencing market expectations (the S0S0 variable) upwards. In addition, the interconnection process can raise such thorny and complex issues for the private actors that a positive coordinating role for government agencies often arises. Even initial subsidies might play a very constructive role. In one of his most instructive case studies, Rohlfs [29] reports that the unprecedented success of the ultimate network industry – the Internet – is largely due to the direct role played by the U.S. government via its DoD and NSF temporary subsidy programs, in terms of ensuring global interconnection.26 Rohlfsʼ detailed account of this glorious episode of government intervention suggests that, without it, interconnection for the Internet – something usually taken for granted – could easily have failed or been substantially delayed. The present analysis paves the way for further promising research in a number of interesting directions, including (i) the role of marketing in the start up problem, (ii) the scope for divisionalization in network industries in terms of both start up and profit incentives of firms, and (iii) the comparison with the case where firms possess commitment power in setting output levels.