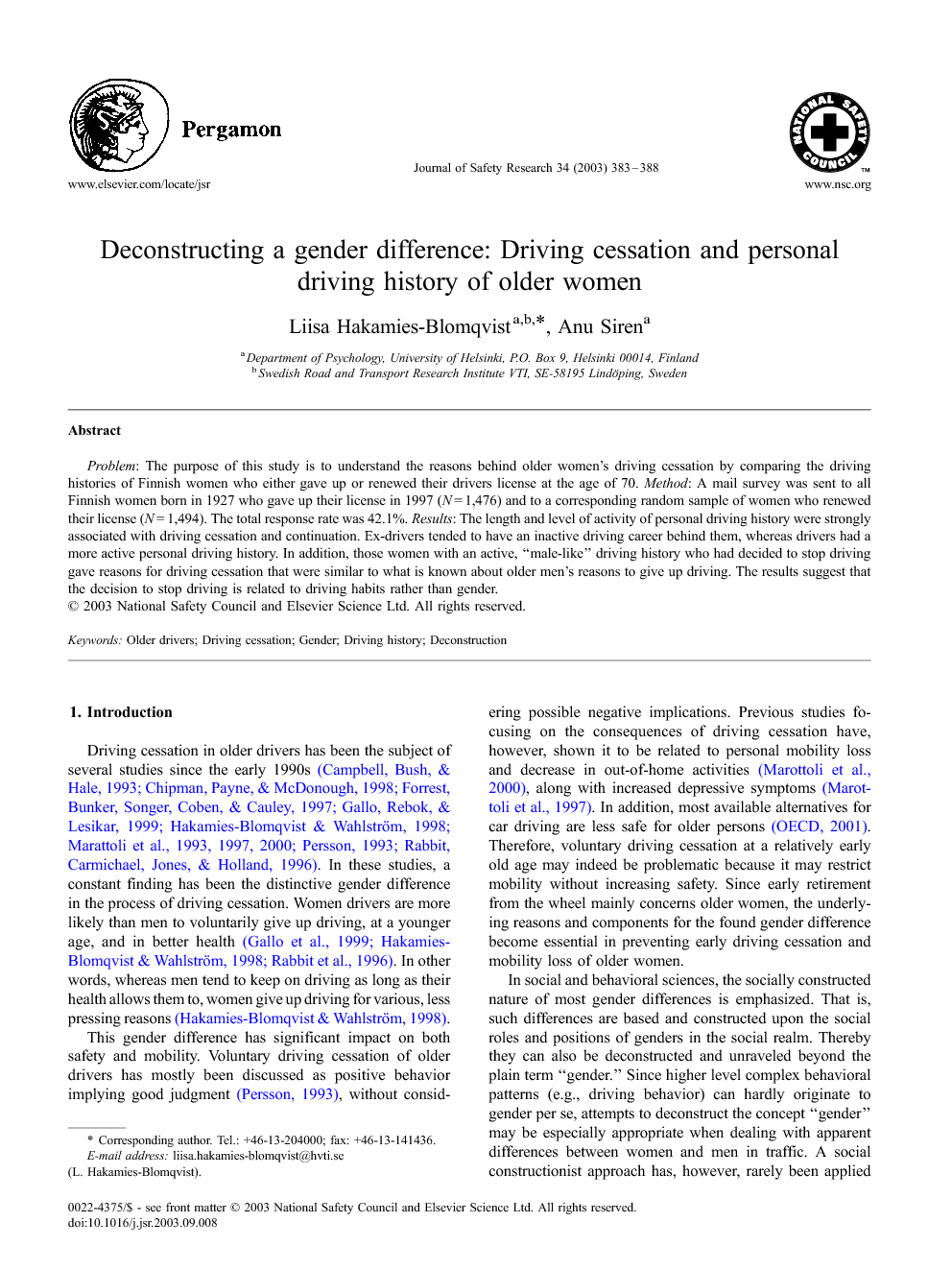 Problem: The purpose of this study is to understand the reasons behind older women's driving cessation by comparing the driving histories of Finnish women who either gave up or renewed their drivers license at the age of 70. Method: A mail survey was sent to all Finnish women born in 1927 who gave up their license in 1997 (N=1,476) and to a corresponding random sample of women who renewed their license (N=1,494). The total response rate was 42.1%. Results: The length and level of activity of personal driving history were strongly associated with driving cessation and continuation. Ex-drivers tended to have an inactive driving career behind them, whereas drivers had a more active personal driving history. In addition, those women with an active, “male-like” driving history who had decided to stop driving gave reasons for driving cessation that were similar to what is known about older men's reasons to give up driving. The results suggest that the decision to stop driving is related to driving habits rather than gender.

Driving cessation in older drivers has been the subject of several studies since the early 1990s Campbell et al., 1993, Chipman et al., 1998, Forrest et al., 1997, Gallo et al., 1999, Hakamies-Blomqvist & Wahlström, 1998, Marottoli et al., 1993, Marottoli et al., 1997, Marottoli et al., 2000, Persson, 1993 and Rabbit et al., 1996. In these studies, a constant finding has been the distinctive gender difference in the process of driving cessation. Women drivers are more likely than men to voluntarily give up driving, at a younger age, and in better health Gallo et al., 1999, Hakamies-Blomqvist & Wahlström, 1998 and Rabbit et al., 1996. In other words, whereas men tend to keep on driving as long as their health allows them to, women give up driving for various, less pressing reasons (Hakamies-Blomqvist & Wahlström, 1998). This gender difference has significant impact on both safety and mobility. Voluntary driving cessation of older drivers has mostly been discussed as positive behavior implying good judgment (Persson, 1993), without considering possible negative implications. Previous studies focusing on the consequences of driving cessation have, however, shown it to be related to personal mobility loss and decrease in out-of-home activities (Marottoli et al., 2000), along with increased depressive symptoms (Marottoli et al., 1997). In addition, most available alternatives for car driving are less safe for older persons (OECD, 2001). Therefore, voluntary driving cessation at a relatively early old age may indeed be problematic because it may restrict mobility without increasing safety. Since early retirement from the wheel mainly concerns older women, the underlying reasons and components for the found gender difference become essential in preventing early driving cessation and mobility loss of older women. In social and behavioral sciences, the socially constructed nature of most gender differences is emphasized. That is, such differences are based and constructed upon the social roles and positions of genders in the social realm. Thereby they can also be deconstructed and unraveled beyond the plain term “gender.” Since higher level complex behavioral patterns (i.g. driving behavior) can hardly originate to gender per se, attempts to deconstruct the concept “gender” may be especially appropriate when dealing with apparent differences between women and men in traffic. A social constructionist approach has, however, rarely been applied in the field of traffic research. Neither has the commonly found gender difference in driving cessation been analyzed or conceptualized any further. On the few occasions in literature when there have been attempts to explain this difference, this has been loosely done and not well anchored in relevant empirical findings. Speculative explanations have included references to, for example, psychological (Burkhardt, Berger, & McGavok, 1996) or physical (Campbell et al., 1993) differences between the genders and, implicitly, to women- and men-like driving habits Burkhardt et al., 1996 and Gallo et al., 1999. The aim of the present study is to gain a deeper and more detailed understanding of older female drivers' driving cessation. We chose to do this in a within-gender setting by comparing women who gave up versus renewed their license at the age of 70 years. The aim was not to replicate the common gender effect finding, but rather to understand the factors that lead to an older woman voluntarily ending her driving career as opposed to sticking to her license “like a man.” The study's focus was on driving habits and experience.