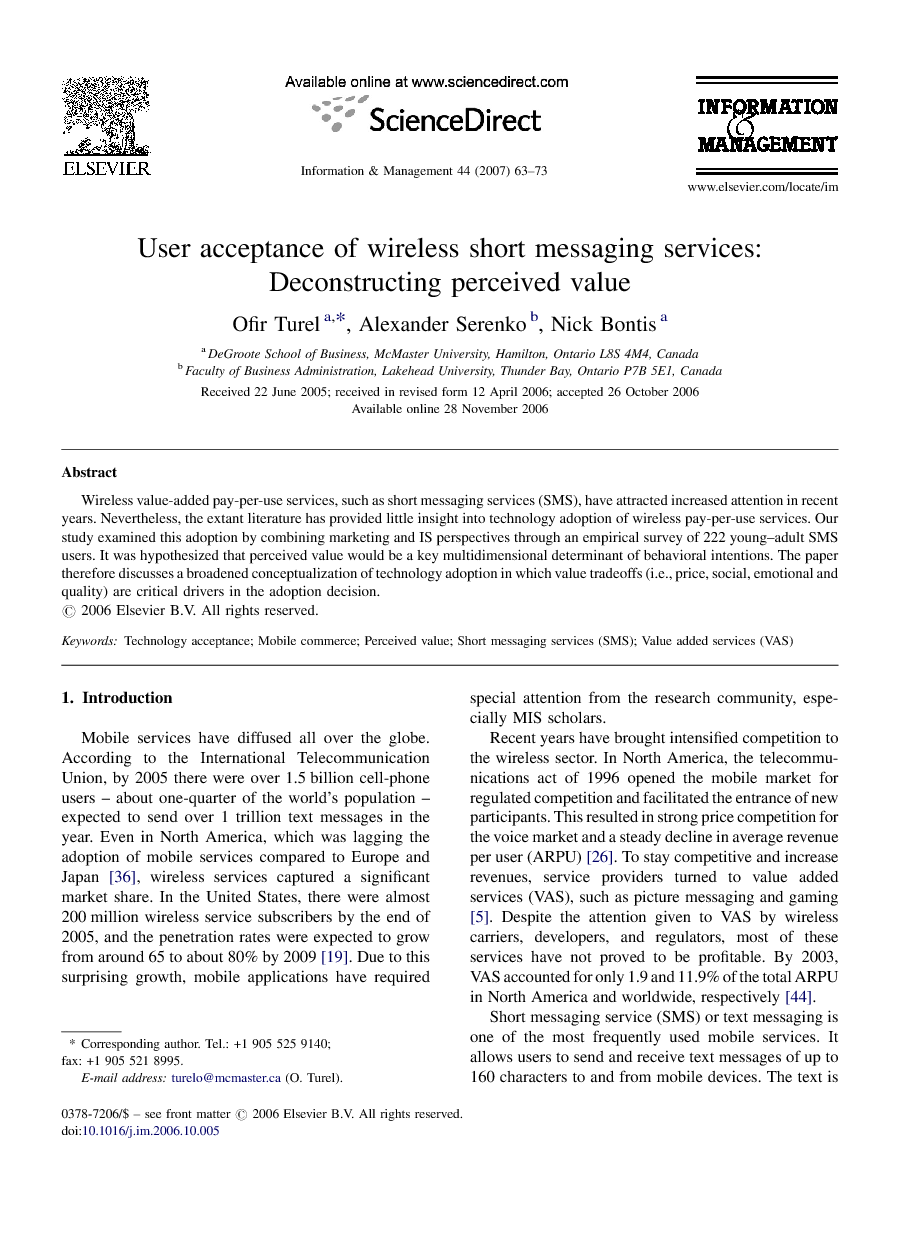 Wireless value-added pay-per-use services, such as short messaging services (SMS), have attracted increased attention in recent years. Nevertheless, the extant literature has provided little insight into technology adoption of wireless pay-per-use services. Our study examined this adoption by combining marketing and IS perspectives through an empirical survey of 222 young–adult SMS users. It was hypothesized that perceived value would be a key multidimensional determinant of behavioral intentions. The paper therefore discusses a broadened conceptualization of technology adoption in which value tradeoffs (i.e., price, social, emotional and quality) are critical drivers in the adoption decision.

Mobile services have diffused all over the globe. According to the International Telecommunication Union, by 2005 there were over 1.5 billion cell-phone users – about one-quarter of the world's population – expected to send over 1 trillion text messages in the year. Even in North America, which was lagging the adoption of mobile services compared to Europe and Japan [36], wireless services captured a significant market share. In the United States, there were almost 200 million wireless service subscribers by the end of 2005, and the penetration rates were expected to grow from around 65 to about 80% by 2009 [19]. Due to this surprising growth, mobile applications have required special attention from the research community, especially MIS scholars. Recent years have brought intensified competition to the wireless sector. In North America, the telecommunications act of 1996 opened the mobile market for regulated competition and facilitated the entrance of new participants. This resulted in strong price competition for the voice market and a steady decline in average revenue per user (ARPU) [26]. To stay competitive and increase revenues, service providers turned to value added services (VAS), such as picture messaging and gaming [5]. Despite the attention given to VAS by wireless carriers, developers, and regulators, most of these services have not proved to be profitable. By 2003, VAS accounted for only 1.9 and 11.9% of the total ARPU in North America and worldwide, respectively [44]. Short messaging service (SMS) or text messaging is one of the most frequently used mobile services. It allows users to send and receive text messages of up to 160 characters to and from mobile devices. The text is entered by using a phone keypad or PC keyboard, and it may consist of words, numbers, or alphanumeric combinations. SMS was created as part of the Global Standard for Mobile Services (GSM) Phase 1 standard. It uses the network-signaling channel for data transmitting and receiving. Thus, from a service providers’ perspective, SMS is an efficient communication medium which does not consume voice-communication channels and resources. Currently, SMS is the main revenue generator within the mobile VAS domain [38]. The monthly global usage volume has grown from close to zero in 1999, to over 24 billion messages in 2003 [23]. Although Third Generation services promise even more innovative VAS, industry professionals forecast that person-to-person communications (picture messaging, instant messaging, etc.) will account for 46% of VAS revenues in 2009, out of which, 50% will still be generated by SMS [41]. While almost any cell-phone user can utilize SMS these days, the teen/youth (ages 11–17 years) and young–adult (ages 18–25 years) markets lead their adoption and use. A survey of over 2000 users showed that 27% of North American teens and 43% of North American young adults used wireless text messaging at least once a month [6]. Since the young–adult group is the largest user segment, our study focused on these users. User acceptance of SMS cannot be fully explained by the technology adoption models that already exist. A significant body of research supports the view that the use of any specific IS is determined by behavioral intentions to use it, whereas behavioral intentions are determined by users’ perceptions regarding the system. The Theory of Reasoned Action (TRA) [20], the Theory of Planned Behavior (TPB) [1] and the Technology Acceptance Model (TAM) [15] are the most commonly applied ways of analyzing the behavior and perceptions of IS users. The validity and explanatory power of these models have been examined across many systems and contexts [28]. All of the contexts, however, have included applications and devices which were free for individual users, or for which they paid a one-time fee, with the daily use free of charge. In sharp contrast, SMS users are often charged for every text message sent. Therefore, additional factors should be considered. In our study, we assumed that an overall assessment of value was a key determinant of behavioral intentions to employ pay-per-use information services, especially for SMS. While previous projects have examined only the monetary value dimension of mobile services (e.g., [47]), we assumed a broader view of value that included not only monetary but also emotional, social, and performance dimensions. To operationalize this broad view, the multidimensional ‘perceived value’ concept developed by Sweeney and Soutar [42] was adapted from marketing research; and its aggregated effect on the behavioral intentions of young adults to use SMS was examined through quantitative analyses of survey-based data. Thus, the following research questions were addressed in our investigation: RQ1 Does the perceived value of short messaging services (i.e., the consumer's overall assessment of the utility of SMS based on perceptions of what is received and what is given) positively affect an individual's intentions to use them? RQ2 What are the key value components that drive the adoption of short messaging services? Overall, the convergence of marketing and MIS views was assumed to form a better understanding of SMS usage drivers by identifying important value dimensions in its adoption. Moreover, it was believed that our investigation would allow us to develop the theoretical foundations that explained the behavioral usage intentions towards IS under pay-per-use conditions, and to determine how and when value perceptions beyond efficiency and effectiveness were involved.

The industry of mobile value added services, such as picture messaging and gaming, is growing. In order to foster the acceptance of these services, it is important to understand the underlying motives of user behavior. Our study enhanced understanding of the interaction of users with mobile value added services and provided valuable insights for industry professionals. With a quarter of the world already penetrated by mobile phone users, SMS use is exploding. The potential in North America and China is staggering.With the right vision, and bold, forward-thinking strategies, SMS providers stand to realize enormous gains. SMS has become a commodity offering: one where demand is still growing. Telecom executives will always look for ways to drive down the cost of service delivery. This will free up resources that can be routed towards developing new and innovative VAS that will help secure their position in the marketplace