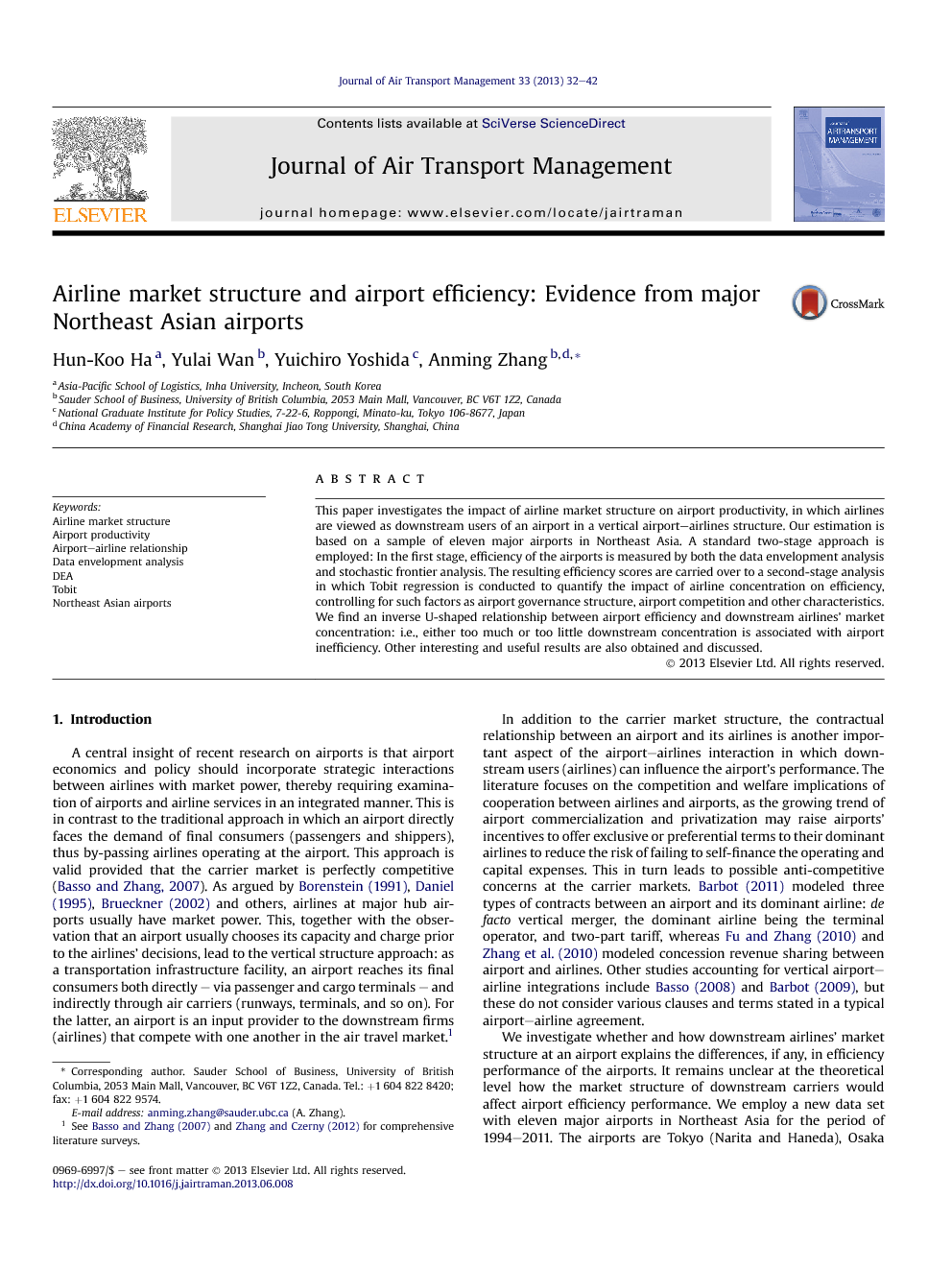 This paper investigates the impact of airline market structure on airport productivity, in which airlines are viewed as downstream users of an airport in a vertical airport–airlines structure. Our estimation is based on a sample of eleven major airports in Northeast Asia. A standard two-stage approach is employed: In the first stage, efficiency of the airports is measured by both the data envelopment analysis and stochastic frontier analysis. The resulting efficiency scores are carried over to a second-stage analysis in which Tobit regression is conducted to quantify the impact of airline concentration on efficiency, controlling for such factors as airport governance structure, airport competition and other characteristics. We find an inverse U-shaped relationship between airport efficiency and downstream airlines' market concentration: i.e., either too much or too little downstream concentration is associated with airport inefficiency. Other interesting and useful results are also obtained and discussed.

A central insight of recent research on airports is that airport economics and policy should incorporate strategic interactions between airlines with market power, thereby requiring examination of airports and airline services in an integrated manner. This is in contrast to the traditional approach in which an airport directly faces the demand of final consumers (passengers and shippers), thus by-passing airlines operating at the airport. This approach is valid provided that the carrier market is perfectly competitive (Basso and Zhang, 2007). As argued by Borenstein (1991), Daniel (1995), Brueckner (2002) and others, airlines at major hub airports usually have market power. This, together with the observation that an airport usually chooses its capacity and charge prior to the airlines' decisions, lead to the vertical structure approach: as a transportation infrastructure facility, an airport reaches its final consumers both directly – via passenger and cargo terminals – and indirectly through air carriers (runways, terminals, and so on). For the latter, an airport is an input provider to the downstream firms (airlines) that compete with one another in the air travel market.1 In addition to the carrier market structure, the contractual relationship between an airport and its airlines is another important aspect of the airport–airlines interaction in which downstream users (airlines) can influence the airport's performance. The literature focuses on the competition and welfare implications of cooperation between airlines and airports, as the growing trend of airport commercialization and privatization may raise airports' incentives to offer exclusive or preferential terms to their dominant airlines to reduce the risk of failing to self-finance the operating and capital expenses. This in turn leads to possible anti-competitive concerns at the carrier markets. Barbot (2011) modeled three types of contracts between an airport and its dominant airline: de facto vertical merger, the dominant airline being the terminal operator, and two-part tariff, whereas Fu and Zhang (2010) and Zhang et al. (2010) modeled concession revenue sharing between airport and airlines. Other studies accounting for vertical airport–airline integrations include Basso (2008) and Barbot (2009), but these do not consider various clauses and terms stated in a typical airport–airline agreement. We investigate whether and how downstream airlines' market structure at an airport explains the differences, if any, in efficiency performance of the airports. It remains unclear at the theoretical level how the market structure of downstream carriers would affect airport efficiency performance. We employ a new data set with eleven major airports in Northeast Asia for the period of 1994–2011. The airports are Tokyo (Narita and Haneda), Osaka (Kansai and Itami), Seoul (Incheon and Gimpo), Beijing Capital, Shanghai (Hongqiao and Pudong), Guangzhou and Hong Kong airports. A standard two-stage approach is applied: In the first stage, performances are measured by both the non-parametric method and the parametric method – with the former being data envelopment analysis (DEA) and the latter stochastic frontier approach (SFA). The obtained efficiency scores are carried over to a second-stage regression analysis for estimating the impact of airline market structure on efficiency scores. After controlling for such factors as airport governance structure, airport competition and other airport characteristics, we uncover an inverse U-shaped relationship between an airport's efficiency and the market concentration of airlines operating from the airport: i.e., either too much or too little airline concentration is associated with airport inefficiency. Other interesting and useful results are also obtained and discussed in Section 4. Assessment of airport productivity has become the focus of numerous studies. Different methodologies have been used to measure productivity of airports, including the widely used the DEA and SFA approaches.2Liebert and Niemeier (2013) provide a comprehensive literature review on various methods for airport efficiency measures, including both DEA and SFA. They list major influential factors of airport efficiency studied so far, including airport governance structure, airport competition, outsourcing, non-aeronautical activities, hub or scale effects and traffic composition. However, none of the existing efficiency studies have explicitly investigated the impact of carrier market structure on airport efficiency.3

Recent theoretical work on airport–airlines vertical relationships does not provide a clear prediction regarding how the market structure of downstream carriers would affect airport efficiency. In this paper we have used a two-stage approach to investigate the effects of downstream airline market structure and other factors on airport efficiency. Our estimation is based on a sample of eleven major airports in Northeast Asia and the efficiency scores are obtained from both the data envelopment analysis (DEA) and stochastic frontier analysis (SFA). The predictions of DEA models and SFA models are largely consistent. The sample airports have on average experienced a slight efficiency decrease over the sample period of 1994–2011, with large drops during 2001–2003 and 2008–2009 due to events such as the September-11 terrorist attack, SARS outbreak and the recent US financial crisis. We also found that the technical efficiency of major Northeast Asian airports is negatively correlated with decentralization of airport ownerships and operations, but that strong airport competition does lead to higher airport efficiency. The impact of open-sky arrangements is ambiguous. Furthermore, Chinese airports in general have lower efficiency scores than the airports in South Korea, Japan and Hong Kong, due largely to their lower labor productivity. More significantly, our analysis uncovered an inverse U-shaped relationship between airport efficiency and downstream airlines' market concentration: i.e., either too much or too little downstream concentration is associated with airport inefficiency.