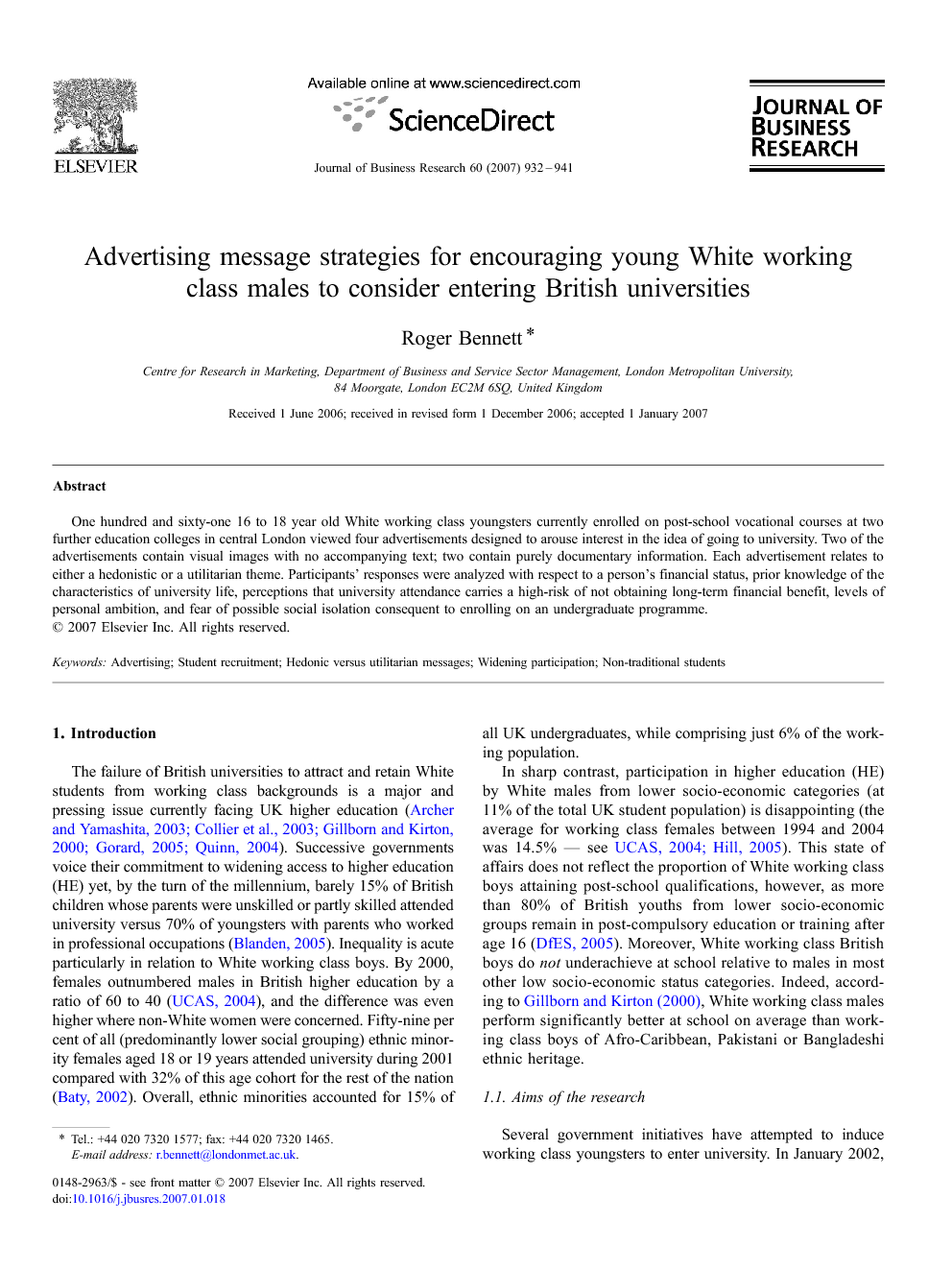 One hundred and sixty-one 16 to 18 year old White working class youngsters currently enrolled on post-school vocational courses at two further education colleges in central London viewed four advertisements designed to arouse interest in the idea of going to university. Two of the advertisements contain visual images with no accompanying text; two contain purely documentary information. Each advertisement relates to either a hedonistic or a utilitarian theme. Participants' responses were analyzed with respect to a person's financial status, prior knowledge of the characteristics of university life, perceptions that university attendance carries a high-risk of not obtaining long-term financial benefit, levels of personal ambition, and fear of possible social isolation consequent to enrolling on an undergraduate programme.

The failure of British universities to attract and retain White students from working class backgrounds is a major and pressing issue currently facing UK higher education (Archer and Yamashita, 2003, Collier et al., 2003, Gillborn and Kirton, 2000, Gorard, 2005 and Quinn, 2004). Successive governments voice their commitment to widening access to higher education (HE) yet, by the turn of the millennium, barely 15% of British children whose parents were unskilled or partly skilled attended university versus 70% of youngsters with parents who worked in professional occupations (Blanden, 2005). Inequality is acute particularly in relation to White working class boys. By 2000, females outnumbered males in British higher education by a ratio of 60 to 40 (UCAS, 2004), and the difference was even higher where non-White women were concerned. Fifty-nine per cent of all (predominantly lower social grouping) ethnic minority females aged 18 or 19 years attended university during 2001 compared with 32% of this age cohort for the rest of the nation (Baty, 2002). Overall, ethnic minorities accounted for 15% of all UK undergraduates, while comprising just 6% of the working population. In sharp contrast, participation in higher education (HE) by White males from lower socio-economic categories (at 11% of the total UK student population) is disappointing (the average for working class females between 1994 and 2004 was 14.5% — see UCAS (Universities and Colleges Admissions Service), 2004 and Hill, 2005). This state of affairs does not reflect the proportion of White working class boys attaining post-school qualifications, however, as more than 80% of British youths from lower socio-economic groups remain in post-compulsory education or training after age 16 (DfES, 2005). Moreover, White working class British boys do not underachieve at school relative to males in most other low socio-economic status categories. Indeed, according to Gillborn and Kirton (2000), White working class males perform significantly better at school on average than working class boys of Afro-Caribbean, Pakistani or Bangladeshi ethnic heritage.

Visualization strategies have substantial potential for informing and arousing interest among members of this particular target audience in the idea of attending university. Pictorially-based executions evoked higher responses than the documentary advertisements for both the hedonistic and the utilitarian versions. The pictures seem to transmit information relatively easily and help the viewer mentally experience what was on offer. Presumably, visual advertisements made the prospect of university attendance appear more tangible to the sample members. The visual-utilitarian version was especially effective for influencing youngsters with little prior knowledge of university life. Participants regarded the documentary-utilitarian advertisement as less informative and less interest arousing than any of the other versions. However, the documentary execution (as predicted) fared better in the hedonistic context. In general the hedonistic versions were more effective than the utilitarian advertisements. The utilitarian executions were less likely to affect participants from financially poor families, implying that concerns regarding possible financial hardship while attending university may represent a major factor inhibiting the willingness of White working class boys to contemplate the idea of progressing to a university course. The regression analysis indicates that youngsters fearing that they would experience social isolation if they entered university were more responsive to the visual-hedonistic execution than individuals not fearing social isolation. Perceptions of the levels of risk associated with going to university failed to attain statistical significance (p < .05) in any of the regressions. Possibly, very few of the sample members had assessed risk factors in a conscious and systematic manner, resulting in little variation in the data relating to this variable. Additional research would be useful regarding this matter.