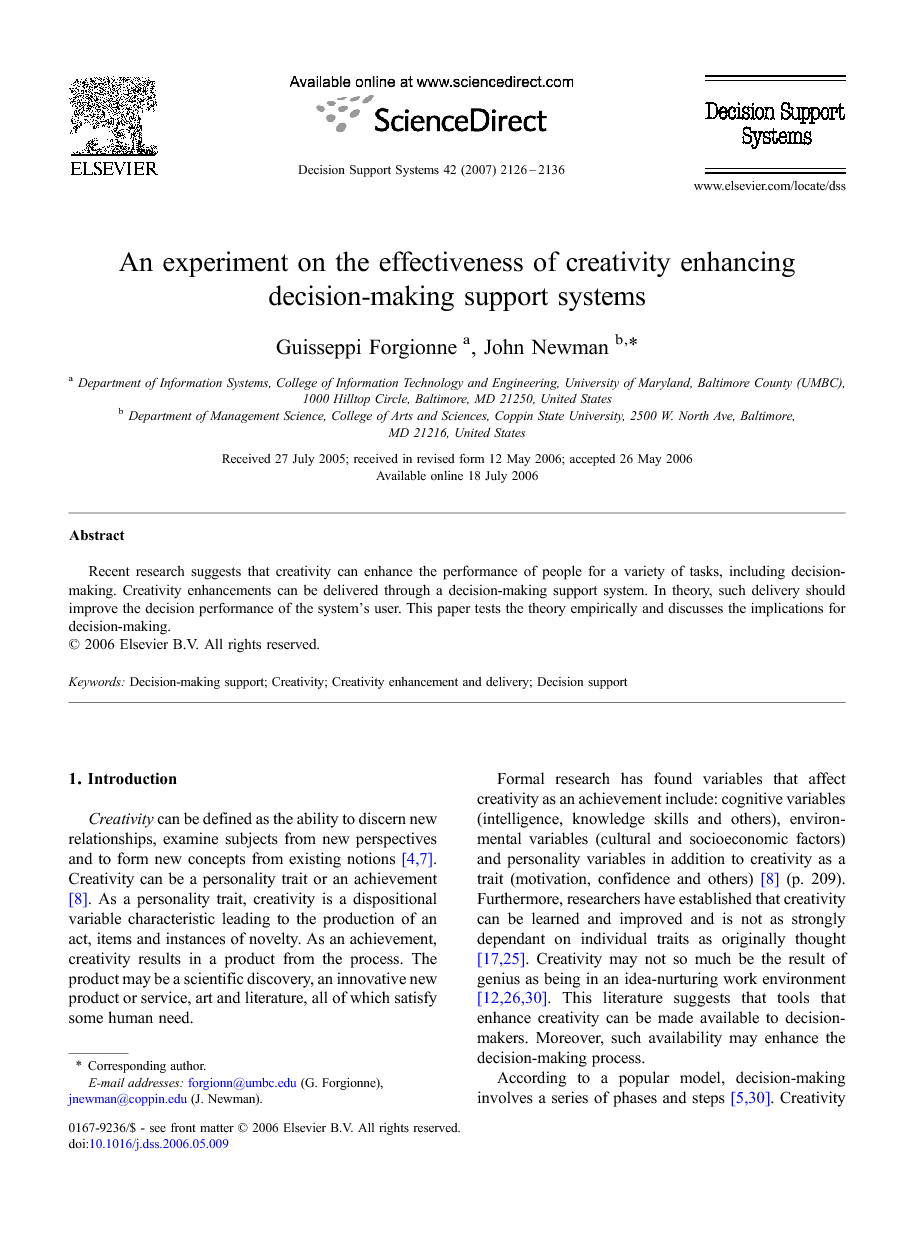 Creativity can be defined as the ability to discern new relationships, examine subjects from new perspectives and to form new concepts from existing notions [4] and [7]. Creativity can be a personality trait or an achievement [8]. As a personality trait, creativity is a dispositional variable characteristic leading to the production of an act, items and instances of novelty. As an achievement, creativity results in a product from the process. The product may be a scientific discovery, an innovative new product or service, art and literature, all of which satisfy some human need. Formal research has found variables that affect creativity as an achievement include: cognitive variables (intelligence, knowledge skills and others), environmental variables (cultural and socioeconomic factors) and personality variables in addition to creativity as a trait (motivation, confidence and others) [8] (p. 209). Furthermore, researchers have established that creativity can be learned and improved and is not as strongly dependant on individual traits as originally thought [17] and [25]. Creativity may not so much be the result of genius as being in an idea-nurturing work environment [12], [26] and [30]. This literature suggests that tools that enhance creativity can be made available to decision-makers. Moreover, such availability may enhance the decision-making process. According to a popular model, decision-making involves a series of phases and steps [5] and [30]. Creativity is useful during most of these phases and steps. For example, creativity can assist in problem design by helping the decision-maker to identify relevant alternatives during the design phase of the process [13], [20] and [24]. In addition, the selection of an appropriate evaluation model is a creative process, involving the matching of problem characteristics with existing models or the construction of a model that describes the problem accurately. Hence, creativity can facilitate the choice phase of decision-making [16] and [23]. There has been evidence that creativity enhances the performance of persons in a variety of tasks, including decision-making [14], [16], [19] and [29]. However, decision-makers may be unaware, and/or lack proficiency in the use, of creativity enhancing tools. It may be useful, then, to deliver the creativity enhancing support through an information system. In theory, such delivery should improve the effectiveness of decision-making support. This paper tests the theory. First, the paper presents a creativity-enhanced decision-making support system. Next, there is an empirical analysis of the system concept. Then, the paper discusses the study's implications for decision-making support.

The broad conclusion from the conducted experimental study is that the CDMSS, relative to the DSS and no decision aid groups, helps improve the process of, and outcome from, decision-making. Moreover, the improvement occurs because decision-maker can generate more ideas through the CDMSS than with any of the other tested systems. Ideas facilitate intelligence, design, choice and implementation in decision-making. The results imply that the creativity-enhanced concept is superior to traditional decision support system approaches in guiding the decision-maker toward an effective policy or strategy. This conclusion supports the findings from previous studies. The reported AIRLINE study involved a different decision problem and different creativity enhancing tools than the previous studies, and each of the previous studies involved disparate decision situations and disparate creativity enhancing tools. The commonality of findings, then, suggests that the theory has validity across various decision situations. Unlike the previous studies, the AIRLINE study established an explicit and precise relationship between the process improvement and outcome enhancement. In particular, the AIRLINE's regression equation can be used to establish the dollar value of process improvements, thereby establishing an imputed economic value for CDMSS delivered process support. The regression equation can also be used to evaluate the relative value of competing process improvements. These explicit and precise relationships offer an objective basis for system design and strategic planning. There are some limits on these conclusions. The number of users in the AIRLINE study is small and the user group itself is limited in scope. Doing further studies with larger sampled, more diverse users can alleviate this limitation. In addition, the AIRLINE study had a limited number of outcome and process measures. Further studies should include additional criteria. Moreover, the multiple criteria could conflict. Hence, it would be desirable to consolidate the multiple criteria into an overall measure of decision value. Despite these limitations, this study does indicate that the creativity-enhanced decision-making support system concept has considerable promise and deserves further study.