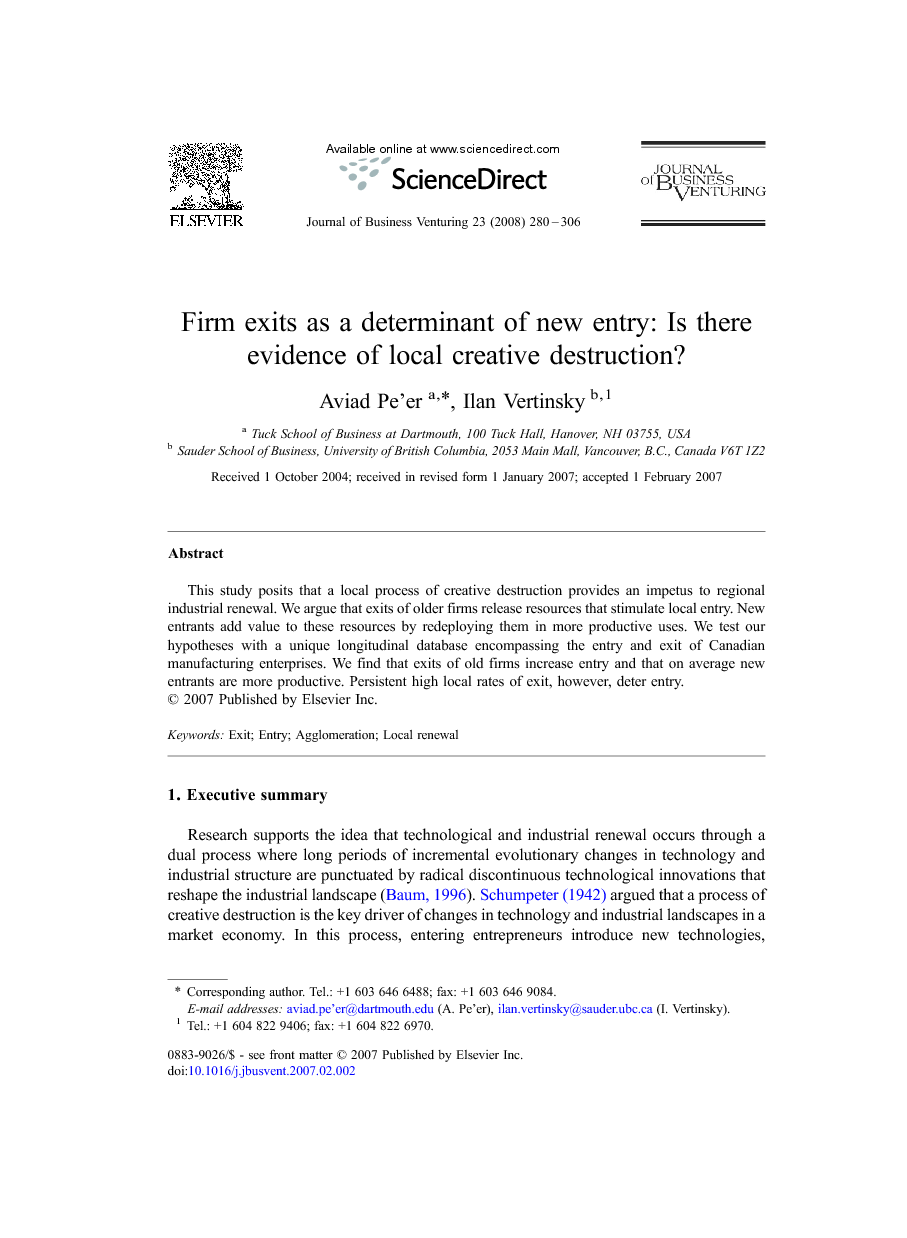 This study posits that a local process of creative destruction provides an impetus to regional industrial renewal. We argue that exits of older firms release resources that stimulate local entry. New entrants add value to these resources by redeploying them in more productive uses. We test our hypotheses with a unique longitudinal database encompassing the entry and exit of Canadian manufacturing enterprises. We find that exits of old firms increase entry and that on average new entrants are more productive. Persistent high local rates of exit, however, deter entry.

The market must clean itself out by taking resources away from the losers, so it creatively destroys the losing companies and reallocates resources to new companies”. Former US House of Representatives Majority Leader Dick Armey (March 2002) The 21st century ushered in a shift from an economy where innovative activities by large established firms were the prime cause of economic development (Schumpeter 1954) to an economy where entrepreneurs play a key role in economic growth and renewal (Schumpeter, 1942 and Audretsch and Thurik, 2001). This new economy, ‘the entrepreneurial economy’, is driven by innovation processes through which entrepreneurs entering the market constantly seek to fill unmet demands or meet demands in more effective ways. Schumpeter (1942) suggested that through their innovations entrepreneurs that enter the market render their rivals obsolete, destroy their profits and lead them to exit. This process of creative destruction, facilitated by episodic switches in technological regimes and markets throughout the economy, was posited by Schumpeter to be the key endogenous driver of economic growth in capitalistic systems. Recently, several studies have linked measures of regional entrepreneurial activity to regional economic growth (e.g. Audretsch and Fritsch, 2002 and Acs and Armington, 2004), suggesting the possibility that in addition to the global Schumpeterian process of creative destruction, there are processes of industrial renewal at the local level driven by entrepreneurial entry. The overarching research questions of this paper are: does a process of creative destruction, distinct from the Schumpeterian process, exist at a local level? What are the dynamics of this process? Is it bounded geographically? We integrate perspectives from evolutionary economics, organizational ecology, and entrepreneurship to articulate the characteristics of a process of local creative destruction, its spatial boundaries and its temporal underpinning (i.e., short-run versus long-run drivers). We test our key assumptions through three interrelated hypotheses. To test the hypotheses we estimate Zero-inflated Poisson (ZIP) models of entry events belonging to five manufacturing sectors in Canada between 1984 and 1998 at the census subdivision level. We use a unique database made available by Statistics Canada that accurately identifies firm entries and exits. In addition, we compare estimates of productivity of firms that enter and exit. Our study informs several important areas of investigation in the entrepreneurship literature. First, we contribute to the debate over whether failure is good (Knott and Posen, 2005). Davidsson (2003: 42) argues that “…one of the first things entrepreneurship scholars should try to get rid of is the bias against failure… both theory and empirical evidence suggest that experimentation that may end in failure as well as the demise of less effective actors are necessary parts of a well-functioning market economy.” Knott and Posen (2005: 617) explore whether “… the same creative destruction process fueled by successful ventures may also be fueled by unsuccessful ventures.” In this paper we provide evidence that failure of older firms promotes the birth of new ones and that new entrants contribute to improvements in productivity.2 We show that this process operates in small geographical areas. Second, we provide some insight into the question of why locations differ in their propensity for entrepreneurial activity (Low and MacMillan, 1988 and Shane and Venkataraman, 2000). We estimate the magnitude of the impact of some key location characteristics (e.g., agglomeration, competition) and the characteristics of neighboring locations on entry. We show that localization economies (resulting from sectoral co-location) dominate urbanization economies (derived from industrial diversity) in attracting entrepreneurial entry to a location, and that in most sectors local competition tends to reduce entry. Third, we contribute to key issues in the emergent fields of entrepreneurial geography and cluster dynamics (e.g., Baum and Sorenson, 2003 and Audretsch and Feldman, 1996). The existence of high correlation between entry and exit rates in many countries is well documented (e.g., Dunne et al., 1988, Eaton and Lipsey, 1980 and Cable and Schwalbach, 1991). These correlations are attributed, in the organizational ecology and economic literature, to causal links flowing from entry to exit (Geroski, 1995). These links include the ‘liability of newness’, the relationship between entry and exit barriers, and adverse selection. We show that in small geographical areas other links between exit and entry exist and that these links may operate differently depending on their temporal dimension. Understanding both why firms choose specific locations and the dynamics of exit and entry, particularly its spatial dimensions, may help policymakers understand better the process of regional growth and renewal. Our results highlight the positive aspects of firms' exits in improving regional productivity, effects that could be suppressed when government support is provided to failing firms.