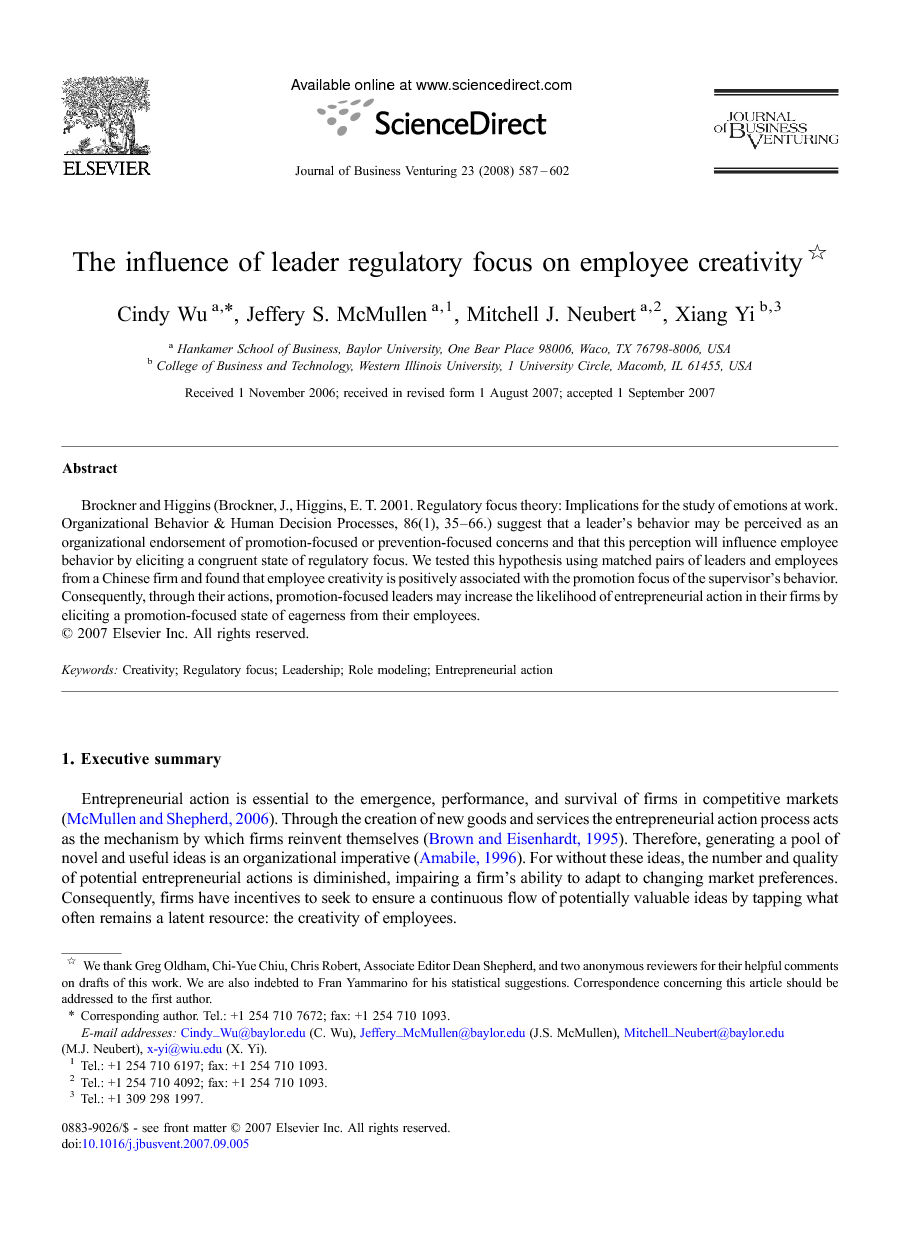 Brockner and Higgins (Brockner, J., Higgins, E. T. 2001. Regulatory focus theory: Implications for the study of emotions at work. Organizational Behavior & Human Decision Processes, 86(1), 35–66.) suggest that a leader's behavior may be perceived as an organizational endorsement of promotion-focused or prevention-focused concerns and that this perception will influence employee behavior by eliciting a congruent state of regulatory focus. We tested this hypothesis using matched pairs of leaders and employees from a Chinese firm and found that employee creativity is positively associated with the promotion focus of the supervisor's behavior. Consequently, through their actions, promotion-focused leaders may increase the likelihood of entrepreneurial action in their firms by eliciting a promotion-focused state of eagerness from their employees.

Novelty and usefulness are the “lifeblood of entrepreneurship” and the hallmarks of creative ideas (Ward, 2004). Creativity is essential for organizational performance (Amabile, 1996), especially in highly innovative industries in which firms must compete by continually introducing new goods and services (Eisenhardt and Tabrizi, 1995, Lumpkin and Dess, 1996 and Lumpkin and Lichtenstein, 2005). Because new goods and services are the result of entrepreneurial actions that are initiated by individuals (McMullen and Shepherd, 2006), stimulating and engaging employee creativity is a necessity in today's competitive and changing business environment (Corbett, 2005, Corbett, 2007, Dess and Pickens, 2000, Lumpkin et al., 2004 and Mumford et al., 2002). Depending on industries, job requirements, and product markets, the level of creativity required may vary; however, continuous improvement requires that virtually all jobs exhibit enough creativity to produce incremental adjustments if not radical breakthroughs (Shalley and Gilson, 2004). Because employee creativity serves as the foundation for organizational creativity (Amabile, 1988), there is much to be gained from an enhanced understanding of the factors that encourage or inhibit employee creativity (e.g., Shalley et al., 2004) and the entrepreneurial actions that it is likely to yield. Given the critical role of leadership in organizations, it is surprising that leadership in general has not been seen as a crucial influence on creativity (Amabile et al., 2004). Studies that have examined the influence of leadership on employee creativity have focused primarily on supervisory support (Oldham and Cummings, 1996, Cummings and Oldham, 1997, Shalley and Gilson, 2004, Shalley et al., 2004 and Madjar et al., 2002). Specifically, research has shown that employees demonstrate higher levels of creativity when leaders give informational and developmental evaluation and feedback (Zhou, 1998 and Zhou and Oldham, 2001), provide encouragement (Frese et al., 1999), avoid close monitoring (George and Zhou, 2001 and Zhou, 2003), develop quality leader-member exchange relationships (LMX) (Scott and Bruce, 1994 and Tierney et al., 1999), demonstrate transformational leadership behaviors (Shin and Zhou, 2003), and enhance employee creative self-efficacy (Tierney and Farmer, 2002 and Tierney and Farmer, 2004). These studies have investigated the specific behaviors used by leaders as they seek to support or reward creativity in employees through direct interactions. Despite the fact that creativity does not “spring from a vacuum” (Bandura, 1986:105) and that “modeling probably contributes most to creative development” (Bandura, 1986:105), little attention has been devoted to the indirect channels, such as the socio-cognitive influence of role modeling, by which leaders influence the creative behavior of employees (Shalley and Gilson, 2004). Social cognitive theory suggests that individuals learn by observing role models and regulating cognitive resources to replicate the observed behavior (Bandura, 1986). When the observed models are high in status or power, their behavior is more likely to be attended to and replicated because it conveys expectations and approved norms (Bandura, 1986). Particularly, Brockner and Higgins (2001) proposed that leadership's behavior may be perceived as an endorsement of promotion-focused assumptions which then encourages creative behavior by eliciting promotion focus from employees. Introduced by Higgins (1997), Regulatory Focus Theory (RFT) delineates two orthogonal self-regulatory systems (or mindsets), known as promotion focus and prevention focus, that influence individuals' behavioral preferences. At any point in time, both systems exist, yet one system dominates the other because of either situational triggers (Crowe and Higgins, 1997) or a chronic tendency when strong situational cues are absent (Higgins et al., 1994).4 Elicited by an emphasis on growth and development needs, the achievement of gains, or the attainment of ideals (wishes and aspirations), promotion focus allocates attention primarily to the benefits of success and the costs of failing to succeed (Crowe and Higgins, 1997). In contrast, prevention focus is evoked by an emphasis on security needs, the avoidance of losses, or the fulfillment of obligations (duties and responsibilities). It, therefore, allocates attention primarily to the benefits of avoiding failure and the costs of making a mistake (Crowe and Higgins, 1997). In organizations, promotion focus encourages eagerness, which alters preferences such that individuals engage in more innovation and creativity (Förster et al., 2004) and become more likely to form intentions to engage in entrepreneurial action (McMullen and Shepherd, 2002 and McMullen et al., 2007). In contrast, prevention focus encourages vigilance, which alters preferences to become more conservative and less likely to engage in creative behavior. Even though there is considerable experimental evidence that regulatory focus can be intentionally elicited from people to influence predictably the likelihood of certain behaviors, there have been remarkably few studies that have delineated the antecedents of people's regulatory focus (Brockner and Higgins, 2001 and Lee et al., 2000). Moreover, studies that have examined the relationship between leadership behaviors and creative behavior have remained silent and neutral regarding the regulatory orientation of these behaviors. Thus, “future research needs to evaluate whether organizational authorities also serve as role models to their followers in shaping the latter's regulatory focus” (Brockner and Higgins, 2001:58). In fact, Brockner and Higgins (2001) call for future research to “redress these deficiencies” (61) stating that “therein lies an important mandate for future research” (57). In response to their call, this article examined the relationship between the regulatory focus of leaders' behavior and employees' creative behavior. First, we adapted a measure of chronic regulatory focus to assess employees' perceptions of their leader's regulatory focus. Second, we drew upon social cognitive theory (Bandura, 1986) and regulatory focus theory (Higgins, 1997) to develop and test our hypotheses on 70 matched pairs of leaders and employees from a Chinese high-technology firm that specializes in permanent magnetic materials. Consistent with RFT, we delineated the leaders' regulatory focus in terms of promotion focus and prevention focus and hypothesized that employees would exhibit more creative behavior as the promotion focus of leadership increases. Conversely, we expected that increases in the prevention focus of leadership would be met with less creative behavior by employees. Moreover, we tested these hypotheses after controlling for employees' chronic regulatory focus. We seek to contribute to the literature by (1) introducing a socio-cognitive explanation of how leadership influences employee creativity, (2) developing a measure of an employee's perception of the regulatory focus of a leader, and (3) examining whether the promotion- or prevention focus of this leader is associated with employees' creative behavior.

The means by which leaders enhance employee creativity has yet to be investigated thoroughly (Amabile et al., 2004). Despite the critical role of modeling in creativity (Bandura, 1986), current studies on leadership and employee creativity have focused on the direct influence of leaders' interactions between leaders and followers (e.g., Scott and Bruce, 1994, Tierney et al., 1999 and Shin and Zhou, 2003), rather than indirect influence of leaders' role modeling. The current study addresses this issue by examining the relationship between leadership promotion focus versus leadership prevention focus role modeling and employee creativity. Specifically, we developed a measure for the regulatory focus of leaders' behavior and found that promotion-focused leader behavior is positively related to employees' creative behavior. Our findings suggest that increases in the promotion focus of leaders' behavior elicit promotion focus in employees, which leads to increases in employees' creative behavior. The prevention focus of leadership, in contrast, did not exhibit significant relationships with creativity. In practical terms, leaders whose behavior manifests a promotion-focused philosophy, such as “Better to ask for forgiveness than permission,” are more likely to stimulate creativity than those with a prevention-focused philosophy, such as “Better safe than sorry.” These findings are consistent with the intrinsic motivation approach of creativity (e.g., Amabile, 1996, Shalley and Oldham, 1997 and Zhou, 2003), which contends that individuals demonstrate high levels of creativity when they are cognitively flexible, curious, playful, and willing to take risks. Because promotion focus also tends to elicit a flexible cognitive style, regulatory focus theory provides another avenue for explaining creativity that delineates a clear socio-cognitive underlying mechanism. Despite the significant influence of the leaders' promotion focus, leader prevention focus did not show any significant relationship with employees' creative behavior. These results may be attributed partly to the fact that the study was conducted in China; Eastern cultures have been shown to exhibit a bias for prevention focus (Lee et al., 2000). Therefore, high levels of prevention focus among Chinese leaders may be expected, whereas high levels of leader promotion focus may be considered a surprising deviation from a predominantly prevention-focused system. Such a surprising deviation is likely to receive more attention from employees and consequently have a greater priming effect. Regardless, the fact that leader promotion focus was significantly associated with employee creativity in a predominantly prevention-focused culture speaks to the robustness with which the promotion focus of a leader's behavior may elicit creative behavior from employees. The other possible explanation for the insignificant findings of leadership prevention focus could lie in the nature of the outcome variables. To date, laboratory studies have tended to induce a promotion focus or a prevention focus in participants and then examine the effect of this focus on the likelihood of “risky” behaviors, such as creativity (e.g., Friedman, and Förster, 2001). However, these “risky” behaviors are only consistent with promotion focus. Thus, theoretically speaking, it may be that prevention focus should not necessarily be expected to have any relationship (negative or otherwise) with this particular type of dependent variable. Arguably, what is needed is a second set of behaviors that are classifiable as “conservative” in nature (e.g., cost cutting initiatives), which would be associated positively with a prevention focus. For example, Liberman et al. (1999) found that prevention-focused participants demonstrated higher levels of persistence because of their emphasis on obligations and security. Future studies should identify behaviors that are more congruent with prevention focus and test the influence of leaders' prevention focus in predicting the occurrence of these behaviors among employees. This study also introduces the first survey measure of the regulatory focus of leadership. Despite the increasing attention to regulatory focus theory in workplace settings (Brockner and Higgins, 2001 and Brockner et al., 2004), regulatory focus has been examined almost exclusively in laboratory studies using experimental methods and samples of college students and has not yet been tested in a field setting. One possible explanation for the dearth of empirical field studies could be the lack of a measure suitable for the work setting. Future studies may wish to explore further the nomological net surrounding leadership regulatory focus by using the measure to investigate leadership's effect on employees' job satisfaction, organizational commitment, organizational citizenship behavior, or job performance. Accordingly, we offer the measure developed for this study as a first step in what we hope to be a continuing scholarly effort to extend RFT from the lab to the field. By combining the findings of the study with the results of CFA, this study also confirms that promotion focus and prevention focus are indeed two separable factors. The fact that no relationship was revealed between the leader's prevention focus and the employee's creativity further supports the notion that promotion focus and prevention focus are distinct constructs or continuums (as proposed by RFT), rather than ends of a single continuum as they are often depicted and operationalized in experimental designs. Another strength of this study is the use of data collected from multiple sources, supervisors, and employees. Obtaining outcome measures from supervisors and predictor variables from employees helps remove percept–percept inflation and therefore eliminates common method bias (Podsakoff et al., 2003). Using a larger sample to validate the leadership regulatory focus measure before testing the main hypotheses also contributes to confidence in the fidelity of our procedures. In testing the main hypotheses using paired-data, the significant findings for leadership promotion focus speak to the robustness of the relationship, which would be even easier to detect with a larger sample size.