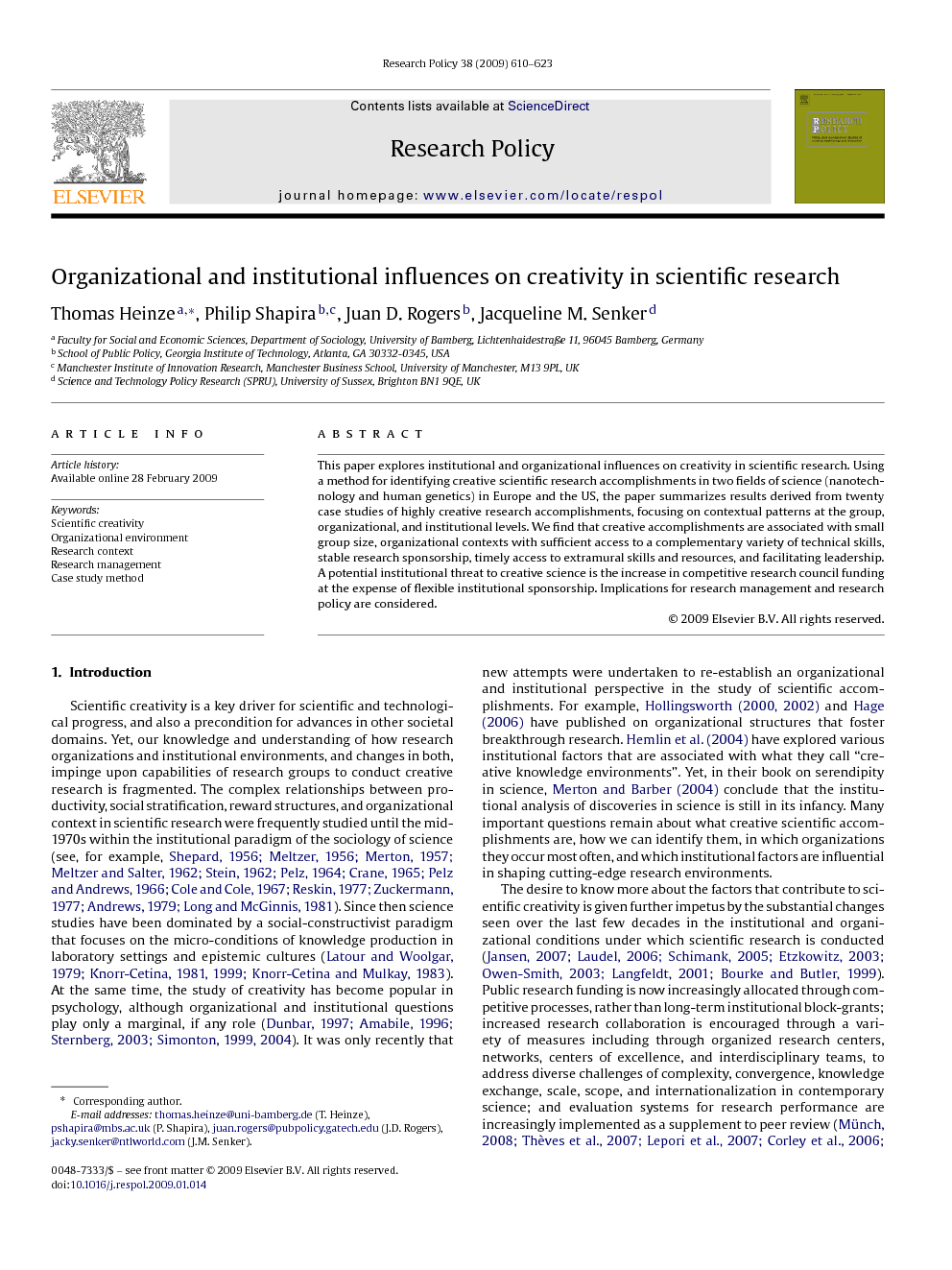 This paper explores institutional and organizational influences on creativity in scientific research. Using a method for identifying creative scientific research accomplishments in two fields of science (nanotechnology and human genetics) in Europe and the US, the paper summarizes results derived from twenty case studies of highly creative research accomplishments, focusing on contextual patterns at the group, organizational, and institutional levels. We find that creative accomplishments are associated with small group size, organizational contexts with sufficient access to a complementary variety of technical skills, stable research sponsorship, timely access to extramural skills and resources, and facilitating leadership. A potential institutional threat to creative science is the increase in competitive research council funding at the expense of flexible institutional sponsorship. Implications for research management and research policy are considered.

Scientific creativity is a key driver for scientific and technological progress, and also a precondition for advances in other societal domains. Yet, our knowledge and understanding of how research organizations and institutional environments, and changes in both, impinge upon capabilities of research groups to conduct creative research is fragmented. The complex relationships between productivity, social stratification, reward structures, and organizational context in scientific research were frequently studied until the mid-1970s within the institutional paradigm of the sociology of science (see, for example, Shepard, 1956, Meltzer, 1956, Merton, 1957, Meltzer and Salter, 1962, Stein, 1962, Pelz, 1964, Crane, 1965, Pelz and Andrews, 1966, Cole and Cole, 1967, Reskin, 1977, Zuckermann, 1977, Andrews, 1979 and Long and McGinnis, 1981). Since then science studies have been dominated by a social-constructivist paradigm that focuses on the micro-conditions of knowledge production in laboratory settings and epistemic cultures (Latour and Woolgar, 1979, Knorr-Cetina, 1981, Knorr-Cetina, 1999 and Knorr-Cetina and Mulkay, 1983). At the same time, the study of creativity has become popular in psychology, although organizational and institutional questions play only a marginal, if any role (Dunbar, 1997, Amabile, 1996, Sternberg, 2003, Simonton, 1999 and Simonton, 2004). It was only recently that new attempts were undertaken to re-establish an organizational and institutional perspective in the study of scientific accomplishments. For example, Hollingsworth, 2000 and Hollingsworth, 2002 and Hage (2006) have published on organizational structures that foster breakthrough research. Hemlin et al. (2004) have explored various institutional factors that are associated with what they call “creative knowledge environments”. Yet, in their book on serendipity in science, Merton and Barber (2004) conclude that the institutional analysis of discoveries in science is still in its infancy. Many important questions remain about what creative scientific accomplishments are, how we can identify them, in which organizations they occur most often, and which institutional factors are influential in shaping cutting-edge research environments. The desire to know more about the factors that contribute to scientific creativity is given further impetus by the substantial changes seen over the last few decades in the institutional and organizational conditions under which scientific research is conducted (Jansen, 2007, Laudel, 2006, Schimank, 2005, Etzkowitz, 2003, Owen-Smith, 2003, Langfeldt, 2001 and Bourke and Butler, 1999). Public research funding is now increasingly allocated through competitive processes, rather than long-term institutional block-grants; increased research collaboration is encouraged through a variety of measures including through organized research centers, networks, centers of excellence, and interdisciplinary teams, to address diverse challenges of complexity, convergence, knowledge exchange, scale, scope, and internationalization in contemporary science; and evaluation systems for research performance are increasingly implemented as a supplement to peer review (Münch, 2008, Thèves et al., 2007, Lepori et al., 2007, Corley et al., 2006, Shapira and Kuhlmann, 2003, Chompalov et al., 2002, van Leeuwen and Tijssen, 2000 and Henkel, 1999). In the context of heightened competitive pressures to foster science-driven business development and the rise of new global locations for research (especially China), research policymakers in developed economies hope that adjustments to research organizations and broader institutional environments for scientific research will not only promote more efficiency but also boost scientific excellence and creativity (Blau, 2005). There is an increasing need for recommendations about the design of science policy to support highly creative researchers and their groups. This paper explores factors which influence the ways in which research groups conduct their work. Besides features of the research group itself, such as size and career stage of group leaders, our main analytical and empirical focus is on organizational variables and the institutional environment in which these groups operate, such as leadership, funding structures, or competitive pressures. Our study is built on a longitudinal multi-method research design based on survey, interview, archive and bibliometric data, and uses both quantitative and qualitative research methods including as network and regression techniques, and in-depth interviews and case studies (Heinze et al., 2007 and Heinze and Bauer, 2007). We identified creative research accomplishments in two broad fields of science, analyzed why certain research groups are more creative than others, and investigated which factors in their work environment were influential for their accomplishments. We begin the paper by reviewing contributions to the literature on scientific creativity and by highlighting selected key issues important for further research (Section 2). Second, we introduce our methodology (Section 3). Third, we discuss in more detail the results from our case studies of highly creative research accomplishments, focusing particularly on findings related to organizational and institutional influences on scientific creativity including work group factors, such as size of research groups or communication patterns, and organizational features, such as sponsorship or disciplinary variety (Section 4). Then, we discuss our findings in the light of previous results, and we demonstrate how our findings improve our understanding of creative knowledge environments (Section 5). Finally, we consider the implications for research management and research policy (Section 6)

This paper uses the results of a new nomination method to select a set of highly creative scientific accomplishments in Europe and the United States in two scientific fields, nanotechnology and human genetics, in order to explore organizational and institutional factors associated with creative research. We employ a multiple-case study approach of twenty highly creative research accomplishments encompassing diverse types of scientific creativity. In these cases, we did not find remarkable differences by scientific field or creativity type; rather, the principal findings relate to mechanisms at the group, organizational, and institutional level. Several of these mechanisms are relevant for current policy making. In this section, we explore some of the lessons for research management and research policy. We collected evidence that a stimulating work context offers ample opportunities for fruitful scientific exchange, often across established cognitive domains. In contrast, the exploration mode is weakened when research groups are large and organized hierarchically. Despite this finding, large hierarchical groups can be found almost in every university and in every government laboratory. Large groups are either valued by research cultures (for example in Germany), or they emerge systematically because the predominant funding mechanism produces large structure after initial scientific successes (for example in the United Kingdom and the United States). Several of our case studies demonstrate that successful groups can grow substantially in a short time period (the Matthew effect, see Merton, 1957). Clearly, this mechanism is in conflict with the fact that breakthroughs are typically accomplished by small groups. Therefore, senior research management should be aware that highly creative research can be more difficult to undertake in large research groups, and that path-opening solutions in science seem to emerge more readily from small research units. The size of research groups should be considered an important management objective for effective research governance, particularly in new and frontier research areas. Policy makers also need to think about new mechanisms that relieve successful scientists from managing too many projects and too large groups, because large groups and hierarchical structures are barriers for creative research. Well-endowed research institutes with a good intellectual and material facilities infrastructure and access to a large diversity of skills and multidisciplinary knowledge provide numerous internal and external opportunities for stimulation, collaboration, the acquisition of new knowledge and research techniques, or access to instrumentation. Interactions within and across such organizational contexts are particularly fruitful when groups work in related and complementary fields of expertise and when research institutes have the requisite variety of skills and knowledge. Those involved in the planning of periodic reorganizations of research institutions should ensure that changes maintain and increase the breadth of disciplinary expertise available. Furthermore, the scientific diversity of research organizations may be more likely to support creativity if linked to organizational, social and spatial arrangements that support planned and unplanned multidisciplinary contact. Organizational opportunities may include multi-disciplinary or cross-unit seed research awards, lab staff rotations, cross-training and inter-unit seminars and exchanges. Spatial arrangements, such as the allocation of offices, junior research space, hallways, coffee bars or laboratory facilities, and social arrangements, such as lunchtime patterns, may also be organized so as to encourage the opportunities for communication across departmental borders, between staff, regardless of their status, and between disciplines. For more than three decades, the science system has been operating under “steady state” conditions (Ziman, 1994). Steady-state science has been accompanied by a decreasing lifespan for research projects, and this trend has given strength to the forces that eliminate unorthodox and original ideas. In several of our cases a certain kind of funding helped to reap the fruits of novel ideas: funding based on trust that scientists will do their work as well as they can. However, for many years, scientific research activity has been confronted with a high level of distrust, and this distrust is visible in the widespread use of performance indicators and by growth in measures such as evaluation, progress reports, management reports, audit certificates and the like. Permissive, trust-based funding does not appear to play the central role that it should play in the budgets of funding agencies. Therefore, policy makers should now be ready to accept that there is a clear need to provide appropriate funding for exploratory and high-risk research, even under the regime of steady-state science. When considering the institutional landscape that fosters creative research, it should be noted that a conspicuously favorable environment was found in a set of fundamental R&D labs in industry that, due to changes in market conditions and industry strategies, has been drastically reduced in size over the last decade. Many of the industrial labs mentioned by our interviewees no longer exist and some that do no longer allow the sort of work that resulted in the creative events that earned them the recognition reflected in our nomination process. This raises another sort of policy question that is not limited to lessons for R&D management and grant mechanisms aimed at stimulating individual choices by researchers. Rather, it points to the overall direction of the innovation system and whether this change in research arrangements will have an effect on its capacity to be as creative as it has been to date.