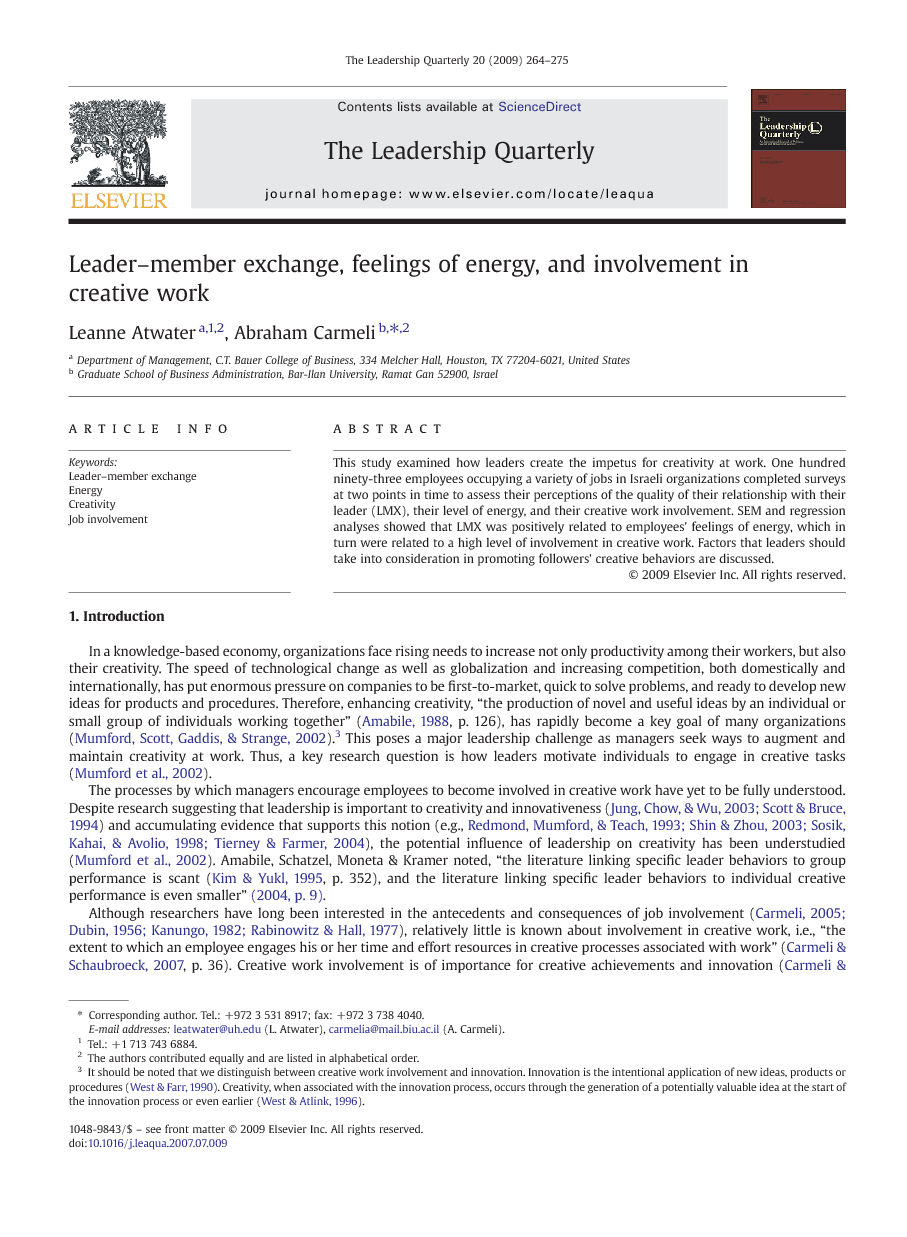 This study examined how leaders create the impetus for creativity at work. One hundred ninety-three employees occupying a variety of jobs in Israeli organizations completed surveys at two points in time to assess their perceptions of the quality of their relationship with their leader (LMX), their level of energy, and their creative work involvement. SEM and regression analyses showed that LMX was positively related to employees' feelings of energy, which in turn were related to a high level of involvement in creative work. Factors that leaders should take into consideration in promoting followers' creative behaviors are discussed.

In a knowledge-based economy, organizations face rising needs to increase not only productivity among their workers, but also their creativity. The speed of technological change as well as globalization and increasing competition, both domestically and internationally, has put enormous pressure on companies to be first-to-market, quick to solve problems, and ready to develop new ideas for products and procedures. Therefore, enhancing creativity, “the production of novel and useful ideas by an individual or small group of individuals working together” (Amabile, 1988, p. 126), has rapidly become a key goal of many organizations (Mumford, Scott, Gaddis, & Strange, 2002).3 This poses a major leadership challenge as managers seek ways to augment and maintain creativity at work. Thus, a key research question is how leaders motivate individuals to engage in creative tasks (Mumford et al., 2002). The processes by which managers encourage employees to become involved in creative work have yet to be fully understood. Despite research suggesting that leadership is important to creativity and innovativeness (Jung et al., 2003 and Scott and Bruce, 1994) and accumulating evidence that supports this notion (e.g., Redmond et al., 1993, Shin and Zhou, 2003, Sosik et al., 1998 and Tierney and Farmer, 2004), the potential influence of leadership on creativity has been understudied (Mumford et al., 2002). Amabile, Schatzel, Moneta & Kramer noted, “the literature linking specific leader behaviors to group performance is scant (Kim & Yukl, 1995, p. 352), and the literature linking specific leader behaviors to individual creative performance is even smaller” (2004, p. 9). Although researchers have long been interested in the antecedents and consequences of job involvement (Carmeli, 2005, Dubin, 1956, Kanungo, 1982 and Rabinowitz and Hall, 1977), relatively little is known about involvement in creative work, i.e., “the extent to which an employee engages his or her time and effort resources in creative processes associated with work” (Carmeli & Schaubroeck, 2007, p. 36). Creative work involvement is of importance for creative achievements and innovation (Carmeli and Schaubroeck, 2007, Keller, 1997 and Mumford et al., 2002). However, how and why individuals are motivated to become involved in creative work remains unclear and needs further research. As Carmeli & Schaubroeck noted: “although outcomes of the creative process are often studied, one of the key questions in creativity research relates to the motivation of individuals to become and remain creatively engaged at work” (2007, p. 36). This theoretical call to better understand why some employees are more involved in creative tasks than others is crucial because creative work requires high levels of mental energy, focus and persistence and it differs from more repetitive work in terms of the demands it places on workers and leaders. Workers in jobs that require a high level of creativity are often individuals whose creative ideas do not fit into a typical 9–5 workday. They need to feel highly energized and enthusiastic about their work. The creative work environment has been described as highly dynamic “full speed”, “go”, and “breakneck” as compared to slow, job-trot environments with few surprises (Ekvall, 1996). Thus, leaders need to find ways to induce a level of energy that will result in high involvement in creative work. Energy, the feeling that a person is capable of and eager to engage in a particular behavior or undertake a task (Dutton, 2003 and Quinn and Dutton, 2005), clearly contributes to one's involvement in creative work, but as Polewsky & Will (1996) point out, “it is not all that easy to free up creative energy; new ideas and innovative vigour don't just materialize of their own free will — they require a special background and specific conditions…” (p. 43).4 How do leaders energize their employees to be involved in creative work? Researchers have directed some attention to studying how leaders provide the impetus for creativity in the workplace (e.g., Redmond et al., 1993, Shin and Zhou, 2003, Tierney and Farmer, 2004 and Tierney et al., 1999). Amabile's (1983) Componential Theory of Creativity serves as the theoretical basis for the claim that supervisor's support “exerts an influence on subordinates' creativity through direct help with the project, the development of subordinate expertise, and the enhancement of subordinate intrinsic motivation” (Amabile et al., 2004, p. 6). These behaviors include serving as a role model, showing openness to new ideas, planning and setting goals appropriately, supporting the work group within the organization, shaping quality communication and interaction with work unit members, valuing individuals' contributions to the work task, showing confidence in them, and providing constructive feedback (Amabile et al., 2004). These specific, supportive leadership behaviors constitute both task-oriented and relationship-oriented actions (Amabile et al., 2004) that enhance one's willingness to become involved in creative work. Theory and research have noted that an influential way to energize the workplace and augment involvement in the job is through high-quality interpersonal relationships (Dutton, 2003). However, studies that have focused on the relationship between leader–member exchange (LMX) and creativity have reported mixed results (Elkins and Keller, 2003 and Tierney et al., 1999). In an attempt to address this call and further contributing to this line of thinking and research, we investigate the intervening role of employee feelings of energy in the relationship between employee perceptions of LMX and creative work involvement. The present study draws on three emerging theories. First, consistent with the Componential Theory of Creativity in the workplace (Amabile, 1983), we argue that relational leadership shapes positive social exchanges between the leader and the follower. This positive exchange not only helps develop expertise and enhance cognitive thinking and flexibility but also enhances the motivation of the follower to be involved in creative work (Amabile, 1997). In this study, we focus on the employee's motivation to engage in creative work. Second, we follow a relatively new stream of research that has begun to document the effect of affect on creativity at work ( Amabile et al., 2005, Fredrickson, 1998 and Fredrickson, 2001). Third, we build on emerging research on high-quality interpersonal relationships at work ( Dutton, 2003, Dutton and Heaphy, 2003 and Dutton and Ragins, 2007) which enriches the Componential Theory of Creativity (Amabile, 1983). Dutton (2003) argues that high-quality relationships lead to positive emotions such as joy and interest, which help increase individuals' capacity to think and act in the moment.

In an ever more turbulent environment where creativity becomes imperative for the future development of organizations and innovation (Amabile, 1988), leaders are confronted with a key challenge — how to motivate their employees to engage in creative work tasks. While we have begun to shift the focus from a negative perception of leaders who impede employee creativity (Mumford et al., 2002) to a more positive outlook on ways leaders can encourage followers to engage in creative work and display creativity, research has thus far been limited. Our study highlights the complex process in which leadership style is related to creative work involvement and suggests the possibility of a sequential relationship among leader–member exchange, feelings of energy, and creative work involvement.