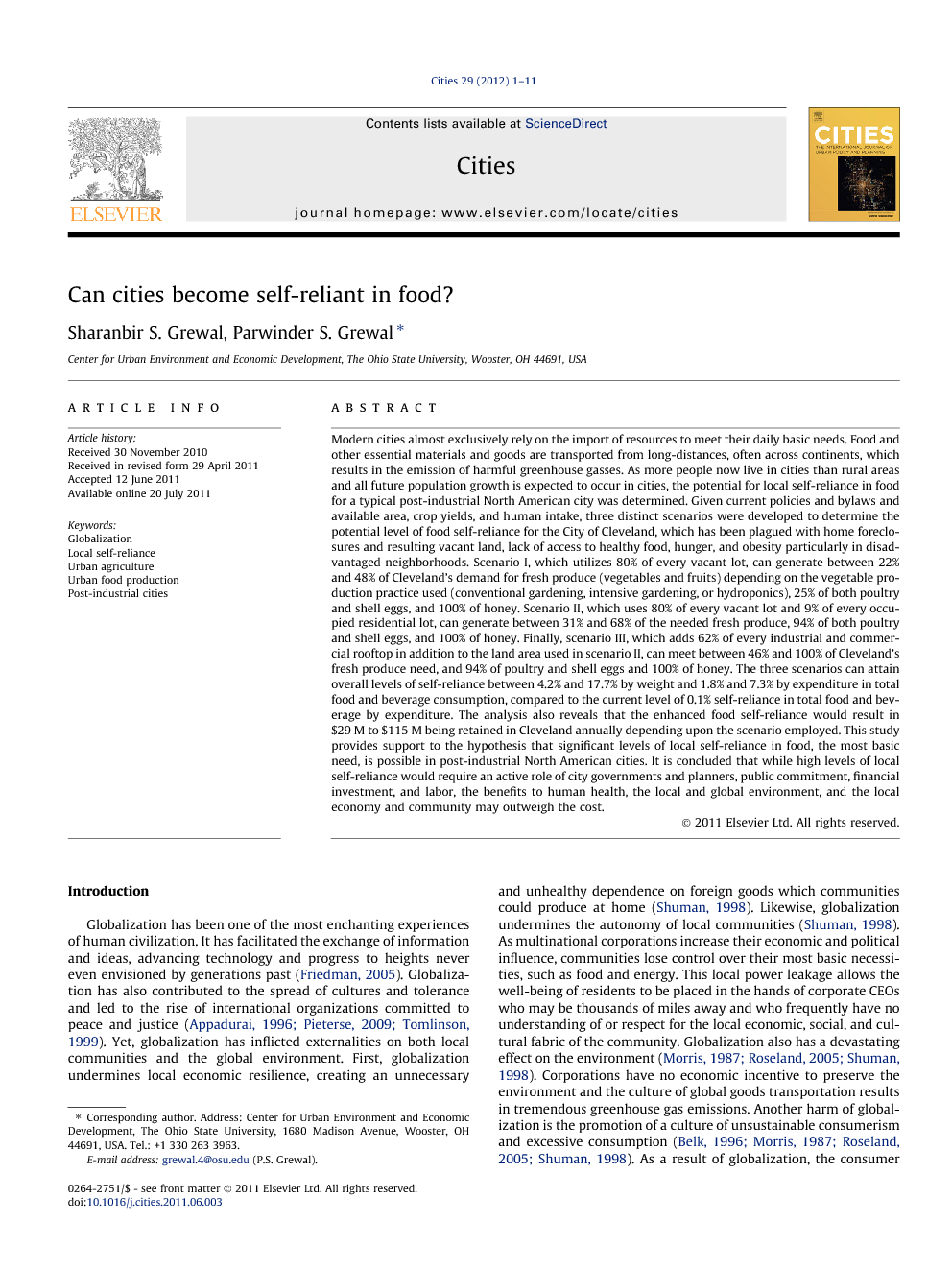 Modern cities almost exclusively rely on the import of resources to meet their daily basic needs. Food and other essential materials and goods are transported from long-distances, often across continents, which results in the emission of harmful greenhouse gasses. As more people now live in cities than rural areas and all future population growth is expected to occur in cities, the potential for local self-reliance in food for a typical post-industrial North American city was determined. Given current policies and bylaws and available area, crop yields, and human intake, three distinct scenarios were developed to determine the potential level of food self-reliance for the City of Cleveland, which has been plagued with home foreclosures and resulting vacant land, lack of access to healthy food, hunger, and obesity particularly in disadvantaged neighborhoods. Scenario I, which utilizes 80% of every vacant lot, can generate between 22% and 48% of Cleveland’s demand for fresh produce (vegetables and fruits) depending on the vegetable production practice used (conventional gardening, intensive gardening, or hydroponics), 25% of both poultry and shell eggs, and 100% of honey. Scenario II, which uses 80% of every vacant lot and 9% of every occupied residential lot, can generate between 31% and 68% of the needed fresh produce, 94% of both poultry and shell eggs, and 100% of honey. Finally, scenario III, which adds 62% of every industrial and commercial rooftop in addition to the land area used in scenario II, can meet between 46% and 100% of Cleveland’s fresh produce need, and 94% of poultry and shell eggs and 100% of honey. The three scenarios can attain overall levels of self-reliance between 4.2% and 17.7% by weight and 1.8% and 7.3% by expenditure in total food and beverage consumption, compared to the current level of 0.1% self-reliance in total food and beverage by expenditure. The analysis also reveals that the enhanced food self-reliance would result in $29 M to $115 M being retained in Cleveland annually depending upon the scenario employed. This study provides support to the hypothesis that significant levels of local self-reliance in food, the most basic need, is possible in post-industrial North American cities. It is concluded that while high levels of local self-reliance would require an active role of city governments and planners, public commitment, financial investment, and labor, the benefits to human health, the local and global environment, and the local economy and community may outweigh the cost.