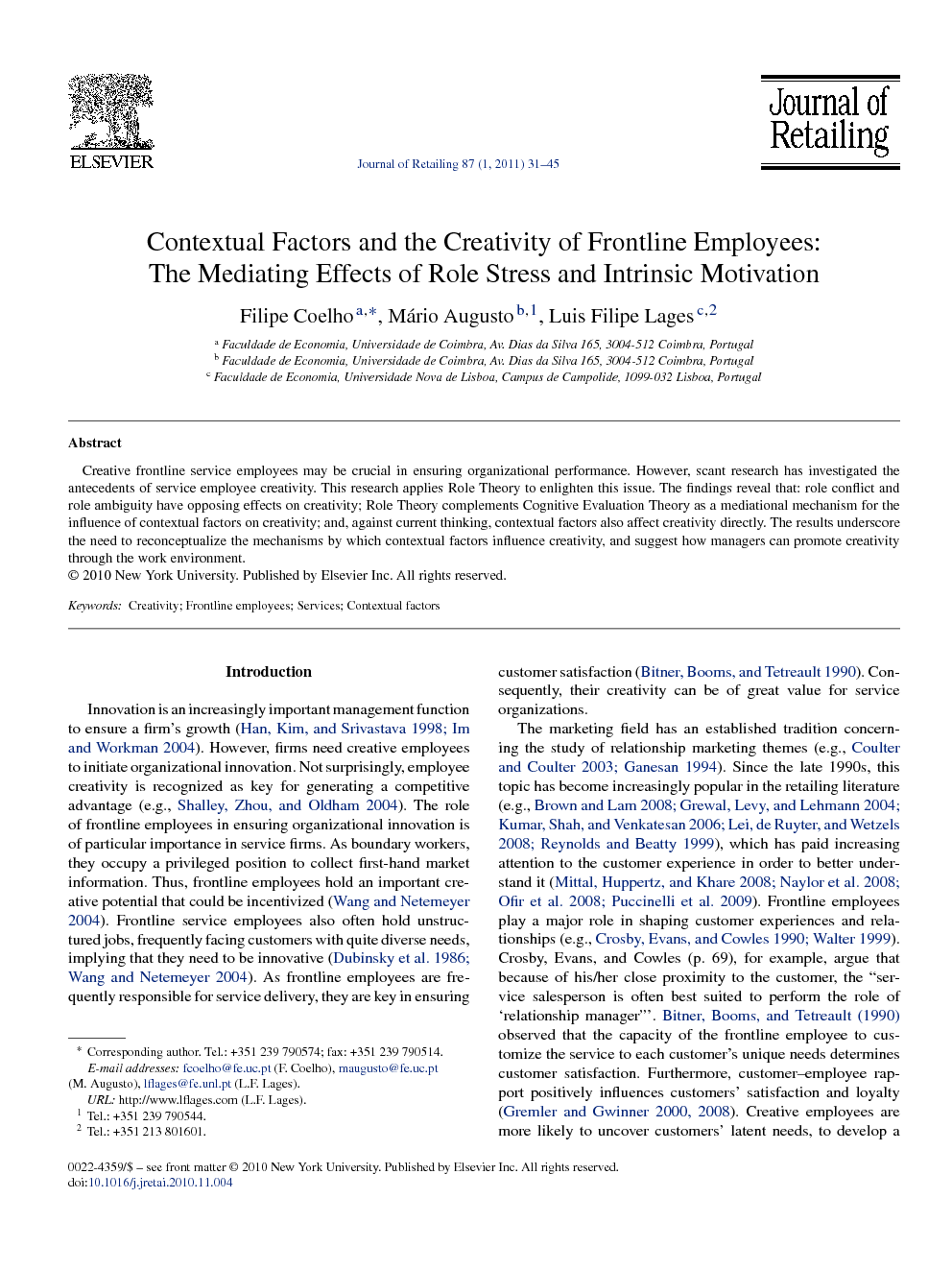 Creative frontline service employees may be crucial in ensuring organizational performance. However, scant research has investigated the antecedents of service employee creativity. This research applies Role Theory to enlighten this issue. The findings reveal that: role conflict and role ambiguity have opposing effects on creativity; Role Theory complements Cognitive Evaluation Theory as a mediational mechanism for the influence of contextual factors on creativity; and, against current thinking, contextual factors also affect creativity directly. The results underscore the need to reconceptualize the mechanisms by which contextual factors influence creativity, and suggest how managers can promote creativity through the work environment.

Innovation is an increasingly important management function to ensure a firm's growth (Han et al., 1998 and Im and Workman, 2004). However, firms need creative employees to initiate organizational innovation. Not surprisingly, employee creativity is recognized as key for generating a competitive advantage (e.g., Shalley, Zhou, and Oldham 2004). The role of frontline employees in ensuring organizational innovation is of particular importance in service firms. As boundary workers, they occupy a privileged position to collect first-hand market information. Thus, frontline employees hold an important creative potential that could be incentivized (Wang and Netemeyer 2004). Frontline service employees also often hold unstructured jobs, frequently facing customers with quite diverse needs, implying that they need to be innovative (Dubinsky et al., 1986 and Wang and Netemeyer, 2004). As frontline employees are frequently responsible for service delivery, they are key in ensuring customer satisfaction (Bitner, Booms, and Tetreault 1990). Consequently, their creativity can be of great value for service organizations. The marketing field has an established tradition concerning the study of relationship marketing themes (e.g., Coulter and Coulter, 2003 and Ganesan, 1994). Since the late 1990s, this topic has become increasingly popular in the retailing literature (e.g., Brown and Lam, 2008, Grewal et al., 2004a, Kumar et al., 2006, Lei et al., 2008 and Reynolds and Beatty, 1999), which has paid increasing attention to the customer experience in order to better understand it (Mittal et al., 2008, Naylor et al., 2008, Ofir et al., 2008 and Puccinelli et al., 2009). Frontline employees play a major role in shaping customer experiences and relationships (e.g., Crosby et al., 1990 and Walter, 1999). Crosby, Evans, and Cowles (p. 69), for example, argue that because of his/her close proximity to the customer, the “service salesperson is often best suited to perform the role of ‘relationship manager”’. Bitner, Booms, and Tetreault (1990) observed that the capacity of the frontline employee to customize the service to each customer's unique needs determines customer satisfaction. Furthermore, customer–employee rapport positively influences customers’ satisfaction and loyalty (Gremler and Gwinner, 2000 and Gremler and Gwinner, 2008). Creative employees are more likely to uncover customers’ latent needs, to develop a good rapport with customers, and to solve their service problems creatively and effectively, ultimately creating a superior experience (cf. Grewal et al., 2009 and Verhoef et al., 2009). Frontline employees’ creative initiatives should also enhance customer value, which has important behavioral consequences (e.g., Kleijnen, Ruyter, and Wetzels 2007). This suggests that the creativity of frontline service employees has a great potential to contribute to successful long-term relationships. In summary, creative frontline service employees are likely to have a substantial impact on producing superior customer experiences, customer satisfaction, quality relationships and, thus, on organizational performance. This implies that organizations may have much to benefit from understanding the key organizational as well as personal characteristics that are associated with employee creativity. With this knowledge, managers will be able to fine-tune recruitment, selection and training programmes, as well as to orchestrate the work environment in a way that promotes creative behaviors by frontline service employees. Despite the importance of creative behavior among frontline service employees, empirical research has yet to identify its determinants. This gap is significant because different tasks may require different skills, motivations, and cognitive strategies (Mumford 2003). Frontline employees play a boundary-spanning role, whose specificities have long been acknowledged to greatly affect employee job attitudes and behaviors (e.g., Babakus et al., 2009, Bettencourt and Brown, 2003 and Singh, 1998). They deal with many people inside and outside the organization (e.g., supervisors, co-workers, and customers), and each of these people behaves in ways that promote his or her personal needs and expectations. As a consequence of the social interactions with a large set of people, incompatibility of expectations often emerges, increasing employee role stress (Nonis, Sager, and Kumar 1996), the two key aspects of which are role conflict and role ambiguity (cf. Rhoads et al., 2002 and Tubre and Collins, 2000). This paper addresses three major gaps in the literature. Firstly, we design a conceptual model of the antecedents of creativity that focus on frontline service employees. Given the potential relevance of creativity in these settings, we thus help fill an important gap in the services marketing literature. Secondly, we present a broader perspective of what obstructs and facilitates frontline service worker creativity by investigating the influence of role stress, which is intrinsic in the frontline role (Nonis, Sager, and Kumar 1996). Thirdly, we propose Role Theory as a relevant perspective to explain the impact of contextual factors on creativity. Contextual factors refer to work environment dimensions that, as such, have potential to influence creativity (Shalley, Zhou, and Oldham 2004). Based on Cognitive Evaluation Theory, researchers have considered that contextual factors affect employee creativity via intrinsic motivation (Shalley, Zhou, and Oldham 2004). Shalley, Zhou, and Oldham (2004), upon a literature review, called for the consideration of new explanatory contextual factors as well as of new mediation mechanisms between context factors and creativity. Thus, our research addresses this plea by investigating the link between role stress and creativity, which has not been considered yet, and by proposing Role Theory as another mediation mechanism between the context and employee creativity.