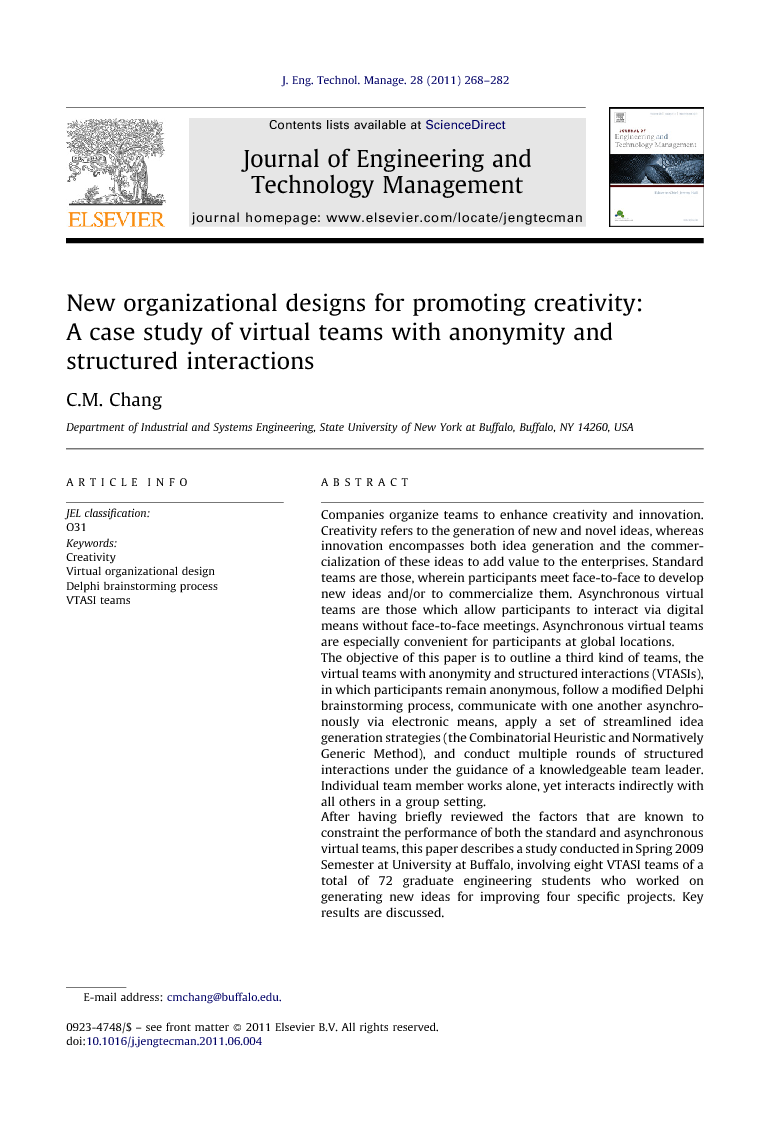 Companies organize teams to enhance creativity and innovation. Creativity refers to the generation of new and novel ideas, whereas innovation encompasses both idea generation and the commercialization of these ideas to add value to the enterprises. Standard teams are those, wherein participants meet face-to-face to develop new ideas and/or to commercialize them. Asynchronous virtual teams are those which allow participants to interact via digital means without face-to-face meetings. Asynchronous virtual teams are especially convenient for participants at global locations. The objective of this paper is to outline a third kind of teams, the virtual teams with anonymity and structured interactions (VTASIs), in which participants remain anonymous, follow a modified Delphi brainstorming process, communicate with one another asynchronously via electronic means, apply a set of streamlined idea generation strategies (the Combinatorial Heuristic and Normatively Generic Method), and conduct multiple rounds of structured interactions under the guidance of a knowledgeable team leader. Individual team member works alone, yet interacts indirectly with all others in a group setting. After having briefly reviewed the factors that are known to constraint the performance of both the standard and asynchronous virtual teams, this paper describes a study conducted in Spring 2009 Semester at University at Buffalo, involving eight VTASI teams of a total of 72 graduate engineering students who worked on generating new ideas for improving four specific projects. Key results are discussed. For global operations, the asynchronous virtual teams represent an improvement over the standard teams in terms of reach, costs, and execution. The VTASI teams advocated in this paper represent yet a further improvement over the Asynchronous virtual teams, and hold promise to be the most effective among the three types of teams in promoting creativity.

Teams are well-known organizational designs employed by many enterprises to pursue creativity and innovation, solve problems, optimize operations, and attend to other important business/engineering activities. Most of these teams are of the standard type, in which participants meet face-to-face to suggest, evaluate, plan and implement specific ideas and actions. It is known that the performance of such standard teams is negatively affected by factors such as production blocking, evaluation apprehensions and social loafing (Furnham, 2000). A second type of teams, the asynchronous virtual teams, goes one step further in promoting the electronic interactions between participants, without face-to-face meetings. As many enterprises pursue globalization at an ever increasing intensity, the asynchronous virtual teams gain more traction to become the preferred organizational form of conducting global business, wherein regional perspective and topical expertise are becoming increasingly important. However, the asynchronous virtual teams suffer from the negative impact of factors such as unstructured interactions, coordination difficulties if team size is large, and dominance of high-statue members (Ocker, 2005, Ocker, 2007a and Ocker, 2007b). This paper suggests a third type of teams, the “Virtual Teams with Anonymity and Structured Interactions” (VTASIs), which retain the benefits of the Asynchronous Virtual teams but without being negatively affected by some of the afore-mentioned factors. An experimental study was conducted in Spring 2009 semester at University at Buffalo, involving eight (8) VTASI teams of a total of 72 graduate engineering students, who worked on the generation of new ideas in four (4) specific projects. Described briefly below are the standard and asynchronous virtual teams. Presented thereafter are the new design features of the VTASI teams, its operational procedure, the specific idea generation strategies, which form a major part of the team design, the results of the team study, and general conclusions which are drawn from this study. For promoting creativity, the VTASI teams appear to be not affected by the negative factors indicated above and are thus superior to the asynchronous virtual teams particularly suitable for global companies.

Standard teams with collocated members are useful to generate creativity and pursue innovation, even though they have certain limits. Asynchronous virtual teams are better in that they are more readily applied to global settings, without any constraints related to geography and time zone. The “Virtual Teams with Anonymity and Structured Interactions” (VTASI) proposed in this paper represent a further improvement over the asynchronous virtual teams, in terms of minimized negative impact of a number of known factors that affect team performance. Eight idea generation VTASI teams were tested at SUNY at Buffalo. Results show that gender and national origin, social status, personality, and communications styles do not have any noticeable impact on the creative performance of the VTASI teams. Team outputs are shown to be affected by work experience and engineering disciplines of the participants. The number of novel ideas generated by the teams is shown to decrease and the quality of ideas is shown to increase from the initial to final rounds of team deliberations. Several factors appear to be responsible for these results: (1) roles played by the team leader who monitors, evaluates, encourages and guides the process, while maintaining a one-to-one relationship with each and every participant, thus eliminating social loafing and assuring individualized guidance, (2) anonymity of participants disallows status and dominance of some to affect the individual performance of others, (3) focus on idea generation by following a structured procedure of applying a set of well-defined thinking strategies, in order to challenge all members to reach a high innovative level, (4) unconstrained and equal opportunity for participants to express ideas, and (5) timely appraisal and recognition of outstanding performance. As speed and agility are significant competitive factors in today's global marketplace, the use of VTASIs is expected to become increasingly important to many global enterprises.