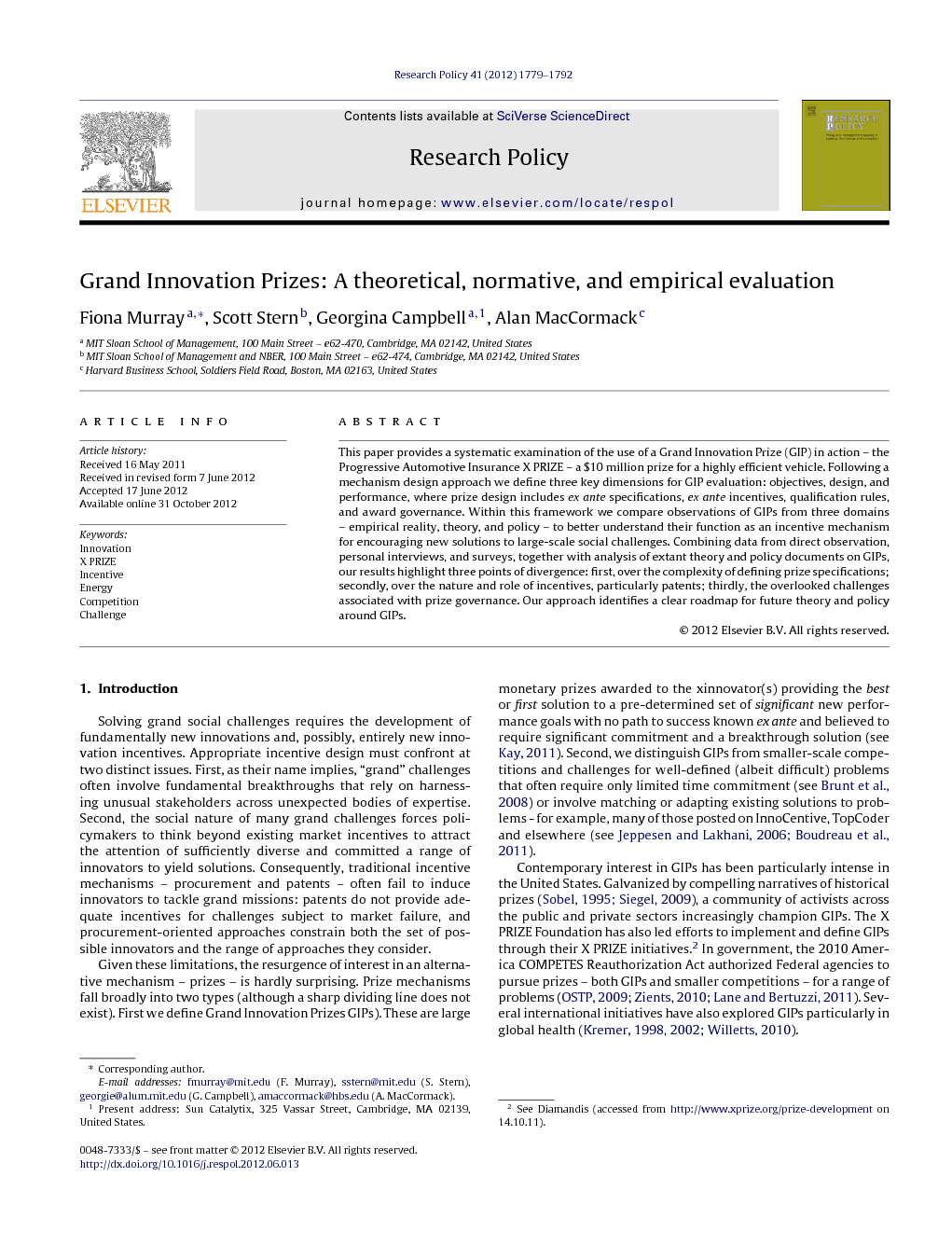 This paper provides a systematic examination of the use of a Grand Innovation Prize (GIP) in action – the Progressive Automotive Insurance X PRIZE – a $10 million prize for a highly efficient vehicle. Following a mechanism design approach we define three key dimensions for GIP evaluation: objectives, design, and performance, where prize design includes ex ante specifications, ex ante incentives, qualification rules, and award governance. Within this framework we compare observations of GIPs from three domains – empirical reality, theory, and policy – to better understand their function as an incentive mechanism for encouraging new solutions to large-scale social challenges. Combining data from direct observation, personal interviews, and surveys, together with analysis of extant theory and policy documents on GIPs, our results highlight three points of divergence: first, over the complexity of defining prize specifications; secondly, over the nature and role of incentives, particularly patents; thirdly, the overlooked challenges associated with prize governance. Our approach identifies a clear roadmap for future theory and policy around GIPs.

Solving grand social challenges requires the development of fundamentally new innovations and, possibly, entirely new innovation incentives. Appropriate incentive design must confront at two distinct issues. First, as their name implies, “grand” challenges often involve fundamental breakthroughs that rely on harnessing unusual stakeholders across unexpected bodies of expertise. Second, the social nature of many grand challenges forces policymakers to think beyond existing market incentives to attract the attention of sufficiently diverse and committed a range of innovators to yield solutions. Consequently, traditional incentive mechanisms – procurement and patents – often fail to induce innovators to tackle grand missions: patents do not provide adequate incentives for challenges subject to market failure, and procurement-oriented approaches constrain both the set of possible innovators and the range of approaches they consider. Given these limitations, the resurgence of interest in an alternative mechanism – prizes – is hardly surprising. Prize mechanisms fall broadly into two types (although a sharp dividing line does not exist). First we define Grand Innovation Prizes GIPs). These are large monetary prizes awarded to the xinnovator(s) providing the best or first solution to a pre-determined set of significant new performance goals with no path to success known ex ante and believed to require significant commitment and a breakthrough solution (see Kay, 2011). Second, we distinguish GIPs from smaller-scale competitions and challenges for well-defined (albeit difficult) problems that often require only limited time commitment (see Brunt et al., 2008) or involve matching or adapting existing solutions to problems - for example, many of those posted on InnoCentive, TopCoder and elsewhere (see Jeppesen and Lakhani, 2006 and Boudreau et al., 2011). Contemporary interest in GIPs has been particularly intense in the United States. Galvanized by compelling narratives of historical prizes (Sobel, 1995 and Siegel, 2009), a community of activists across the public and private sectors increasingly champion GIPs. The X PRIZE Foundation has also led efforts to implement and define GIPs through their X PRIZE initiatives.2 In government, the 2010 America COMPETES Reauthorization Act authorized Federal agencies to pursue prizes – both GIPs and smaller competitions – for a range of problems (OSTP, 2009, Zients, 2010 and Lane and Bertuzzi, 2011). Several international initiatives have also explored GIPs particularly in global health (Kremer, 1998, Kremer, 2002 and Willetts, 2010). Despite policy directives and private action to deploy this innovation mechanism, systematic analysis of GIPs remains limited (Williams, 2012). Relative to the extensive body of theoretical research considering the design of patents (e.g. Nordhaus, 1969, Merges and Nelson, 1990 and Scotchmer, 2004) or procurement contracts (e.g. Laffont and Tirole, 1992) little economic theory explicitly considers the properties of innovation prizes, or how prizes operate in comparison to other incentive mechanisms (see Wright, 1983, Shavell and van Ypersele, 2001 and Scotchmer, 2004). The most significant gap is the lack of empirical studies of contemporary GIPs (such as those offered by the X PRIZE Foundation). There exist reasonable accounts of historical cases (e.g. Sobel, 1995). However, the study by Brunt et al. (2008) of prizes and medals offered by the Royal Agricultural Society and Kay's recent detailed analysis of prizes for space innovation including the Northrop Grumman Lunar Lander Challenge (Kay, 2011) provide the only empirical analyses of GIPs to date. While these papers start to detail how GIPs work in practice, the lack of empirics remains worrisome as popular advocacy grows. To bridge this gap, this paper draws on an in-depth study of the $10 million Progressive Insurance Automotive X PRIZE (PIAXP). We leverage detailed information from the teams, organizers and judges involved in the prize to test theoretical and normative claims against the facts on the ground. To enrich our analysis, we explicitly compare theoretical arguments regarding GIPs, positions taken by GIP advocates, and the empirical reality of the PIAXP. To do so, we develop a simple framework that defines three dimensions over which to evaluate prizes: objectives, design, and performance. Rather than an exhaustive assessment of the entire GIP landscape, our evaluation offers a window into how the claims made by prize theorists and advocates compare with a Grand Innovation Prize in practice. We have five key findings: • GIPs are used to meet more complex and multi-faceted goals than anticipated in theoretical or policy analysis. Education, attention and community building can be as important as the technical solutions themselves. • While theorists design prizes with the object of producing efficient levels of effort towards a goal, advocates and practitioners aim to maximize effort. • The design of the ex ante technical specification for GIPS is complex and specifications that ensure “appropriate” solutions are hard to predict ex ante. • Ex ante incentives are more nuanced than recognized by theorists or prize advocates. Retained IP ownership is often a complement not a substitute to the award. • Prize governance is of critical importance: “thin” institutional arrangements leave prize organizers vulnerable to disputes over the structure or fairness of GIP awards. These findings have received little attention in the theoretical literature and are often assumed away by prize advocates. They suggest important divergences that have policy implications particularly as the government moves forward with prize implementation. Moreover, they suggest several paths for future empirical analysis. Our paper proceeds as follows. Section 2 provides a brief history of the use of GIPs in incentivizing solutions to mission-oriented problems. In Section 3, we outline our framework as a context within which to evaluate the objectives, design, and performance of prizes. Section 4 describes the methodology for our comparative theory, policy and empirical analysis, focusing on the empirical methods used in the study of the PIAXP. Section 5 structures our findings around the evaluative framework comparing theory, policy–advocacy and the empirical reality of PIAXP. A final section briefly concludes.

Recognizing the need to fill the gap between theory and practice in Grand Innovation Prizes with a richer understanding of the empirical facts on the ground as well as accounting for the divergence between prize theory, advocacy and the realities of running Grand Innovation Prizes, we analysed the Progressive Automotive Insurance X PRIZE. To do so effectively, we explicitly developed and used a framework that relies on three dimensions of prize analysis: objectives, design, and performance, to shape our analysis. This furthers the study of innovation prizes as real-world incentive mechanisms not simply theoretical or policy ideals. As we have shown, the empirical reality departs substantially from the ideal form of a prize, as described in the economic literature and advocated in policy-making documents. The contrast is particularly acute with respect to four areas. First, contrary to the dominant theoretical perspective, which assumes GIPs have a single, ultimate objective – to promote innovative effort – we find that GIPs blend a myriad of complex goals, including attention, education, awareness, credibility and demonstrating the viability of alternatives. Paradoxically, our results suggest that prizes can be successful even when they do not yield a “winner” by traditional standards. Conversely, prizes in which a winner is identified and a prize awarded may still fail to achieve some of their most important design objectives. Second, we find the types of problems that provide the target for GIPs are not easily specified in terms of a single, universal technical goal or metric. The reality is not nearly as clear or simple as either theorists or advocates have assumed. The complex nature of the mission (e.g., a highly energy efficient vehicle that is both safe to drive and can be manufactured economically), and the systemic nature of the innovations required to solve the stated problem, requires that multiple dimensions of performance be assessed. Some of these dimensions can neither be quantified nor anticipated, while others may change as the competition unfolds. Common metrics used today (e.g., miles per gallon) may be driven by current technical choices (i.e., gasoline engines), and translating them to work for new approaches (e.g., hydrogen fuel cells) may not be easily achieved. If done poorly, this will bias competitions in favour of certain technical choices and away from others. PIAXP demonstrates that contemporary GIPs are complex departures from smaller prizes examined by prior researchers, where the competitions involved individuals vying to solve relatively narrow problems (e.g., Lakhani et al., 2007). In those studies, the objective functions for solution providers are much more easily specified, as are the accompanying test procedures and mechanisms for governing and managing the process. Third, we find a clear divergence between theoretical treatments of the incentive effect of a prize purse and the reality of why participants compete. Critically, there are a variety of non-prize incentives that are just as (if not more) salient to participants, many of which can be realized regardless of whether a team “wins” or not. Some of these broader incentives – publicity, attention, credibility, access to funds and testing facilities – are financial in nature, but not captured by the size of the purse. Others – such as community building – are social in nature and are difficult to measure in terms of the utility they generate for participants. Prior work has tended to view situations where prize participants collectively “spend” substantially more than the prize purse (i.e., in terms of resources) as evidence that prizes are inefficient in terms of inducing the correct allocation of inventive effort. Our observations however, provide an alternative explanation for why this may not be the case. Participants might, in fact, be responding rationally to a broader range of incentives than has been assumed in prior work. Fourth, our work highlights the critical and underappreciated role of prize governance and management, a topic that is notably absent in the theoretical literature. We find that the mechanisms for governance and management must be designed explicitly to suit the particular prize being developed, a costly and time-consuming activity. Furthermore, given the difficulties in specifying ex ante all that can happen, rule modifications and adaptations along the way are to be expected, and these must be handled in a way that respects the rights and opinions of those participants who are already committed to the effort. In combination, our results suggest that GIPS cannot be viewed as a simple incentive mechanism through which governments and others stimulate innovation where markets have failed. Rather they are best viewed as a novel type of organization, where a complex array of incentives are considered and managed in order to assure that successful innovation occurs. Our study has been useful in illuminating the particular challenges of an emblematic GIP, the PIAXP. Although variations will exist in how GIPs are organized and implemented, the results we have been able to capture validate the overall framework of analysis that we have deployed in studying GIPs. The close examination of the objectives, design, and performance will be useful in evaluating the burgeoning array of Grand Innovation Prizes. We hope and expect that such analyses will both enrich theoretical discussions of the topic and offer guidance to advocates as they attempt to spur innovative solutions to problems that lie beyond traditional incentive mechanisms.