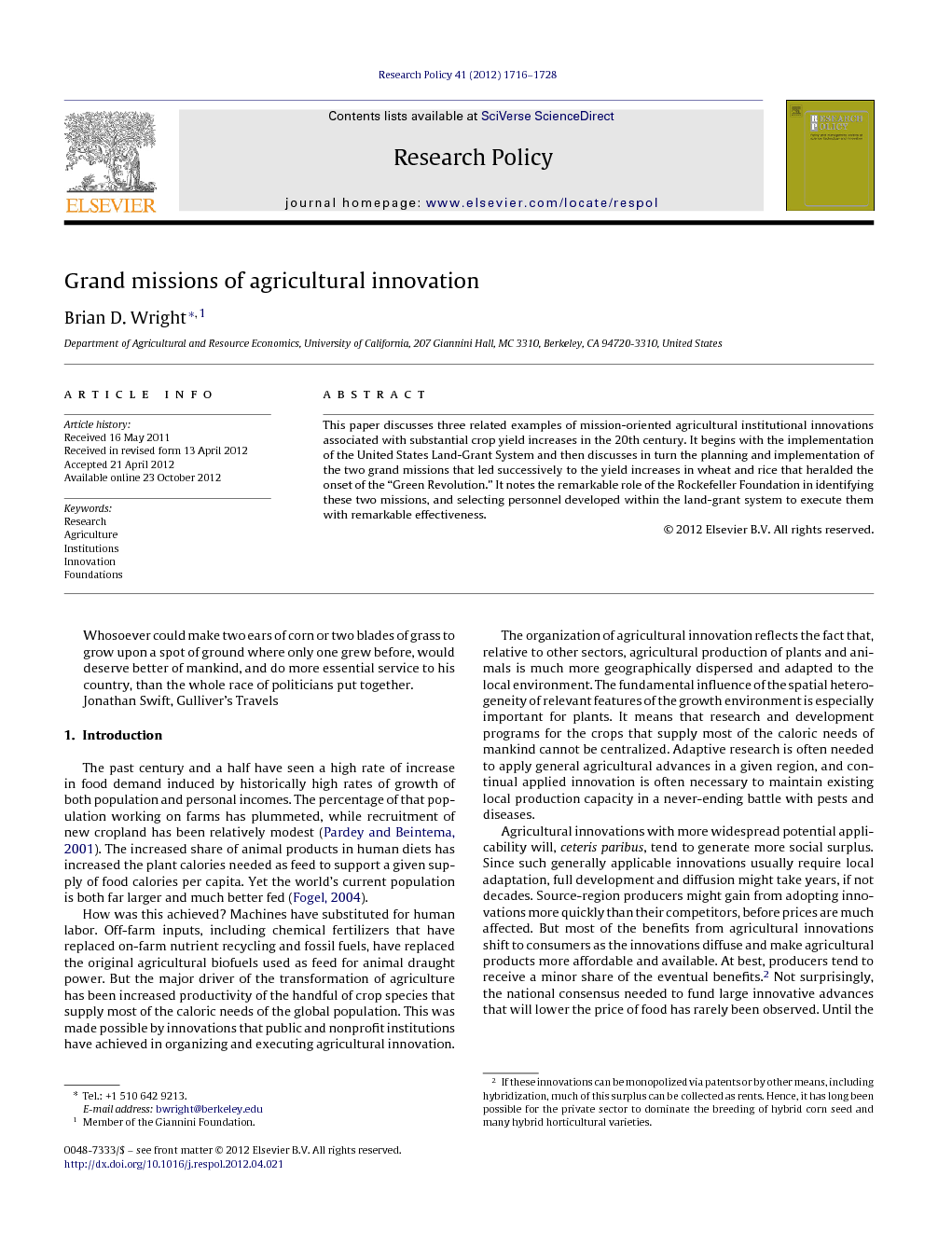 This paper discusses three related examples of mission-oriented agricultural institutional innovations associated with substantial crop yield increases in the 20th century. It begins with the implementation of the United States Land-Grant System and then discusses in turn the planning and implementation of the two grand missions that led successively to the yield increases in wheat and rice that heralded the onset of the “Green Revolution.” It notes the remarkable role of the Rockefeller Foundation in identifying these two missions, and selecting personnel developed within the land-grant system to execute them with remarkable effectiveness.

The past century and a half have seen a high rate of increase in food demand induced by historically high rates of growth of both population and personal incomes. The percentage of that population working on farms has plummeted, while recruitment of new cropland has been relatively modest (Pardey and Beintema, 2001). The increased share of animal products in human diets has increased the plant calories needed as feed to support a given supply of food calories per capita. Yet the world's current population is both far larger and much better fed (Fogel, 2004). How was this achieved? Machines have substituted for human labor. Off-farm inputs, including chemical fertilizers that have replaced on-farm nutrient recycling and fossil fuels, have replaced the original agricultural biofuels used as feed for animal draught power. But the major driver of the transformation of agriculture has been increased productivity of the handful of crop species that supply most of the caloric needs of the global population. This was made possible by innovations that public and nonprofit institutions have achieved in organizing and executing agricultural innovation. The organization of agricultural innovation reflects the fact that, relative to other sectors, agricultural production of plants and animals is much more geographically dispersed and adapted to the local environment. The fundamental influence of the spatial heterogeneity of relevant features of the growth environment is especially important for plants. It means that research and development programs for the crops that supply most of the caloric needs of mankind cannot be centralized. Adaptive research is often needed to apply general agricultural advances in a given region, and continual applied innovation is often necessary to maintain existing local production capacity in a never-ending battle with pests and diseases. Agricultural innovations with more widespread potential applicability will, ceteris paribus, tend to generate more social surplus. Since such generally applicable innovations usually require local adaptation, full development and diffusion might take years, if not decades. Source-region producers might gain from adopting innovations more quickly than their competitors, before prices are much affected. But most of the benefits from agricultural innovations shift to consumers as the innovations diffuse and make agricultural products more affordable and available. At best, producers tend to receive a minor share of the eventual benefits.2 Not surprisingly, the national consensus needed to fund large innovative advances that will lower the price of food has rarely been observed. Until the 19th century, the rate of yield increase was very slow, and hunger was commonplace worldwide. One area in which national innovative efforts that benefit agriculture have a long tradition is the introduction of new plants and animals from other countries. Since the dawn of recorded history, leaders have sent expeditions to acquire plant genetic material appropriate for given production environments or for meeting particular consumer needs. For example, in 1495 B.C., Queen Hatshepsut of Egypt sent an expedition to Ethiopia to collect frankincense or myrrh trees.3 At the onset of the industrial revolution, achievement of increased agricultural productivity, globally and nationally, was considered a noble goal, as the opening quote from Swift implies. Heightened recognition of the economic value of plants, and the need for their scientific documentation and classification, encouraged the spread of botanic gardens across Europe in the 18th and 19th centuries. In particular, Britain's Royal Botanic Gardens at Kew excelled in the acquisition, development, and dissemination of economically important plants (Juma, 1989). Experimentation with domestic plants by a London physician with boyhood experience of plant collecting in Jamaica led to his invention in 1829 of the Wardian Case, or terrarium, an enclosed glass container. This vastly increased the efficiency of international transportation of live plants between the new and old worlds (Schoenermarck, 1974). For example, use of the Wardian case reduced losses of plants shipped from China to England from 99.9% to 14%. Sir William Hooker of Kew Gardens imported six times as many plants in 15 years, using the case, as had been introduced to the Gardens in the previous century (Juma, 1989, p. 47). But significant increases in the growth of yields of major staple food crops did not occur until the 20th century. In this paper, I discuss three related examples of mission-oriented agricultural institutional innovations associated with substantial yield increases in the 20th century. Section 2 discusses the implementation of the United States Land-Grant System as an institutional innovation that was the culmination of a grand mission. Then, in Sections 3 and 4, I discuss the planning and implementation of the two grand missions that led successively to the yield increases in wheat and rice that heralded the onset of the “Green Revolution.” Human capital developed in the land-grant system at a time when it helped tilt the trends in United States crop yields sharply upwards and was crucial to the success of these later missions. They in turn provided the lead models that were followed by the larger group of centers that today constitute the Consultative Group on International Agricultural Research (CGIAR). In Section 5, I consider the relation in these grand missions between underlying motives, the choice of mission, and the technological solution. A brief conclusion follows.

The three cases considered here are prime examples of effective mission-oriented innovation. Each mission was embraced politically in a time of war or civil disturbance, when it seemed possible that entrenched interests could be challenged more successfully. Each mission helped facilitate later missions; in this sense, the sequence of innovations was state-dependent. Each mission also demonstrated the value of having champions for the cause, the importance of a clearly definable immediate objective, the need for a mix of fundamental and applied research activities, and the key role of accumulated specialized experience in mission formulation, funding, and execution. The development of the U.S. agricultural research system was the culmination of a grand mission. In addition to establishing a novel nationwide system of tertiary education accessible to the masses, it created and supported a long-sustained federal-state research structure. By compensating states for national spillovers from their mainly locally-focused research programs, and by offering producers enhanced local adaptive research capacity, the national research system ensured support for general advances that led to lower prices and great social benefits. The system itself did not determine the choice of technologies, but it did make it possible for scientists to acquire and exercise their professional skills in solving applied problems. Like many other successful grand missions, the establishment of the land-grant system required the efforts of dedicated and persistent champions and could be implemented only when a time of crisis offered a window of political opportunity during which opponents of disruptive innovation were at a disadvantage. Internationally, the inability to internalize international spillovers long discouraged national research efforts from supplying globally beneficial levels of innovation. In the development of semi-dwarf rice and wheat, the Ford and Rockefeller foundations played key roles in financing and executing sustained research programs that produced innovative crop-breeding approaches. When food-supply crises motivated politicians in hungry nations to embrace the mission to produce more food, the politicians were able to ensure the rapid adoption of new varieties by national producers and the development of better-adapted successors by their research institutions. The Rockefeller Foundation, in particular, appears to have developed a unique capacity to identify a mission and hire talented managers (who often had administrative experience in the land-grant system). These managers in turn established a remarkable record in selecting young, outstanding scientists who would determine the means of execution and devote the years necessary to complete the task. These scientists, educated and developed in the land-grant system at a time when it helped set yields of major United States crops on unprecedented upward trends, were able eventually to “work themselves out of their jobs,” confident that other opportunities would then become available within the organization. Whether the land-grant system, the foundations, and/or the CGIAR Centers can still meet grand challenges is an open question. The ability to separate the motives that determine a mission from the research program's choice of means of execution is crucial. It appears to be difficult to sustain this ability when research funding is determined jointly by more than a few parties, as is currently the case in the Centers of the CGIAR. When this ability to distinguish motives from means is lost, the choice set tends to narrow for political reasons, so that short-term projects with predictable results but fewer spillovers are favored. Indeed, except in dire emergencies, a tendency has arisen to impose the kinds of constraints that have chronically constrained national breeding programs. The directors of the centers are increasingly preoccupied with fund raising, and funders influence research execution and choice of technology as well as research direction. Herdt (2012) suggests that foundations have also changed. Laws now governing foundations in the United States have forced them to seek partners early in project development, thereby reducing their ability to operate independently, respond quickly to opportunities as they arise, and commit the time needed to complete programs successfully. Meanwhile, the land-grant system is facing unprecedented cuts in funding that threaten its core missions; indeed, governments are slashing budgets across the Western world. When the next food crisis descends upon us, and political leaders re-focus on the mission to supply sufficient food for their consumers, will they again be able to call on institutions that through foresight, persistent effort, and astute management are able to respond to the challenge and bridge the gap between national incentives and global needs?