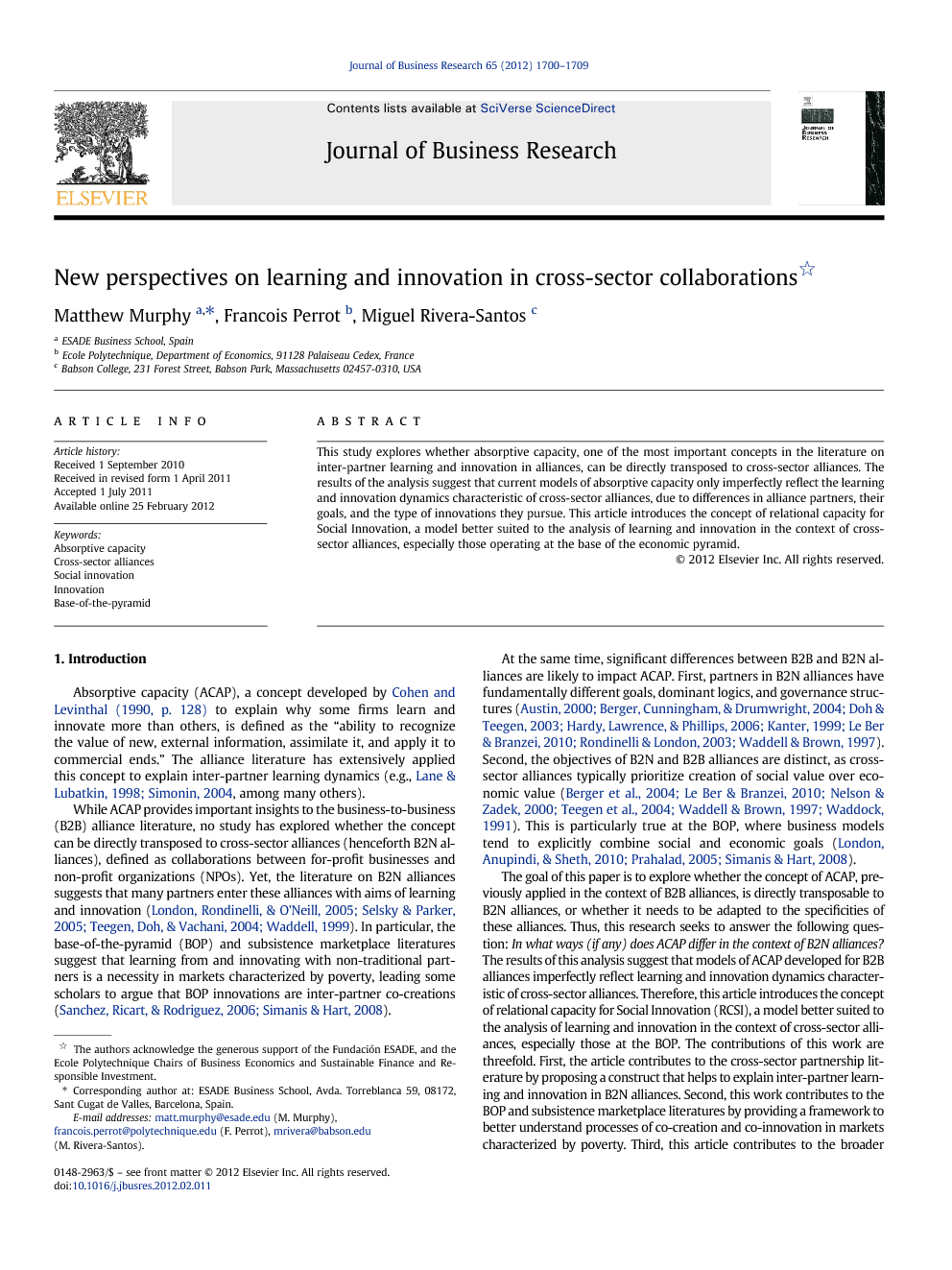 Absorptive capacity (ACAP), a concept developed by Cohen and Levinthal (1990, p. 128) to explain why some firms learn and innovate more than others, is defined as the “ability to recognize the value of new, external information, assimilate it, and apply it to commercial ends.” The alliance literature has extensively applied this concept to explain inter-partner learning dynamics (e.g., Lane and Lubatkin, 1998 and Simonin, 2004, among many others). While ACAP provides important insights to the business-to-business (B2B) alliance literature, no study has explored whether the concept can be directly transposed to cross-sector alliances (henceforth B2N alliances), defined as collaborations between for-profit businesses and non-profit organizations (NPOs). Yet, the literature on B2N alliances suggests that many partners enter these alliances with aims of learning and innovation (London et al., 2005, Selsky and Parker, 2005, Teegen et al., 2004 and Waddell, 1999). In particular, the base-of-the-pyramid (BOP) and subsistence marketplace literatures suggest that learning from and innovating with non-traditional partners is a necessity in markets characterized by poverty, leading some scholars to argue that BOP innovations are inter-partner co-creations (Sanchez et al., 2006 and Simanis and Hart, 2008). At the same time, significant differences between B2B and B2N alliances are likely to impact ACAP. First, partners in B2N alliances have fundamentally different goals, dominant logics, and governance structures (Austin, 2000, Berger et al., 2004, Doh and Teegen, 2003, Hardy et al., 2006, Kanter, 1999, Le Ber and Branzei, 2010, Rondinelli and London, 2003 and Waddell and Brown, 1997). Second, the objectives of B2N and B2B alliances are distinct, as cross-sector alliances typically prioritize creation of social value over economic value (Berger et al., 2004, Le Ber and Branzei, 2010, Nelson and Zadek, 2000, Teegen et al., 2004, Waddell and Brown, 1997 and Waddock, 1991). This is particularly true at the BOP, where business models tend to explicitly combine social and economic goals (London et al., 2010, Prahalad, 2005 and Simanis and Hart, 2008). The goal of this paper is to explore whether the concept of ACAP, previously applied in the context of B2B alliances, is directly transposable to B2N alliances, or whether it needs to be adapted to the specificities of these alliances. Thus, this research seeks to answer the following question: In what ways (if any) does ACAP differ in the context of B2N alliances? The results of this analysis suggest that models of ACAP developed for B2B alliances imperfectly reflect learning and innovation dynamics characteristic of cross-sector alliances. Therefore, this article introduces the concept of relational capacity for Social Innovation (RCSI), a model better suited to the analysis of learning and innovation in the context of cross-sector alliances, especially those at the BOP. The contributions of this work are threefold. First, the article contributes to the cross-sector partnership literature by proposing a construct that helps to explain inter-partner learning and innovation in B2N alliances. Second, this work contributes to the BOP and subsistence marketplace literatures by providing a framework to better understand processes of co-creation and co-innovation in markets characterized by poverty. Third, this article contributes to the broader inter-partner learning and innovation literatures by analyzing the impacts of the type of partners and overall goal of the alliance on learning and innovation. The sections that follow review the concept of ACAP before exploring differences between B2B and B2N alliances. The paper then develops propositions regarding how these differences impact various dimensions of ACAP in the context of B2N alliances and proposes an alternative model, relational capacity for Social Innovation (RCSI), better suited to this context. Two B2N alliances at the BOP provide illustrations of how the model can be used to analyze learning and innovation in cross-sector alliances at the BOP. The final section concludes by discussing implications and limitations of this research for scholars and practitioners.

This paper explores whether ACAP can be directly transposed to the context of B2N alliances. The analysis suggests that, due to differences in terms of partner types and their objectives, current models of ACAP do not fully explain learning and innovation in cross-sector alliances. As a result, this study introduces the concept of RCSI, better suited to the context of B2N alliances, especially at the BOP. While RCSI shares fundamental components with ACAP, it introduces several new elements and highlights the special importance of some existing components in the context of B2N alliances. In particular, RCSI emphasizes the importance of a firm's organizational identity to recognize social value and envision social innovations; of inter-partner relationships and social integration mechanisms to bridge gaps in basic knowledge and facilitate knowledge transfer; of co-creation and the transformation of partners' cognitive schemas; and of piloting solutions to complex problems prior to implementation. Finally, RCSI de-emphasizes the importance of regimes of appropriability, which are less relevant in the context of B2N alliances. The application of the RCSI model to the Danone–Grameen and Essilor–Aravind–SN alliances suggests that it helps better understand learning and innovation dynamics specific to B2N alliances. This study has limitations. In particular, while focusing on B2N alliances at the BOP, this study does not analyze cases in developed country contexts that might lead to further insights regarding the model of RCSI. Additionally, some scholars (e.g., Kerlin, 2006) have pointed to similarities between NPOs and social enterprises, arguing that alliances between firms and social enterprises are a form of B2N alliance. The study of RCSI in alliances between for-profit firms and social enterprises, also beyond the scope of this paper, is likely to provide important insights into how firms learn and innovate in non-traditional alliances. Finally, this is primarily a conceptual paper, relying on in-depth case study data to illustrate the proposed concept of RCSI. A quantitative study exploring the dimensions and impacts of RCSI in B2N alliances may be more generalizable, albeit most probably at the cost of a detailed understanding of the phenomenon. This study makes three main contributions to the literature, with implications for both researchers and practitioners. First, the RCSI construct contributes to the literature on cross-sector partnerships. While prior research has emphasized the specificity of B2N alliances (e.g., Berger et al., 2004, Rivera-Santos and Rufín, 2011 and Teegen et al., 2004) and the learning opportunities that exist within them (e.g., London et al., 2005, Selsky and Parker, 2005 and Waddell, 1999), the literature has not directly examined specific learning processes in B2N alliances. This study begins to fill this gap by highlighting the importance to social innovations of not only the processes set up in B2N alliances, but also of the partner-firm's organizational identity. These findings suggest a promising avenue of research in B2N alliances exploring the interaction between the characteristics of the partners, such as their identity and learning processes, as well as inter-partner relationship building processes. Second, this work contributes to BOP and subsistence marketplace literatures by providing a framework that facilitates understanding of processes of co-creation and co-innovation in markets characterized by poverty. While scholars have emphasized the importance of co-creation at the BOP (e.g., Sanchez et al., 2006 and Simanis and Hart, 2008), this study highlights the conceptual link between the degree to which knowledge and cognitive schema adaptation are needed, and social innovation, thus suggesting that different degrees of co-creation may occur at the BOP depending on the type of innovation pursued and the characteristics of the partners. Third, this study contributes to the broader inter-partner learning and innovation literatures. Through the RCSI construct, this work relaxes the implicit assumption prevalent in the literature that partners are firms and that the innovation pursued has commercial goals. The differences between ACAP and RCSI highlighted in this paper suggest that a more detailed analysis of the characteristics of partners and of the type of innovation pursued is called for in order to understand the implications for learning and innovation. Finally, this work can help practitioners set up B2N alliances more effectively, as it emphasizes the particular importance of two processes for the success of B2N alliances: the necessity to carefully build relationships to reduce gaps in basic knowledge between partners, and the need to purposefully design routines and processes to bring learning from cross-sector collaborations back into the focal organization. In conclusion, this work should encourage other scholars and practitioners to pursue the exploration of the specificity of the dynamics of inter-partner learning in the context of B2N alliances.