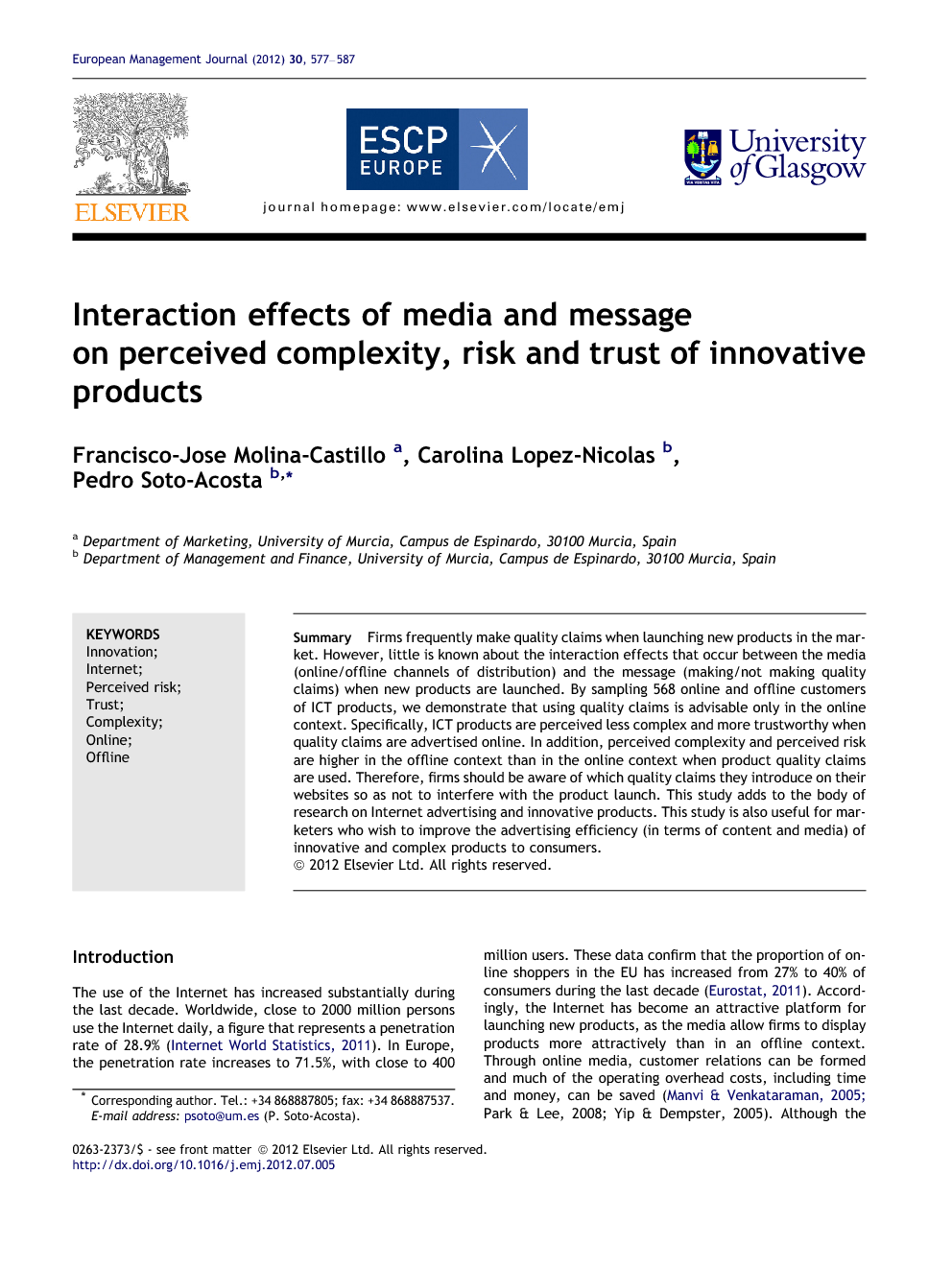 Firms frequently make quality claims when launching new products in the market. However, little is known about the interaction effects that occur between the media (online/offline channels of distribution) and the message (making/not making quality claims) when new products are launched. By sampling 568 online and offline customers of ICT products, we demonstrate that using quality claims is advisable only in the online context. Specifically, ICT products are perceived less complex and more trustworthy when quality claims are advertised online. In addition, perceived complexity and perceived risk are higher in the offline context than in the online context when product quality claims are used. Therefore, firms should be aware of which quality claims they introduce on their websites so as not to interfere with the product launch. This study adds to the body of research on Internet advertising and innovative products. This study is also useful for marketers who wish to improve the advertising efficiency (in terms of content and media) of innovative and complex products to consumers.

The use of the Internet has increased substantially during the last decade. Worldwide, close to 2000 million persons use the Internet daily, a figure that represents a penetration rate of 28.9% (Internet World Statistics, 2011). In Europe, the penetration rate increases to 71.5%, with close to 400 million users. These data confirm that the proportion of online shoppers in the EU has increased from 27% to 40% of consumers during the last decade (Eurostat, 2011). Accordingly, the Internet has become an attractive platform for launching new products, as the media allow firms to display products more attractively than in an offline context. Through online media, customer relations can be formed and much of the operating overhead costs, including time and money, can be saved (Manvi and Venkataraman, 2005, Park and Lee, 2008 and Yip and Dempster, 2005). Although the number of new products launched via the Internet is growing rapidly, researchers agree that there are still gaps in the literature concerning the best means by which to sell these innovations (Cases, 2002 and Gupta et al., 2004). Transacting through a virtual medium is different from traditional shopping environments (Alba et al., 1997 and Zott et al., 2000) in terms of the perceived risk (Mitchell, 2001 and Westland, 2002), the levels of trust (Scott, 2004), and the sense of freedom and control that exist in an online shopping context (Jarvenpaa & Todd, 1997). Several authors (Girard et al., 2002 and Ozer, 2004) argue that the Internet’s multimedia capabilities can magnify these differences. One of the first steps in launching a new product concerns communication-mix decisions (Ozer, 2004). In recent years, firms have begun to promote the quality of their products to help customers in their purchase decisions. Recent studies (e.g., Lee & Lee, 2006) have demonstrated that Internet advertising has become very popular for promoting the quality of new products. Making quality claims is a good strategy to avoid explaining in detail all of a new product’s quality characteristics in online and off-line contexts (Levin, Levin, & Weller, 2005). This practise is justified by the supposed difficulty of explaining all of the product’s benefits and capabilities (Kopalle & Lehmann, 2006). It also reduces the effects of information overload on consumers’ decisions (Chen, Shang, & Kao, 2009). Advertisements for new products frequently do not describe the product’s features but rather include words such as “quality”, “best quality”, etc., to influence customers’ decisions. The use of quality claims regarding a new product in the online media, in comparison to traditional product descriptions of quality features, may be substantial. These quality claims may impact consumer behaviour by reducing consumers’ search costs and complexity (Van der Heijden, Verhagen, & Creemers, 2003), by raising consumers’ expectations concerning the quality of the new product (Kopalle & Lehmann, 2006), by improving the quality of consumer decisions (Franke, Huhmann, & Mothersbaugh, 2004), or by decreasing risk perceptions (Pavlou, 2003). Although numerous theoretical models demonstrate that advertising may be used to signal product quality, there is little empirical evidence of such a link, and further research is required. The aim of our investigation is to explore the interaction effect of media (online vs. off-line) and content (quality claims vs. product characteristics) on the perceived complexity of innovative products. Theoretically, this study adds to the body of research concerning Internet advertising and innovative products. Managerially, this study is useful for marketers who wish to improve the advertising efficiency (in terms of content and media) of innovative and complex products to consumers. To achieve these objectives, two separate experiments were conducted using a new ICT product sold offline and online. ICT products were used in this study because they are frequently sold through both offline and online distribution channels and often include quality claims to attract customers. In the online environment, where trial and inspection before making a purchase decision are not possible but where search costs are lower than in the offline environment, it is expected that advertising a new product’s quality is beneficial. In addressing these issues, we hope to address the aforementioned gaps in the literature. In doing so, we may assist organisations in their innovative initiatives to promote the quality of new products. With this aim in mind, this study is organised as follows. First, the literature review and hypotheses are presented. Second, the research methods drawing from a sample of 568 consumers are described. Finally, conclusions and future research guidelines are presented.

Common method bias Given the use of self-reported ratings, potential common method bias was tested in three ways: (1) the Harman one-factor test, (2) a confirmatory factor-analytic approach to the Harman one-factor test, and (3) the single method factor approach (Podsakoff, Mackenzie, Lee, & Podsakoff, 2003). The rationale behind the first test is that if common method bias poses a serious threat to the analysis and interpretation of the data, a single latent factor would account for all manifest variables or one general factor for the majority of the covariance among the measures. In our case, the one-factor model obtained using principal components analysis revealed several factors in the unrotated factor solution. Recently, some researchers have used confirmatory factor analysis (CFA) as a more sophisticated test. A worse fit for the one-factor model would suggest that common method variance does not pose a serious threat. In our study, the one-factor model yielded χ295 = 2015.21 compared to χ258 = 105.13 for the measurement model. The fit is considerably worse, suggesting that common method bias is not a serious threat to the study’s findings. Despite its apparent appeal, this procedure presents several limitations. Therefore, additional statistical remedies are recommended. One of these approaches is the use of latent variable models (Podsakoff et al., 2003). This method involves adding a first-order factor with all of the measures as indicators to the researcher’s theoretical model. This approach yielded χ252 = 1065.82, which is considerably worse compared to χ258 = 105.13 of the measurement model, suggesting that common method bias is not a serious threat to the study’s findings (Podsakoff et al., 2003). We conclude that common method bias does not threaten the interpretation of our results. Measurement model The measures from the dataset were refined by assessing their unidimensionality and reliability. First, an initial exploration of unidimensionality was made using principal component factor analyses. In each analysis, eigenvalues were greater than one, lending preliminary support to a claim of unidimensionality in the constructs. Next, confirmatory factor analysis (CFA) using Lisrel 8.8 and alpha reliability analyses were performed to establish the required convergent validity, discriminant validity, and reliability. Because our research contains several multi items reflective scales, we investigated the psychometric properties of these measures through the composite reliability index (Bagozzi & Yi, 1988) and the average variance extracted index (Fornell & Larcker, 1981). The indices exceeded the recommended benchmarks of .60 and .50, respectively. Table 1 presents eigenvalues, the reliability measures and CFA results for the dataset. The fit indices for the overall model were as follows: chi-square value (df = 58) = 105.13; comparative fit index (CFI) = 0.99, non-normed fit index (NNFI) = 0.98; standardised root mean square error of approximation (RMSEA) = 0.04. These values collectively indicate that the measurement model has an acceptable fit. All item-construct loadings are high and significant (smallest t-value = 19.28), providing evidence of adequate convergent validity. Table options Furthermore, evidence of discriminant validity between the dimensions was provided by two different procedures recommended in the literature, as follows: (1) the 95% confidence interval constructed around the correlation estimate between two latent variables never includes value one (Anderson & Gerbing, 1988); and (2) the comparison of the square root of the AVE with the correlations among constructs reveals that the square root of the AVE for each component is greater than the correlation between components, in support of discriminant validity (Fornell & Larcker, 1981). Overall, the results obtained from these tests provided strong evidence of scales reliability and discriminant validity. To test whether the measurement model is invariant between the four scenarios, a multi-group analysis was performed in which the unconstrained and constrained models were estimated simultaneously across the groups. This procedure yielded a chi-square difference of 56.20 (df = 43) in the measurement weights, which was statistically non-significant (p = 0.08). The next constrained model in structural covariances produced a χ2 difference of 152.35 (df = 133), which was statistically significant (p = 0.05). However, it is widely accepted that the equality of covariances represents an overly restrictive test of the data (Byrne, 2001). We concluded that there was factorial invariance of the measuring instrument used in the four scenarios. Detailed results of the confirmatory factor analysis obtained for the overall model and for each of the four groups can be found in Table 2.