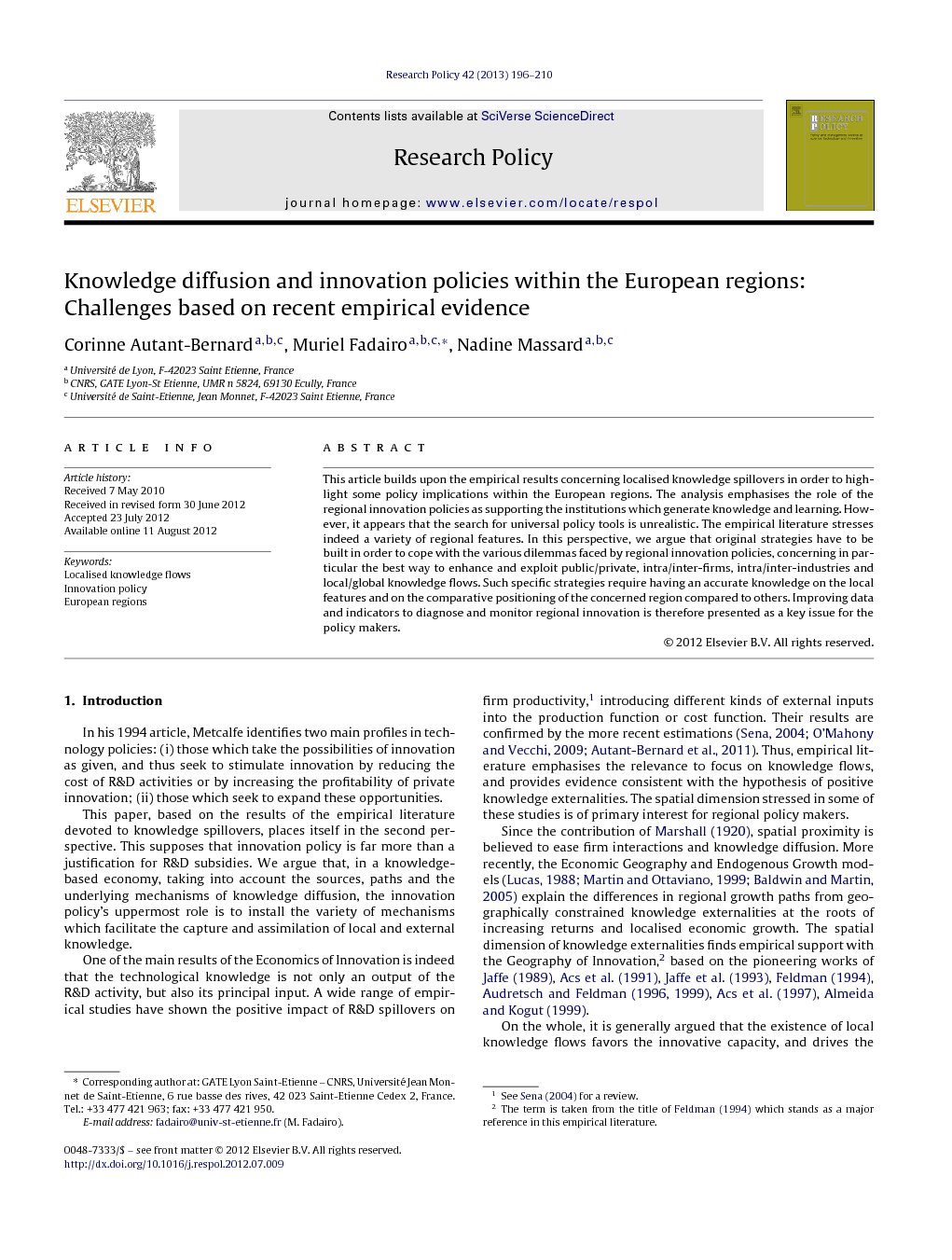 This article builds upon the empirical results concerning localised knowledge spillovers in order to highlight some policy implications within the European regions. The analysis emphasises the role of the regional innovation policies as supporting the institutions which generate knowledge and learning. However, it appears that the search for universal policy tools is unrealistic. The empirical literature stresses indeed a variety of regional features. In this perspective, we argue that original strategies have to be built in order to cope with the various dilemmas faced by regional innovation policies, concerning in particular the best way to enhance and exploit public/private, intra/inter-firms, intra/inter-industries and local/global knowledge flows. Such specific strategies require having an accurate knowledge on the local features and on the comparative positioning of the concerned region compared to others. Improving data and indicators to diagnose and monitor regional innovation is therefore presented as a key issue for the policy makers.

In his 1994 article, Metcalfe identifies two main profiles in technology policies: (i) those which take the possibilities of innovation as given, and thus seek to stimulate innovation by reducing the cost of R&D activities or by increasing the profitability of private innovation; (ii) those which seek to expand these opportunities. This paper, based on the results of the empirical literature devoted to knowledge spillovers, places itself in the second perspective. This supposes that innovation policy is far more than a justification for R&D subsidies. We argue that, in a knowledge-based economy, taking into account the sources, paths and the underlying mechanisms of knowledge diffusion, the innovation policy's uppermost role is to install the variety of mechanisms which facilitate the capture and assimilation of local and external knowledge. One of the main results of the Economics of Innovation is indeed that the technological knowledge is not only an output of the R&D activity, but also its principal input. A wide range of empirical studies have shown the positive impact of R&D spillovers on firm productivity,1 introducing different kinds of external inputs into the production function or cost function. Their results are confirmed by the more recent estimations (Sena, 2004, O’Mahony and Vecchi, 2009 and Autant-Bernard et al., 2011). Thus, empirical literature emphasises the relevance to focus on knowledge flows, and provides evidence consistent with the hypothesis of positive knowledge externalities. The spatial dimension stressed in some of these studies is of primary interest for regional policy makers. Since the contribution of Marshall (1920), spatial proximity is believed to ease firm interactions and knowledge diffusion. More recently, the Economic Geography and Endogenous Growth models (Lucas, 1988, Martin and Ottaviano, 1999 and Baldwin and Martin, 2005) explain the differences in regional growth paths from geographically constrained knowledge externalities at the roots of increasing returns and localised economic growth. The spatial dimension of knowledge externalities finds empirical support with the Geography of Innovation,2 based on the pioneering works of Jaffe (1989), Acs et al. (1991), Jaffe et al. (1993), Feldman (1994), Audretsch and Feldman, 1996 and Audretsch and Feldman, 1999, Acs et al. (1997), Almeida and Kogut (1999). On the whole, it is generally argued that the existence of local knowledge flows favors the innovative capacity, and drives the regional economic dynamics. At the same time however, public policies conceived to form a Silicon Valley type technology area have shown their limitation and are now widely considered as utopian (Maggioni, 2002 and Rallet and Torre, 2007). Thus, even though the theoretical and empirical literature confirms that regional innovation policies have a role to play (Tödtling and Trippl, 2005, Howells, 2005 and Laranjaa et al., 2008) and that they are at a key intervention level to support the institutions which generate knowledge and learning (Morgan, 2004), a main question remains: how to concretely impact on knowledge flows and on their geographic dimension? The answer is not obvious and is at the heart of this article. Our analysis builds upon the empirical results of the Geography of Innovation, concerning the localised knowledge flows, in order to highlight some policy implications within the European regions. This econometric literature is interesting for regional science and innovation policies. Indeed, the results of applied econometrics provide comparisons between various institutional contexts. Furthermore, the observation levels are generally government-defined areas,3 which is highly relevant for regional policy makers. Taking into account the main initial contributions on American and European data, this paper is more specifically based on the latest studies. Many of them take place as a result of the European programme devoted to Intangible Assets and Regional Economic Growth (IAREG). Recently, the measurement of the geographical dimension of knowledge externalities has been significantly improved, introducing some more complex processes of knowledge diffusion and using individual data along with new spatial econometric tools. This refines the modeling of externalities in knowledge production functions and enables to test for spatial auto-correlation (Acs et al., 2002, Fingleton and Lopez-Bazo, 2006 and Autant-Bernard et al., 2008). The geographic dimension of knowledge externalities – whether they flow from science to industry, remain intra-industrial or are intra-firm – is confirmed by the empirical literature. This result gives an important place to interventions at the regional level which is adequate to exploit the geographic externalities. However, latest studies show that proximity is not a sufficient condition for knowledge flows to occur. Many constraints other than those due to geographical distance can hinder the transmission of knowledge between the actors of innovation, so that specific actions have to be carried out to favour knowledge flows within regions. In addition, the empirical studies also clearly show that, even where they exist, the effects of proximity are never exclusive, and interact with effects far more remote nationally and internationally. This may give rise to other important stakes for the regional dynamics of innovation concerning the positioning of the region within the more global mechanisms of knowledge transfer and innovation networks. These new results of the literature on the geography of innovation are discussed in Section 2. In Section 3, arguments are provided justifying the implementation of regional public policies and giving them rationales. While the main difficulties to define and implement regional innovation policies are also stressed, different situations are identified, that may require public actions in order to favour innovation at the local level. Section 4 describes more precisely some of the relevant instruments which can be used in order to practically implement the previously designed policies and create the conditions for their effectiveness. Lastly, summary and concluding comments are provided in Section 5.

In the context of the European multi-territorial governance, the regional level of intervention appears to be decisive in favouring the establishment of a regional comparative advantage based on knowledge flows between local public and private institutions. Indeed, both theoretical and empirical studies point out the specific role of space in knowledge production and diffusion. The most recent empirical studies provide us with new insights on the underlying mechanisms. The role of formal and informal interpersonal relationships, and the role of mobile scientists as agents in knowledge spillovers, confirms that the local diffusion of knowledge is neither obvious nor systematic. The paper shows that regional public actions are much more needed to foster knowledge transmission than to control excessive diffusion of externalities which supposedly reduce the private incentive to innovate. The first situation identified refers to the debated questions concerning the conditions whereby the effects of proximity may act positively. Indeed public actions are often legitimate in order to bring together actors of innovation coming from different spheres: public or private, or from different industries. The second one concerns the difficult articulation between local and global flows of knowledge and assigns to regional public policies the objectives of preventing regional lock-in and removing the barriers to entering global networks. Indeed, considering the complexity of knowledge diffusion, which is only partly localised, regional innovation policies must also encourage the entry of local actors in international networks where pertinent knowledge is created and exchanged. Theoretical approaches to network structure, confirmed by empirical studies, stress the importance of both intense local connections and global ties. Pure networking policies, whether local or international, are not sufficient. Networks are more efficient when each node is sufficiently strong by itself and has a specific function within the process of knowledge production and diffusion. Because of this, building research potential and absorptive capacity is a key factor in firms’ integration within international research networks. Technological policies promoting private R&D do not only favour firms’ own R&D activities, but also firms’ ability to benefit from research network spillovers. Public incentives for R&D collaborations appear to be a complement, and not a substitute, to public support to private R&D. Finally, an important outcome of recent empirical studies is the great variety of regional contexts. There is, in particular, substantial diversity in spatial organisation, with some regions highly agglomerated and diversified and others relying on a lower level of agglomeration associated with a strong industrial specialisation. This result supports the idea that polarisation in very large cities is not the only model of spatial organisation likely to favour innovation production and diffusion. This explains why each region must create its own dynamics. The relevant objectives and means defined in this paper for innovation policies at the regional level are summarised in Table 1. A regional innovation observatory appears to be a key instrument for a good understanding of the local characteristics and for transnational policy learning. In addition, several interesting instruments are reported in Table 1, such as local platforms to foster pure knowledge spillovers, various local formal and informal links between science and industry to promote, like visits to laboratories. The aim is to facilitate the transformation of scientific results into local competitive performances. Local transverse cooperation programmes, seminars and financial support for local businesses to access the latest methods of knowledge management are ways to favour inter and intra firm knowledge flows in order to set up a regional comparative advantage. Local rewards depending on learning and creative efforts are part of the promotion of a regional learning economy favouring the territorial absorptive capacity and attractiveness.There is still a great deal of room for further research concerning the implementation at the regional level of incentive instruments for knowledge diffusion. This would require taking into account the variety of competencies and budgetary constraints associated with the regional political level within the European Union, in addition with a benchmarking of the existing practices. For now, we will conclude that this paper does not argue that uniform regional policies should be constructed. On the contrary, our results provide incentives for each region to be innovative in its policy design and to find the policy mix that best corresponds to its own strategic needs.