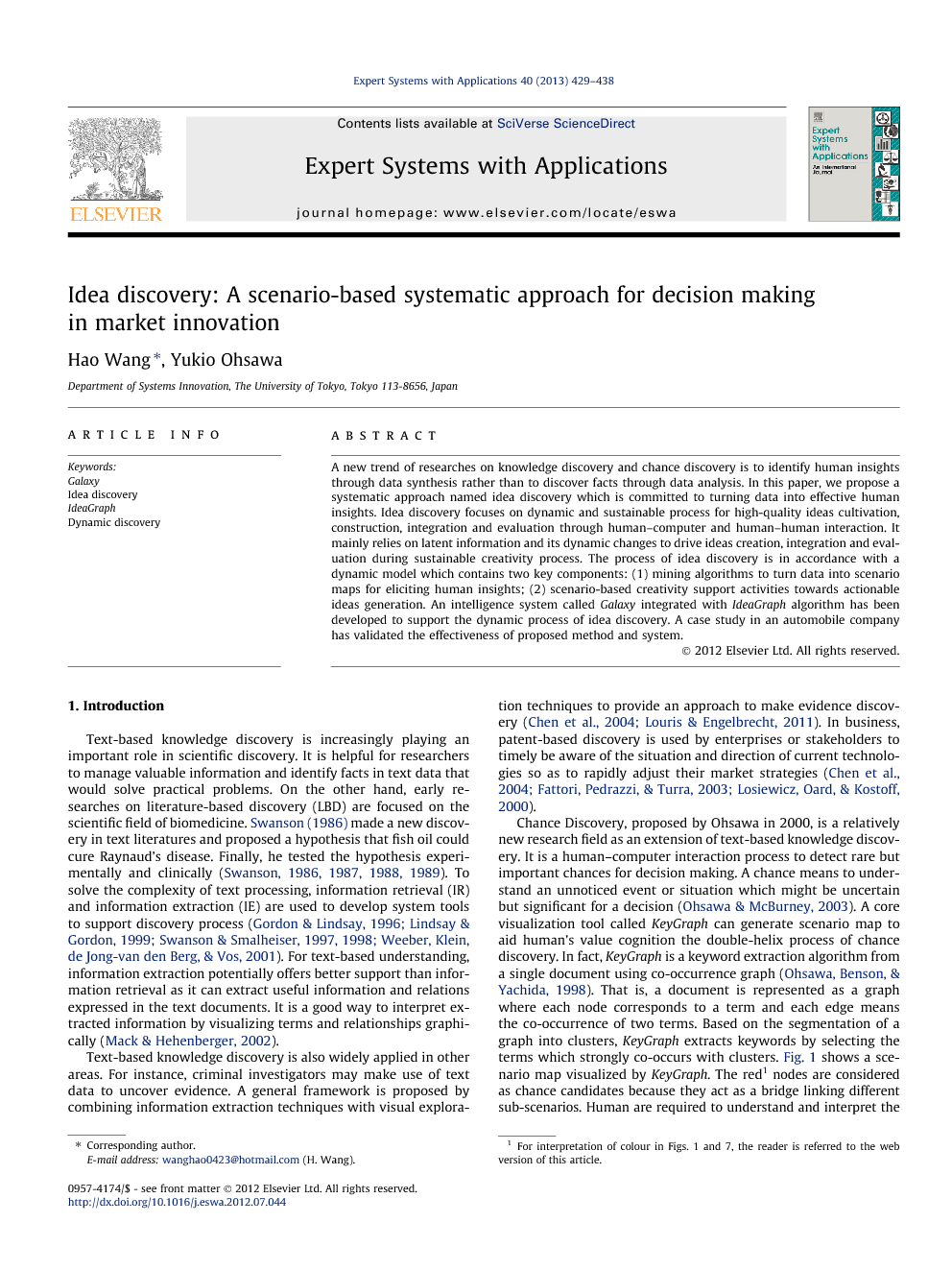 A new trend of researches on knowledge discovery and chance discovery is to identify human insights through data synthesis rather than to discover facts through data analysis. In this paper, we propose a systematic approach named idea discovery which is committed to turning data into effective human insights. Idea discovery focuses on dynamic and sustainable process for high-quality ideas cultivation, construction, integration and evaluation through human–computer and human–human interaction. It mainly relies on latent information and its dynamic changes to drive ideas creation, integration and evaluation during sustainable creativity process. The process of idea discovery is in accordance with a dynamic model which contains two key components: (1) mining algorithms to turn data into scenario maps for eliciting human insights; (2) scenario-based creativity support activities towards actionable ideas generation. An intelligence system called Galaxy integrated with IdeaGraph algorithm has been developed to support the dynamic process of idea discovery. A case study in an automobile company has validated the effectiveness of proposed method and system.

Text-based knowledge discovery is increasingly playing an important role in scientific discovery. It is helpful for researchers to manage valuable information and identify facts in text data that would solve practical problems. On the other hand, early researches on literature-based discovery (LBD) are focused on the scientific field of biomedicine. Swanson (1986) made a new discovery in text literatures and proposed a hypothesis that fish oil could cure Raynaud’s disease. Finally, he tested the hypothesis experimentally and clinically (Swanson, 1986, Swanson, 1987, Swanson, 1988 and Swanson, 1989). To solve the complexity of text processing, information retrieval (IR) and information extraction (IE) are used to develop system tools to support discovery process (Gordon and Lindsay, 1996, Lindsay and Gordon, 1999, Swanson and Smalheiser, 1997, Swanson and Smalheiser, 1998 and Weeber et al., 2001). For text-based understanding, information extraction potentially offers better support than information retrieval as it can extract useful information and relations expressed in the text documents. It is a good way to interpret extracted information by visualizing terms and relationships graphically (Mack & Hehenberger, 2002). Text-based knowledge discovery is also widely applied in other areas. For instance, criminal investigators may make use of text data to uncover evidence. A general framework is proposed by combining information extraction techniques with visual exploration techniques to provide an approach to make evidence discovery (Chen et al., 2004 and Louris and Engelbrecht, 2011). In business, patent-based discovery is used by enterprises or stakeholders to timely be aware of the situation and direction of current technologies so as to rapidly adjust their market strategies (Chen et al., 2004, Fattori et al., 2003 and Losiewicz et al., 2000). Chance Discovery, proposed by Ohsawa in 2000, is a relatively new research field as an extension of text-based knowledge discovery. It is a human–computer interaction process to detect rare but important chances for decision making. A chance means to understand an unnoticed event or situation which might be uncertain but significant for a decision (Ohsawa & McBurney, 2003). A core visualization tool called KeyGraph can generate scenario map to aid human’s value cognition the double-helix process of chance discovery. In fact, KeyGraph is a keyword extraction algorithm from a single document using co-occurrence graph (Ohsawa, Benson, & Yachida, 1998). That is, a document is represented as a graph where each node corresponds to a term and each edge means the co-occurrence of two terms. Based on the segmentation of a graph into clusters, KeyGraph extracts keywords by selecting the terms which strongly co-occurs with clusters. Fig. 1 shows a scenario map visualized by KeyGraph. The red1 nodes are considered as chance candidates because they act as a bridge linking different sub-scenarios. Human are required to understand and interpret the importance of chance candidates that can make the situation transfer from one sub-scenario to another. Later, Ohsawa (2005) proposed a breaking-through method named data crystallization where dummy nodes representing invisible events are inserted into the processed text data, and then new data is visualized by KeyGraph. However, the complex algorithm and graph obtained were hard for users to understand, thus Maeno and Ohsawa (2007) subsequently present a new method, human–computer interactive annealing, for revealing latent structures and discovering dark events. Based on chance discovery, Hong (2009) proposes an interactive human–computer process model called Qualitative Chance Discovery Model (QCDM) to extract more accurate data representation in scenario map for decision making on potential chances.In recent years, a scenario map generated by KeyGraph with data crystallization has been applied as the game board in Innovators Market Game ® (IMG) and Innovators Marketplace ® (IM) for innovative chance discovery ( Ohsawa, 2009, Ohsawa et al., 2010 and Ohsawa and Nishihara, 2012). In particular, human cognition of KeyGaph scenario map has been expanded from sensing bridge-like chances to creating chances through combining black nodes, see Fig. 2. Wang and Ohsawa, 2012a and Wang and Ohsawa, 2012b have proposed a systematic approach with IMG for ideas creation and evaluation, and have applied such an approach in product design. To improve IMG, a customer-centric creativity support techique, 4W-IMG, has been proposed (Wang & Ohsawa, 2011).Although many relevant researches have successfully achieved knowledge discovery and business chance discovery for decision making, a new trend in discovery researches is to identify true human insights through data synthesis rather than data analysis. In this research, we propose a novel systematic approach named idea discovery which extends static discovery into dynamic discovery in three dimensions. A hypothesis is proposed that latent information would be captured across different dimensions. Section 2 summarizes current discovery pattern and introduces the process of dynamic discovery. Idea discovery with a dynamic model is presented in Section 3. In Section 4, a mining algorithm called IdeaGraph as a key component of idea discovery is presented for discovering more latent information (event and their relations). A case study in automobile industry is described in Section 5 and the conclusion is in Section 6.

Traditional text-based discovery researches too much focus on exploring the facts through data analysis. However, a new trend is to identify true human insights through data synthesis rather than data analysis. In this paper, we examined a scenairo-based system approach called idea discovery for sustainable creativity support through human–computer and human–human interaction. Unlike traditional text-based discovery methods, idea discovery mainly depends on uncovering latent and important information (events and their relations) and its dynamic changes for high-quality ideas creation, integration and evaluation. We have developed an intelligence system called Galaxy to support idea discovery process. A case study in an auto company has verified the effectiveness of proposed method and system. We have helped the company achieve ten creative ideas, nine of which are accepted by the company for further development. Moreover, dynamic discovery makes the enterprise discover additional creative ideas regarded as potential business opportunities and timely develop their new strategies to respond ever-changing customer demands and market opportunities. This research contributes new knowledge in such fields as expert system, decision support system, chance discovery, knowledge discovery, data synthesis, etc.