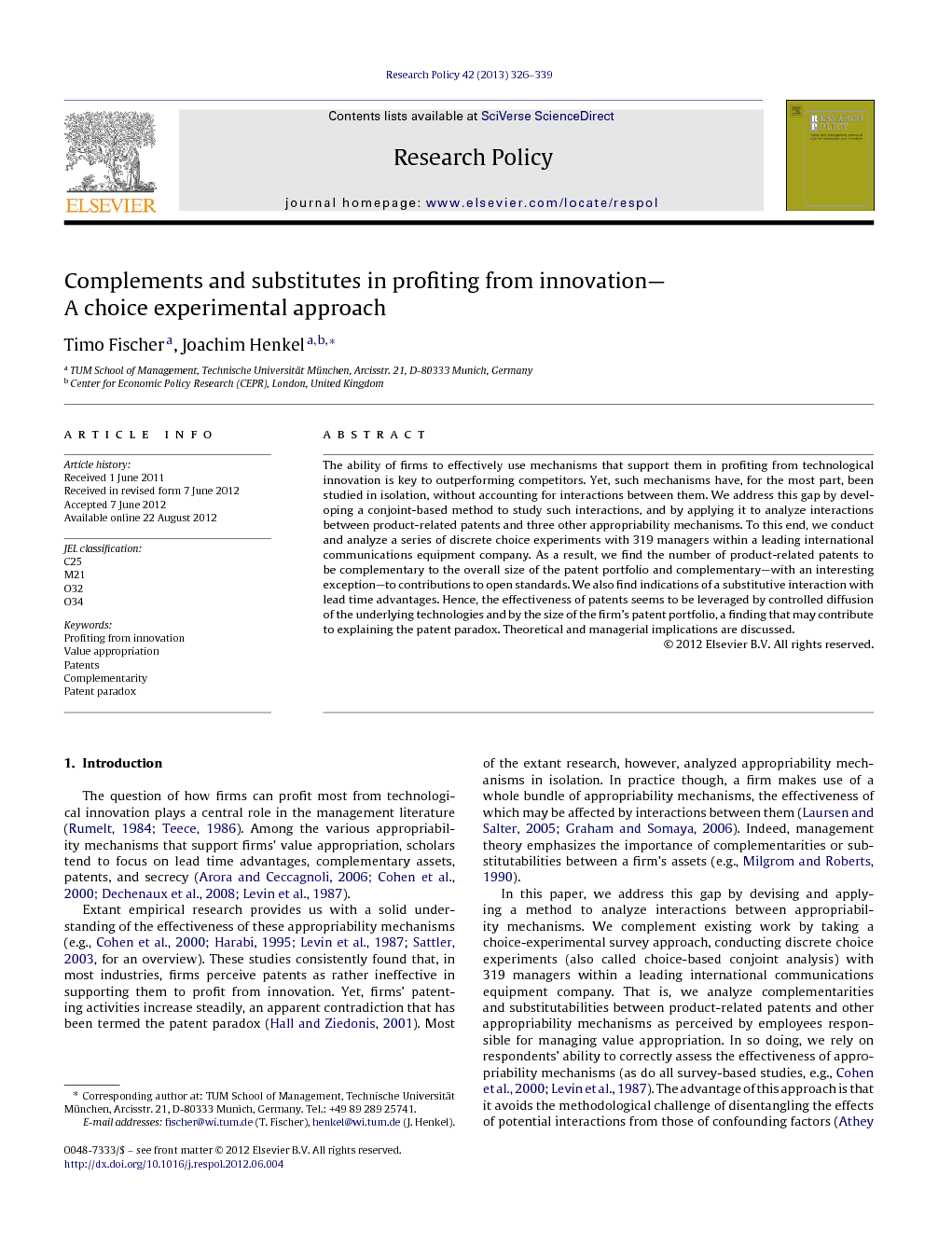 The ability of firms to effectively use mechanisms that support them in profiting from technological innovation is key to outperforming competitors. Yet, such mechanisms have, for the most part, been studied in isolation, without accounting for interactions between them. We address this gap by developing a conjoint-based method to study such interactions, and by applying it to analyze interactions between product-related patents and three other appropriability mechanisms. To this end, we conduct and analyze a series of discrete choice experiments with 319 managers within a leading international communications equipment company. As a result, we find the number of product-related patents to be complementary to the overall size of the patent portfolio and complementary—with an interesting exception—to contributions to open standards. We also find indications of a substitutive interaction with lead time advantages. Hence, the effectiveness of patents seems to be leveraged by controlled diffusion of the underlying technologies and by the size of the firm's patent portfolio, a finding that may contribute to explaining the patent paradox. Theoretical and managerial implications are discussed.

The question of how firms can profit most from technological innovation plays a central role in the management literature (Rumelt, 1984 and Teece, 1986). Among the various appropriability mechanisms that support firms’ value appropriation, scholars tend to focus on lead time advantages, complementary assets, patents, and secrecy (Arora and Ceccagnoli, 2006, Cohen et al., 2000, Dechenaux et al., 2008 and Levin et al., 1987). Extant empirical research provides us with a solid understanding of the effectiveness of these appropriability mechanisms (e.g., Cohen et al., 2000, Harabi, 1995, Levin et al., 1987 and Sattler, 2003, for an overview). These studies consistently found that, in most industries, firms perceive patents as rather ineffective in supporting them to profit from innovation. Yet, firms’ patenting activities increase steadily, an apparent contradiction that has been termed the patent paradox (Hall and Ziedonis, 2001). Most of the extant research, however, analyzed appropriability mechanisms in isolation. In practice though, a firm makes use of a whole bundle of appropriability mechanisms, the effectiveness of which may be affected by interactions between them (Laursen and Salter, 2005 and Graham and Somaya, 2006). Indeed, management theory emphasizes the importance of complementarities or substitutabilities between a firm's assets (e.g., Milgrom and Roberts, 1990). In this paper, we address this gap by devising and applying a method to analyze interactions between appropriability mechanisms. We complement existing work by taking a choice-experimental survey approach, conducting discrete choice experiments (also called choice-based conjoint analysis) with 319 managers within a leading international communications equipment company. That is, we analyze complementarities and substitutabilities between product-related patents and other appropriability mechanisms as perceived by employees responsible for managing value appropriation. In so doing, we rely on respondents’ ability to correctly assess the effectiveness of appropriability mechanisms (as do all survey-based studies, e.g., Cohen et al., 2000 and Levin et al., 1987). The advantage of this approach is that it avoids the methodological challenge of disentangling the effects of potential interactions from those of confounding factors (Athey and Stern, 1998), in particular, omitted variables.1 Furthermore, our research design offers participants a more realistic setting by prompting them to assess profiles of appropriability mechanisms rather than asking for the perceived effectiveness of each one separately. We study interactions between product-related patents and three other appropriability mechanisms: lead time, contributions to open (but not royalty-free) standards, and the firm's overall patent portfolio. We included “contributions to open standards” in this list since the deliberate diffusion of an innovation, and thus the waiving of exclusivity, has recently been identified as potentially facilitating profit from innovation (e.g., Harhoff et al., 2003, Henkel, 2006, Pisano, 2006 and Simcoe et al., 2009), Thus, we study profiting from innovation not only from selling products but also from outlicensing the underlying inventions in the context of standards (cf. Arora and Ceccagnoli, 2006). We furthermore distinguish between patents related to a given product and the firm's overall patent portfolio since the latter may have an independent effect on the product's protection. Given that this paper is not about formally testing a theory and derived hypotheses, we take an exploratory approach. Results show that survey participants do perceive various complementarities and substitutabilities between patents and other appropriability mechanisms. The number of product-related patents is, for firms with low and medium performance in appropriating value, perceived to be complementary to the size of the patent portfolio overall—but, interestingly, only for high levels of both mechanisms, not for intermediate levels. Furthermore, the number of product-related patents is seen as complementary to contributions to open standards (with an interesting exception: the combination of high levels of patenting with high levels of standard contributions is perceived as not beneficial). Also, there are indications of a substitutive interaction with lead time advantages, for firms with good appropriation capabilities. Our study makes three contributions. First, we contribute methodologically through the development of a method—based on contributions by King et al. (2000)—that tests for interaction effects in discrete choice experiments, which allows to study perceived complementarities and substitutabilites between appropriability mechanisms. Second, we contribute to the literature on profiting from innovation (originating with Teece, 1986) by explicitly addressing interactions between appropriability mechanisms. We find that patenting in conjunction with contributions to open standards (in which patents are licensed under “RAND” conditions—“reasonable and non-discriminatory”) is highly effective in capturing value, as conjectured earlier (Bekkers et al., 2002, Leiponen, 2008 and Simcoe et al., 2009). Furthermore, amassing large patent portfolios increases the effectiveness of product-related patents protection, and thus constitutes another way to leverage the effectiveness of patents. If respondents in earlier surveys, when rating the effectiveness of patents for protecting a given innovative product, related only to patents covering the focal product (rather than to the firm's overall patent portfolio), then this finding contributes to explaining the patent paradox. Third, we contribute to the strategy literature that discusses the importance of management competence in integrating and coordinating firms’ assets and capabilities (Holcomb et al., 2009, Sirmon et al., 2007 and Teece, 2007). We show that managers indeed perceive multiple interactions between mechanisms that have to be taken into account to optimize profiting from innovation.