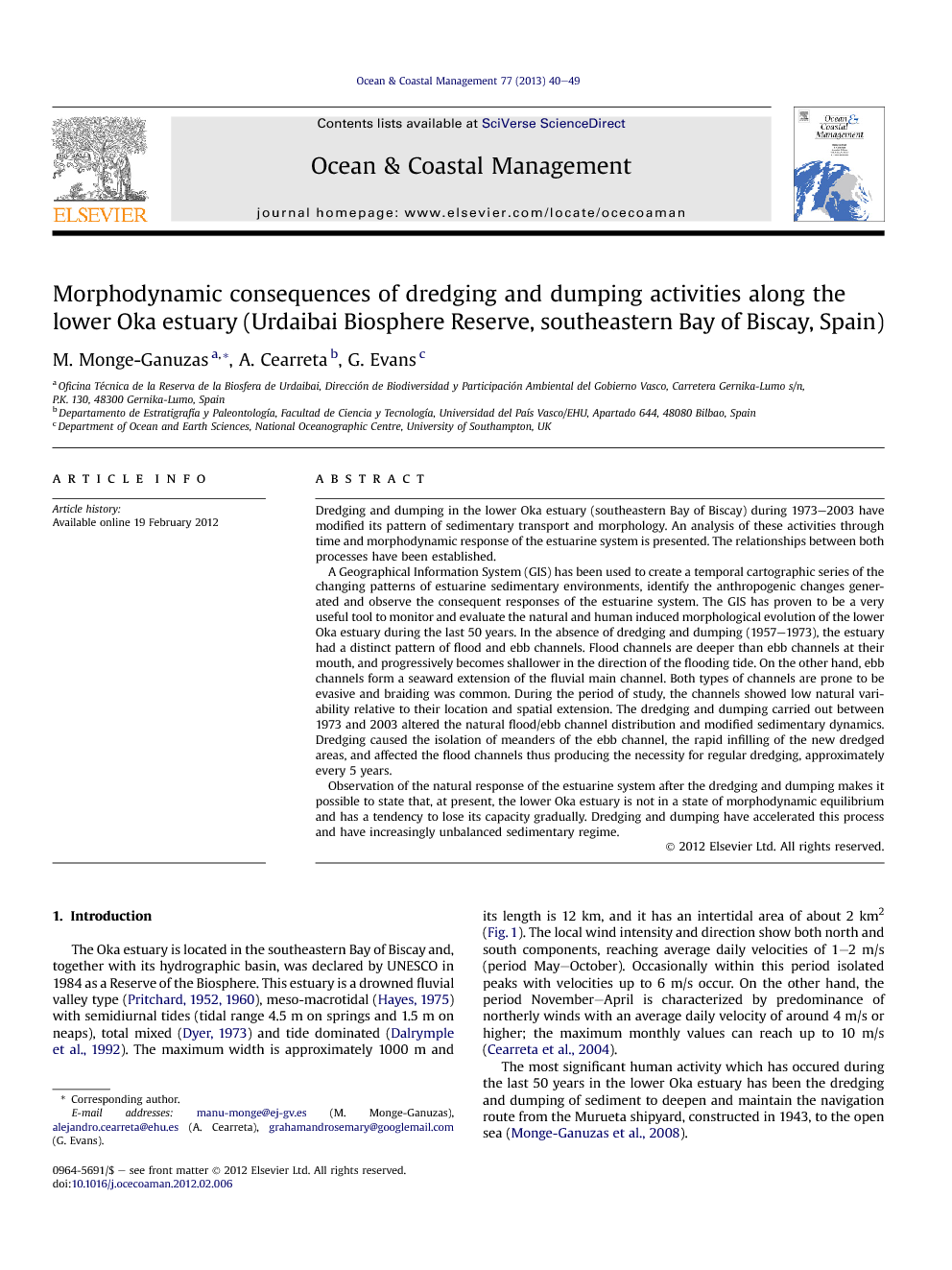 Dredging and dumping in the lower Oka estuary (southeastern Bay of Biscay) during 1973–2003 have modified its pattern of sedimentary transport and morphology. An analysis of these activities through time and morphodynamic response of the estuarine system is presented. The relationships between both processes have been established. A Geographical Information System (GIS) has been used to create a temporal cartographic series of the changing patterns of estuarine sedimentary environments, identify the anthropogenic changes generated and observe the consequent responses of the estuarine system. The GIS has proven to be a very useful tool to monitor and evaluate the natural and human induced morphological evolution of the lower Oka estuary during the last 50 years. In the absence of dredging and dumping (1957–1973), the estuary had a distinct pattern of flood and ebb channels. Flood channels are deeper than ebb channels at their mouth, and progressively becomes shallower in the direction of the flooding tide. On the other hand, ebb channels form a seaward extension of the fluvial main channel. Both types of channels are prone to be evasive and braiding was common. During the period of study, the channels showed low natural variability relative to their location and spatial extension. The dredging and dumping carried out between 1973 and 2003 altered the natural flood/ebb channel distribution and modified sedimentary dynamics. Dredging caused the isolation of meanders of the ebb channel, the rapid infilling of the new dredged areas, and affected the flood channels thus producing the necessity for regular dredging, approximately every 5 years. Observation of the natural response of the estuarine system after the dredging and dumping makes it possible to state that, at present, the lower Oka estuary is not in a state of morphodynamic equilibrium and has a tendency to lose its capacity gradually. Dredging and dumping have accelerated this process and have increasingly unbalanced sedimentary regime.

The Oka estuary is located in the southeastern Bay of Biscay and, together with its hydrographic basin, was declared by UNESCO in 1984 as a Reserve of the Biosphere. This estuary is a drowned fluvial valley type (Pritchard, 1952 and Pritchard, 1960), meso-macrotidal (Hayes, 1975) with semidiurnal tides (tidal range 4.5 m on springs and 1.5 m on neaps), total mixed (Dyer, 1973) and tide dominated (Dalrymple et al., 1992). The maximum width is approximately 1000 m and its length is 12 km, and it has an intertidal area of about 2 km2 (Fig. 1). The local wind intensity and direction show both north and south components, reaching average daily velocities of 1–2 m/s (period May–October). Occasionally within this period isolated peaks with velocities up to 6 m/s occur. On the other hand, the period November–April is characterized by predominance of northerly winds with an average daily velocity of around 4 m/s or higher; the maximum monthly values can reach up to 10 m/s (Cearreta et al., 2004).The most significant human activity which has occured during the last 50 years in the lower Oka estuary has been the dredging and dumping of sediment to deepen and maintain the navigation route from the Murueta shipyard, constructed in 1943, to the open sea (Monge-Ganuzas et al., 2008). The effects of dredging and dumping in the environment are variable and depend on the estuarine area and other factors such as: the magnitude and frequency of dredging, the dredging method, the form, length and depth of dredging, the grain size, the density and composition of dredged material, the intertidal area of dredging, the quality of water and sediment, the tidal range, the direction and intensity of tidal currents, the water mixing, the seasonal variability, the proximity to coastline and the presence of biological communities (IADC/CEDA, 1998). Prediction of potential adverse effects of dredging and dumping in estuaries cannot be evaluated properly if the previously mentioned parameters are unknown. Moreover, long- and short-term effects on dredged areas must be taken in account. As well, when dredging is undertaken periodically it is possible that this provokes accumulative effects. Lindeman (1997) stated that the most devastating environmental effects are not a product of particular activities but a combination of multiple single and individual effects throughout time. The aim of this study is to analyze the dredging and dumping which have occurred in the lower Oka estuary during the period 1957–2005, determine the consequent morphological changes in the estuary and finally to establish morphodynamic criteria for suitable management of the latter.

The use of GIS combined with oblique photographs and historical information has proven to be a useful tool for monitoring and evaluating the anthropogenic-morphodynamic evolution of the lower Oka estuary. The analysis carried out shows that the Laida beach area has varied throughout the study period. Between 1957 and 1995 its morphology was dependent on the balance between sediment availability, and wave, wind and tidal energy. Conditioned by these sedimentary transport processes, the ebb-tidal channel situated to the south of Laida (i.e inland of) adapted to its existing morphology. Consequently, it has presented a variable morphology depending on the extent and location of the Laida beach. The sand-dumping upon the beach (1995–2003 period) increased its supratidal area temporarily but at the same time this sediment became available for transportation and was re-worked by waves and tidal currents and re-introduced into the estuary. In the absence of dredging and dumping operations (1957–1973 period), the lower Oka estuary had a four ebb-flood tidal multi-channel system that showed little spatial variability. The consecutive dredging and dumping altered this natural channel distribution and modified the estuarine sedimentary dynamics. Dredged channels rapidly filled and provoked the necessity of new dredgings with an average periodicity of 5 years. Based on the consequences of dredging in other estuaries around the world and the process of capacity loss described by different authors, together with the response of the lower Oka estuary to the 2003 dredging it is possible to state that this estuary is currently unbalanced and shows a tendency to a gradual loss of capacity. Moreover, dredging and dumping operations have accelerated this loss of capacity, causing further imbalance in its estuarine dynamics. There is a human tendency to have a static vision of the coastal area. The case described shows that this does not conform to actual estuarine morphodynamics behavior. A lesson to be learned from this case study is that further deterioration of multi-channel systems, intertidal channels, intertidal flats, shoals and salt marshes should be avoided. This type of action requires a well-planned strategy of future dredging and dumping operations if the kind of effects described here are to be prevented.