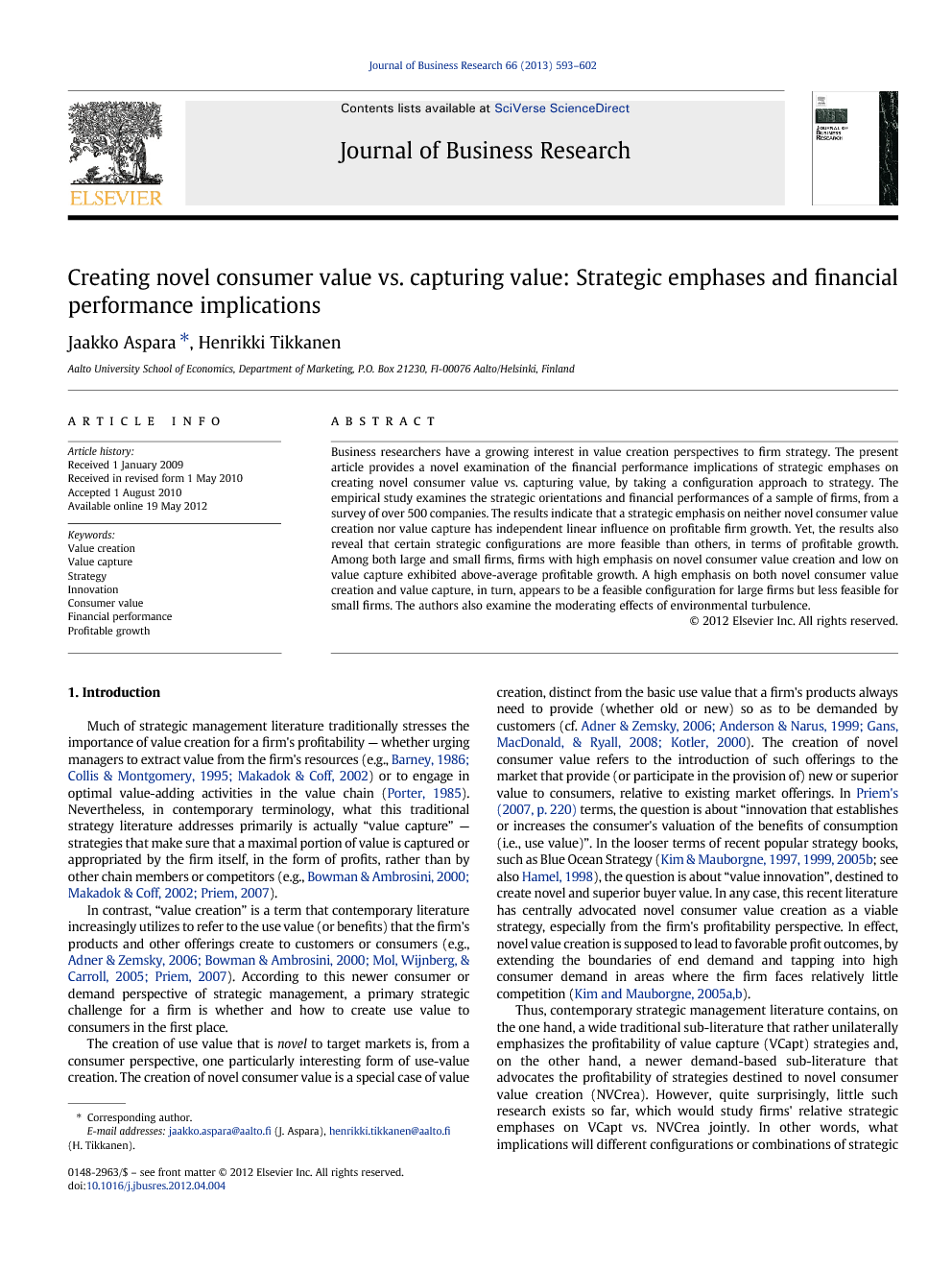 Much of strategic management literature traditionally stresses the importance of value creation for a firm's profitability — whether urging managers to extract value from the firm's resources (e.g., Barney, 1986, Collis and Montgomery, 1995 and Makadok and Coff, 2002) or to engage in optimal value-adding activities in the value chain (Porter, 1985). Nevertheless, in contemporary terminology, what this traditional strategy literature addresses primarily is actually “value capture” — strategies that make sure that a maximal portion of value is captured or appropriated by the firm itself, in the form of profits, rather than by other chain members or competitors (e.g., Bowman and Ambrosini, 2000, Makadok and Coff, 2002 and Priem, 2007). In contrast, “value creation” is a term that contemporary literature increasingly utilizes to refer to the use value (or benefits) that the firm's products and other offerings create to customers or consumers (e.g., Adner and Zemsky, 2006, Bowman and Ambrosini, 2000, Mol et al., 2005 and Priem, 2007). According to this newer consumer or demand perspective of strategic management, a primary strategic challenge for a firm is whether and how to create use value to consumers in the first place. The creation of use value that is novel to target markets is, from a consumer perspective, one particularly interesting form of use-value creation. The creation of novel consumer value is a special case of value creation, distinct from the basic use value that a firm's products always need to provide (whether old or new) so as to be demanded by customers (cf. Adner and Zemsky, 2006, Anderson and Narus, 1999, Gans et al., 2008 and Kotler, 2000). The creation of novel consumer value refers to the introduction of such offerings to the market that provide (or participate in the provision of) new or superior value to consumers, relative to existing market offerings. In Priem's (2007, p. 220) terms, the question is about “innovation that establishes or increases the consumer's valuation of the benefits of consumption (i.e., use value)”. In the looser terms of recent popular strategy books, such as Blue Ocean Strategy ( Kim and Mauborgne, 1997, Kim and Mauborgne, 1999 and Kim and Mauborgne, 2005b; see also Hamel, 1998), the question is about “value innovation”, destined to create novel and superior buyer value. In any case, this recent literature has centrally advocated novel consumer value creation as a viable strategy, especially from the firm's profitability perspective. In effect, novel value creation is supposed to lead to favorable profit outcomes, by extending the boundaries of end demand and tapping into high consumer demand in areas where the firm faces relatively little competition ( Kim and Mauborgne, 2005a and Kim and Mauborgne, 2005b). Thus, contemporary strategic management literature contains, on the one hand, a wide traditional sub-literature that rather unilaterally emphasizes the profitability of value capture (VCapt) strategies and, on the other hand, a newer demand-based sub-literature that advocates the profitability of strategies destined to novel consumer value creation (NVCrea). However, quite surprisingly, little such research exists so far, which would study firms' relative strategic emphases on VCapt vs. NVCrea jointly. In other words, what implications will different configurations or combinations of strategic emphases on NVCrea and VCapt have on a firm's financial performance? Indeed, while the extant research has mostly dealt with only one of the two factors – VCapt or NVCrea – at a time or dealt with the independent effects of the two factors, the purpose of this article is to examine the joint, configurational effects of VCapt and NVCrea on firms' financial performance. In practical terms, such an examination is highly relevant, since in the reality of any firm, managers need to choose the configuration of strategic emphases on both dimensions (e.g., would high emphasis on NVCrea but low emphasis on VCapt be better than high emphasis on both NVCrea and VCapt?) — not just consider the dimensions independently of each other.

Both strategic management (e.g., Bowman and Ambrosini, 2000, Gulati and Wang, 2003, Mol et al., 2005 and Priem, 2007) and marketing scholars (e.g., Berghman et al., 2006, Mizik and Jacobson, 2003, Schlegelmilch et al., 2003 and Simpson et al., 2006) have been reframing their perspectives to firm strategy in terms of value creation, especially from users' or consumers' perspective. However, while earlier research has tended to juxtapose novel value creation and value capture and/or deal with their independent effects, the literature has lacked examinations of configurations of these strategic dimensions. Thus, the present configurational examination of the strategic emphases yields several contributions. First of all, the present examination led to a conclusion that neither strategic emphasis on novel consumer value creation nor strategic emphasis on value capture has any robust independent (linear) effects on firm performance. With regard to the former, the fact that the study did not find a strategic emphasis on novel consumer value creation to have any universal linear effects is quite consistent with the innovation literature that has not reached any agreement on who benefits from (value) innovation or whether innovators or pioneers generally outperform second- or late-movers or imitators or vice versa (e.g., Jacobides et al., 2006, Lieberman and Montgomery, 1998, López and Roberts, 2002 and Teece, 1986). With regard to value capture, in contrast, the present results are more novel; value capture has not been explicitly studied as a dimension of strategic emphasis (that can vary in degree) before, even if traditional strategic management literature rather unilaterally advocates the importance of value capture. And most interestingly, in contrast to the traditional prescriptions, the present study found no positive effect on profitable growth by higher emphasis on value capture — in some models, the effect was even a negative one. This finding yields support to the argument that evolutionary scholars have sometimes made, proposing that attempts to isolate oneself too much from competition may actually lead to disadvantage for a firm, by preventing learning from competition (Barnett and Hansen, 1996 and Derfus et al., 2008).