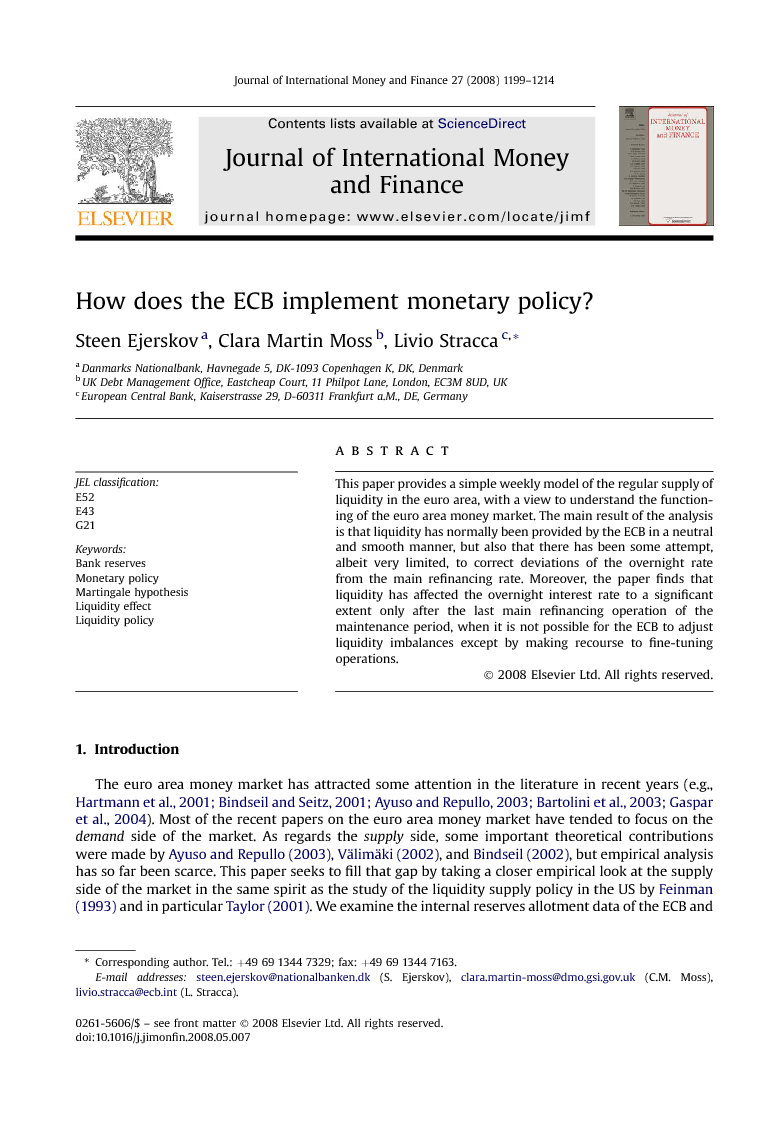 This paper provides a simple weekly model of the regular supply of liquidity in the euro area, with a view to understand the functioning of the euro area money market. The main result of the analysis is that liquidity has normally been provided by the ECB in a neutral and smooth manner, but also that there has been some attempt, albeit very limited, to correct deviations of the overnight rate from the main refinancing rate. Moreover, the paper finds that liquidity has affected the overnight interest rate to a significant extent only after the last main refinancing operation of the maintenance period, when it is not possible for the ECB to adjust liquidity imbalances except by making recourse to fine-tuning operations.

The euro area money market has attracted some attention in the literature in recent years (e.g., Hartmann et al., 2001, Bindseil and Seitz, 2001, Ayuso and Repullo, 2003, Bartolini et al., 2003 and Gaspar et al., 2004). Most of the recent papers on the euro area money market have tended to focus on the demand side of the market. As regards the supply side, some important theoretical contributions were made by Ayuso and Repullo, 2003 and Välimäki, 2002, and Bindseil (2002), but empirical analysis has so far been scarce. This paper seeks to fill that gap by taking a closer empirical look at the supply side of the market in the same spirit as the study of the liquidity supply policy in the US by Feinman (1993) and in particular Taylor (2001). We examine the internal reserves allotment data of the ECB and identify the factors underlying the supply decisions in the ECB's weekly open market operations. We also present a weekly demand model which may be thought of as the relevant constraint facing the central bank's weekly allotment decisions. The supply equation, a “liquidity reaction function” for the ECB, links the provision of liquidity to the spread between the overnight rate in the euro area and the main refinancing rate, henceforth the “EONIA spread”,1 or other very short-term interest rate indicators. The demand model in the paper relates the EONIA spread to the prevailing liquidity situation, defined as the average daily reserves surplus accumulated from the beginning of the one-month maintenance period. As our focus is on the supply equation, the demand model is relatively simple and stylized. The analysis in the paper, based on weekly data from April 1999 to November 2002, reveals two interesting features. First, we find that the ECB has generally provided liquidity in a neutral and smooth way during our sample period. This is appropriate and uncontroversial since, if there are no strong expectations of a change in the main refinancing rate within the maintenance period, there is no trade-off between liquidity and interest rate smoothing in the euro area. However, we also find some reaction, albeit limited, to the deviation of the EONIA and other short-term spot and forward interest rates from the main refinancing rate. In particular, if the overnight rate, or other very short-term rates, is above the main refinancing rate, primarily reflecting expectations of a change in the main refinancing rate during the same maintenance period, the liquidity allotment has sometimes been slightly loose, and vice versa. Nevertheless, also in light of the results of the demand side of the model, the reaction to interest rate change expectations prevailing in the maintenance period has been very small. This appears to be an important point of departure from the Fed approach to liquidity allotment policy, as described by Feinman (1993) and Taylor (2001). Second, as regards the demand side, we find that liquidity “imbalances” have affected the overnight rate only in the last week of the maintenance period, when the ECB cannot correct them other than by making recourse to a fine-tuning operation, a tool which was used very seldom in the sample period. Before the last main refinancing operation (henceforth MRO) of the maintenance period, liquidity imbalances affect the EONIA spread only to a very small extent, indicating that there is practically no “liquidity effect” in the euro area apart from the very last days of the period (see Hamilton, 1996; Thornton, 2001a, 2001b, for contrasting views in the US case). We interpret this result as indicating that the liquidity services provided by a marginal unit of reserves are close to zero with the relatively high reserve requirement in place in the euro area; intermediaries hold reserves practically only in order to satisfy the reserve requirement. The results also suggest that the reserve requirement and the averaging mechanism work effectively in the euro area to contain the volatility of the very short-term rates as a response to liquidity shocks. The paper is structured as follows. Section 2 presents the underpinnings of the weekly supply and demand model which is then estimated in Section 3. Section 4 provides some discussion on the results of the analysis. Section 5 concludes.

This paper has provided a simple weekly model of the supply and demand of liquidity in the euro area. From the supply side of the model, we find that the ECB's liquidity policy has been normally neutral. There appears to have been some reaction to deviations of the overnight rate from the main refinancing rate, but the reaction has been small on average. From a demand perspective and taking the supply of liquidity as given, we find that the liquidity situation appears to have mattered to a significant extent only in the last week of the maintenance period, and to have had a negligible effect earlier in the maintenance period. We find the results for the supply and demand sides of the market broadly consistent: the ECB may supply liquidity smoothly partly due to the insensitivity of the interest rate to the supply of reserves; the interest rate elasticity of the demand for liquidity may in turn be reduced by the market participants' expectation of a smooth and neutral provision of liquidity. Overall, based on this evidence liquidity smoothing can be characterized as the main objective of the ECB's liquidity policy during the first four years of EMU. This feature might represent an important point of departure from the Fed experience, whose explicit mandate is that of keeping the federal funds rate close to the FOMC target. There is no such explicit mandate in the euro area and the EONIA is not a “policy rate”. Our analysis is mainly descriptive and does not assess the welfare consequences of the liquidity policy which we observe. However, the analysis provides a simple framework for addressing such issues and the derivation of a liquidity policy rule which is optimal from a welfare perspective is the natural extension of this analysis. This extension might be aimed at dealing with fundamental issues such as the relative weight of interest rate and liquidity smoothing in the liquidity management's ideal loss function, which have been touched upon only casually in the literature and yet represent an interesting topic for research in this field.