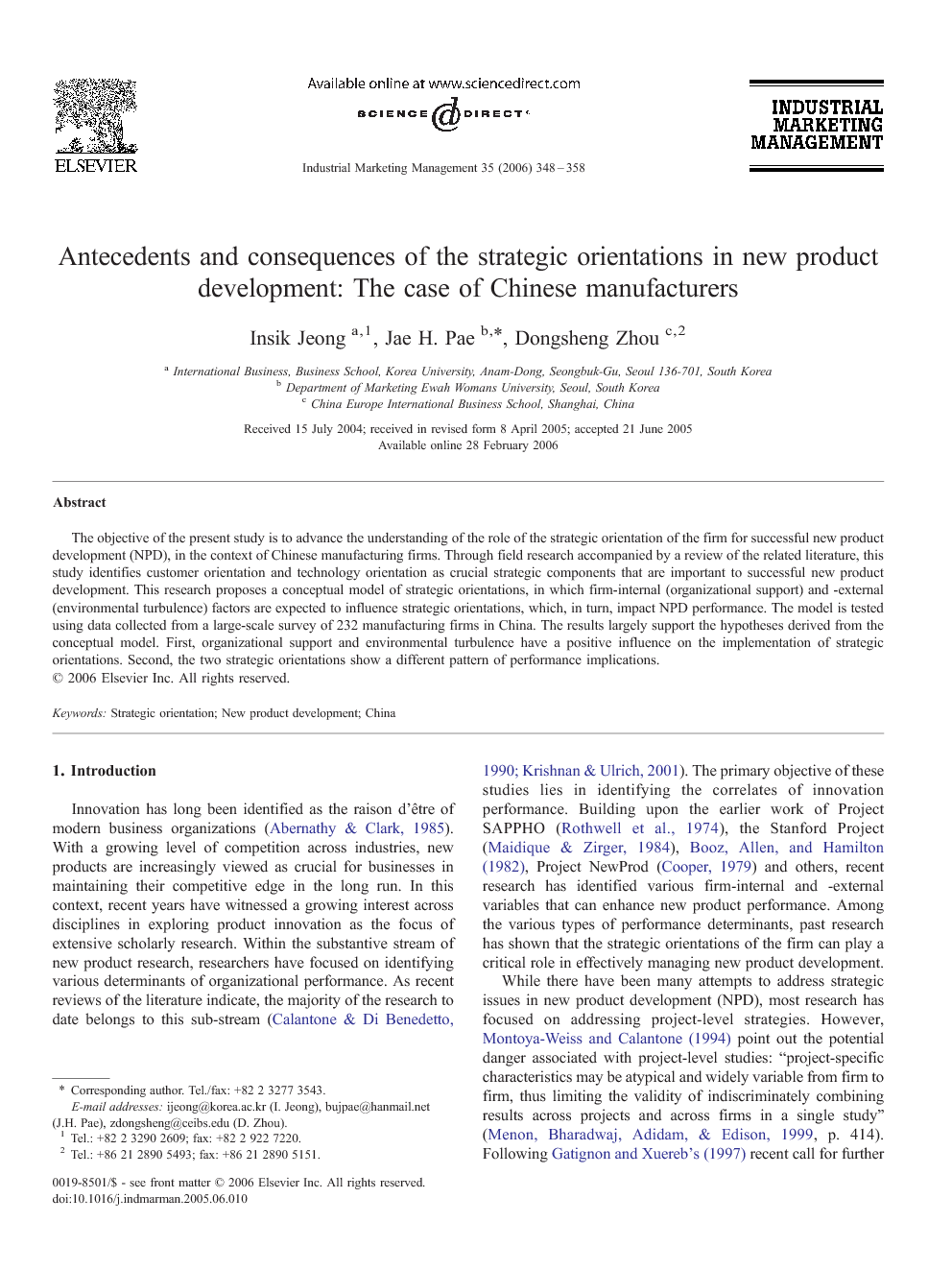 The objective of the present study is to advance the understanding of the role of the strategic orientation of the firm for successful new product development (NPD), in the context of Chinese manufacturing firms. Through field research accompanied by a review of the related literature, this study identifies customer orientation and technology orientation as crucial strategic components that are important to successful new product development. This research proposes a conceptual model of strategic orientations, in which firm-internal (organizational support) and -external (environmental turbulence) factors are expected to influence strategic orientations, which, in turn, impact NPD performance. The model is tested using data collected from a large-scale survey of 232 manufacturing firms in China. The results largely support the hypotheses derived from the conceptual model. First, organizational support and environmental turbulence have a positive influence on the implementation of strategic orientations. Second, the two strategic orientations show a different pattern of performance implications.

Innovation has long been identified as the raison d'être of modern business organizations (Abernathy & Clark, 1985). With a growing level of competition across industries, new products are increasingly viewed as crucial for businesses in maintaining their competitive edge in the long run. In this context, recent years have witnessed a growing interest across disciplines in exploring product innovation as the focus of extensive scholarly research. Within the substantive stream of new product research, researchers have focused on identifying various determinants of organizational performance. As recent reviews of the literature indicate, the majority of the research to date belongs to this sub-stream (Calantone and Di Benedetto, 1990 and Krishnan and Ulrich, 2001). The primary objective of these studies lies in identifying the correlates of innovation performance. Building upon the earlier work of Project SAPPHO (Rothwell et al., 1974), the Stanford Project (Maidique & Zirger, 1984), Booz, Allen, and Hamilton (1982), Project NewProd (Cooper, 1979) and others, recent research has identified various firm-internal and -external variables that can enhance new product performance. Among the various types of performance determinants, past research has shown that the strategic orientations of the firm can play a critical role in effectively managing new product development. While there have been many attempts to address strategic issues in new product development (NPD), most research has focused on addressing project-level strategies. However, Montoya-Weiss and Calantone (1994) point out the potential danger associated with project-level studies: “project-specific characteristics may be atypical and widely variable from firm to firm, thus limiting the validity of indiscriminately combining results across projects and across firms in a single study” (Menon, Bharadwaj, Adidam, & Edison, 1999, p. 414). Following Gatignon and Xuereb's (1997) recent call for further research on program-level NPD strategy, this study investigates the role of customer and technological orientations in successful new product development. Furthermore, in developing and commercializing new products, firms have to deal with various types of organizational contingencies that can affect the effectiveness of product innovation efforts. Given that innovation performance can be measured in various ways, recent research suggests that a firm's emphasis on a particular strategic orientation rather than on other orientations will likely enhance certain, though not necessarily all, aspects of performance. That is, depending on the relative emphasis placed on various strategic orientations, firms may or may not be able to achieve their innovation objectives. The utility of a strategic orientation will likely have a varying degree of influence on different performance dimensions. To address these issues, a conceptual framework of NPD was developed to integrate key organizational antecedents, strategic orientation variables and consequences in the specific context of new product development. The objective of the present study is to answer the following research questions. First, to what extent do internal and external organizational contextual variables influence NPD strategies? This study focuses on internal (organizational support on NPD) and external variables (market and technological turbulences) that can facilitate or impede the effective implementation of NPD strategy. The second goal is related to the performance implications of NPD strategy. That is, to what extent do the customer- and technology-oriented NPD strategies emphasized by a firm influence its organizational performance? To explore this issue, it examines performance from three different perspectives. Put differently, does the utility of certain strategies vary along various performance dimensions? This study investigates these issues with empirical evidence collected through a survey of Chinese manufacturing firms. Most NPD studies have been conducted in the context of developed countries (North America, Japan, etc.). While recent research has increasingly dealt with NPD practices in newly industrialized countries such as Korea and Taiwan (Song, Montoya-Weiss, & Schmidt, 1997), few studies have investigated NPD in emerging economies such as China (Di Benedetto and Song, 2003, Jeong, 2003, Liu, 2000 and Peng et al., 2001). Given the country's growing importance in the world economy over the coming decades, there is an urgent, practical need to shed further lights on NPD practices in this major, emerging market. In the following sections, first, a brief review of the relevant NPD literature will be provided to highlight the importance of strategic orientation in product innovation. A conceptual framework is then introduced, incorporating crucial firm-internal and -external antecedents to and consequences of strategic orientation. Following the prescriptive tradition prevalent in the NPD literature, it also examines the influence of strategic orientation on performance. Next, a detailed description of the methodology, for testing a set of hypotheses derived from the framework, is provided. The paper concludes with a summary of the findings, followed by a discussion of the research implications.