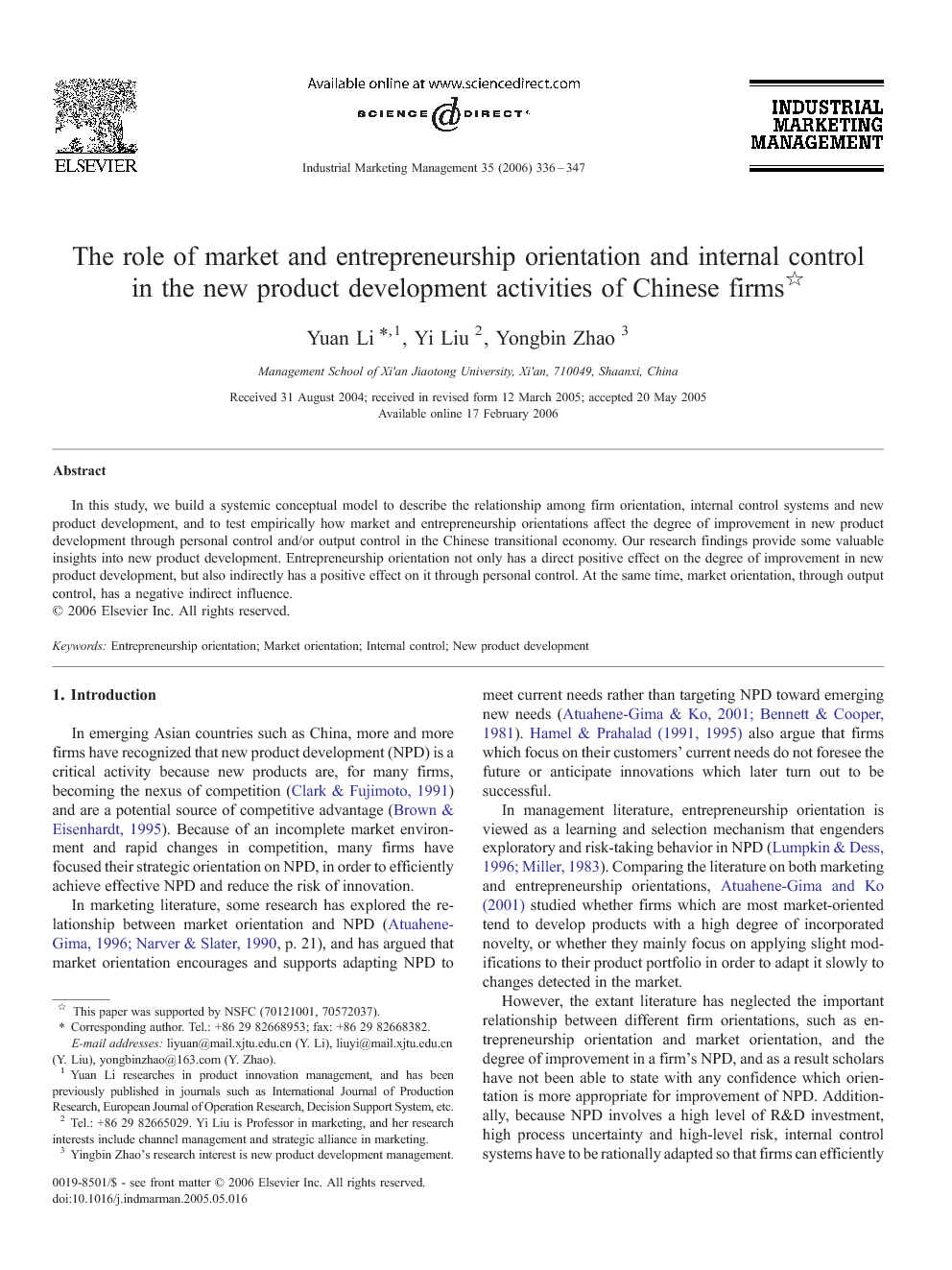 In emerging Asian countries such as China, more and more firms have recognized that new product development (NPD) is a critical activity because new products are, for many firms, becoming the nexus of competition (Clark & Fujimoto, 1991) and are a potential source of competitive advantage (Brown & Eisenhardt, 1995). Because of an incomplete market environment and rapid changes in competition, many firms have focused their strategic orientation on NPD, in order to efficiently achieve effective NPD and reduce the risk of innovation. In marketing literature, some research has explored the relationship between market orientation and NPD (Atuahene-Gima, 1996 and Narver and Slater, 1990, p. 21), and has argued that market orientation encourages and supports adapting NPD to meet current needs rather than targeting NPD toward emerging new needs (Atuahene-Gima and Ko, 2001 and Bennett and Cooper, 1981). Hamel and Prahalad, 1991 and Hamel and Prahalad, 1995 also argue that firms which focus on their customers' current needs do not foresee the future or anticipate innovations which later turn out to be successful. In management literature, entrepreneurship orientation is viewed as a learning and selection mechanism that engenders exploratory and risk-taking behavior in NPD (Lumpkin and Dess, 1996 and Miller, 1983). Comparing the literature on both marketing and entrepreneurship orientations, Atuahene-Gima and Ko (2001) studied whether firms which are most market-oriented tend to develop products with a high degree of incorporated novelty, or whether they mainly focus on applying slight modifications to their product portfolio in order to adapt it slowly to changes detected in the market. However, the extant literature has neglected the important relationship between different firm orientations, such as entrepreneurship orientation and market orientation, and the degree of improvement in a firm's NPD, and as a result scholars have not been able to state with any confidence which orientation is more appropriate for improvement of NPD. Additionally, because NPD involves a high level of R&D investment, high process uncertainty and high-level risk, internal control systems have to be rationally adapted so that firms can efficiently avoid the risks while achieving the goals. Therefore, internal control systems are the most important mediating factors through which firm orientation affects the degree of improvement in NPD, and they can powerfully ensure that a firm's NPD activities are completed in ways that lead to the attainment of the organization's goals (Robbins, 2001). Unfortunately, we have little knowledge about how both entrepreneurship and market orientations affect the degree of improvement of NPD through internal control systems. To address these significant gaps, drawing on organizational control theory (Eisenhardt, 1985, Hoskisson and Hitt, 1988, Langfield-Smith, 1997 and Simmons, 1991), we contribute to the literature by constructing a conceptual model to describe the relationship among firm orientation, internal control systems and the degree of improvement in NPD, and to develop knowledge about the path-dependence of the influence of a firm's orientation through internal control systems. By examining the relationship among these factors in Chinese firms, we will explain the effects of firm orientation and internal control systems on the degree of improvement in NPD. Unlike most extant research in this area, which has taken place in Western market economies, we here shift the focus to the context of firms in the Chinese emerging economy. In 2002, the firms in China finished 59,788 new products, and this data became 68,633 in 2003 (National Statistics Bureau of China, 2004). Increasing rate of new products reaches 14.8%, and greatly higher than the increasing rate of GDP (8.6%). But, compared with their western counterparts, Chinese firms are more resource deficient (Matthews, 2002). How Chinese firms overcome their resource deficiency and then implement efficient improvement in NPD is worth exploring further. Moreover, with the increasing importance of China in the global economy, a focus on the NPD of Chinese firms can help Western companies better understand the NPD strategy of Chinese firms and hence better prepare them to compete and collaborate with Chinese firms. Following is the structure of this paper. First, by reviewing literature on firm orientations and NPD, we present the conceptual model in Fig. 1. Second, we discuss the relationship between firm orientation (entrepreneurship orientation or market orientation), internal control systems (personal control or output control) and the degree of improvement in NPD, and then we present hypotheses for each discussion. Third, we describe the study method and the study result, and finally we discuss our findings.