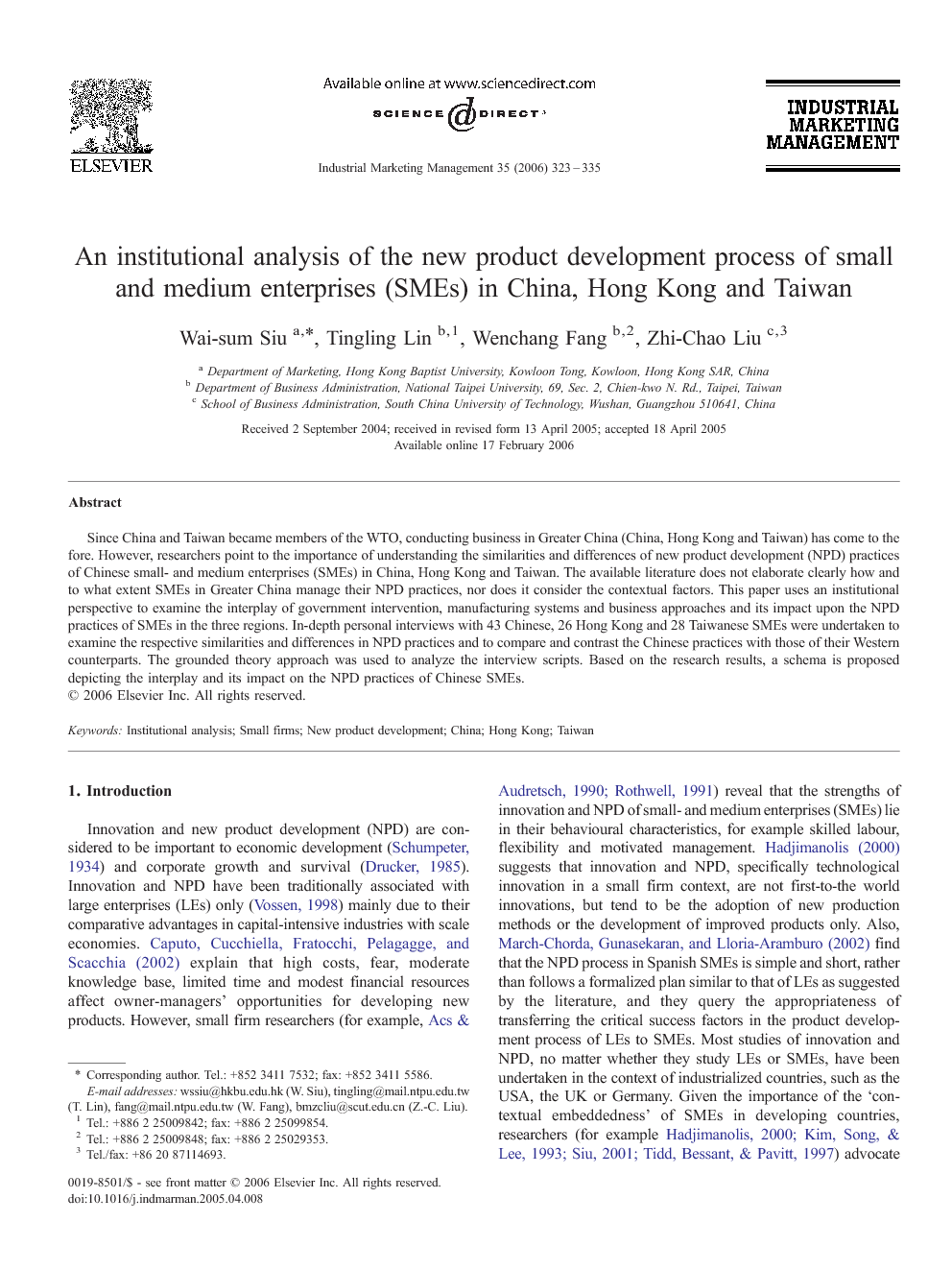 Since China and Taiwan became members of the WTO, conducting business in Greater China (China, Hong Kong and Taiwan) has come to the fore. However, researchers point to the importance of understanding the similarities and differences of new product development (NPD) practices of Chinese small- and medium enterprises (SMEs) in China, Hong Kong and Taiwan. The available literature does not elaborate clearly how and to what extent SMEs in Greater China manage their NPD practices, nor does it consider the contextual factors. This paper uses an institutional perspective to examine the interplay of government intervention, manufacturing systems and business approaches and its impact upon the NPD practices of SMEs in the three regions. In-depth personal interviews with 43 Chinese, 26 Hong Kong and 28 Taiwanese SMEs were undertaken to examine the respective similarities and differences in NPD practices and to compare and contrast the Chinese practices with those of their Western counterparts. The grounded theory approach was used to analyze the interview scripts. Based on the research results, a schema is proposed depicting the interplay and its impact on the NPD practices of Chinese SMEs.

Innovation and new product development (NPD) are considered to be important to economic development (Schumpeter, 1934) and corporate growth and survival (Drucker, 1985). Innovation and NPD have been traditionally associated with large enterprises (LEs) only (Vossen, 1998) mainly due to their comparative advantages in capital-intensive industries with scale economies. Caputo, Cucchiella, Fratocchi, Pelagagge, and Scacchia (2002) explain that high costs, fear, moderate knowledge base, limited time and modest financial resources affect owner-managers' opportunities for developing new products. However, small firm researchers (for example, Acs and Audretsch, 1990 and Rothwell, 1991) reveal that the strengths of innovation and NPD of small- and medium enterprises (SMEs) lie in their behavioural characteristics, for example skilled labour, flexibility and motivated management. Hadjimanolis (2000) suggests that innovation and NPD, specifically technological innovation in a small firm context, are not first-to-the world innovations, but tend to be the adoption of new production methods or the development of improved products only. Also, March-Chorda, Gunasekaran, and Lloria-Aramburo (2002) find that the NPD process in Spanish SMEs is simple and short, rather than follows a formalized plan similar to that of LEs as suggested by the literature, and they query the appropriateness of transferring the critical success factors in the product development process of LEs to SMEs. Most studies of innovation and NPD, no matter whether they study LEs or SMEs, have been undertaken in the context of industrialized countries, such as the USA, the UK or Germany. Given the importance of the ‘contextual embeddedness’ of SMEs in developing countries, researchers (for example Hadjimanolis, 2000, Kim et al., 1993, Siu, 2001 and Tidd et al., 1997) advocate further research into the NPD process of SMEs in developing and newly developed economies (NIEs), including China, Hong Kong and Taiwan. Due to Hong Kong's history as a British colony until 1997, it has evolved into a Chinese city with British characteristics. It is now a special administrative region of The People's Republic of China, a communist country which adopted an open door policy in 1979 and which is moving from a planned state to a socialist market economy. Taiwan was, variously, a Portuguese, a Dutch, a Spanish and a Japanese colony. The island was retroceded to the Republic of China following Japan's defeat and surrender in 1945. A review of relevant literature suggests that in China a trend has emerged of people doing business and becoming owner-managers (Siu, 1995). Hong Kong is also an entrepreneurial society (Siu & Martin, 1992) whereas Taiwan is a ‘boss’ island (Shieh, 1992). As shown in Table 1, SMEs in China, Hong Kong and Taiwan not only dominated the economies of their respective regions, but also contributed in large measure to increased levels of business activity and employment there. Recently, institutional analysis (Aoki, 2001) has been widely adopted to describe economic development and contextual factors; researchers (Lau, 1997 and So et al., 2001) specifically point to the importance of understanding the socio-cultural environment and the role of government when applying comparative institutional analysis to the three areas. Thus, this paper redresses the balance by adopting institutional analysis to examine the NPD processes of SMEs in the Chinese socio-cultural context and comparing the results with the respective practices in the West. The paper begins with an institutional analysis of the NPD practices of each individual economy. A conceptual framework related to the specific NPD process in a Chinese context is identified. This provides a solid foundation on which to develop research questions. The research design, sampling procedures, and analytical framework and methods are described in the following section. The research findings and implications are discussed, and a schema is proposed to depict the NPD practices of SMEs in China, Hong Kong and Taiwan. The paper ends with some concluding remarks.

The “scientific” search for generalisable, universally accepted laws and theories derived from a positivist approach to research in the social sciences has been pursued in the study of the newly emergent disciplines of small business and NPD. Much of the research on NPD has been conducted on LEs, and the results do not necessarily apply in the small firm context. Moreover, the broad western NPD principles may not be fully applicable to SMEs in non-western contexts. For far too long the impacts of culture and environment on Chinese NPD practices have been ignored (Siu, 2001). The motive in adopting the institutional analysis (Siu, 2005), however, has been a mix of the desire for truth and academic respectability taking into consideration the impacts of the indigenous and exogenous factors affecting the NPD practices of Chinese SMEs. This study has adopted such an approach to investigate the NPD practices of Chinese, Hong Kong and Taiwanese SMEs with the same cultural roots but operating in different market settings. The above review of the literature and the research findings suggest that government intervention, manufacturing systems and business approaches influence the NPD practices substantially. The schema also provides a framework for identifying the possible trajectories for NPD practices of Chinese, Hong Kong and Taiwanese SMEs in response to environmental changes. In the transition from a planned state to an ‘open’ socialist market economy, the Chinese government tries to protect against free market forces by creating a regionally closed and large market for Chinese enterprises. However, China's accession to the World Trade Organization (WTO) will make the market open to all, and the Chinese government has recently provided autonomy to Chinese enterprises and removed restrictions. Consequently, Chinese SMEs must, on the one hand, operate under the OBM systems to maintain the local market share, and on the other, develop new products to compete with the overseas brands which have gained access to China following the WTO agreement. Hong Kong SMEs, with technologies transferred from leading overseas consumer brands, will enter the China market due to its proximity and huge market potential. To compete with Chinese and overseas brands, Hong Kong SMEs have to establish manufacturing bases in China, but market with their own products and brand names. The Taiwanese government provides strong institutional support and hierarchies to enhance the production and marketing competences of Taiwanese SMEs in international markets. They are also moving from the OEM to the OBM systems and are developing their own brands. Thus, all SMEs will move ahead to operate under the OBM systems. Government intervention in China seems to be decreasing as the Chinese government exerts less influence under the quasi-free market system. Hong Kong will maintain its present status for about fifty years. The Taiwanese government is maintaining its semi-restricted but open economy. Chinese, Hong Kong and Taiwan SMEs will operate in an environment marked by lower levels of government intervention. Thus, the schema proposed in this paper provides a useful analytical framework to understand the NPD practices of Chinese SMEs in response to environmental changes. There are limitations in this research. First, there are sample size problems. For example, the sample sizes for Hong Kong (26) and Taiwan (28) are rather too low for good comparability with that of China (43). Second, the relation-orientation (Guanxi) may not be indicative of the same kind of networks as the personal contact network concept adopted in this research. Third, the interviewer relationship with the firm or someone in it is going to greatly affect the results they will obtain. Responses given in the interview may be thought out in the construct of the relationship with the interviewer and not in relation to the industry as a whole. This specific relationship is going to cause data to be skewed. Fourth, the sampling firms are small manufacturing firms that differ significantly from high-tech SMEs which use NPD or innovation as the only way to compete against the LEs. Thus, care should be taken in interpreting the results. However, the present approach of using in-depth interview offers several advantages. In cross-cultural research, scales or instruments developed within a particular culture may be culturally bound, and ideas and constructs underlying the instrument may be culturally limited (The Chinese Culture Connection, 1987). This integrative approach records the responses of respondents towards NPD, and Western constructs are not imposed. Thus, the next step will be to develop constructs related to NPD specifically suitable for Chinese owner-managers. This paper identifies a schema depicting NPD in a Chinese socio-cultural context. Based on the above findings, future research needs to proceed to refine the broad, vague research problem statements, and together with a relevant literature review, to develop smaller, more precise propositions or hypotheses for testing. More importantly, the next step to advance the body of understanding is to develop a measurement scale to determine the NPD orientation and also its impact on the company performance of Chinese small firms. Specifically, owner-managers' perception of the institutional factors, their attitude towards competition in innovation against LEs, the relation-orientation (Guanxi) and the decision to adopt various manufacturing systems need to be taken into consideration. It is argued that an understanding of why the Chinese, Hong Kong and Taiwanese SMEs behave differently requires a thorough understanding of the culture and operational environment of these firms. That they do not adhere to the normative “best practice” models of NPD practices derived largely from the study of LEs in western contexts does not necessarily mean that they are “wrong.” Likewise, that they behave differently, though they derive from the same cultural roots, does not mean that one has adapted more successfully than the others. Rather, it is more likely that they are responding to different environmental circumstances and influences which, up to now, have rarely been considered in any great detail in studies on the NPD practices of either LEs or SMEs. Socio-cultural influences should be considered when attempting to understand the NPD practices of Chinese SMEs in general, as should the macro-economic environment.