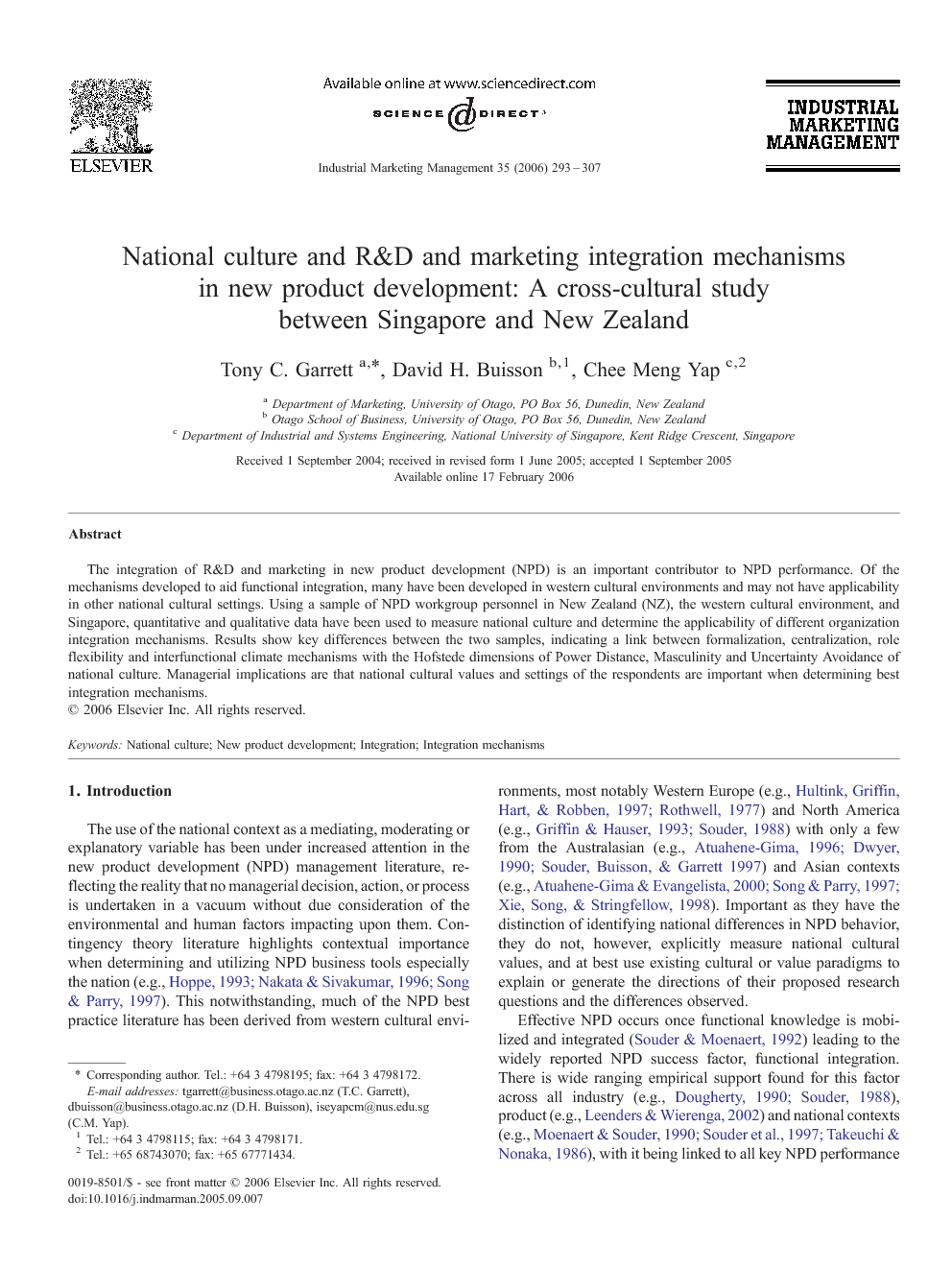 The integration of R&D and marketing in new product development (NPD) is an important contributor to NPD performance. Of the mechanisms developed to aid functional integration, many have been developed in western cultural environments and may not have applicability in other national cultural settings. Using a sample of NPD workgroup personnel in New Zealand (NZ), the western cultural environment, and Singapore, quantitative and qualitative data have been used to measure national culture and determine the applicability of different organization integration mechanisms. Results show key differences between the two samples, indicating a link between formalization, centralization, role flexibility and interfunctional climate mechanisms with the Hofstede dimensions of Power Distance, Masculinity and Uncertainty Avoidance of national culture. Managerial implications are that national cultural values and settings of the respondents are important when determining best integration mechanisms.

The use of the national context as a mediating, moderating or explanatory variable has been under increased attention in the new product development (NPD) management literature, reflecting the reality that no managerial decision, action, or process is undertaken in a vacuum without due consideration of the environmental and human factors impacting upon them. Contingency theory literature highlights contextual importance when determining and utilizing NPD business tools especially the nation (e.g., Hoppe, 1993, Nakata and Sivakumar, 1996 and Song and Parry, 1997). This notwithstanding, much of the NPD best practice literature has been derived from western cultural environments, most notably Western Europe (e.g., Hultink et al., 1997 and Rothwell, 1977) and North America (e.g., Griffin and Hauser, 1993 and Souder, 1988) with only a few from the Australasian (e.g., Atuahene-Gima, 1996, Dwyer, 1990 and Souder et al., 1997) and Asian contexts (e.g., Atuahene-Gima and Evangelista, 2000, Song and Parry, 1997 and Xie et al., 1998). Important as they have the distinction of identifying national differences in NPD behavior, they do not, however, explicitly measure national cultural values, and at best use existing cultural or value paradigms to explain or generate the directions of their proposed research questions and the differences observed. Effective NPD occurs once functional knowledge is mobilized and integrated (Souder & Moenaert, 1992) leading to the widely reported NPD success factor, functional integration. There is wide ranging empirical support found for this factor across all industry (e.g., Dougherty, 1990 and Souder, 1988), product (e.g., Leenders & Wierenga, 2002) and national contexts (e.g., Moenaert and Souder, 1990, Souder et al., 1997 and Takeuchi and Nonaka, 1986), with it being linked to all key NPD performance dimensions, e.g., NPD cycle time (e.g., Griffin, 1997), lead times, innovativeness, and NPD efficiency and effectiveness (Brown and Eisenhardt, 1995, Kahn and McDonough, 1997, Montoya-Weiss and Calantone, 1994 and Song et al., 1997). Integration is complicated by the complex networks of knowledge and business environments within which the modern firm operates (Griffin and Hauser, 1996, Leenders and Wierenga, 2002, Souder and Moenaert, 1992 and Van den Bulte and Moenaert, 1998). The complex organizational environment gives rise to physical, social, and organizational functional integration barriers hindering the effectiveness of NPD activities (Dougherty, 1992, Griffin and Hauser, 1996 and Leenders and Wierenga, 2002). A number of mechanisms to alleviate these integration problems have been proposed by the extant literature (e.g., Griffin and Hauser, 1996, Gupta et al., 1986, Kahn and McDonough, 1997 and Leenders and Wierenga, 2002). These range from the most potent mechanism identified, functional co-location (Griffin and Hauser, 1996, Kahn, 1996, Kahn and McDonough, 1997 and Leenders and Wierenga, 2002), to others that fall broadly into the categories of formalization, centralization, role flexibility, and interfunctional climate mechanisms (Moenaert, Souder, & De Meyer, 1994). The latter of these mechanisms are social in nature suggesting that the national environment in which they are implemented could enhance or hinder their effectiveness. Already there are examples in the literature that highlight that some mechanisms tend to be used in some national environments but not others, e.g., role flexibility and formalization mechanisms in New Zealand (NZ) (Souder et al., 1997), interfunctional climate mechanisms in Scandinavian environments (Souder & Jenssen, 1999), and centralization mechanisms in Singapore (Yap, Foo, Wong, & Singh, 1998). Fundamental questions arise: is there a linkage between the use of differing integration mechanisms and the national cultural context? If so what are the national cultural dimensions that could offer the best explanation for the differences? This paper examines therefore one national contextual difference, national culture, as a variable to explain differences in the use of integration mechanisms in evolutionary NPD projects in a two country comparative study: NZ (the western cultural environment) and Singapore (the Asian cultural environment). This paper first elaborates the core conceptual underpinnings leading to the propositions. An explanation of the two stage research design follows with the results and conclusion and implications.