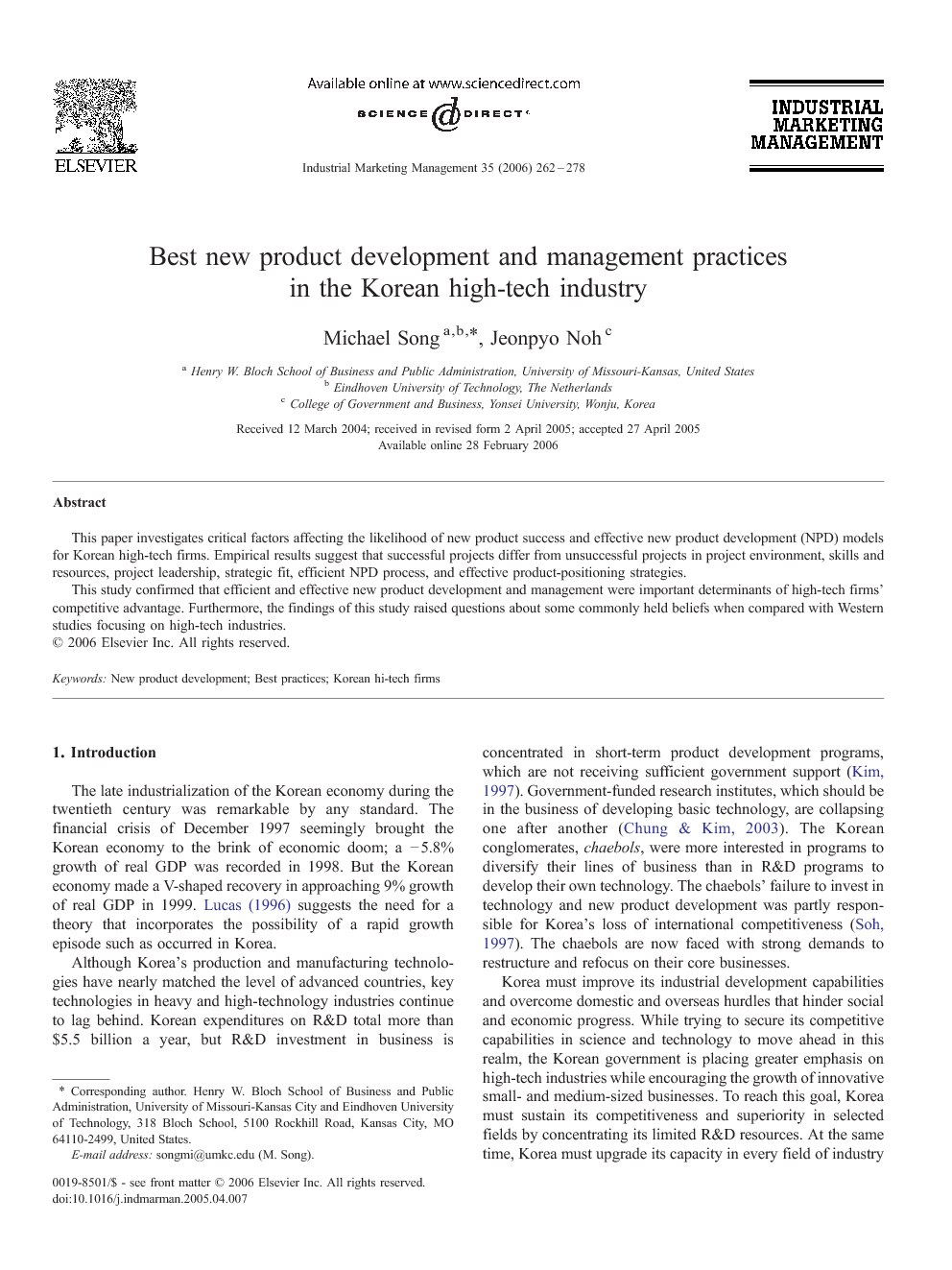 The late industrialization of the Korean economy during the twentieth century was remarkable by any standard. The financial crisis of December 1997 seemingly brought the Korean economy to the brink of economic doom; a − 5.8% growth of real GDP was recorded in 1998. But the Korean economy made a V-shaped recovery in approaching 9% growth of real GDP in 1999. Lucas (1996) suggests the need for a theory that incorporates the possibility of a rapid growth episode such as occurred in Korea. Although Korea's production and manufacturing technologies have nearly matched the level of advanced countries, key technologies in heavy and high-technology industries continue to lag behind. Korean expenditures on R&D total more than $5.5 billion a year, but R&D investment in business is concentrated in short-term product development programs, which are not receiving sufficient government support (Kim, 1997). Government-funded research institutes, which should be in the business of developing basic technology, are collapsing one after another (Chung & Kim, 2003). The Korean conglomerates, chaebols, were more interested in programs to diversify their lines of business than in R&D programs to develop their own technology. The chaebols' failure to invest in technology and new product development was partly responsible for Korea's loss of international competitiveness (Soh, 1997). The chaebols are now faced with strong demands to restructure and refocus on their core businesses. Korea must improve its industrial development capabilities and overcome domestic and overseas hurdles that hinder social and economic progress. While trying to secure its competitive capabilities in science and technology to move ahead in this realm, the Korean government is placing greater emphasis on high-tech industries while encouraging the growth of innovative small- and medium-sized businesses. To reach this goal, Korea must sustain its competitiveness and superiority in selected fields by concentrating its limited R&D resources. At the same time, Korea must upgrade its capacity in every field of industry and technology and prepare a wide array of plans to develop new and advanced products that will bring its technological levels on par with those of the world's leading countries. As Porter (1990, p. 470) points out, product and process technology in Korean industries often lags a generation or two behind the world leaders in these areas. To restore their competitiveness during a time when advanced countries are guarding their technology more closely, Korean firms must develop and manage innovation better. Because new products are vital to long-term survival and viability, the process of developing them is a critical endeavor in today's globally competitive environment (Calantone et al., 1996, Song and Parry, 1997b and Song et al., 1997). However, failures in new product development (NPD) can cost hundreds of million of dollars. Addressing critical issues and opportunities in new product development, Wind and Mahajan (1997) emphasize that assessing the best practices in NPD could provide insight into what new concepts and tools are needed to help management improve the probability of successful NPD. The purpose of this paper is to examine the best new product development and management practices in the Korean high-tech industry. This paper seeks to examine the critical factors affecting the likelihood of new product success. The model we test is based on previous research on NPD that is Korean context-specific. In a comprehensive review of empirical research on NPD, Brown and Eisenhardt (1995) present an important integrative framework for the organization-oriented, project-level NPD research of the last 25 years. Their framework brings together three major streams of research in the NPD area: (1) product development as a rational plan, (2) product development as a communication web and (3) product development as disciplined problem-solving. All three streams of research have strengths and weaknesses as well as overlapping and complementary interests (Brown & Eisenhardt, 1995). For the purposes of this study, we concentrate our efforts on empirically testing a model of NPD that integrates aspects of the rational plan and disciplined problem-solving streams in a Korean context. Rather than narrowly focusing on depth as in the communication web perspective, we emphasized breadth as in the rational plan perspective since our objective is to uncover the Korean best practices in NPD. Also, a series of case study interviews revealed that the incorporation of the disciplined problem-solving perspective enables us to better understand Korean NPD process.