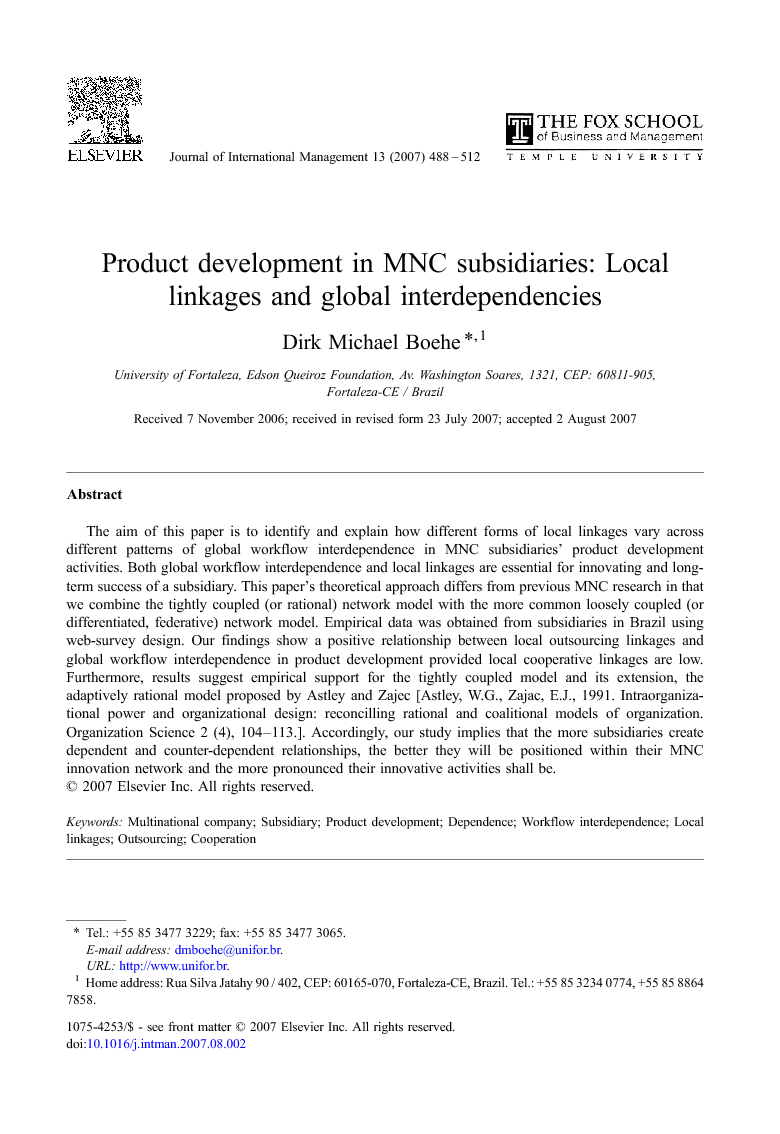 The aim of this paper is to identify and explain how different forms of local linkages vary across different patterns of global workflow interdependence in MNC subsidiaries' product development activities. Both global workflow interdependence and local linkages are essential for innovating and long-term success of a subsidiary. This paper's theoretical approach differs from previous MNC research in that we combine the tightly coupled (or rational) network model with the more common loosely coupled (or differentiated, federative) network model. Empirical data was obtained from subsidiaries in Brazil using web-survey design. Our findings show a positive relationship between local outsourcing linkages and global workflow interdependence in product development provided local cooperative linkages are low. Furthermore, results suggest empirical support for the tightly coupled model and its extension, the adaptively rational model proposed by Astley and Zajec [Astley, W.G., Zajac, E.J., 1991. Intraorganizational power and organizational design: reconcilling rational and coalitional models of organization. Organization Science 2 (4), 104–113.]. Accordingly, our study implies that the more subsidiaries create dependent and counter-dependent relationships, the better they will be positioned within their MNC innovation network and the more pronounced their innovative activities shall be.

Inter-organizational relations have been considered crucial for innovating (von Hippel, 1988 and Lundvall, 1988). Innovation in subsidiaries of multinational companies (MNCs) may therefore be nurtured drawing on linkages with local clients, suppliers, technology centers, universities or research institutes as well as on global relations with peer subsidiaries or headquarters (Schmid and Schurig, 2003). Nevertheless, some prior research has also progressed, suggesting a possible trade-off between a subsidiary's relations with peer MNC units on the one hand and its linkages with local partners on the other (Holm and Pedersen, 2000). Although some researchers have centered their attention on possible relationships between local responsiveness and global integration (Bartlett and Ghoshal, 1989) as well as on a subsidiary's external and internal network (Ghoshal and Bartlett, 1990), earlier studies have not sufficiently examined how different types of local linkages may be related to different types of relations among MNC units. Specifically, the bulk of previous research is concerned with the flow of knowledge, resource and capital among MNC units (Gupta and Govindarajan, 1991, Gupta and Govindarajan, 1994, Nohria and Ghoshal, 1997 and Randoy and Li, 2000), but does not connect role typologies and taxonomies to different types of local linkages. Likewise, little research has been carried out concerning local linkages that are conceptually different from the responsiveness or embeddedness notion, such as local outsourcing in product development. While previous studies have been designed using the federative MNC network concept (Ghoshal and Bartlett, 1990), this paper argues that the latter needs to be combined with the rational network model (Astley and Zajac, 1990) in order to take account of the increasing integration of multinational networks. The rational network model focuses on tightly coupled inter-unit workflow interdependencies and will be used for the first time in survey research on exchange relations in product development between different MNC units. Accordingly, this study addresses the aforementioned gaps with the following interrelated research questions: First of all, how are different degrees of global workflow interdependence related to different forms of local linkages? Secondly, to what degree do different patterns of local linkages vary across subsidiaries with different forms of global workflow interdependence in product development? Thirdly, if they vary, how can these variations be explained? Examining such variations could help researchers better understand why some subsidiaries create local linkages while others do not and why some subsidiaries are well-integrated in global innovation activities while others are not. This paper is motivated by the following considerations: analysing different patterns of global workflow interdependence may provide interesting clues to the understanding of the position a subsidiary occupies within the MNC network and its relevance for the MNC's global division of labor in product development. Addressing these issues is also important since they may guide managerial choices considering costs and benefits of different kinds of local linkages and global workflow interdependencies. These choices are relevant to subsidiary managers who are interested in contributing to the overall success of the MNC as well as to head office managers interested in more efficient organizational designs. The sample, product development units in MNC subsidiaries located in an emerging economy (Brazil), was selected intentionally because it may provide new insights distinct from those obtained in industrialized countries where almost all surveys of subsidiaries have been carried out so far. Specifically, innovative activities in a latecomer country as far as global integration of MNC subsidiaries and innovation are concerned, may uncover yet unrealized phenomena and contribute to examining the relevance of local linkages distinct from those stressed in prior research. The remainder of the paper is structured as follows: the next section explains the theoretical underpinnings of the study and formulates some hypotheses to be tested in the empirical part. There follows a section on the research method, which gives details on characteristics of the web survey design. Next, the results from regression and cluster analysis are presented. Finally, we provide some conceptual interpretations of the findings as well as recommendations for future research.