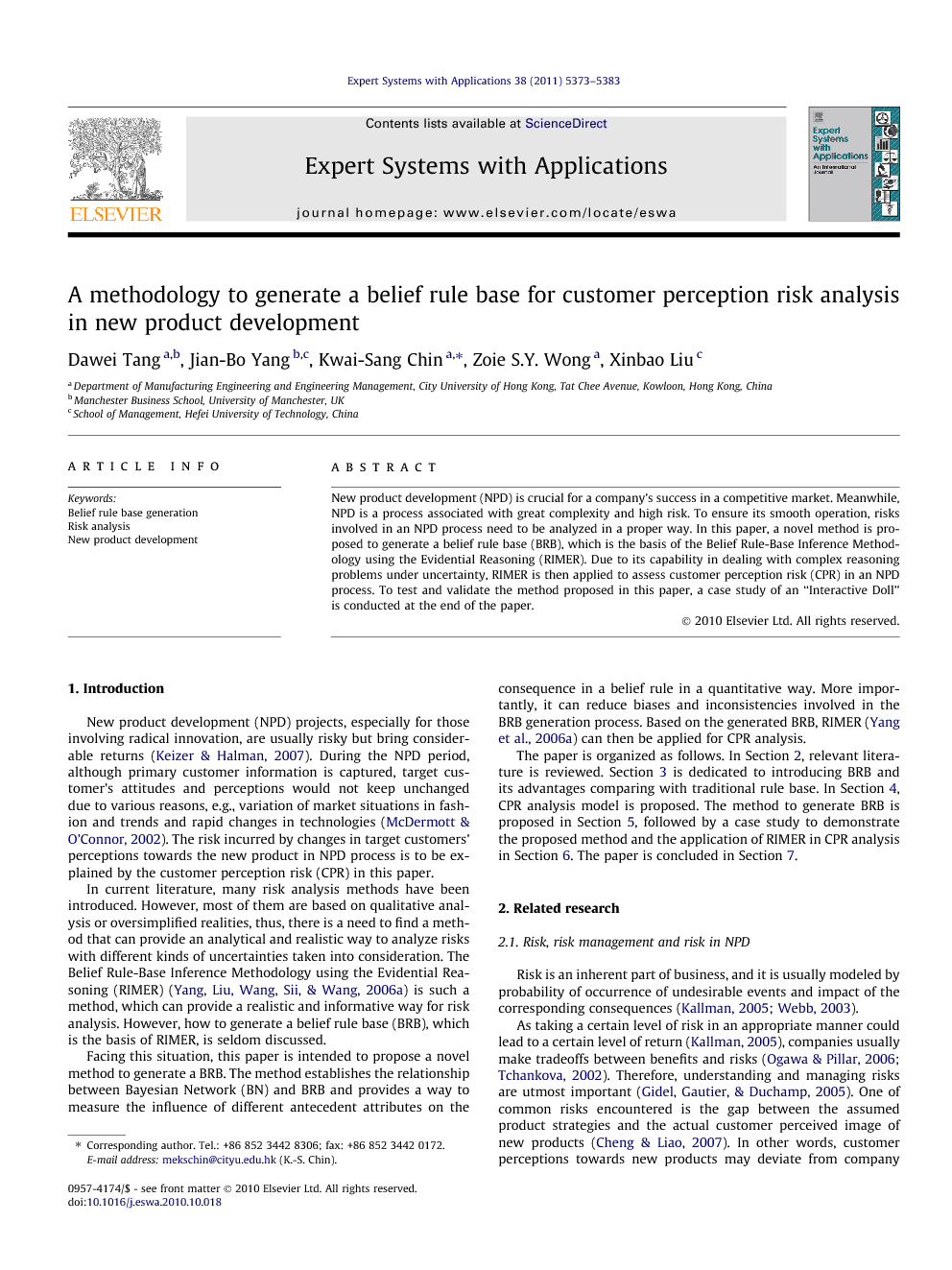 New product development (NPD) is crucial for a company’s success in a competitive market. Meanwhile, NPD is a process associated with great complexity and high risk. To ensure its smooth operation, risks involved in an NPD process need to be analyzed in a proper way. In this paper, a novel method is proposed to generate a belief rule base (BRB), which is the basis of the Belief Rule-Base Inference Methodology using the Evidential Reasoning (RIMER). Due to its capability in dealing with complex reasoning problems under uncertainty, RIMER is then applied to assess customer perception risk (CPR) in an NPD process. To test and validate the method proposed in this paper, a case study of an “Interactive Doll” is conducted at the end of the paper

New product development (NPD) projects, especially for those involving radical innovation, are usually risky but bring considerable returns (Keizer & Halman, 2007). During the NPD period, although primary customer information is captured, target customer’s attitudes and perceptions would not keep unchanged due to various reasons, e.g., variation of market situations in fashion and trends and rapid changes in technologies (McDermott & O’Connor, 2002). The risk incurred by changes in target customers’ perceptions towards the new product in NPD process is to be explained by the customer perception risk (CPR) in this paper. In current literature, many risk analysis methods have been introduced. However, most of them are based on qualitative analysis or oversimplified realities, thus, there is a need to find a method that can provide an analytical and realistic way to analyze risks with different kinds of uncertainties taken into consideration. The Belief Rule-Base Inference Methodology using the Evidential Reasoning (RIMER) (Yang, Liu, Wang, Sii, & Wang, 2006a) is such a method, which can provide a realistic and informative way for risk analysis. However, how to generate a belief rule base (BRB), which is the basis of RIMER, is seldom discussed. Facing this situation, this paper is intended to propose a novel method to generate a BRB. The method establishes the relationship between Bayesian Network (BN) and BRB and provides a way to measure the influence of different antecedent attributes on the consequence in a belief rule in a quantitative way. More importantly, it can reduce biases and inconsistencies involved in the BRB generation process. Based on the generated BRB, RIMER (Yang et al., 2006a) can then be applied for CPR analysis. The paper is organized as follows. In Section 2, relevant literature is reviewed. Section 3 is dedicated to introducing BRB and its advantages comparing with traditional rule base. In Section 4, CPR analysis model is proposed. The method to generate BRB is proposed in Section 5, followed by a case study to demonstrate the proposed method and the application of RIMER in CPR analysis in Section 6. The paper is concluded in Section 7.

RIMER can be applied to perform reasoning under the environment with little information and much uncertainty due to its capability in accommodating different forms of information, which can be both complete and incomplete. However, its performance is highly dependant on the rationality and consistency of its basis, BRB. Traditionally, the parameters of BRB, including belief degrees in belief rules, attribute weights and rule weights, are specified by experts directly based on their knowledge. Due to the complexity of the reasoning task, such specifications will inevitably involve individual biases and inconsistencies. Facing this situation, this paper proposes a novel method to generate BRBs. The method contains three steps: generating belief rules, generating rule weights and generating attribute weights. By applying the method, the biases and inconsistencies involved in the BRB generation process can be reduced as the method only need experts perform pair-wise comparison instead of specifying belief degrees, rules weights and attribute weights directly. In addition, the method provides a new way to quantify the influence of antecedent attributes on the consequence by means of the so-called ‘Influence Factor’. Based on the generated BRBs, RIMER can be applied for reasoning. A case study is performed to validate the method in NPD risk analysis. It is about the CPR analysis during the development of a new “Interactive Doll”. From the case study, we can see that the method proposed in this paper can help to build a BRB rationally and consistently. Based on such a BRB, RIMER is applied to evaluate CPR with different forms of input information, which can be either complete or incomplete, and the input incompleteness is reflected in the analysis results. Under an environment with much innovation and little experience, such flexibility and rationality can provide an informative way for NPD risk analysis and decision making.