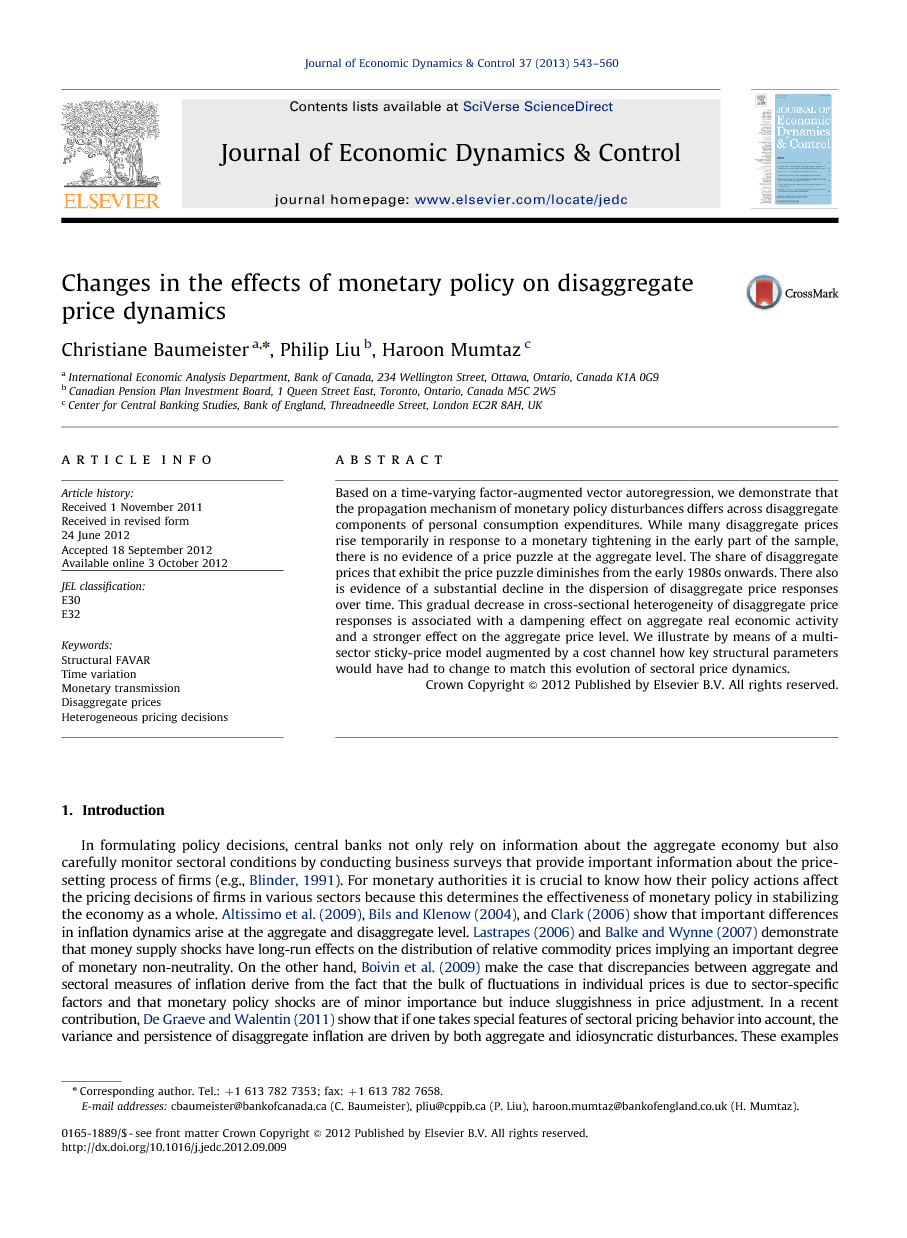 Based on a time-varying factor-augmented vector autoregression, we demonstrate that the propagation mechanism of monetary policy disturbances differs across disaggregate components of personal consumption expenditures. While many disaggregate prices rise temporarily in response to a monetary tightening in the early part of the sample, there is no evidence of a price puzzle at the aggregate level. The share of disaggregate prices that exhibit the price puzzle diminishes from the early 1980s onwards. There also is evidence of a substantial decline in the dispersion of disaggregate price responses over time. This gradual decrease in cross-sectional heterogeneity of disaggregate price responses is associated with a dampening effect on aggregate real economic activity and a stronger effect on the aggregate price level. We illustrate by means of a multi-sector sticky-price model augmented by a cost channel how key structural parameters would have had to change to match this evolution of sectoral price dynamics.

5. Conclusions We examined the evolution of the US monetary policy transmission mechanism over time at both the aggregate and disaggregate level using an extended version of the factor-augmented VAR model proposed by Bernanke et al. (2005) that incorporates time variation in the parameters. Our empirical framework includes information from almost 600 macroeconomic and financial indicators as well as disaggregate price and quantity variables representing various sectors of the economy. By allowing for time variation in the coefficients and stochastic volatility in the variances of the shocks, we are able to characterize the time-varying dynamic responses to a contractionary monetary policy shock for macroeconomic aggregates and for sectoral prices and quantities in personal consumption expenditures. Our analysis enhances the understanding of the behavior of disaggregate prices in response to monetary policy disturbances, but also of the role of price-setting behavior in the propagation mechanism. It also sheds light on how this role has evolved in response to changes in the macroeconomic environment. Consistent with some related studies using alternative datasets and empirical methods, we find no evidence of a price puzzle for any of the aggregate price level measures. However, at the disaggregate level, many sectoral price responses display a temporary price puzzle during the 1970s, which diminishes gradually from the early 1980s onwards. We also find a shift in the relationship between the responses of prices relative to consumption volumes which tends to suggest that over time nominal adjustment of the economy following a monetary policy tightening increasingly takes place by prices rather than by quantities. This finding at the disaggregate level coincides with a decline in the real effects of monetary policy surprises on economy-wide real activity measures and a greater sensitivity of aggregate price responses. Apart from considerable heterogeneity in the median responses of prices at the disaggregate level, we also observe important changes in the cross-sectional distribution of price responses over the sample period. While the price dispersion diminishes over time, it widens considerably over the forecast horizon and is very persistent in the long run. Our analysis adds to a growing literature that tries to bring evidence on the heterogeneity of sectoral prices to bear on our understanding of the transmission of structural shocks to the aggregate economy by providing new empirical insights on the relevance of time variation for aggregate and disaggregate dynamics after monetary policy shocks. To illustrate the potential sources for these time-varying dynamics, we used a version of the multi-sector DSGE model proposed by Nakajima et al. (2010) that features heterogeneity in price stickiness across sectors and a cost channel of monetary policy to investigate which changes in structural parameters are required to account for changes in the cross-sectional distribution of prices and quantities over time. By means of simulation exercises, we showed that the gradual attenuation of disaggregate price puzzles is consistent with a decrease in the importance of the cost channel and in the degree of nominal wage stickiness. Therefore, positive sectoral price responses following a restrictive monetary policy shock may not be a statistical artifact, but have economic content. They may indicate the existence of additional channels of transmission at the disaggregate level, which are often missing in standard macroeconomic models employed in policy analysis. However, the channels analyzed here are not the only possible mechanisms that are compatible with the empirical findings documented in this paper. An interesting avenue for future research could be to explore alternative channels that might be at work.