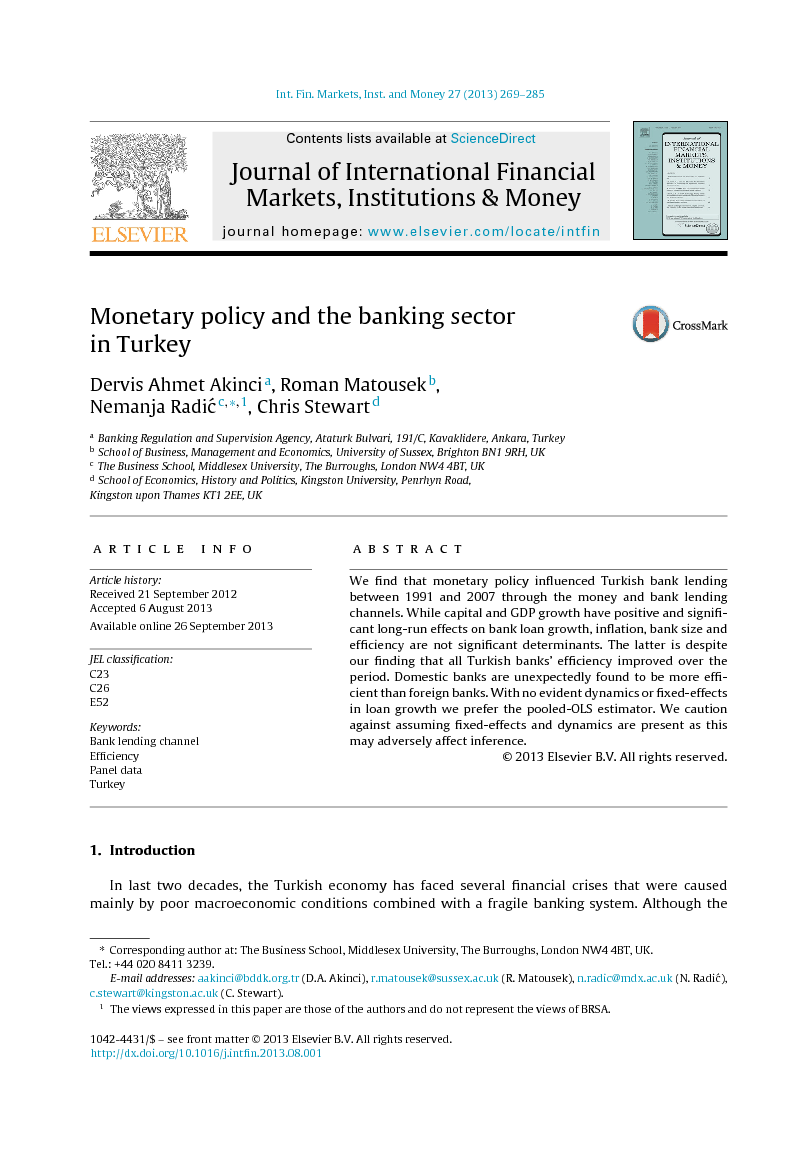 We find that monetary policy influenced Turkish bank lending between 1991 and 2007 through the money and bank lending channels. While capital and GDP growth have positive and significant long-run effects on bank loan growth, inflation, bank size and efficiency are not significant determinants. The latter is despite our finding that all Turkish banks’ efficiency improved over the period. Domestic banks are unexpectedly found to be more efficient than foreign banks. With no evident dynamics or fixed-effects in loan growth we prefer the pooled-OLS estimator. We caution against assuming fixed-effects and dynamics are present as this may adversely affect inference.

In last two decades, the Turkish economy has faced several financial crises that were caused mainly by poor macroeconomic conditions combined with a fragile banking system. Although the Turkish government initiated in the early 1990s structural, legal and institutional reforms banks’ balance sheets continue to be affected by the high percentage of non-performing loans (NPLs) for a detailed discussion see, for example, Alp and Elekdag (2011), Bakir and Öniş (2010), Ozkan-Gunay and Tektas (2006) among others. The banking sector has been the backbone of the Turkish economy and the Government realised that a sound and efficient banking sector requires an adequate macro- and micro-economic environment in which to operate, that will be consistent with, and help promote, the widening financial activities of commercial banks. Several research studies have recently been published on the performance and efficiency of the Turkish banking system, see, for example, Fukuyama and Matousek (2011), Ozkan-Gunay and Tektas (2008), Aysan and Ceyhan (2008), Demir et al., 2005 and Demir et al., 2007. Nevertheless, we identify a gap in current research on the Turkish banking system and monetary policy. In recent years there have been a large number of studies that try to explore the impact of monetary policy shocks on banks’ behaviour through the bank lending channel (BLC). See, for example, Kashyap and Stein (2000), Ehrmann et al. (2003), Gambacorta (2005), Balázs and MacDonald (2009), Matousek and Sarantis (2009), Brissimis and Delis (2009), Gambacorta and Marques-Ibanez (2011), Kishan and Opiela (2012), Brämer et al. (2013), among others. This study contributes to this ongoing research by providing a detailed overview of the development of the Turkish banking system in the last twenty years. In particular, we analyse bank performance over the period 1991–2007. Such a long observed period allows us to capture the effects of the restructuring and consolidation process of the financial markets and to identify actual or potential problems in the Turkish banking system and individual banks. Such information is valuable in the process of further banking consolidation and restructuring. In addition, it contributes to the current discussion about the competitiveness and efficiency of the Turkish banking sector in the context of the EU enlargement process. If there is significant inefficiency among banks there may be room for structural changes, increased competition, mergers and acquisitions. The paper contributes to policy makers and bank management by analysing the impact of the liberalisation and restructuring process of the banking sector in Turkey. Further, it provides policy recommendations for Turkey where significant challenges in banking consolidation remain. Throughout the study we show the following: Firstly, based upon inference from our favoured pooled-OLS specification, that monetary policy has a direct impact upon bank loans in Turkey through the money lending channel. Secondly, we provide evidence that the BLC in Turkey depends on bank characteristics (liquidity and capital) which is consistent with recent empirical studies for transition economies, for example, Balázs and MacDonald (2009) and Matousek and Sarantis (2009). Thirdly, banks’ liberalisation and restructuring processes in the early 1990s and 2001 had the expected effect on the Turkish banking system in terms of improved performance (increased efficiency). This result contrasts with the findings published by Ozkan-Gunay and Tektas (2008), Demir et al. (2007), among others. Fourthly, we assess the hypothesis that foreign banks should be more efficient than domestic banks (Isik and Hassan (2002), Mercan and Yolalan (2000)). This hypothesis is in line with the results from transition economies see, for example, De Haas and Van Lelyveld (2006). Our findings are not consistent with this hypothesis, indicating that domestic banks are, on average, more efficient than foreign banks. Fifthly, we show that bank efficiency is not an important determinant in the BLC or of the growth of bank loans more generally in Turkey. Finally, we find that while there are dynamics in the levels of the data they are not evident in their first differences and so we do not favour inference from the Arellano and Bond (1991) estimator. We further find an absence of significant fixed-effects which suggests that our first difference specification likely removes any fixed-effects that are present in the levels of the data. Hence, we favour inference from the pooled-OLS estimator. We note that previous research on the BLC using panel data that assumes the presence of dynamics and fixed-effects in the first differenced data may not, therefore, be using the most appropriate estimators for inference. We suggest that future research in this area gives full consideration to the most appropriate estimator to be used in any particular application. The paper is structured as follows: Section 2 reviews current studies on the BLC and bank efficiency. Section 3 outlines the estimation methodology and measuring cost efficiency in the banking industry. Section 4 discusses the results while Section 5 concludes.