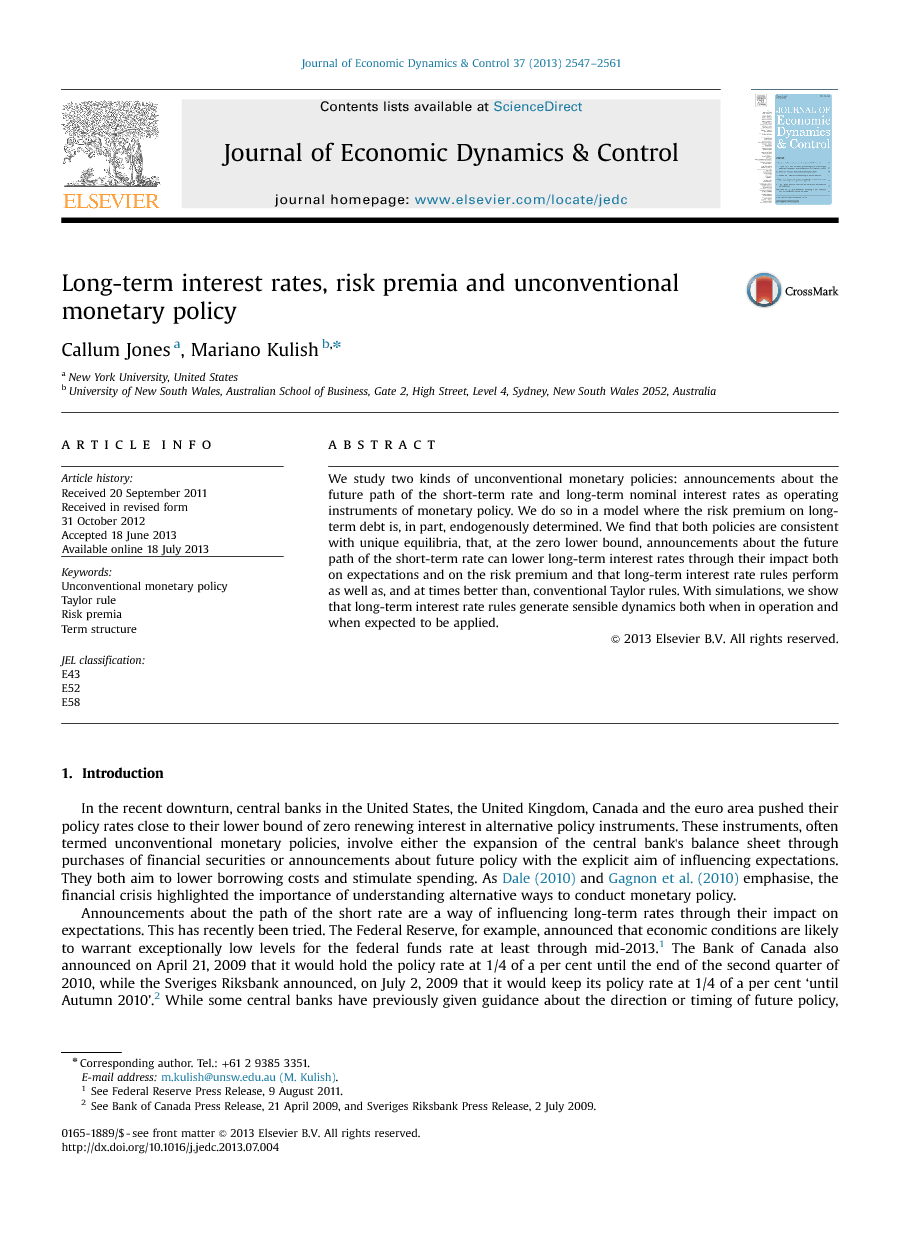 We study two kinds of unconventional monetary policies: announcements about the future path of the short-term rate and long-term nominal interest rates as operating instruments of monetary policy. We do so in a model where the risk premium on long-term debt is, in part, endogenously determined. We find that both policies are consistent with unique equilibria, that, at the zero lower bound, announcements about the future path of the short-term rate can lower long-term interest rates through their impact both on expectations and on the risk premium and that long-term interest rate rules perform as well as, and at times better than, conventional Taylor rules. With simulations, we show that long-term interest rate rules generate sensible dynamics both when in operation and when expected to be applied.

In the recent downturn, central banks in the United States, the United Kingdom, Canada and the euro area pushed their policy rates close to their lower bound of zero renewing interest in alternative policy instruments. These instruments, often termed unconventional monetary policies, involve either the expansion of the central bank's balance sheet through purchases of financial securities or announcements about future policy with the explicit aim of influencing expectations. They both aim to lower borrowing costs and stimulate spending. As Dale (2010) and Gagnon et al. (2010) emphasise, the financial crisis highlighted the importance of understanding alternative ways to conduct monetary policy. Announcements about the path of the short rate are a way of influencing long-term rates through their impact on expectations. This has recently been tried. The Federal Reserve, for example, announced that economic conditions are likely to warrant exceptionally low levels for the federal funds rate at least through mid-2013.1 The Bank of Canada also announced on April 21, 2009 that it would hold the policy rate at 1/4 of a per cent until the end of the second quarter of 2010, while the Sveriges Riksbank announced, on July 2, 2009 that it would keep its policy rate at 1/4 of a per cent ‘until Autumn 2010’.2 While some central banks have previously given guidance about the direction or timing of future policy, these announcements have at least been interpreted as an explicit attempt to influence expectations by communicating a temporary deviation from the existing determinants of the policy setting. Another possibility is for the central bank to purchase long-term securities in order to push down longer term nominal interest rates. Indeed, the Bank of Japan, and more recently the Federal Reserve and the Bank of England, has pursued purchases of long-term assets.3Bernanke (2002) was one of the first to discuss this option,4 while Clouse et al. (2003) provided more detail. As Fig. 1 shows, even when short rates have been close to zero in the recent episode, long rates have remained well above, suggesting that there may be greater capacity to stimulate the economy with long-term rates rather than short-term rates.In this paper, we consider the more direct option of using a long-term interest rate as the policy instrument. Studying this possibility is more than just theoretically important. For instance, since late 1999 the Swiss National Bank has set policy by fixing a target range for the 3-month money-market rate rather than setting a target for the conventional instrument of a very short-term interest rate. Jordan and Peytrignet (2007) argue that this choice gives the Swiss National Bank more flexibility to respond to financial market developments. Previous research suggests that long-term interest rate rules share the desirable properties of Taylor rules, can support unique equilibria, and their performance is comparable to more conventional Taylor rules.5 However, previous studies do not contain a risk premium, or if there is one, it is exogenous. This raises important theoretical issues about the use of long-term interest rate rules. In particular, can long-term interest rate rules achieve a unique equilibrium if an endogenous risk premium prices long-term debt? And if so, how do these rules perform and what dynamics do they entail? In this paper, we explore these questions in the context of a model in which the risk premium is endogenous and examine two kinds of unconventional monetary policies: announcements about the future path of the short-term rate and long-term nominal interest rates as operating instruments of monetary policy. These questions raise also a more general issue: that of understanding an economy's behaviour in the context of changing policies. As Taylor (1993) stresses, the temporary deviation from one policy and the transition towards another are relevant practical concerns despite having received little academic attention. An important contribution of our paper is to account for these changes with the rational expectations solution of Cagliarini and Kulish (2013) which encompasses anticipated structural changes. In the next section we discuss the model which we then use in Section 3 to analyse announcements about the future path of the short rate and transitions to a long-term interest rate rule. In Section 4, we analyse existence, uniqueness and multiplicity of the equilibrium under long-term interest rate rules and in Section 5 we study their associated dynamics. In Section 6 we find their optimal settings which we compare to those of Taylor rules. In Section 7 we conclude.