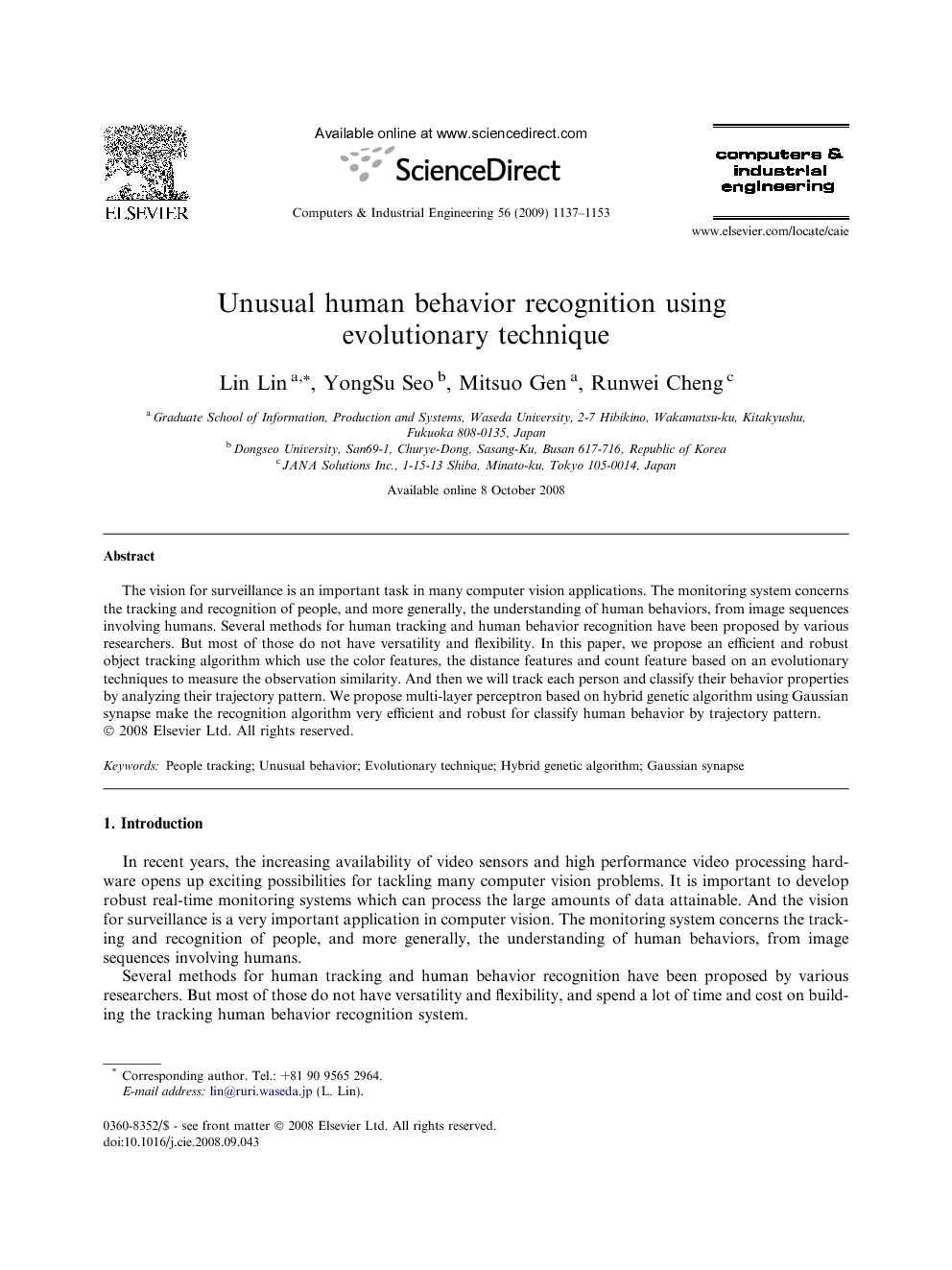 The vision for surveillance is an important task in many computer vision applications. The monitoring system concerns the tracking and recognition of people, and more generally, the understanding of human behaviors, from image sequences involving humans. Several methods for human tracking and human behavior recognition have been proposed by various researchers. But most of those do not have versatility and flexibility. In this paper, we propose an efficient and robust object tracking algorithm which use the color features, the distance features and count feature based on an evolutionary techniques to measure the observation similarity. And then we will track each person and classify their behavior properties by analyzing their trajectory pattern. We propose multi-layer perceptron based on hybrid genetic algorithm using Gaussian synapse make the recognition algorithm very efficient and robust for classify human behavior by trajectory pattern.

In recent years, the increasing availability of video sensors and high performance video processing hardware opens up exciting possibilities for tackling many computer vision problems. It is important to develop robust real-time monitoring systems which can process the large amounts of data attainable. And the vision for surveillance is a very important application in computer vision. The monitoring system concerns the tracking and recognition of people, and more generally, the understanding of human behaviors, from image sequences involving humans. Several methods for human tracking and human behavior recognition have been proposed by various researchers. But most of those do not have versatility and flexibility, and spend a lot of time and cost on building the tracking human behavior recognition system. Systems for tracking people have usually employed some form of background subtraction: Haritaoglu et al., 1998 and Haritaoglu et al., 1999 used grey level subtraction, Wren, Azarbayejani, Darrell, and Pentland (1995) modeled pixel color variation using multivariate Gaussians, and Gaussian mixtures have also been used in a similar manner (McKenna et al., 1999 and Stauffer and Grimson, 1999). The car tracking system by Koller, Weber, and Malik (1994) used an adaptive background model based on monochromatic images filtered with Gaussian and Gaussian derivative (vertical and horizontal) kernels. Background ‘subtraction’ using these filter outputs yielded results superior to the use of raw grey levels. A number of tracking algorithms for different applications have been presented. While these works present a wide range of different methods, they can be classified into two main categories of increasing complexity as follows: • Methods using full 3D modeling of human. • Methods using region 2D appearance model of human. 1.1. Methods using full 3D modeling of human Most of the work on tracking for visual surveillance is based on 3D modeling of change detection (Elgammal et al., 2003, Haritaoglu et al., 1998, Hongeng and Nevatia, 2001, Rosales and Sclaroff, 1999 and Stauffer and Grimson, 2000) or frame differencing if the camera is stationary. Additional stabilization is required if the camera is mobile (Tao, Sawhney, & Kumar, 2002). Some researches combine compact object shape, motion, and appearance in a Bayesian framework. However it does not explicitly handle occlusion of multiple objects since it was designed mainly for airborne video. Much work has been done on estimating human body postures in the context of video motion capture (a recent review is available in Moeslund and Granum (2001)). This problem is difficult, especially from a single view because 3D pose may be under constrained from one viewpoint. Most successful systems (e.g., Deutscher, Davison, & Reid, 2001) employ multiple viewpoints, good image resolution, and heavy computation, which is not always feasible for applications such as video surveillance. Use of constrained motion models can reduce the search space, but it only works on the type of motion defined in the model. Rohr (1994) describes pioneering work on motion recognition using motion captured data. In each frame, the joint angle values are searched for on the motion curves of a walking cycle. Results are shown only on an isolated human walking parallel to the image plane. Motion subspace is used in Sidenbladh, Black, and Fleet (2000) to track human walking using a particle filter. Recently, an approach has been proposed by Efros, Berg, Mori, and Malik (2003) to recognize actions. It is also based on flow-based motion description and temporal integration. 1.2. Methods using region 2D appearance model of human A variety of 2D appearance models tracking algorithms have been proposed and implemented. Tracking algorithms using 2D appearance models can be roughly classified into two categories: deterministic methods and stochastic methods. Deterministic methods typically track by performing an iterative search for the local maxima of a similarity cost function between the template image and the current image. The cost function widely used is the sum of squared differences (SSD) between the template and the current image such as in Baker and Matthews, 2004 and Hager and Belhumeur, 1998. More robust similarity measures have been applied and the mean-shift algorithm or other optimization techniques have been utilized to find the optimal solution (Collins, 2003 and Elgammal et al., 2003). Appearance-based approaches apply recognition algorithms to learn the objects either in some basis such as the eigenspace formed from observations or in kernel space (Black and Jepson, 1998 and Williams et al., 2003). On the other hand, the stochastic methods use the state space to model the underlying dynamics of the tracking system. In a linear-Gaussian model with linear measurement, there is always only one mode in the posterior probability density function (pdf), the Kalman filter propagates and updates the mean and covariance of the distribution. For nonlinear or non-Gaussian problems, it is impossible to evaluate the distributions analytically and many algorithms have been proposed to approximate them. Evolutionary technique has the versatility and flexibility that conventional study is a lack of. This method can greatly reduce the cost for building a surveillance system. This paper presents the evolutionary technique for extracting moving targets from a real-time video stream, robustly tracking them, and then classifying them into predefined categories according to activity properties. In order to detect questionable activities in public place such as airport, we will use the evolutionary technique to build an unusual human behavior (UHB) monitoring system.

In this paper, we presented a UHB (unusual human behavior) monitoring system using evolutionary technique. This system has strong advantages of robustness, computation of efficiency and accuracy. This system consists of human tracking and human behavior recognition. In addition, we proposed the object tracking algorithm which used color features, distance features and contour feature based on GA to measure the observation similarity. To increase the discriminative capacity to combine the three features, we adopted BP-based NN which results in highly discriminative observation likelihood. The above improvements made the tracking algorithm very efficient and robust against clutter, illumination changes and short period time occlusions. In the part of human behavior recognition, we extracted their trajectories, that is, the physical position of the human subjects over time. Generally, each human behavior type has a unique property – its unique trajectory pattern. That trajectory pattern can be used to classify the human behavior. The goal of this paper is to track each person in the image sequence and classify their behavior properties by analyzing their trajectory shape. NNs with Gaussian synapses based on hGA and a new algorithm for training them were applied to classify unusual human behavior by trajectory pattern. Multi-layer perceptron based on hGA using Gaussian synapse made the recognition algorithm very efficient and robust for classify human behavior by trajectory pattern. In the future research, we will consider more human features to improve the efficiency of the tracking algorithm. And we will define more types of unusual human behavior to perfect our UHB monitoring system.