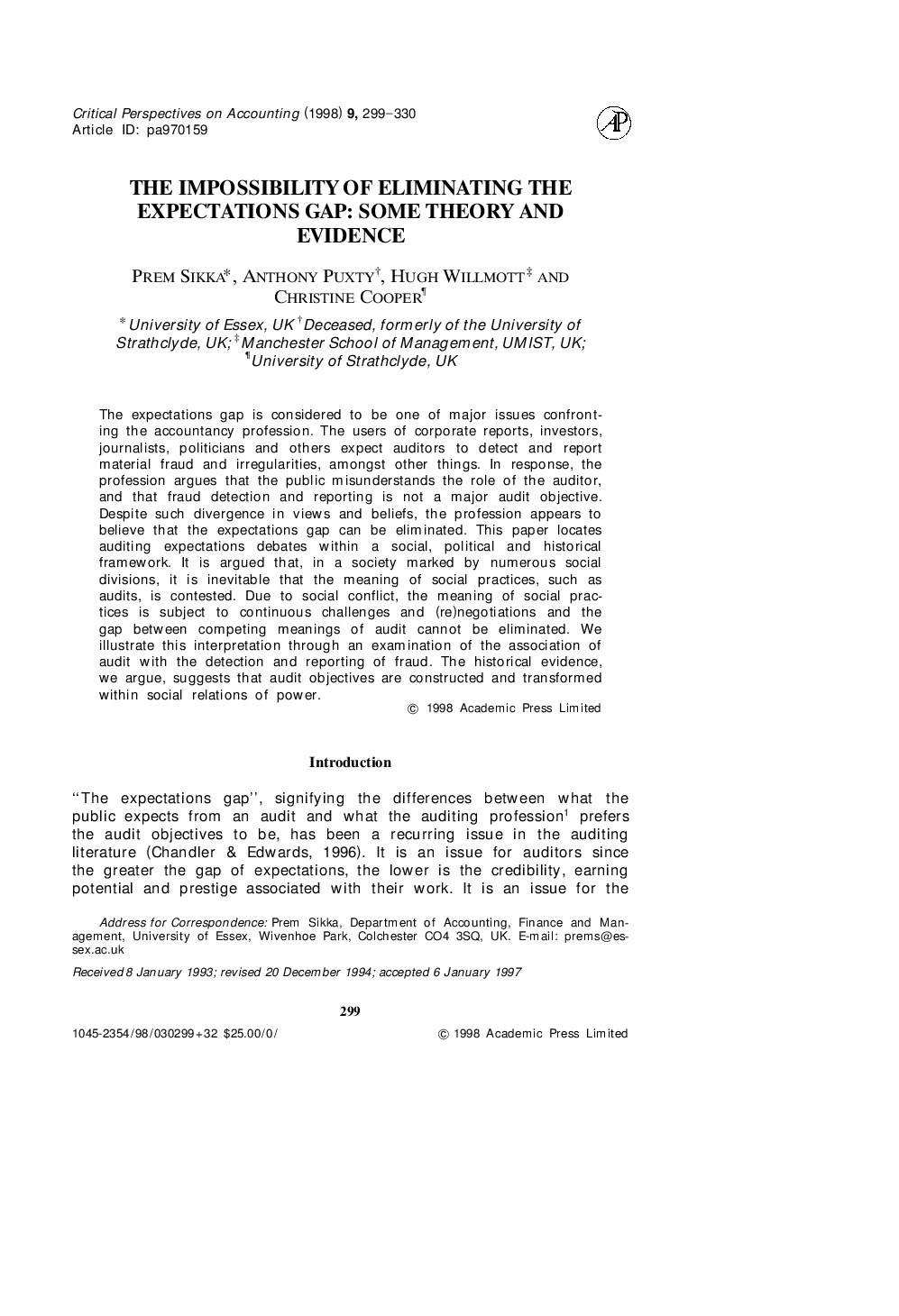 The expectations gap is considered to be one of major issues confronting the accountancy profession. The users of corporate reports, investors, journalists, politicians and others expect auditors to detect and report material fraud and irregularities, amongst other things. In response, the profession argues that the public misunderstands the role of the auditor, and that fraud detection and reporting is not a major audit objective. Despite such divergence in views and beliefs, the profession appears to believe that the expectations gap can be eliminated. This paper locates auditing expectations debates within a social, political and historical framework. It is argued that, in a society marked by numerous social divisions, it is inevitable that the meaning of social practices, such as audits, is contested. Due to social conflict, the meaning of social practices is subject to continuous challenges and (re)negotiations and the gap between competing meanings of audit cannot be eliminated. We illustrate this interpretation through an examination of the association of audit with the detection and reporting of fraud. The historical evidence, we argue, suggests that audit objectives are constructed and transformed within social relations of power.

The expectations gap’’, signifying the differences between what the public expects from an audit and what the auditing profession1.prefersthe audit objectives to be, has been a recurring issue in the auditing()literature Chandler & Edwards, 1996 . It is an issue for auditors since the greater the gap of expectations, the lower is the credibility, earning potential and prestige associated with their work. It is an issue for the public, investors and politicians because, in a capitalist economy, the process of wealth creation and political stability depends heavily uponconfidence in processes of accountability, of which an external audit of financial statements is considered to be an important part. Not surpris-ngly, ‘‘ the expectations gap’’ has attracted considerable institutional in(terest for example, American Institute of Certified Public Accountants,1978; Chartered Association of Certified Accountants, 1986a, 1986b; Canadian Institute of Chartered Accountants, 1988 as it is considered to be a threat to effective corporate governance The Committee on the Financial Aspects of Corporate Governance, 1992 and legitimacy of the institutions of auditing Auditing Practices Board, 1992, 1994a .In general, the academic literature on the expectations gap is quite fragmented see Gwilliam, 1987; Holt& Moizer, 1990; Gaa, 1991 and is relatively uninformed by any sustained appreciation of the broader his torical and political context in which expectations are formed, frustrated and transformed Willmott, 1991 . One major element of this body of literature relies upon questionnaires and opinion surveys to draw attention to the gap between the profession’s preferred meanings of audit and the public’s expectations see for example Lee, 1970; Beck, 1973; Arthur Andersen, 1974; Purewal & Sikka, 1977; Steen, 1990; Humphreyetal. 1992b, 1993a; Porter, 1993 . Another major element assumes that the meaning of audit is uncontested and fixed and that this can be deducedor is self-evident from a study of the contents of audit reports seeBaskin, 1972; Estes&Reimer, 1977; Firth, 1978, 1979; Alderman, 1979; Ballet al., 1979; Libby, 1979; Chow & Rice, 1982; Davis, 1982; Elliott, 1982; Estes, 1982; Houghton, 1983; Doddet al., 1984; Crasswell, 1985;Gul, 1987 . Such studies are founded upon the assumption that there is only one correct reading of the audit report and that this correct reading is identical to the values preferred by the profession. Associated with this assumption is the belief that the expectations gap would be substantially reduced, if not entirely eliminated, if only auditors’ intentions could be accurately transmitted to the users and regulators Auditing Practices Board, 1991; Hatherly & Skuse, 1991 .Of the remaining research and scholarship in this field, a few studies offer valuable contemporary commentary which shed light on the part played by the profession in sustaining and perpetuating the expectations()gap e.g. Humphreyet al., 1993b , but provide little conceptual guidance for understanding its persistence. A number of commentators have at-()tributed the gap to users’ confusion Lange, 1987; Marra & Radig, 1987 ,(widespread misunderstanding Baronet al., 1977; Campbell & Michenzi,1987; Krasnoff, 1987; Ellis & Selley, 1988; Auditing Practices Board,1991 , ignorance Singleton-Green, 1990a and / or lack of education()Cockburn, 1986; Amhowitz, 1987; Kirk, 1987; Singleton-Green, 1990b .Many more have uncritically accepted the definition of, and solution to,the problem favoured by the profession. Namely, that a deficient under-standing of auditing objectives amongst users that can, and must, be(remedied by educating users and other non-accountants Goldwasser,)1987; Milleretal.,1990 .

Overall, this study has advanced and illustrated the thesis that the meaning of audit cannot be fixed, while the elimination of the expectations gap requires that it should be. In a society marked by competing worldviews, contradictory institutional structures and an unequal distribution of power, wealth and influence, social practices are inherently un stable and the meaning of audit is subject to negotiation and transformation. Despite their self-regulating status, auditors are not in a sovereign position to determine or change the scope of their responsibilities. Even to preserve their limited powers of self-regulation and public confidence in their craft, auditors are obliged to be responsive albeit grudgingly to other voices that are in a strong position to scrutinise,question and contradict their claims. The principal difficulty encountered by those seeking to eliminate the expectations gap by marginalising or even excluding fraud detection as an audit objective has been the entrenched ‘‘common sense’’ views and experiences of many users of financial statements. Since auditors are understood and expected to pay meticulous attention to matters such as internal control, arithmetical accuracy of records, stock counts, cash counts, bank balances, creditorsdebtors, third party evidence and many other items, auditees and others continue to assume that auditors must necessarily be looking for fraud 39 and irregularities Purewal & Sikka, 1987 .It may be tempting to believe that the expectations gap could be narrowed, if not eliminated, through a statutory determination of the meaning of audits and auditor responsibilities. However, it is probable that challenges to legislation and institutionalised practices will continue.In the field of auditing, it is likely that opposition to the statutory association of audit with fraud detection, and revised auditor responsibilities, will continue to come from the auditing industry and its patrons if they perceive that it will have an adverse effect on their current methods of work, accountability, profits, liabilities and flexibilities. Legislation will no more be able to fix the meaning in any final sense of audits than it has been able to fix the meaning of ‘‘democracy’’, ‘‘ freedom’’,‘‘personal’’ or ‘‘sexual’’