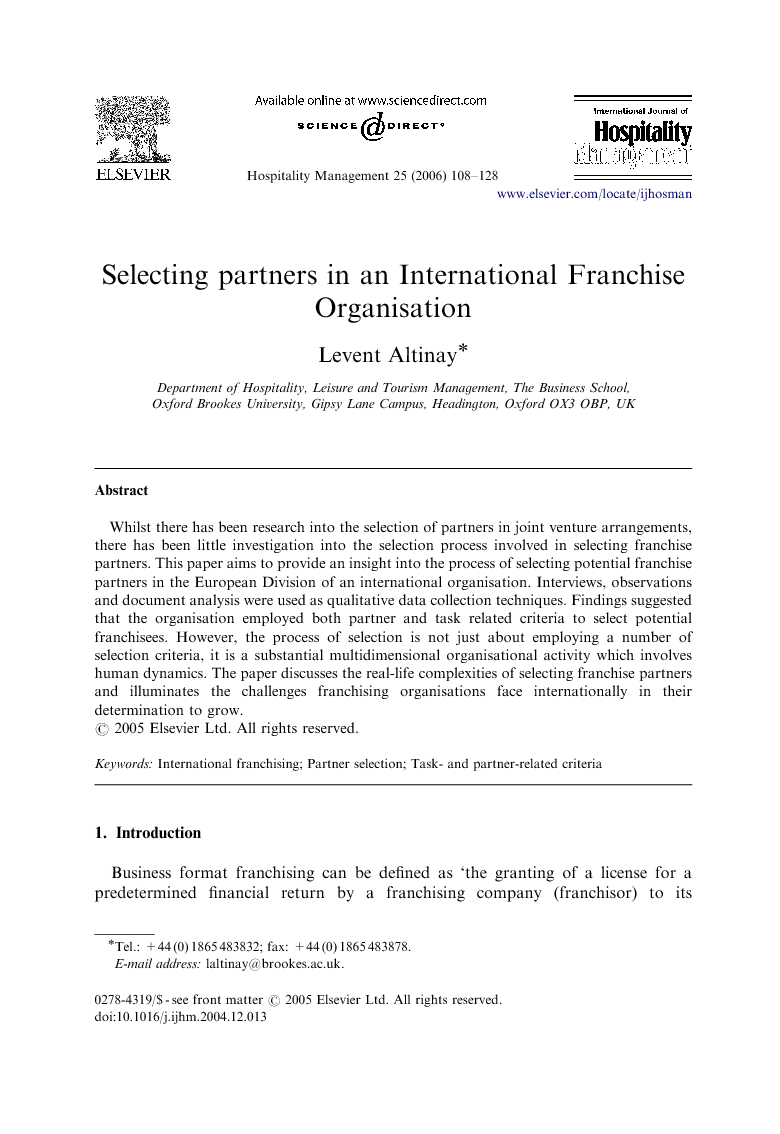 Whilst there has been research into the selection of partners in joint venture arrangements, there has been little investigation into the selection process involved in selecting franchise partners. This paper aims to provide an insight into the process of selecting potential franchise partners in the European Division of an international organisation. Interviews, observations and document analysis were used as qualitative data collection techniques. Findings suggested that the organisation employed both partner and task related criteria to select potential franchisees. However, the process of selection is not just about employing a number of selection criteria, it is a substantial multidimensional organisational activity which involves human dynamics. The paper discusses the real-life complexities of selecting franchise partners and illuminates the challenges franchising organisations face internationally in their determination to grow.

Business format franchising can be defined as ‘the granting of a license for a predetermined financial return by a franchising company (franchisor) to its franchisees, entitling them to make use of a complete business package, including training, support and the corporate name, thus enabling them to operate their own businesses to exactly the same standards and format as the other units in the franchised chain’ (Grant, 1985, p. 5). Originating in the USA, franchising emerged as a powerful new way of facilitating the growth of service organisations. Ingram (2001) states that the trend towards more franchised outlets seems set to continue around the world not least in hotels, restaurants and pubs. Lashley and Morrison (2000) also pointed out that business format franchising has become an established global enterprise trend within the service sector, in general, and specifically within the hospitality services sector. These two authors indicated that franchising has become a mature industry in the United States and well established in the UK and in the preface of their edited book, they recognised the growing significance of this business format. These authors showed forecasts that the number of UK franchised units will double from 66,670 in 2000 to 121,963 in 2002. In year 2000, the estimated number of franchised locations in the US is more than 320,000 in 75 industries accounting for $1 trillion in annual US retail sales. That is more than 40% of total sales. It is also estimated that franchising employs more than 8 million people in the US (New Business Centre, 2002). International franchising, gives those industries and organisations whose products cannot be exported (such as services) an opportunity for market expansion. From a business perspective, it involves less risk than some other means of internationalisation, notably direct investment (Aydin and Kacker, 1990). Although franchising is expanding faster and more vigorously than other forms with intensifying competition both domestically and internationally (Castrogiovanni and Justis, 1998), the internationalisation of franchise systems is under-researched (Quinn and Doherty, 2000). Several authors have proposed theoretical frameworks for investigation of the international franchising phenomenon (See Eroglu, 1992 and Karuppur and Sashi, 1992). Each of these investigations, whether descriptive or theoretical, conceptual or empirical, raises the basic question of how different international franchisors select and recruit franchise partners in different country markets. Little is still known about what happens after the decision has been made for an international expansion of franchise activities and to use a certain co-operative venture. The decision-making criteria used to select and recruit franchise partners particularly needs to be investigated because although the international collaborations have become increasingly important, many of them result in dissolution leading to adverse monetary and strategic effects because of the failure of organisations to select the ‘right’ partner (Madhok and Tallman, 1998). This paper aims to contribute to the filling of these gaps by presenting the empirical findings related to the decision-making criteria used in the process of identifying franchising opportunities and selecting franchise partners in different country markets. This paper particularly seeks to address the influence of cultural differences on the franchisee selection decision-making process, which, it is hoped, will both illuminate the challenges franchise organisations face internationally and highlight the options that companies may consider as part of their growth strategies. The paper begins by reviewing the literature around the concepts of international franchising and partner selection. It then describes the research process. The findings are then discussed by means of two underlying themes with regard to the franchisee selection process—first prospective partner identification in different country markets and, second, screening and selecting these partners in the organisation. Finally, conclusions are drawn about the franchisee recruitment process and the selection criteria utilised, particularly in foreign markets.