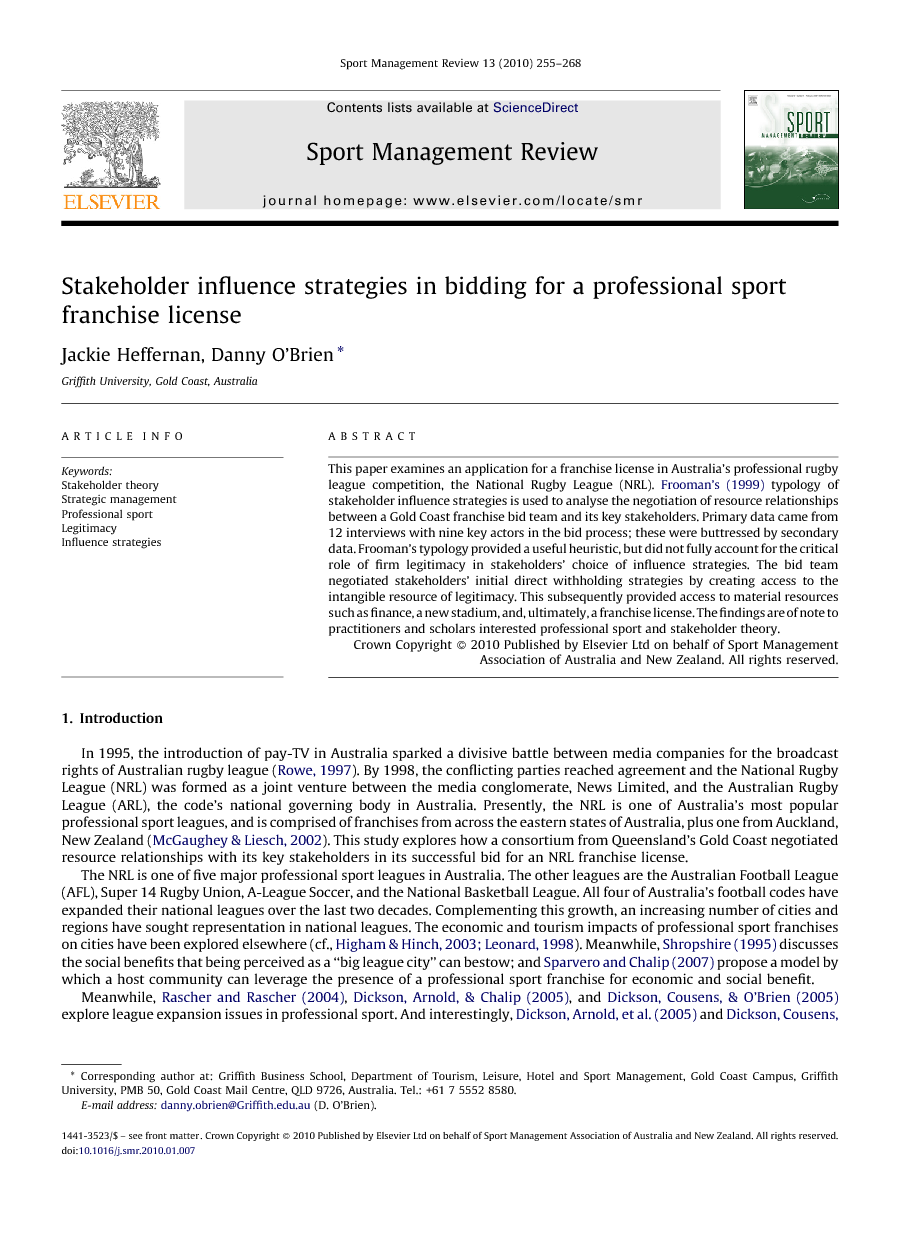 This paper examines an application for a franchise license in Australia's professional rugby league competition, the National Rugby League (NRL). Frooman's (1999) typology of stakeholder influence strategies is used to analyse the negotiation of resource relationships between a Gold Coast franchise bid team and its key stakeholders. Primary data came from 12 interviews with nine key actors in the bid process; these were buttressed by secondary data. Frooman's typology provided a useful heuristic, but did not fully account for the critical role of firm legitimacy in stakeholders’ choice of influence strategies. The bid team negotiated stakeholders’ initial direct withholding strategies by creating access to the intangible resource of legitimacy. This subsequently provided access to material resources such as finance, a new stadium, and, ultimately, a franchise license. The findings are of note to practitioners and scholars interested professional sport and stakeholder theory.

In 1995, the introduction of pay-TV in Australia sparked a divisive battle between media companies for the broadcast rights of Australian rugby league (Rowe, 1997). By 1998, the conflicting parties reached agreement and the National Rugby League (NRL) was formed as a joint venture between the media conglomerate, News Limited, and the Australian Rugby League (ARL), the code's national governing body in Australia. Presently, the NRL is one of Australia's most popular professional sport leagues, and is comprised of franchises from across the eastern states of Australia, plus one from Auckland, New Zealand (McGaughey & Liesch, 2002). This study explores how a consortium from Queensland's Gold Coast negotiated resource relationships with its key stakeholders in its successful bid for an NRL franchise license. The NRL is one of five major professional sport leagues in Australia. The other leagues are the Australian Football League (AFL), Super 14 Rugby Union, A-League Soccer, and the National Basketball League. All four of Australia's football codes have expanded their national leagues over the last two decades. Complementing this growth, an increasing number of cities and regions have sought representation in national leagues. The economic and tourism impacts of professional sport franchises on cities have been explored elsewhere (cf., Higham and Hinch, 2003 and Leonard, 1998). Meanwhile, Shropshire (1995) discusses the social benefits that being perceived as a “big league city” can bestow; and Sparvero and Chalip (2007) propose a model by which a host community can leverage the presence of a professional sport franchise for economic and social benefit. Meanwhile, Rascher and Rascher (2004), Dickson, Arnold, & Chalip (2005), and Dickson, Cousens, & O’Brien (2005) explore league expansion issues in professional sport. And interestingly, Dickson, Arnold, et al. (2005) and Dickson, Cousens, et al. (2005) examine the expansion of the Victorian Football League (VFL) in the 1980s. The authors address the nature of interorganisational power relationships between the league's governing body and clubs seeking to join the league—the VFL's key stakeholders during the expansion process. The term “stakeholder” refers to, “any group or individual who can affect or is affected by the achievement of organizational objectives” (Freeman, 1984, p. 25). This somewhat broad definition has since been refined. Clarkson (1995) distinguishes a primary stakeholder as, “one without whose continuing participation the corporation cannot survive as a going concern” (p. 106). Thus, a consortium seeking inclusion in a professional sport league, referred to in this study as a “franchise bid team,” is dependent on primary stakeholders for the resources it needs to achieve entry into the focal league. This resource dependency suggests the influence of power relationships in the franchise bid process. In this context, power is, “structurally determined in the sense that the nature of the relationship – that is, who is dependent on whom and how much – determines who has power” (Frooman, 1999, p. 196). From this perspective, power is thought of as a characteristic of the relationship between actors, not as a trait of the actors themselves (Frooman, 1999). Researchers such as Clarkson (1995) and Mitchell, Agle, & Wood (1997) examine power within stakeholder relationships. However, like Freeman's (1984) seminal work, most stakeholder research addresses managerial behaviour taken in response to stakeholders, rather than the behaviours of the stakeholders themselves. This prompted Frooman (1999) to propose a working heuristic to address stakeholders’ strategic behaviours, rather than the firm's. He argues that, knowing how stakeholders may try to influence a firm is critical knowledge for any manager. After all, for managers to act strategically and plan their actions…presupposes that they have some idea of how others in their environment will act (Frooman, 1999, p. 203). Therefore, Frooman (1999) proposes a typology of stakeholder influence strategies, which forms the core of this study's theoretical underpinnings. The study's purpose was to understand the negotiation of resource relationships between a professional sport franchise bid team and its key stakeholders. In so doing, the study places stakeholder theory in a specific and under-researched context—professional sports league expansion. This makes a contribution to stakeholder theory, and builds on the work of Dickson, Arnold, et al. (2005) and Dickson, Cousens, et al. (2005). In the next section, the study's research context is presented.