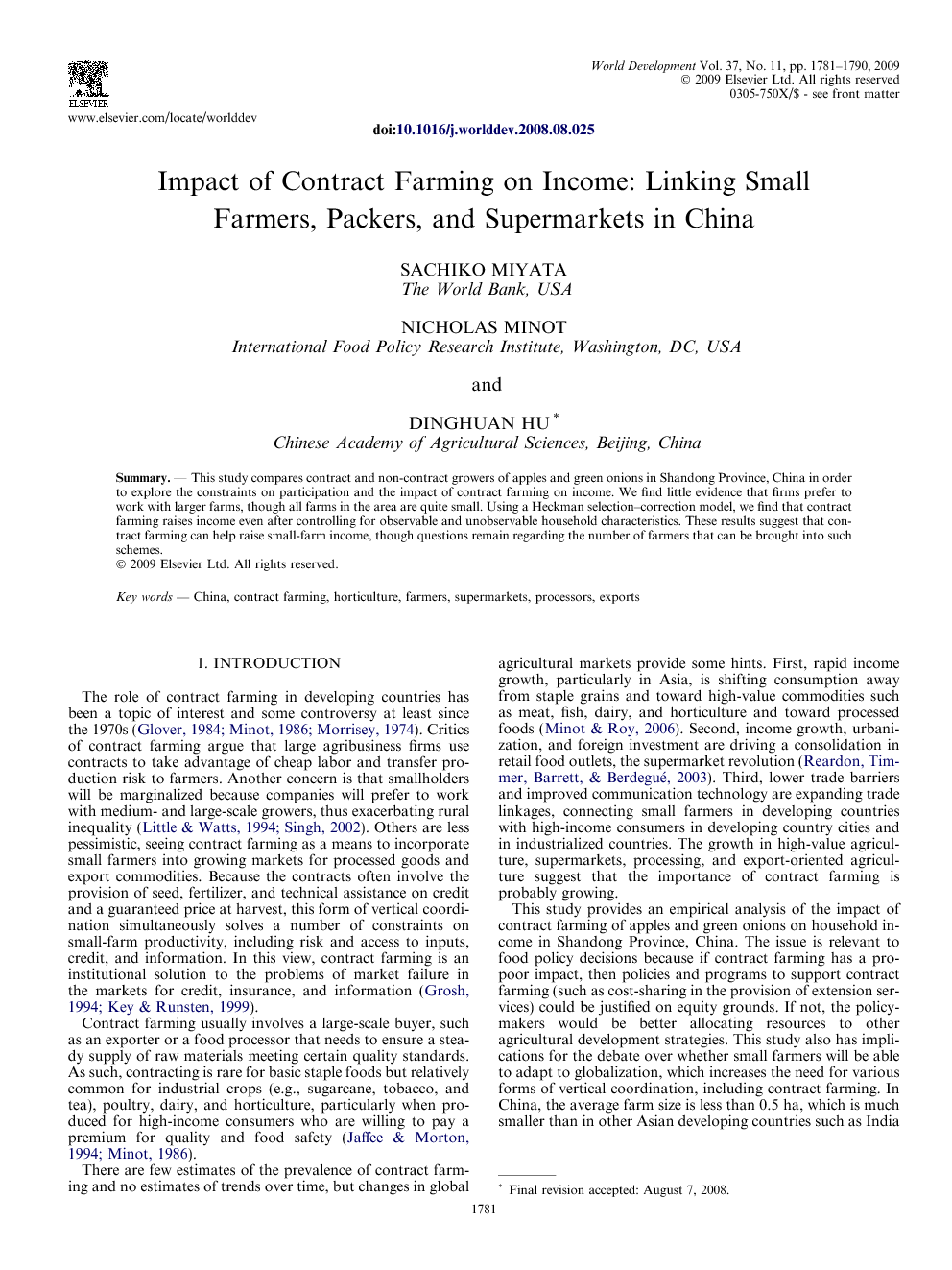 This study compares contract and non-contract growers of apples and green onions in Shandong Province, China in order to explore the constraints on participation and the impact of contract farming on income. We find little evidence that firms prefer to work with larger farms, though all farms in the area are quite small. Using a Heckman selection–correction model, we find that contract farming raises income even after controlling for observable and unobservable household characteristics. These results suggest that contract farming can help raise small-farm income, though questions remain regarding the number of farmers that can be brought into such schemes.

The role of contract farming in developing countries has been a topic of interest and some controversy at least since the 1970s (Glover, 1984, Minot, 1986 and Morrisey, 1974). Critics of contract farming argue that large agribusiness firms use contracts to take advantage of cheap labor and transfer production risk to farmers. Another concern is that smallholders will be marginalized because companies will prefer to work with medium- and large-scale growers, thus exacerbating rural inequality (Little and Watts, 1994 and Singh, 2002). Others are less pessimistic, seeing contract farming as a means to incorporate small farmers into growing markets for processed goods and export commodities. Because the contracts often involve the provision of seed, fertilizer, and technical assistance on credit and a guaranteed price at harvest, this form of vertical coordination simultaneously solves a number of constraints on small-farm productivity, including risk and access to inputs, credit, and information. In this view, contract farming is an institutional solution to the problems of market failure in the markets for credit, insurance, and information (Grosh, 1994 and Key and Runsten, 1999). Contract farming usually involves a large-scale buyer, such as an exporter or a food processor that needs to ensure a steady supply of raw materials meeting certain quality standards. As such, contracting is rare for basic staple foods but relatively common for industrial crops (e.g., sugarcane, tobacco, and tea), poultry, dairy, and horticulture, particularly when produced for high-income consumers who are willing to pay a premium for quality and food safety (Jaffee and Morton, 1994 and Minot, 1986). There are few estimates of the prevalence of contract farming and no estimates of trends over time, but changes in global agricultural markets provide some hints. First, rapid income growth, particularly in Asia, is shifting consumption away from staple grains and toward high-value commodities such as meat, fish, dairy, and horticulture and toward processed foods (Minot & Roy, 2006). Second, income growth, urbanization, and foreign investment are driving a consolidation in retail food outlets, the supermarket revolution (Reardon, Timmer, Barrett, & Berdegué, 2003). Third, lower trade barriers and improved communication technology are expanding trade linkages, connecting small farmers in developing countries with high-income consumers in developing country cities and in industrialized countries. The growth in high-value agriculture, supermarkets, processing, and export-oriented agriculture suggest that the importance of contract farming is probably growing. This study provides an empirical analysis of the impact of contract farming of apples and green onions on household income in Shandong Province, China. The issue is relevant to food policy decisions because if contract farming has a pro-poor impact, then policies and programs to support contract farming (such as cost-sharing in the provision of extension services) could be justified on equity grounds. If not, the policymakers would be better allocating resources to other agricultural development strategies. This study also has implications for the debate over whether small farmers will be able to adapt to globalization, which increases the need for various forms of vertical coordination, including contract farming. In China, the average farm size is less than 0.5 ha, which is much smaller than in other Asian developing countries such as India (1.5 ha), Thailand (3.4 ha), and South Korea (1.5 ha) (Fan & Chan-Kang, 2005). More specifically, this paper addresses three related questions. First, to what degree do less educated and small-scale farmers participate in contract farming schemes? Second, does contract farming raise the income of participating farmers? Third, if contract farming raises income, how does it do so, through lower input prices, higher yields, better crop prices, or some other mechanism? In Section 2, we review previous research that evaluates the distributional effect of contract farming schemes. Section 3 describes the farm survey data and the econometric methods used in this study. Section 4 provides the results in three parts: a description of the contract farming schemes, a comparison of contract and non-contract farmers, and an econometric analysis of contract participation and income. Section 5 provides some concluding comments and policy implications.

In summarizing the results of this study, we return to the three questions posed in the introduction. First, to what degree are small-scale and less educated farmers able to participate in contract farming? The probit analysis of our farm survey of apple and green onion growers in Shandong Province, China, suggest that there is some selection (or self-selection) of contract farmers but it is by location (proximity to the village head) and by labor availability rather than by farm size or level of education. Thus, there does not seem to be a bias toward larger farmers in these contract farming schemes. However, it should be noted that even “large” farms in the sample are relatively small. Furthermore, the results suggest that contract farmers tend to have more agricultural assets than non-contract farmers, but our analysis does not allow us to determine whether this is a cause or an effect of contract farming. Second, does contract farming raise the incomes of farmers? Our results suggest that contract farmers earn more than their neighbors growing the same crops even after controlling for household labor availability, education, farm size, share of land irrigated, and proximity to the village leader. Furthermore, the treatment effect regression model suggests that there is no selection bias caused by unobserved differences between contract and non-contract farmers such as industriousness or intelligence. Finally, direct questions to contract farmers revealed that three-quarters of them perceived an increase in income since they began contracting. Third, what explains the income differences between contract and non-contract farmers? In the case of apple growers, contract farmers benefit from higher yields, presumably due to the technical assistance and specialized inputs provided by the packers. In contrast, the yields of contract green onion growers are no larger than those of independent green onion growers, but the prices contract farmers receive from the packers are higher. Although their per-unit input costs are also higher, the higher price more than compensates for this, resulting in higher gross margins. It is likely that these higher prices received by contract growers reflect the higher quality made possible by the contract relationship. On the other hand, it is important to recognize that Shandong Province enjoys good soils and adequate rainfall, as well a major port and proximity to the Japanese and South Korean markets. As a result, Shandong is one of the more prosperous provinces in China with an advanced, commercially-oriented agricultural sector. The two crops considered in this study, apples and green onions, are perishable, high-value commodities, and thus more likely to require the vertical coordination that contract farming provides. Furthermore, only some of the apple and green onion production is contracted, specifically the portion to be supplied to upscale domestic markets (e.g., supermarket chains) and export markets. International experience suggests that contract farming much less likely to be viable for farmers growing staple foods or horticultural crops for local consumption. By extension, contract farming is likely to have more limited application in western China, which is poorer, drier, and more distant from potential markets. One implication of these results is that public policy should support the establishment and maintenance of contract farming, particularly where it involves small-scale farmers. This support could take the form of establishing a clear legal framework for contracts between farmers and agribusiness firms, helping firms identify potential contract farmers, allowing extension agents to provide technical assistance under the guidance of the firm, and mediating conflicts between farmers and buyers. Chinese agricultural policy already provides some incentives for contract production, establishing conditions under which contracting firms can be certified as “Dragon head” companies to benefit from tax concessions or access to preferential loans (Gale & Collender, 2006). All four of the packers interviewed for this study have been designated “Dragon head” companies. However, it is important for policymakers to be realistic about the potential scope of contract farming. Because of the costs associated with contracting, it tends to be limited to high-value commodities (including meat, milk, fish, fruits, vegetables, and cash crops) being grown for processors and exporters who sell into a quality-sensitive market. Thus, policymakers should not think of contract farming as a solution to the problems of credit, information, and market access for all small farmers in developing countries. Contract farming can be very effective in raising small-farm income, but it is only applicable in certain circumstances.