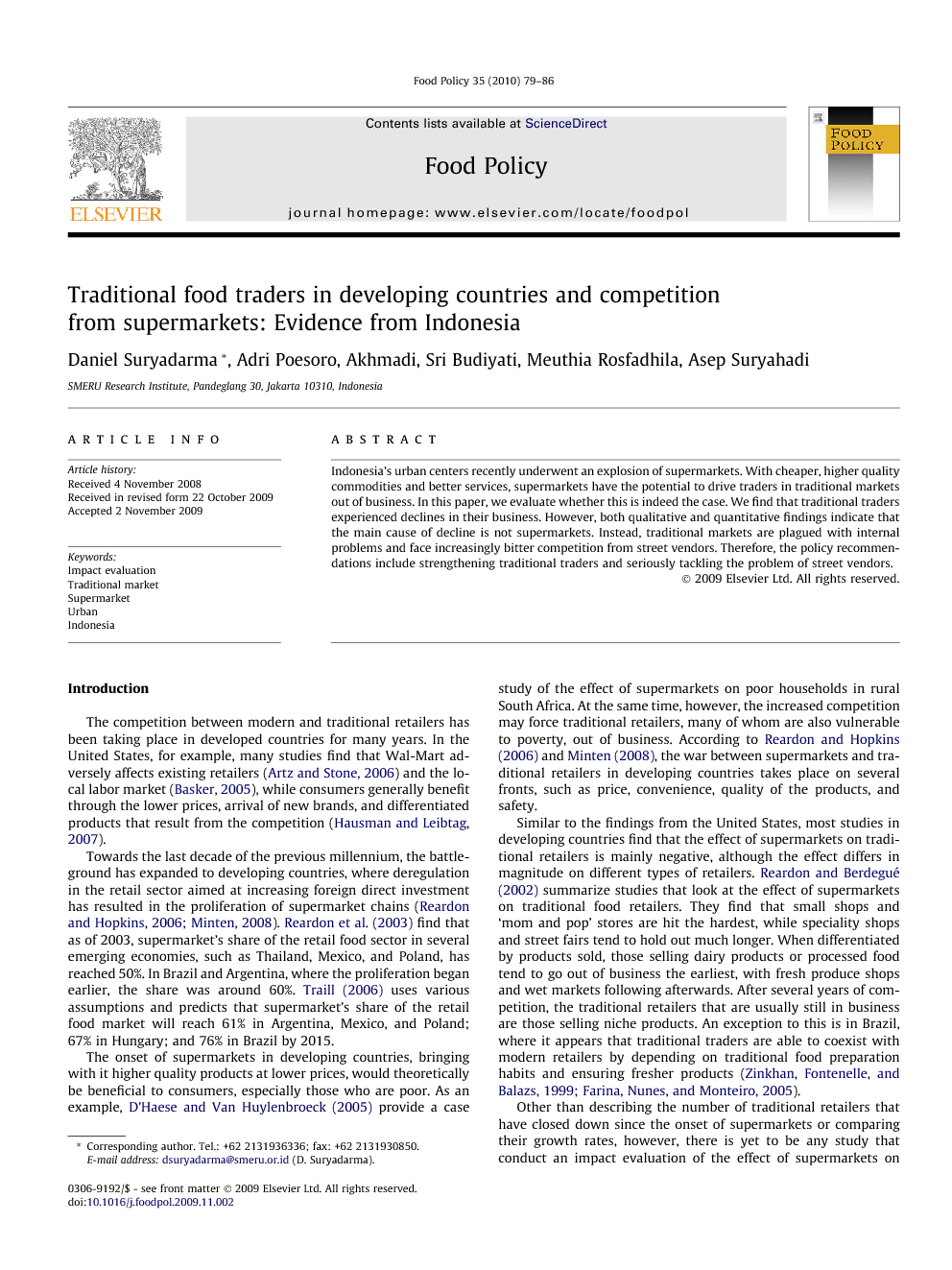 Indonesia’s urban centers recently underwent an explosion of supermarkets. With cheaper, higher quality commodities and better services, supermarkets have the potential to drive traders in traditional markets out of business. In this paper, we evaluate whether this is indeed the case. We find that traditional traders experienced declines in their business. However, both qualitative and quantitative findings indicate that the main cause of decline is not supermarkets. Instead, traditional markets are plagued with internal problems and face increasingly bitter competition from street vendors. Therefore, the policy recommendations include strengthening traditional traders and seriously tackling the problem of street vendors.

Supermarkets have been around in major urban centers in Indonesia for the last three decades. At the onset of the liberalization of the retail sector in 1998, however, foreign supermarket operators began entering the country, sparking a fierce competition with local operators. Some corners claim that traditional markets are the real victims of the intense competition, as they lose their customers due to the cheaper and higher quality products and the more comfortable shopping environment that supermarkets provide. Therefore, there are calls to limit the construction of supermarkets, especially in locations near traditional markets. This study investigates the impact of supermarkets on traditional market traders in Indonesia’s urban centers. Five traditional markets were chosen as the treatment group and two traditional markets were chosen as the control group. The sampling frame ensures that these markets are representative of traditional markets in urban areas in Indonesia. Furthermore, it also ensures that the treatment and control groups have similar characteristics other than their proximity to supermarkets. Two treatment markets and one control market are located in Depok, an urban center near Jakarta, while the rest are located in the Greater Bandung area, the capital of West Java Province. Randomly selected traders in these markets were interviewed using a questionnaire. These traders are representative of the traditional markets. On average, traders in both treatment and control markets have experienced a decline in their business over the past 3 years. The quantitative impact analysis finds no statistically significant impact of supermarket on the profit and revenue of traditional traders. These results are further confirmed by the qualitative analysis findings that supermarkets are not the main cause of the decline among traditional markets. The traders, market managers, and traders’ representatives all state that the main steps which should be undertaken to ensure their survival are the improvement of traditional market infrastructure, organization of the street vendors, and the implementation of better market management practices. The traders explicitly state their confidence that supermarkets would not drive them out of business if the above conditions were met. While there is indeed evidence that traders have gone out of business during the last 3 years, the reasons for this are more complex than the entry of supermarkets alone. Most business closures are associated with internal market and personal problems. In addition, traders who mainly sell to non-households and have maintained a good relationship with their customers over a long period of time are more likely to stay in business. Therefore, policy recommendations to ensure a thriving traditional market environment evolve around increasing the competitiveness of the traditional market. This involves several steps. First, the local government should improve the infrastructure in the traditional markets. This includes ensuring proper hygiene, sufficient cleanliness, ample lighting, and an overall comfortable environment. This also entails appointing qualified people as market managers and giving them enough authority to make decisions. Furthermore, the market manager should consistently coordinate with traders in order to achieve better market management. Secondly, local governments should organize the street vendors, either by providing them with kiosks inside the traditional markets or by enforcing the law banning them from opening stalls around a traditional market. It is imperative that these vendors are kept from blocking the market entrance. The third recommendation pertains to the traders themselves. Most traders have no option but to pay their suppliers with cash and use their own capital for the business. On one hand, this poses a constraint for business expansion. On the other hand, it means that traders have to undertake all the risks associated with doing business. Given that the traders do not usually insure their businesses, they are vulnerable to even a small shock. It is therefore worth investigating the types of insurance suitable for traders and assisting them should they need additional capital to finance their expansion.