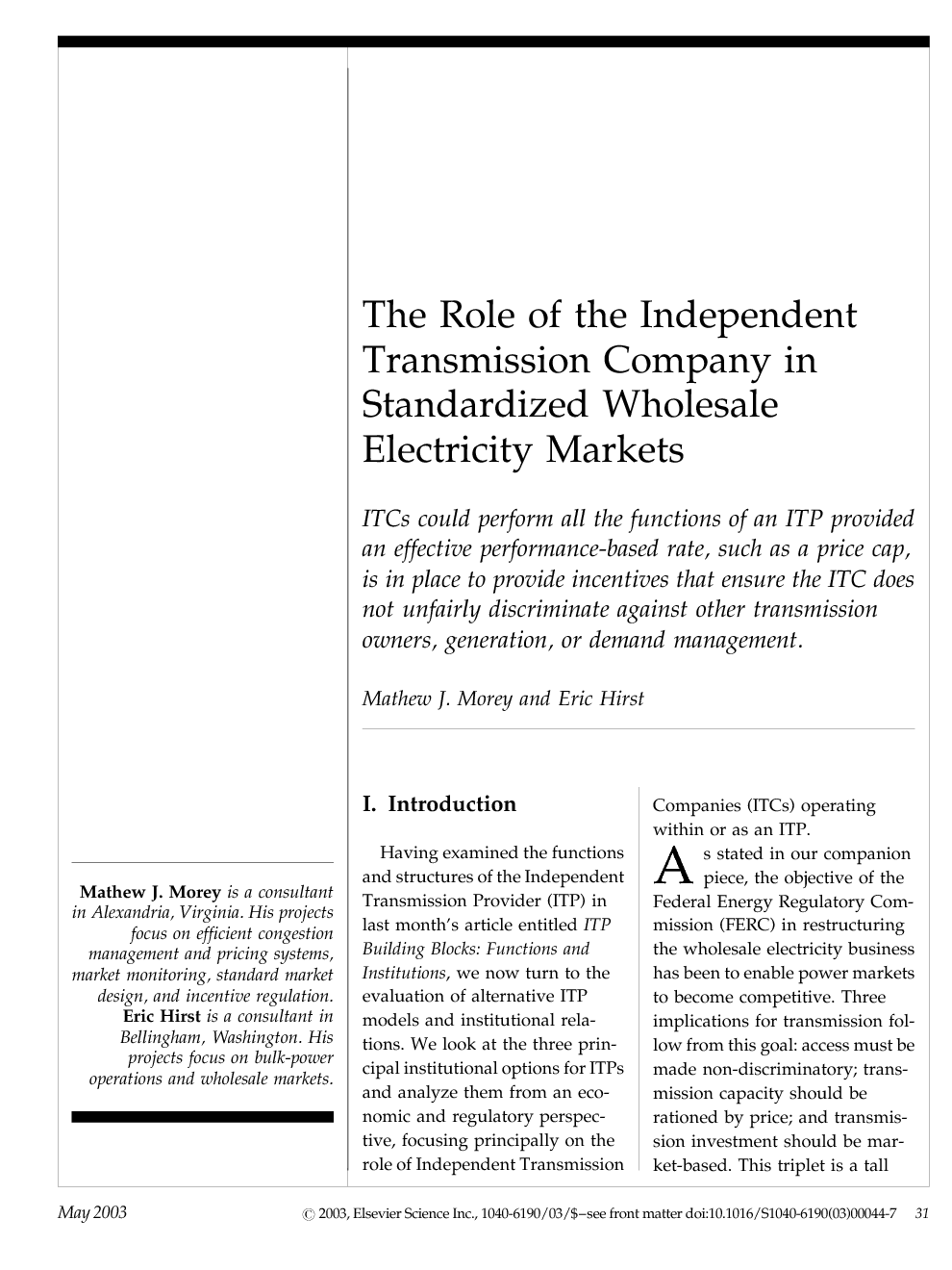 ITCs could perform all the functions of an ITP provided an effective performance-based rate, such as a price cap, is in place to provide incentives that ensure the ITC does not unfairly discriminate against other transmission owners, generation, or demand management.

Having examined the functions and structures of the Independent Transmission Provider (ITP) in last month’s article entitled ITP Building Blocks: Functions and Institutions, we now turn to the evaluation of alternative ITP models and institutional relations. We look at the three principal institutional options for ITPs and analyze them from an economic and regulatory perspective, focusing principally on the role of Independent Transmission Companies (ITCs) operating within or as an ITP. As stated in our companion piece, the objective of the Federal Energy Regulatory Commission (FERC) in restructuring the wholesale electricity business has been to enable power markets to become competitive. Three implications for transmission follow from this goal: access must be made non-discriminatory; transmission capacity should be rationed by price; and transmission investment should be market-based. This triplet is a tall order to fill because of the grid’s singular role in electricity markets and the grid’s physical attributes that erode the effectiveness of market-based investment policy. Furthermore, transmission service will remain a monopoly for the foreseeable future, which means that transmission prices must be regulated. In theory, non-discrimination is achievable by placing responsibility for monopoly transmission functions in the hands of an agent with no interest in generation, distribution, and marketing, an Independent Transmission Provider (ITP).1 Given that the real-time spot market and real-time dispatch of demand and supply resources are one and the same, it also makes sense to place the administration of the spot market (real-time market for certain, and day-ahead markets most likely) in the hands of an ITP. Then the ITP can ration transmission capacity to those who value it most highly through prices for transmission use founded upon market-based locational marginal electricity prices. Market-based pricing of transmission use then becomes the foundation for market-driven investment in the grid when it is economical to do so. In the proposed Standard Market Design, the Commission aims to achieve these goals by requiring all jurisdictional transmission-owning utilities to turn over control of their assets to an ITP. The ITP would be responsible for running day-ahead and real-time energy markets according to a clear-cut template, for allocating (i.e., selling) rights to the use of scarce transmission capacity and for coordinating and directing the transmission planning and expansion process.2 The critical question for those companies keen on participating in the transmission business is posed in the SMD Notice of Proposed Rulemaking (NOPR): can a for-profit ITC3 be considered sufficiently independent of the market (i.e., market neutral) to qualify as an ITP? Three factors play prominently in whether ITCs would be allowed to assume full functionality as ITPs: the ITC’s scope and configuration, its independence of market participants, and the form of price regulation adopted. Significant consolidation of regional transmission assets under an ITC’s control may be necessary before one will be considered large enough to satisfy the Order 2000 scope criterion. However, ITCs could perform all the functions of an ITP if a well-designed performance-based regulation (PBR) plan is in place. Such a PBR must provide the correct incentives (to avoid unintended side effects) that ensure the ITC does not unfairly discriminate against other transmission owners, generation, or demand management. This is a tall order, and there is no such PBR experience in the United States for ITCs. The experience in the United Kingdom and elsewhere should point ITCs and regulators in the right direction. ITCs that seek ITP approval from FERC (e.g., those that adopt the original Transco model) must therefore develop and present a workable PBR that addresses the concerns of those who favor an ISO-centered ITP. The remainder of this article is organized as follows. Section II covers the pros and cons of greater roles for ITCs within an ITP and SMD framework. Section III discusses the prerequisites for ITCs to play expansive roles as ITPs in regional wholesale markets. Section IV outlines ITC functionalities as ITPs under the SMD and as players within an ITP footprint. Section V offers our conclusions.