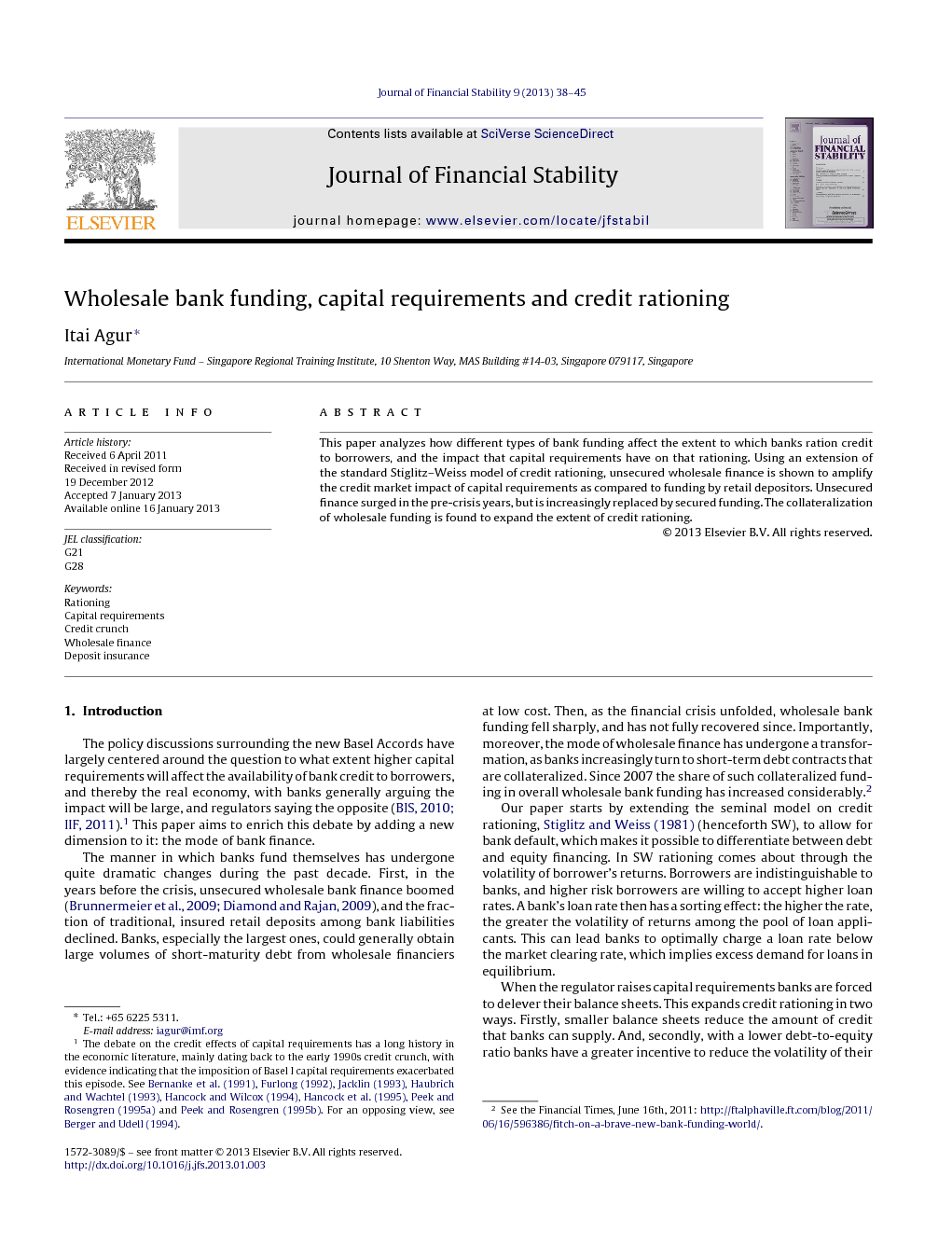 This paper analyzes how different types of bank funding affect the extent to which banks ration credit to borrowers, and the impact that capital requirements have on that rationing. Using an extension of the standard Stiglitz–Weiss model of credit rationing, unsecured wholesale finance is shown to amplify the credit market impact of capital requirements as compared to funding by retail depositors. Unsecured finance surged in the pre-crisis years, but is increasingly replaced by secured funding. The collateralization of wholesale funding is found to expand the extent of credit rationing.

The policy discussions surrounding the new Basel Accords have largely centered around the question to what extent higher capital requirements will affect the availability of bank credit to borrowers, and thereby the real economy, with banks generally arguing the impact will be large, and regulators saying the opposite (BIS, 2010 and IIF, 2011).1 This paper aims to enrich this debate by adding a new dimension to it: the mode of bank finance. The manner in which banks fund themselves has undergone quite dramatic changes during the past decade. First, in the years before the crisis, unsecured wholesale bank finance boomed (Brunnermeier et al., 2009 and Diamond and Rajan, 2009), and the fraction of traditional, insured retail deposits among bank liabilities declined. Banks, especially the largest ones, could generally obtain large volumes of short-maturity debt from wholesale financiers at low cost. Then, as the financial crisis unfolded, wholesale bank funding fell sharply, and has not fully recovered since. Importantly, moreover, the mode of wholesale finance has undergone a transformation, as banks increasingly turn to short-term debt contracts that are collateralized. Since 2007 the share of such collateralized funding in overall wholesale bank funding has increased considerably.2 Our paper starts by extending the seminal model on credit rationing, Stiglitz and Weiss (1981) (henceforth SW), to allow for bank default, which makes it possible to differentiate between debt and equity financing. In SW rationing comes about through the volatility of borrower's returns. Borrowers are indistinguishable to banks, and higher risk borrowers are willing to accept higher loan rates. A bank's loan rate then has a sorting effect: the higher the rate, the greater the volatility of returns among the pool of loan applicants. This can lead banks to optimally charge a loan rate below the market clearing rate, which implies excess demand for loans in equilibrium. When the regulator raises capital requirements banks are forced to delever their balance sheets. This expands credit rationing in two ways. Firstly, smaller balance sheets reduce the amount of credit that banks can supply. And, secondly, with a lower debt-to-equity ratio banks have a greater incentive to reduce the volatility of their asset portfolio. They are willing to give up more returns on successful loans in order to improve on the composition of loan applicants. Therefore, they lower loan rates, which increases credit demand. With fewer loans supplied and more demanded, credit rationing rises.3 We next introduce different types of bank debt. We consider in turn deposit-insured retail funding, unsecured wholesale funding and collateralized wholesale funding, in each case assuming that the bank's debt consists entirely of that one given type of funding. Our first main result is that with unsecured wholesale funding the impact of capital requirements is larger than with retail funding. That is, although higher capital requirements always cause a rise in the incidence of credit rationing, this effect is greater when banks are funded at wholesale. The reason is that when banks are wholesale funded their funding rates and loan rates interact. Insured depositors do not care about how risky a bank is, because they are certain to get back their money if it fails. But unsecured financiers demand higher funding rates when a bank pursues a riskier (higher loan rate) strategy. When due to higher capital requirements a bank internalizes more of its risk, and reduces loan rates, its wholesale funding rates fall, which further raises the bank's charter value, and make it more risk-averse, amplifying the effect on credit rationing. Our second main result is that when banks move from unsecured to secured wholesale funding, more borrowers get credit rationed. The reason is, firstly, that banks reduce lending to borrowers as they need to place more of their portfolio in safe collateral. Secondly, there is a direct effect on the bank's risk taking incentives: the collateral that it puts up makes it more averse to adverse selection problems. And thirdly, there is an indirect effect that runs through the financiers, who demand lower funding rates when covered by collateral, which interacts with bank loan rates in the manner described before. Of course, generally a bank is not funded using only one type of funding. Rather, it accesses various forms of funding simultaneously. In an extension we analyze mixed finance banks, focussing on retail and unsecured wholesale. The outcome is a direct extension of the results on one-type finance banking, namely that a larger share of wholesale finance amplifies the impact of capital requirements. It is important to note that the analysis in this paper is purely positive, not normative. We do not take a stance on the welfare effects of credit rationing, and instead purely focus on how the extent of rationing – the gap between credit demand and credit supply – is affected. Hence, we do not say that some form of bank financing is better or worse because of its effects on credit rationing. Rather, the aim of the paper is to help foster an understanding of how credit market reactions to capital requirements differ according to bank financing forms. The closest relative to this paper is that of Thakor (1996), who develops a borrower screening mechanism through which capital requirements are related to credit rationing. In his model banks choose the probability with which they screen a loan applicant. When capital requirements rise, banks face a higher cost of loan-funding. In response, all banks reduce the probability with which they screen applicants and thus more potential borrowers get rationed. Thakor (1996) does not consider different bank funding modes. The next section introduces the basic model of credit rationing. Sections 3, 4 and 5 consider retail, unsecured wholesale and secured wholesale finance, respectively. Section 6 analyzes mixed funding. Finally, Section 7 concludes.

Over the past decade bank funding has gone through many transitions. In the years before the crisis the broadening of wholesale markets, together with a stable, low interest rate climate, allowed banks to tap into new sources of funds, mainly at short maturities. As funds dried up during the financial crisis, and investor appetite for exposure to unsecured bank debt has remained subdued since, banks have increasingly resorted to collateralization to furnish their funding needs. This paper has considered one aspect that changing bank funding patterns may impact upon, namely the provision of credit to bank borrowers. It has coupled this in particular to the impact of capital requirements, as the interaction between the rising regulatory burden on banks and the credit market has been at the center of policy debates. The key findings, that wholesale funding raises the impact of capital requirements as compared to retail funding, and that the collateralization of loans to banks can expand credit rationing, have not been related to the macroeconomy or to welfare in our model. But we believe that our results can help raise awareness that links between bank funding modes, capital requirements and the credit market exist, thereby enriching the policy debate. And to the extent that the prevention of credit rationing is a valid policy goal in its own right, our model would provide some policy implications, indicating for instance that there may be value to protecting a functioning unsecured funding market for banks, as an alternative to collateralized funding. Promoting a larger retail deposit base would then also be an interesting option, especially at times that capital requirements are rising.